Asus has packaged their micro-ATX version of the Ivy bridge chipset in an identical manner to other form factor boards, save the 'M' indicator in the product name. The front of the box, though plentiful in feature badges, is cleaner than the reverse side that is occupied with text walls explaining the various features of the board to retail shoppers. 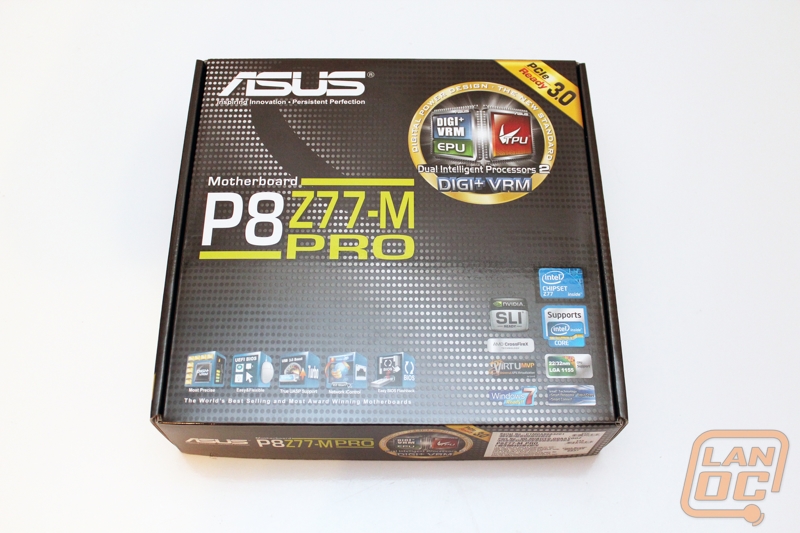 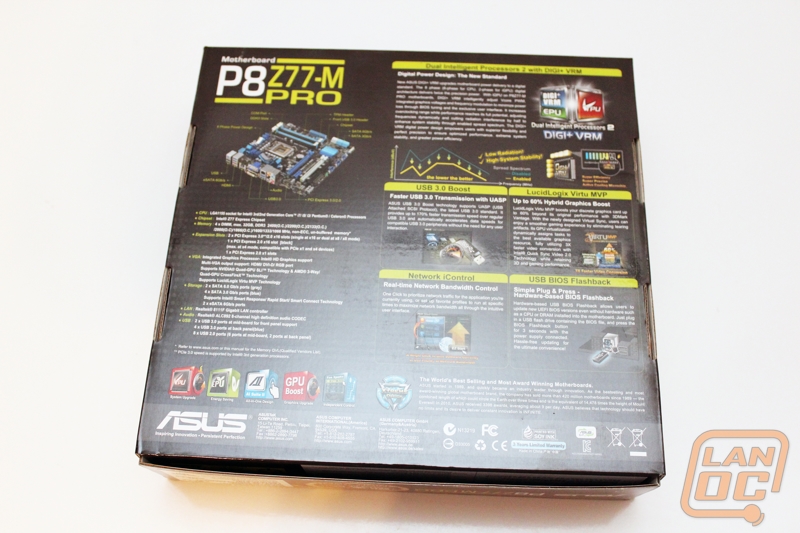 Opening the box clamshell style to find the board packed in anti-ESD bagging, and the typical array of board accessories: four SATA cables, SLI bridge, rear I/O plate, and manuals. Asus has included two Q-connectors, an accessory we've seen before in packages such as the Asus Maximus Gene V. The is a stand-off pin repeater that allows users to properly pin the front I/O outside of the case and insert on the pins on-board, instead of trying to do so after the board is mounted in the chassis. 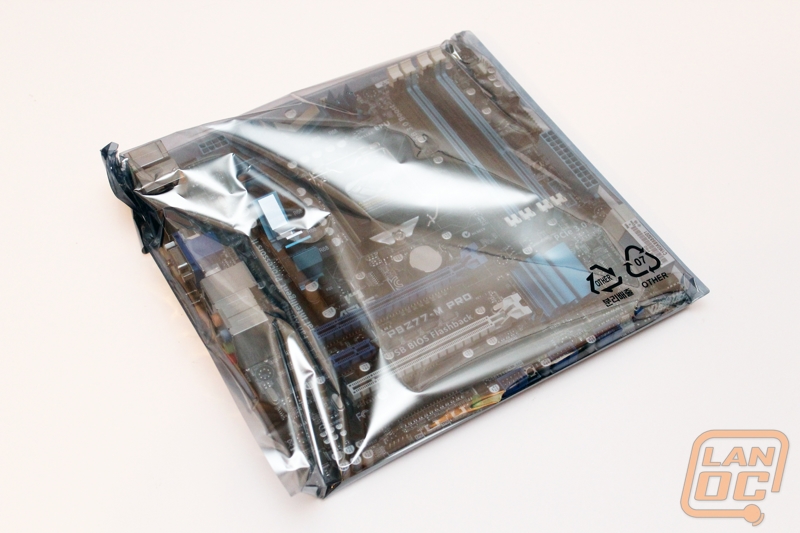 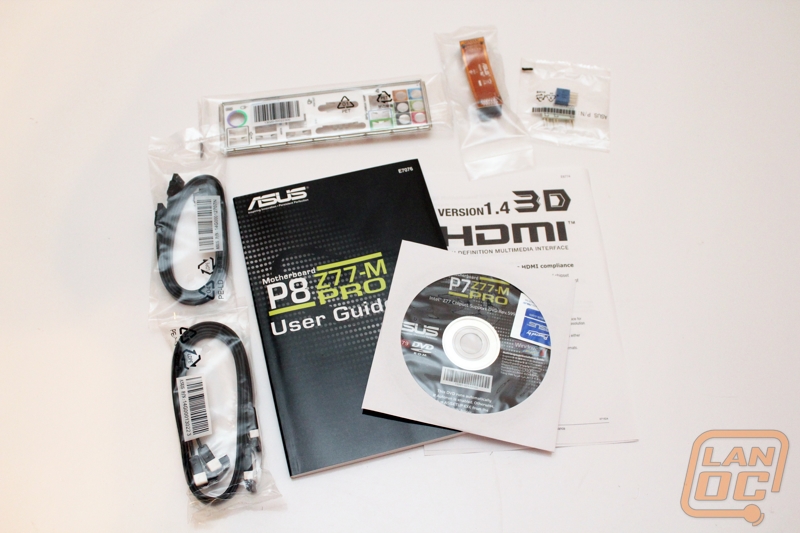 It’s obvious from a quick look over of the board that the P8Z77-M Pro is part of Asus' mainstream line. The general layout is pretty standard, as well as the black and blue color scheme that Asus uses on their standard boards.

Taking a closer look around the board, the eight pin power lies in the typical upper left hand corner. 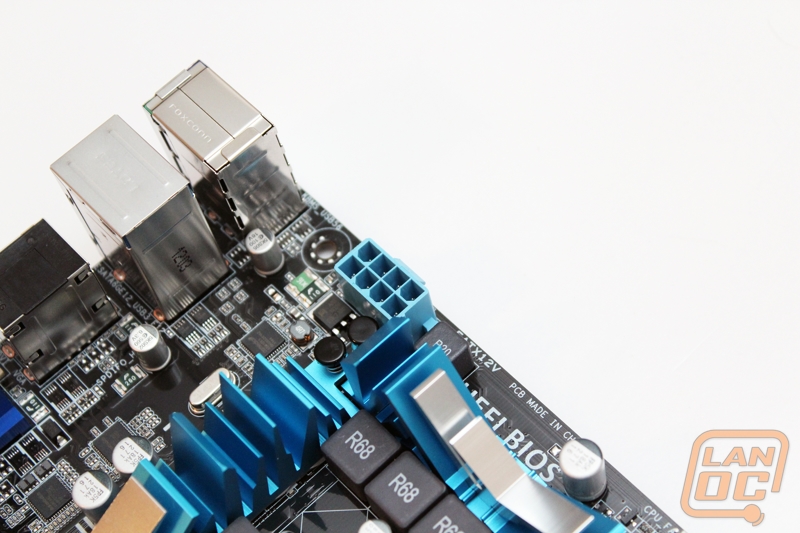 The lower left corner is equipped with four PCIe lanes in the order listed below: 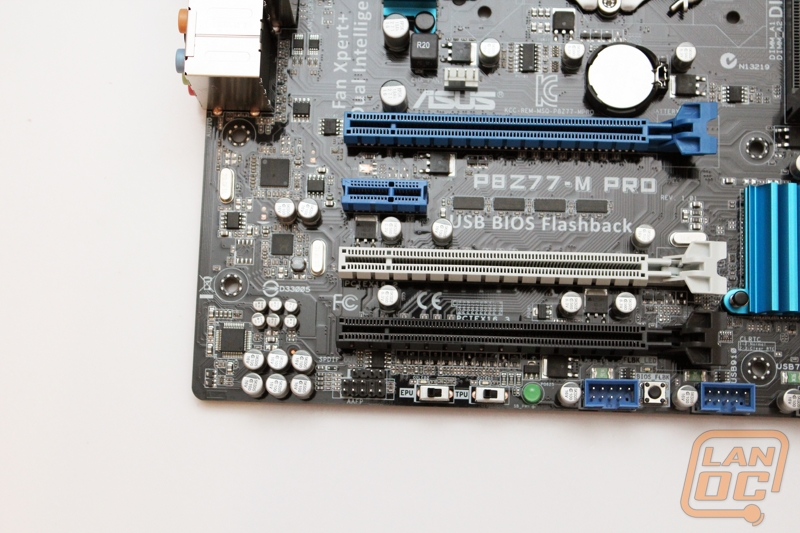 Notable here is the exclusion of straight PCI, which seems a bit odd for a mainstream board. Keep in mind that board's form factor, and that Asus wanted users to be able to run any PCIe card as well as have the resources to run dual card setups. Regardless, with a board that is target for general users, the need for a PCI device may exclude the P8 Z77-M Pro as a possibility. Also notice that the lanes are situated in an order that allows the installation of dual card set-ups without the worry of larger shrouds blocking the pin-outs below, such as the USB headers.

Speaking of that header row along the bottom, you'll see two switches labeled 'EPU' and 'TPU'. These are part of Asus' auto tuning functions, both serving quite a different role. When the EPU switch is on, the EPU chip initiates an energy efficient mode, which monitors the current needs of the system and automatically tuning settings based on loads and power use. The TPU, on the other hand, safely tunes both graphical and central process units with safe clock speeds, with the ability to tweak frequencies with TurboV, a GUI overclocking tool. 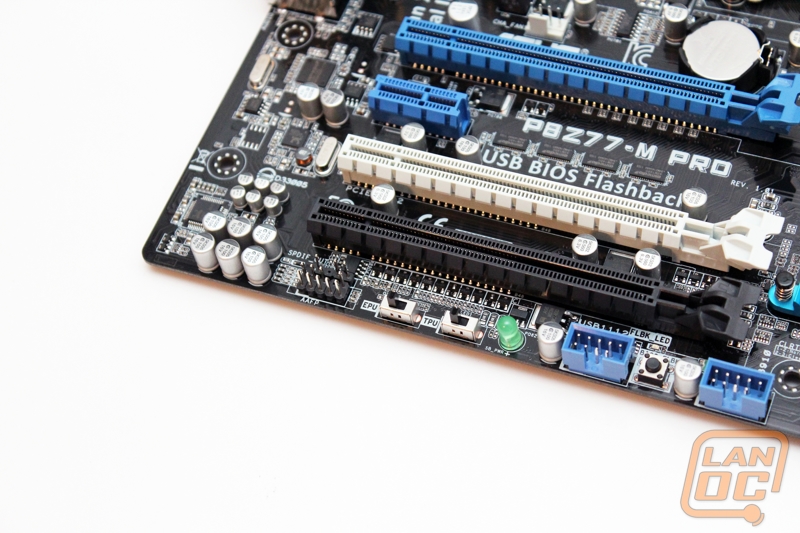 Following to the right are three USB 2.0 headers, with a flat button labeled 'BIOS_FLBK'. This button is used in the USB BIOS Flashback feature, which allows users to update the BIOS in a much simpler manner. If the button is held for three seconds with a connected power supply and a USB drive containing the BIOS update, the BIOS will update without any further input.

The header collection in the bottom right hand corner begins with the first of three chassis fan connectors, all of which are the PMW four-pins. This is important because that forth pin allows RPM control of the fans based on current load, which results in quieter performance of the system overall. This also allows the energy-saving EPU to reduce the fan speed when not needed. The corner is finished with the front I/O panel pin-out. 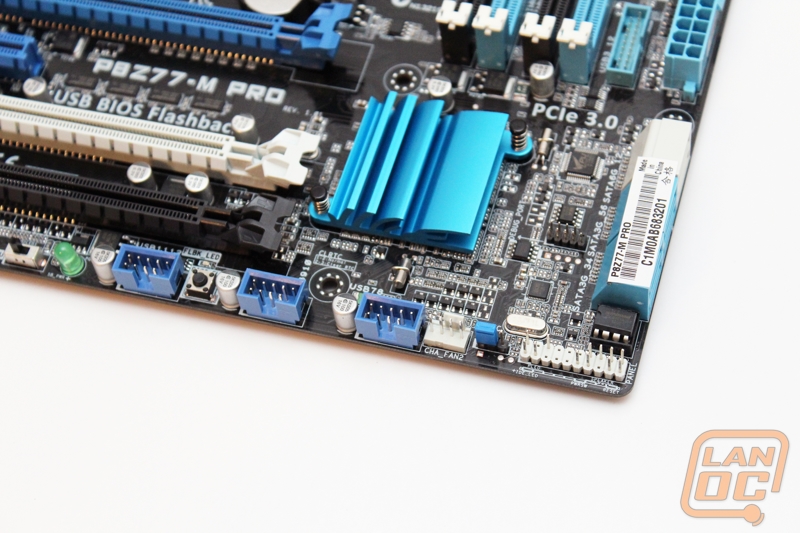 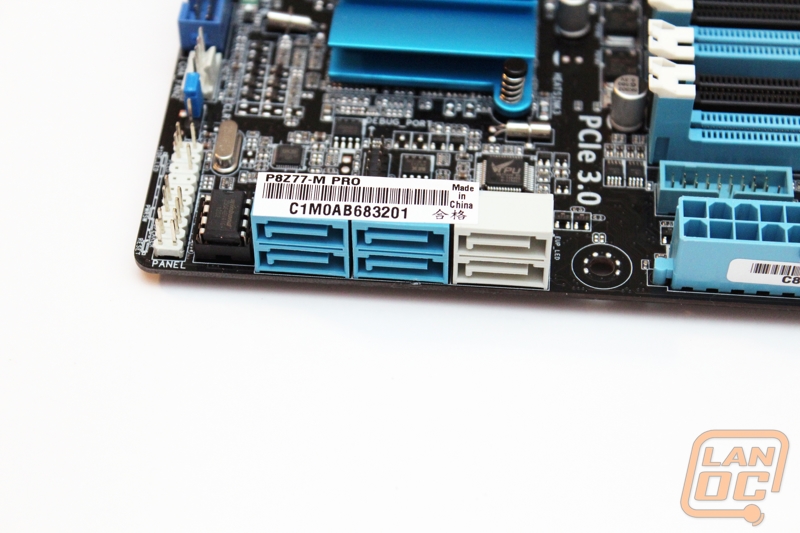 Following up the right side of the board we continue past the 24-pin power connector, neighboring the TMP (Trusted Platform Module). Though many end-users will never give this interface a second thought, it is nice to see the specification supported for the corporate users. Set between the main power and the RAM lanes is the USB 3.0 header, also controlled by the chipset. The eastern border is finished with another four-pin fan header in the corner, catty-corner of the COM port. 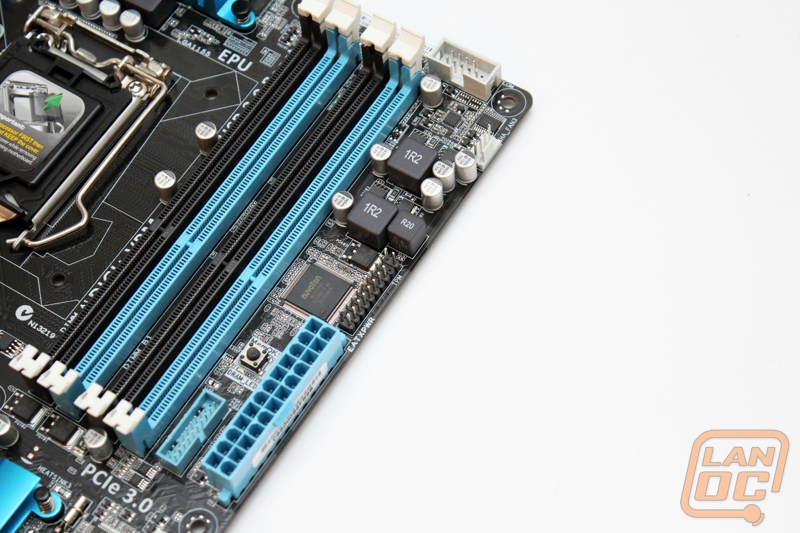 Next is the Optical S/PDIF out port, below which is an HDMI port. The video output continues with VGA and DVI single-link, the network and mentioned remaining USB 3.0 ports follow. Interestingly, the LAN controller isn't Intel as we've seen in the past. The Gigabit LAN is accomplished using the Realtek 8111F controller, which isn't quite as good as quality as the Intel counterpart. The audio next door is also controlled by Realtek, featuring six jacks and 8-channel high definition audio. 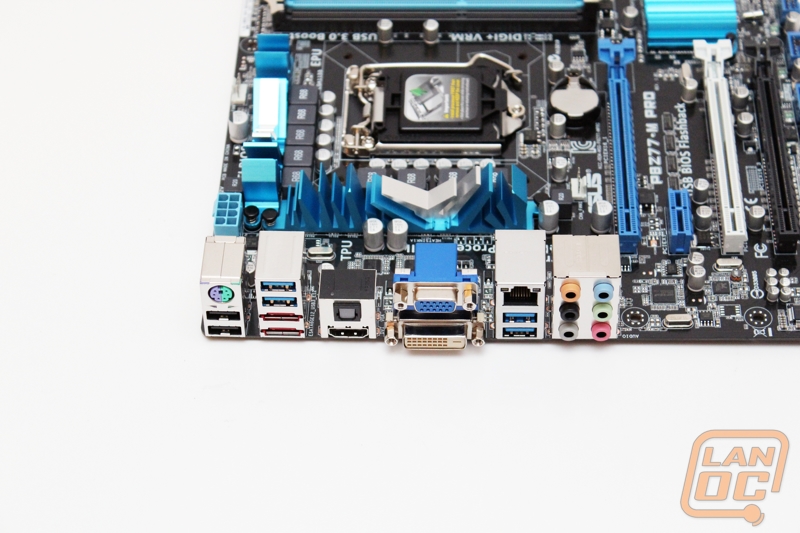 Nothing special going on around back on the P8Z77-M PRO other than its black PCB. This is always nice to see. 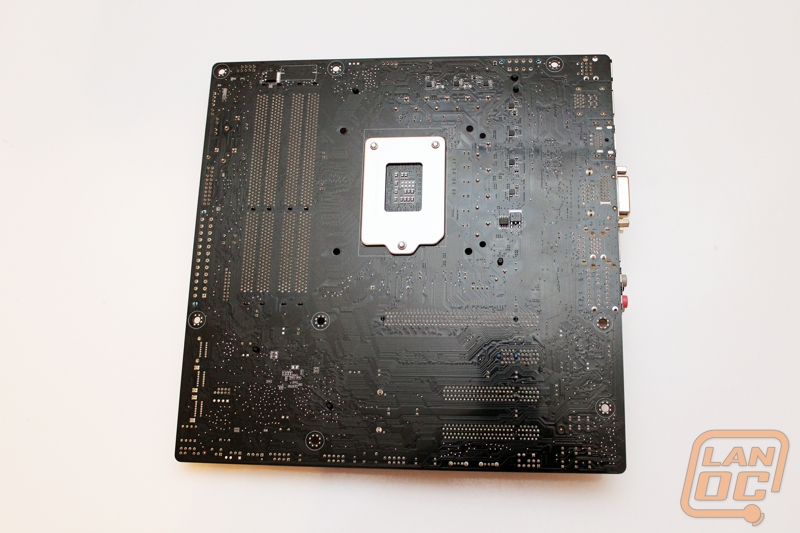 Cooling for the P8Z77-M Pro is similar to what we saw on the P8Z77-VPro but a little smaller to go with the boards smaller form factor. Because of the more compact design they went with a more aggressive heatsink design for the power circuitry that helps provide good cooling surface area. Like with all Asus Pro boards all of the heatsinks are aluminum with a blue anodized finish. This time around they styled up the power circuitry heatsinks by leaving a few fins silver. The design actually looks like dominos falling over. In our testing we had no heat related issues with both the power and chipset heatsinks and due to the lack of cooling fans there is no noise to deal with as well. 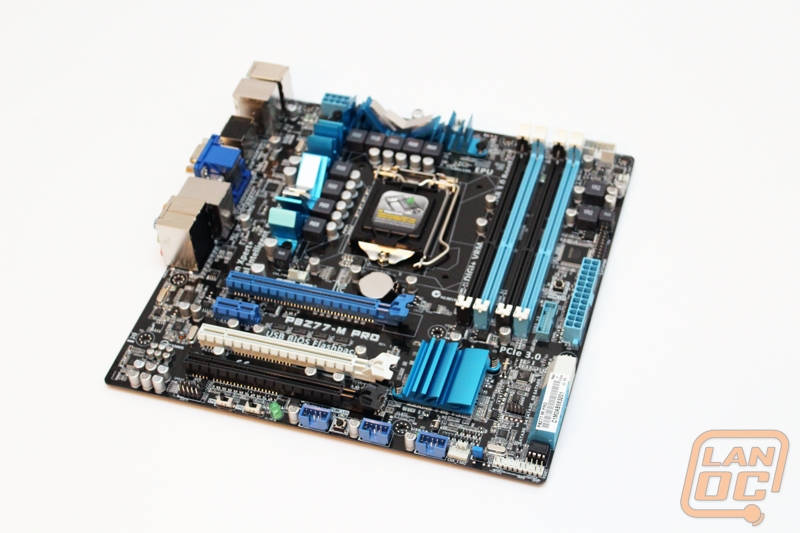 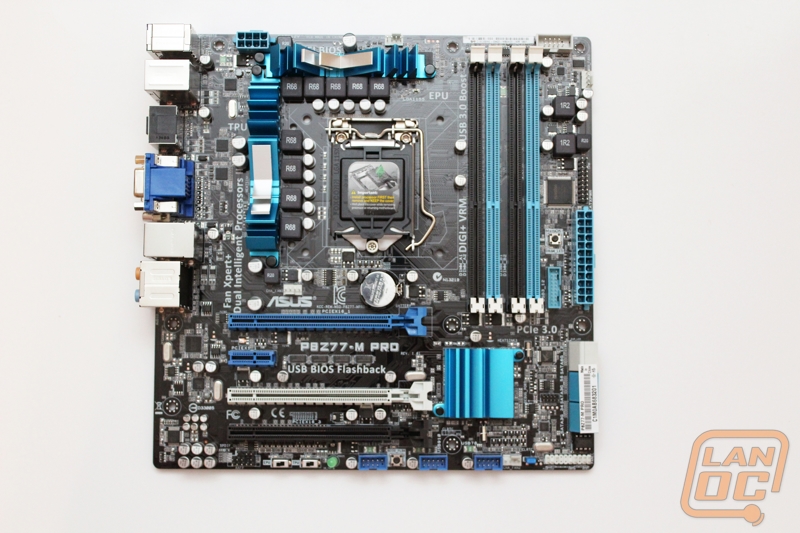 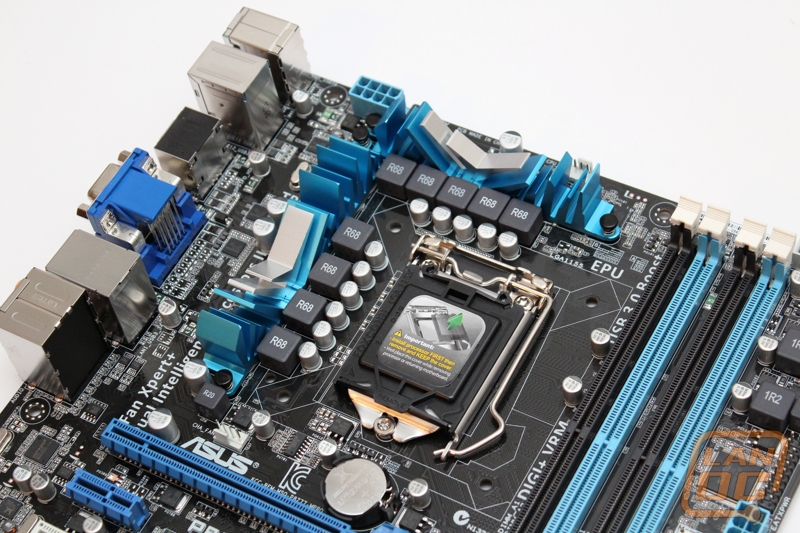 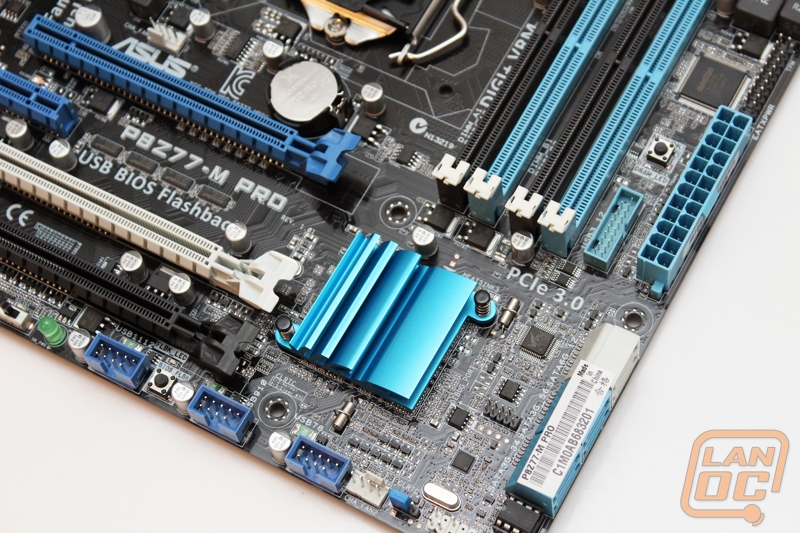 We have 1778 guests and one member online