Taking a look at one motherboard is an undertaking in itself let alone four different boards. These reviews were planned to be all split up but after seeing the benchmark results and how close they all were I just couldn’t put you guys through reading the same thing four times. Frankly the results from benchmark to benchmark are repetitive enough. I was actually blown away that the performance numbers were so consistent. Normally I could retest the same board 5 times in a row and get different numbers each time. It really says a lot about Asus's quality control that I was able to replicate the same numbers over and over again between four different motherboards.

Beyond just the results, Asus continues to amazing me with how many features they manage to pack into all of their boards from budget to high end. Whenever possible they pack in things like countless 4 pin fan headers and Intel NIC’s. These features all add to the total manufacturing costs of their boards but they somehow still manage to be competitive on pricing 9/10.

After taking a look at all of these boards there is no way I could recommend just one for someone to buy. Even though the benchmarks are the same each board stands out with different form factors or feature sets that help focus each one to a different user. For example, the Maximus V Gene and the P8Z77-MPro are both the same form factor, but with the additional cooling, more detailed BIOS, and upgraded audio card I would never recommend it to a normal user, but it would be my first choice to someone who knows how to manually overclock and game to take advantage of its features.

My personal favorite is the P8Z77-I Deluxe, its Mini ITX form factor would normally hold it back with both features as well as overclocking but they managed to pack almost everything into that small board while also giving it the power needed to run with the big boys while overclocking. 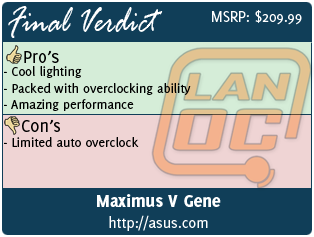 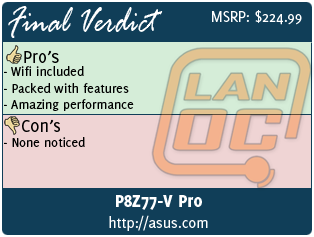 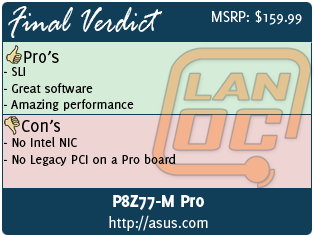 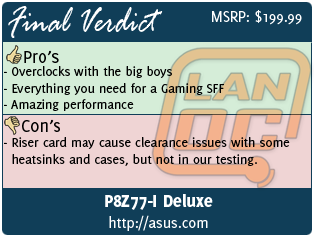 You might call him obsessed or just a hardcore geek. Wes's obsession with gaming hardware and gadgets isn't anything new, he could be found taking things apart even as a child. When not poking around in PC's he can be found playing League of Legends, Awesomenauts, or Civilization 5 or watching a wide variety of TV shows and Movies. A car guy at heart, the same things that draw him into tweaking cars apply when building good looking fast computers. If you are interested in writing for Wes here at LanOC you can reach out to him directly using our contact form.
Discuss this article
Log in to comment
Posts in discussion: Asus Z77 Roundup

We have 1392 guests and no members online