As a regular Android user for years, adjusting to iOS took more time than it normally takes when adjusting to a new phone. I had to get used to all of the different OS quirks and navigation commands and also find comparable apps to what I use on Android. That said, after a few weeks I was just about completely adjusted. From there I’ve been using the iPhone 7 every day, taking it with us on trips and to events using it as our navigation, communication, and camera. In that time and with our performance benchmarks I was really impressed with the 7’s performance. Day to day performance was always smooth and seamless but it was the benchmarks that really set the iPhone 7 apart from the high-end Android handsets I’ve recently tested. I also really liked Apples overall software ecosystem, especially with apps like Garage Band that competitors don’t have anything that compares. Most aren’t apps that I would use day to day, just like with Samsung’s apps, but I can completely see why someone who does use them every day would never want to jump over to Android.

The best part of the iPhone 7 to me though is the overall build quality. I’m a big fan of premium handsets and the iPhone 7 holds its own with all of them. The aluminum construction is solid and it seamlessly integrates with the glass front. Speaking of the front, I was especially impressed with the front facing camera and its higher resolution. Given the popularity of selfies, having a quality camera is really important but most Android handsets all seem to just stick with the same front facing cameras.

As for the issues, I had with the phone. The main issue was with just how slippery the iPhone 7 felt in hand. I nearly dropped it more times than I could count and it was always the first thing that anyone would mention when I handed it to them and had them check the phone out. The rounded edges feel good in hand but don’t give you any traction, especially with the satin finish. Beyond that, I did list the rear facing camera. I don’t think it is a bad camera at all, but given the iPhone 7’s price and past iPhones cameras I had high expectations and in the end it did its job but didn’t stand out. The lack of a headphone jack is also in my cons even though it didn’t effect me at all. Apple does include a pair of headphones with a thunderbolt port and the adapter but we still know how much people were upset.

So is the iPhone 7 a good phone to pickup? As a heavy Android user could I see myself jumping over to the other side? For me, I can see myself seriously considering the iPhone 7 Plus due to its better rear facing camera as a high-quality camera is one of the biggest things I look for in a phone. Beyond that, I think that iOS and Android are on par with each having their own pros and cons. Android has continued to grow in popularity because of the choice it gives you in picking out a phone and that I do like. That said the iPhone 7 is a great phone for anyone who wants a simple to use device that is just going to work. Being an iPhone the accessories options are crazy as well. That said, I’m not switching over anytime soon enough though the iPhone 7 Plus is very tempting. 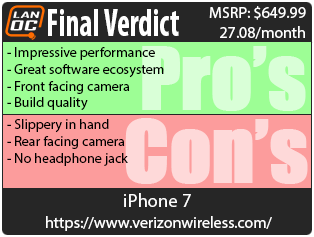 You might call him obsessed or just a hardcore geek. Wes's obsession with gaming hardware and gadgets isn't anything new, he could be found taking things apart even as a child. When not poking around in PC's he can be found playing League of Legends, Awesomenauts, or Civilization 5 or watching a wide variety of TV shows and Movies. A car guy at heart, the same things that draw him into tweaking cars apply when building good looking fast computers. If you are interested in writing for Wes here at LanOC you can reach out to him directly using our contact form.
Discuss this article
Log in to comment
Posts in discussion: iPhone 7

We have 1123 guests and no members online