Our performance testing is broken up into three sections; we are going to look at the phones actual performance, the software, and then how it all goes together as an overall experience. Together we hope you will be able to get an idea of what to expect from the Samsung Note 2.

Starting with actual performance, we went through a few different benchmarks trying to cover each aspect of the Note 2’s performance. We did the same testing on the Nexus 4 and the Nexus 7 as well to give you an idea of where it stands. You can actually do each of the tests yourself if you would like on your current phone to see how it compares.

Our first benchmark is an overall benchmark that is browser based for easy testing on any device called BrowserMark v2. The name may sound familiar to those of you who have seen our CPU benchmarks; we run other tests from the same company Rightmark. Browsermark v2 runs through 2d and 3d benchmarks, WebGL benchmarks, Javascript benchmarks, and general benchmarks that test web page resizing and load times. Put up against the Nexus 4 and the Nexus 7 the Note 2’s performance was very impressive.

Octane V1 is a JavaScript benchmark created by Google. The benchmark goes through a whole selection of real world JavaScript tests ranging from OS kernel simulations to tests involving how quickly PDF’s can be rendered. The list of tests ran is so long that I highly recommend everyone take a look at the link above to check them all out. Once again the Note 2 stood out against the other devices tests. I suspect that the results from the Nexus 4 are a little low due to it coming with a new version of the Chrome browser rather than the normal android browser, but out of the box the Note 2’s performance is impressive!

SunSpider is another JaveScript benchmark but what sets it apart is that it is designed to test the core JavaScript. It’s actually designed to test different versions of browsers against each other, but it is also a perfect way to see how phones perform as well. This is one of the only benchmarks that having the lowest result is a good thing; this is because it is measured in Milliseconds. Our results once again have the Note 2 way ahead. The Nexus 4 results are once again low for a quad core phone but most likely related to the different browser and rumored throttling at higher temps.

Our last three tests come from the GLBenchmark 2.5.1 benchmark suite. This runs through OpenGL testing to show how well a device will handle most gaming situations. Proving that our previous benchmarks before were affected by the Nexus 4 running on the Chrome Browser, the Nexus 4 was the star of both the fill rate and Egypt HD benchmarks. The Note 2 was also powerful but was a little lacking when it came to FPS in the Egypt benchmark. The last benchmark was the battery life benchmark and I was especially impressed with the Note 2 here. At over four hours the Note 2 outperformed the others considerably. This is especially impressive when considering the screen size especially. Obviously you will see much more than 4 hours of use, but this benchmark was putting the phone under full load with the screen on the entire time.

Moving on to the software, the first thing we need to address is what version of Android the Note 2 is running. The Note 2 came with 4.1.1 Jelly Bean, so it is up to date for the most part with the Nexus 4 we put it up against sporting 4.1.2 that is also called Jelly Bean. The Note 2 is running a few modifications from Samsung as well, mostly features that can also be found on the popular S3, but there are that are specific to the Note 2’s S Pen as well.

The Note 2 specific software like S Note make the Note 2 much more than a normal phone. You have the ability to draw, write, type, add photos, add graphs or anything else needed to take your notes. I tossed together a quick example here including a photo I took while putting it all together. As you can also see, you have multiple options when writing or drawing. You can pick from a pen, multiple brushes, a pencil, and even a highlighter. On top of that you can adjust the thickness and colors as well. 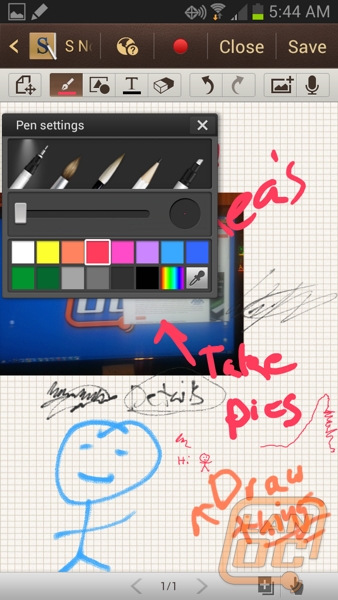 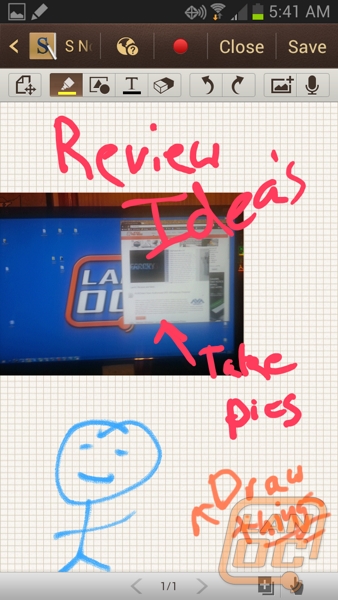 One of the other S Pen features is the ability to press the button on the S Pen and cut out anything on your screen at any time. I cut out the LanOC logo on my home screen as an example. Once you cut out something you can add it to your notes or even edit things together. This is perfect for cutting out someone else’s head and putting it on a different body for example. 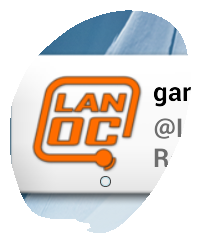 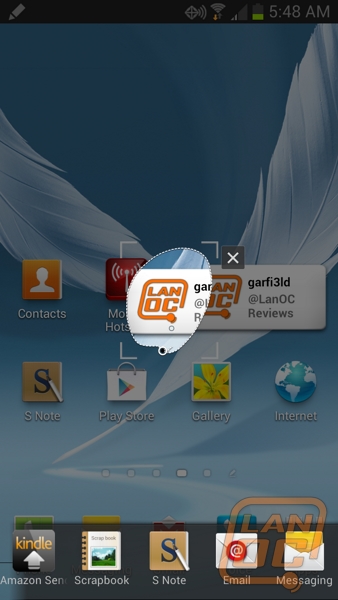 A quick side note as well is that when you have the S Pen out, you have a shortcut listing on the notification panel. 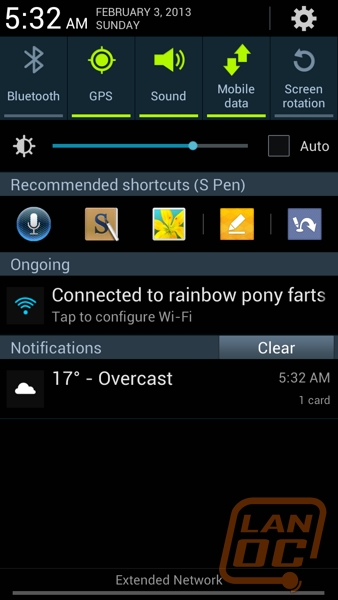 The performance of the Note 2’s 8 mega pixel camera was hit and miss. I found the low light and inside shots to be darker than I would prefer and a little blurry. I took the picture below inside but in my office with four 100 watt lights making it more like an outside photo. Outside and high light performance was great though. 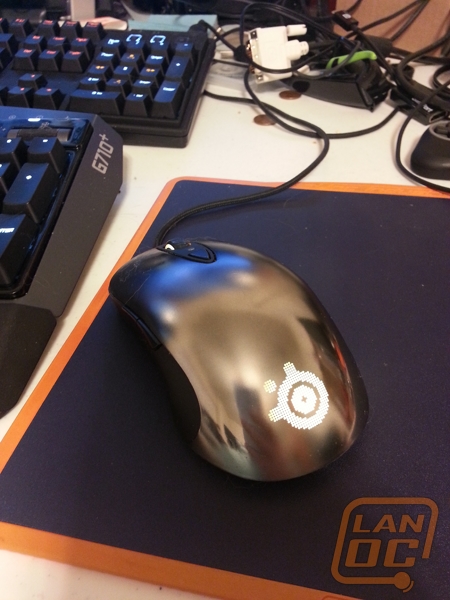 So we know about the software and the phones benchmarks, but how does it all go together? The biggest adjustment going to the Note 2 will be its size. There aren’t many phones that even come close to the size of the Note 2 and frankly when you put it next to a normal phone it looks huge. As a fairly big guy I found the Note 2 to feel a little on the large size, but a very usable size. Where the size does affect things is when you try to use your phone with one hand. Even holding the phone and trying to drag the notification bar down to check your messages is a stretch with your thumb. With two hands using the Note 2 is great though, I found it to be a good mix between a small tablet and a phone.