I’m sure a lot of you are up in the air with the Note 2, its size really limits the market. The truth is, Samsung has the Galaxy S3 for people who don’t want/need a larger device. The Note 2 fills in a hole in the market that other manufactures have ignored. Some people, like me, love the idea of a phone large enough to take the place of my tablet. Not having to carry around multiple devices is great. Not only does the Note 2 fill that hole in the market, it also does a great job of integrating the S Pen both into the hardware as well as the software integration. Even after spending a month with the phone I was still finding features that I never noticed before.

I love that Samsung is staying on top of their flagship phones like the Note 2 and the S3 as far as software updates. Generally I would much rather have a Google Experience Device like the Nexus 4 and the Nexus 7, only because I prefer to continue to get the updates. The additional software that Samsung packs into the Note 2 and there fairly quick updates combined make this a good option as well.

Although the model we tested was using Verizon, the Note 2 is available on just about every carrier with a price on contract that can be found for as low as $140 and no higher than $200. Considering the off contract price, these are great prices for the Note 2. If you are considering the Note 2, I would highly recommend getting your hands on the phone. There isn’t any question that it’s a fast phone packed full of features, but you need to make sure that the larger size is going to work for you. If you are considering the Note 2 for its stylus integration then you really aren’t going to find a better option on the market, nor would you want a smaller phone.

Pricing as of our review (on contract) 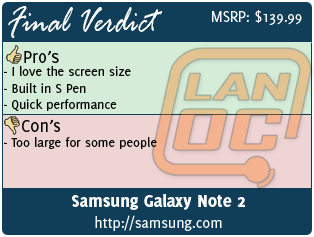