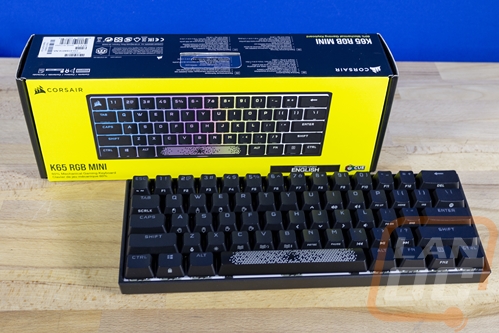 Corsair getting into the 60% keyboard market with the K65 RGB MINI 60% is exciting because Corsair seems to bridge the gap between gaming and mainstream and I’m excited for smaller keyboards to not be some crazy niche product that people think is weird for you to have. To me at least, I feel like there are a lot of people who just don’t have any need for a full-sized keyboard. I feel the same way when it comes to ITX builds, most people don’t have any need for more than one PCIe slot. But with keyboards so many people never use their number pad and if you aren’t using it it’s surprisingly nice to have the extra desk space and being able to move your keyboard over closer to your mouse can be more comfortable as well.

With that said Corsair did a great job getting into the market for their first time. The K65 RGB MINI 60% is built with quality components like the genuine Cherry switches and I love that they went with PBT and doubleshot keycaps. That alone will make a huge difference in the longevity of the board. But because they stuck with the standard layout you do have the option in the future to swap to other keycaps if you want to change up the look. You can get the K65 RGB MINI 60% in black or white and they have Cherry MX Red or Speed options but no tactile Keyswitch option sadly. Corsair’s iCue software gets the job done and I like the layout of the newer version but like with past versions I have had it be a little buggy from time to time. Thankfully once you get things figured out the K65 RGB MINI 60% does have onboard memory so you don’t have to even run the software if you aren’t making changes.

I was hoping that Corsair would go with something like their signature bezel-less design but the K65 RGB MINI 60% does at least have thin bezels that make the design compact. It has a detachable cord and uses Type-C which is nice. The included cord isn’t too bad as well with a nice sleeving and the Corsair-specific rounded plugs on the ends. I also like that they included legends printed on the sides of the keycaps to help people find the keys hidden in the function layer.

Now I do think there is room for improvement with the K65 RGB MINI 60%. The thin bezels in the plastic case were nice but I did find the edges on those to be sharp and uncomfortable if your hands in up in those areas. Really like I said before a nice corsair bezel-less design with an aluminum case would have been nice. The plastic case feels cheap and extra weight is always nice for a keyboard. This may have contributed to the slight “pingy” sound when typing that I experienced. While I love the doubleshot keycaps, I do think that some people aren’t going to like the font that they went with which looks very “gamer”. A cleaner font would have been easier to read and looked better in my opinion. I also don’t like that the spacebar that they preinstalled isn’t PBT or doubleshot at all when that is going to be one of the first to wear quickly.

Overall the K65 RGB MINI 60% comes out middle of the road. It has a lot of great features combined with a few cost-saving things that hurt the overall experience. I’m glad the K65 RGB MINI 60% is out and I hope it opens new people up to the compact keyboard life but there is also room for improvement in the future. It has an MSRP of $109 which is a little higher than I think it is worth. But it can be found on Amazon normally for around $95 which is more in line with where it should be. 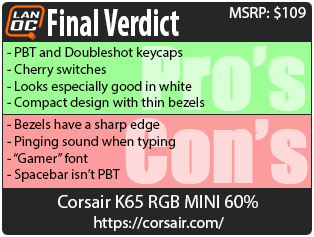 You might call him obsessed or just a hardcore geek. Wes's obsession with gaming hardware and gadgets isn't anything new, he could be found taking things apart even as a child. When not poking around in PC's he can be found playing League of Legends, Awesomenauts, or Civilization 5 or watching a wide variety of TV shows and Movies. A car guy at heart, the same things that draw him into tweaking cars apply when building good looking fast computers. If you are interested in writing for Wes here at LanOC you can reach out to him directly using our contact form.
Discuss this article
Log in to comment
Posts in discussion: Corsair K65 RGB MINI 60%

We have 1733 guests and one member online