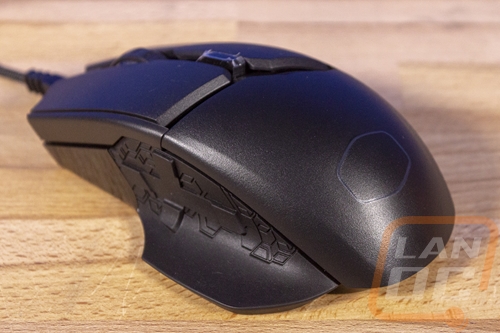 Well its finally out, the MM830 was teased almost a year ago and then nothing. But it looks like Cooler Master hasn’t been just sitting on it, they have been working on the design. Now I will be the first person to say that I’m not an active MMO player, but I did spend some time with the MM830 to get a feel for it. Cooler Master took the same PBT finish that I liked with their last few mice and carried that over to this design. The textured PBT design is going to hold up a lot better than the rubber finishes that a lot of mice use and PBT as a whole is a big improvement over ABS which will start to get glossy in no time. Add to that they went with quality 20 million click Omron switches and the 3350 optical sensor that is a tried and true solid sensor and you have the basics for a long lasting mouse. Not to mention the huge gliders that should help hold up, even on a hard mouse pad like I prefer.

The biggest surprise to me though was Cooler Masters Portal software. There isn’t really any good way to show in pictures just how improved it is when it comes to responsiveness, but it doesn’t feel like a skin tossed over an OEM program anymore. In fact it is right up there with Logitech’s software which I have always been a big fan.

Now one of the downsides to the MM830 is its weight, at 122 grams it does weigh a lot more than a lot of the newer mice. The only plus to its weight is when you compare it to the Rival 710 from Steel Series it weighs less and that does seem like the most direct competition given they both have screens. Speaking of the OLED screen, I really dig some of what Cooler Master was doing in their software and they do give you a few potential uses. But as a whole I just don’t think people will use it. The only use I would like is to be able to use it to program the mouse without the software and that is the one thing that you can’t do with it. I was also torn with the MM830’s lighting as well. On one hand they finally got orange perfect, it looks amazing. But I could do without the underglows and the DPI status LEDs are far too bright for my taste. I would fix that in the software but lighting is a little limited. You can’t for example set two different colors to the different LEDs. Which is a shame because the logo outline on the palm area could look really good with alternating colors on it. Hopefully that comes in a future software update.

So I really think that most people are going to prefer the other Master Mouse designs, but if the D-Pad design is what you are most interested in then Cooler Master does have the MM830 priced to compete with the Rival 710. It has an MSRP of $79.99 where the 710 has a $99.99 MSRP. Of course without the OLED screen that pricing could be a lot better IMO. 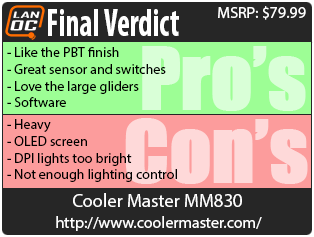 You might call him obsessed or just a hardcore geek. Wes's obsession with gaming hardware and gadgets isn't anything new, he could be found taking things apart even as a child. When not poking around in PC's he can be found playing League of Legends, Awesomenauts, or Civilization 5 or watching a wide variety of TV shows and Movies. A car guy at heart, the same things that draw him into tweaking cars apply when building good looking fast computers. If you are interested in writing for Wes here at LanOC you can reach out to him directly using our contact form.
Discuss this article
Log in to comment
Posts in discussion: Cooler Master MM830