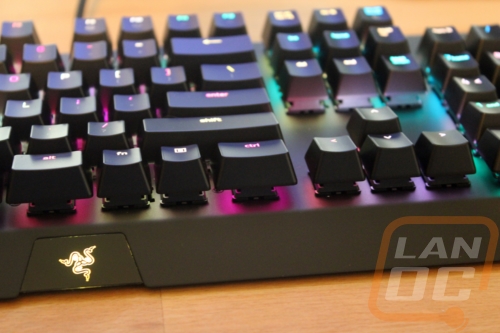 So like I said in the opening the Blackwidow X shares a lot with the other Blackwidows but they made a few major changes that you can see right out of the hole. For starters they dropped the macro keys over on the left side of the keyboard, so now the keyboard is a standard full sized keyboard. This helps cut out from of the extra width that “gaming” keyboards tend to have. The other big change is the Blackwidow X drops the plastic bezel that does around the top completely. So this makes it similar to the Corsair keyboards in the sense that they use the keyboards backplate that you attach the keyswitches to but extend the backplate all the way out to the edge of the keyboard. So the keys float higher up. This design is a lot simpler and in most ways is cleaner looking as well. Doing this also drops a lot of the plastic on the keyboard making it mostly aluminum. They still stuck with the same Blackwidow shape though meaning the angled bottom edge and the bottom left and right corners being cut at an angle. The keyboard does have a wider bezel width on the sides now compared to the original Blackwidow. All in all, the Blackwidow X is larger than keyboards like the Code and the new MasterKeys Pro L but smaller than most gaming focused keyboards now that they dropped the macro keys. 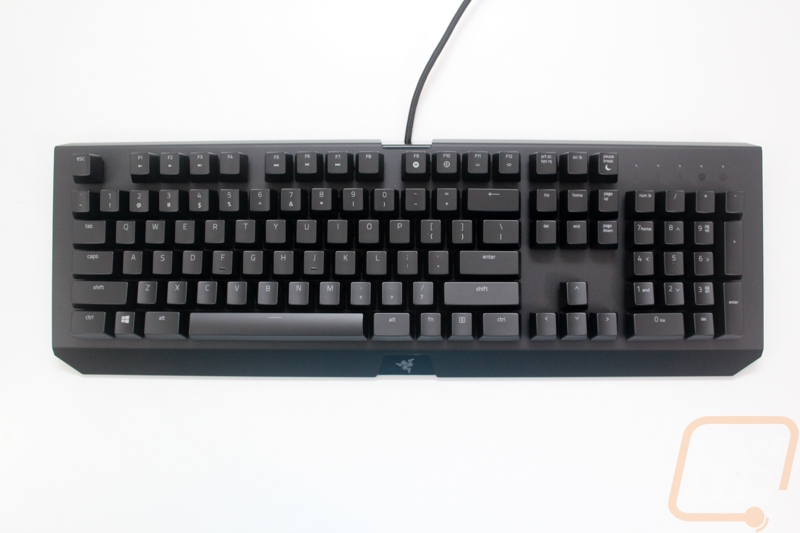 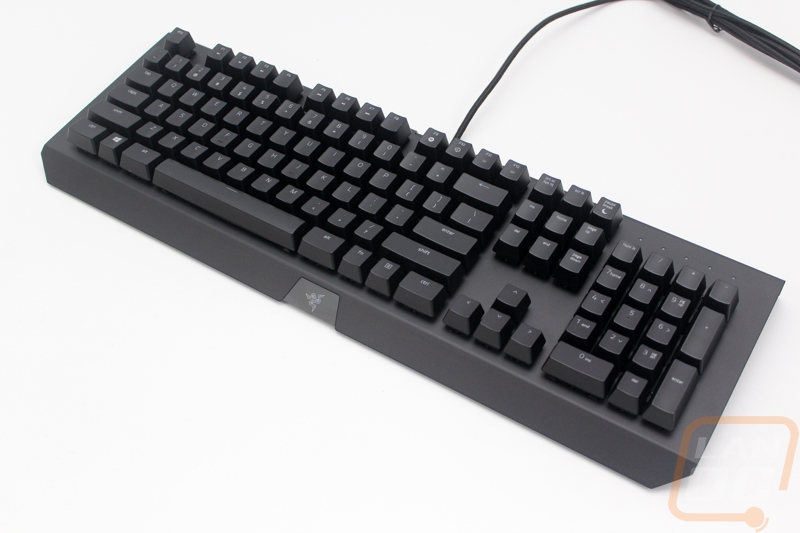 Even though they dropped the plastic bezel they did still manage to slip in the three headed snake logo down on the bottom. The logo is backlit like previous designs as well. 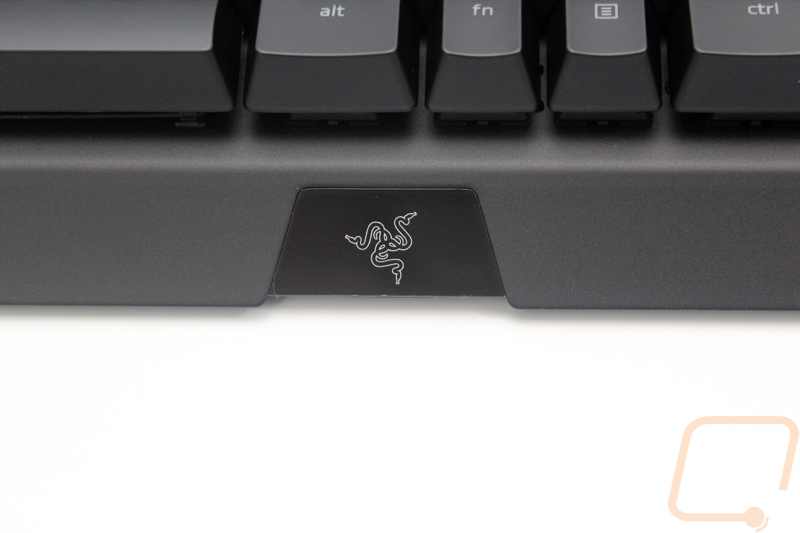 Razer also dropped that funky font they have always used as well for a simpler font. The keyboard is a full sized keyboard meaning it has a full number pad over on the right side and an F key row up top. All of the normal gaps separate each section as well. 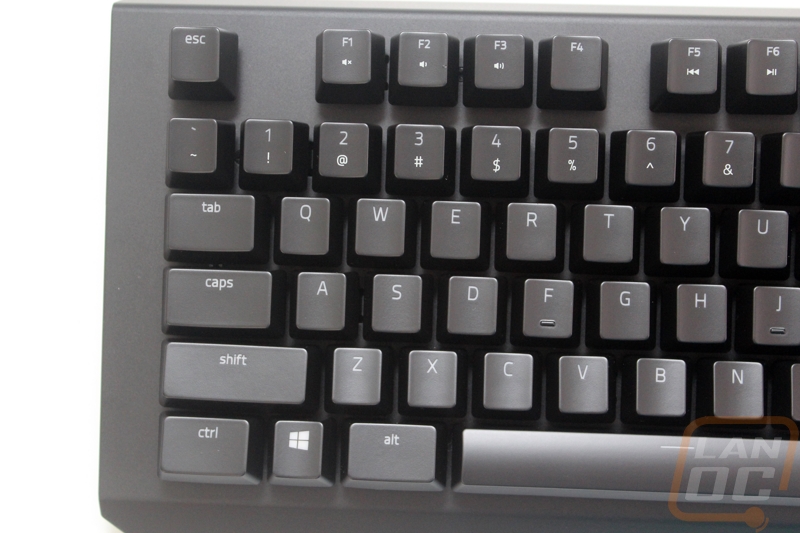 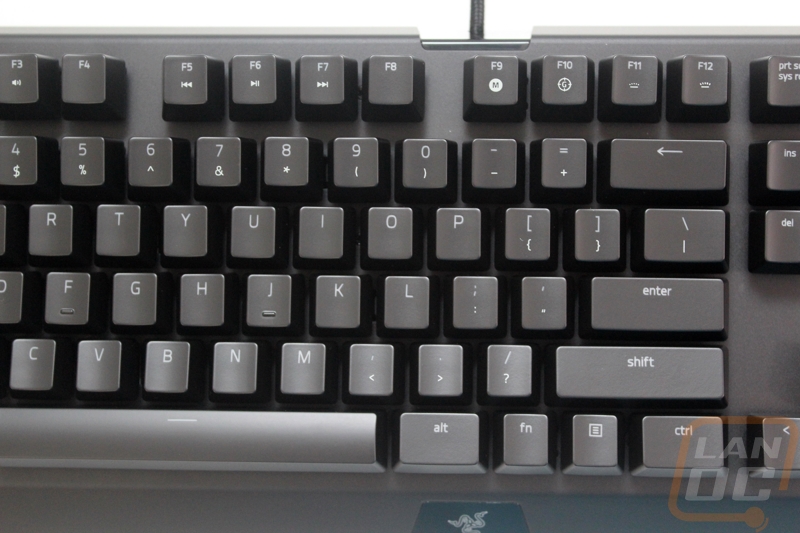 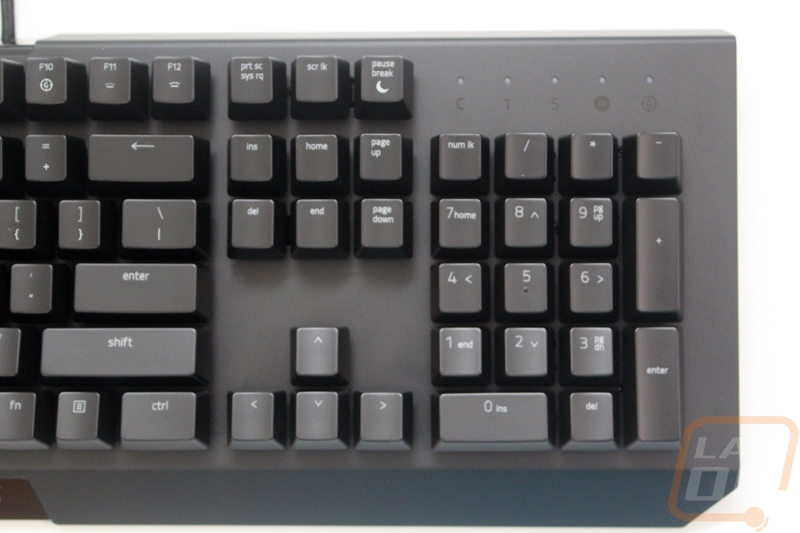 While most of the layout is completely standard the bottom row is not. Normally the Ctrl, Alt, and Windows keys will all be the same 1.25u size but for some reason Razer uses a single 1u key for Windows, Function, and Menu keys and then 1.5u keys for Ctrl and Alt. This also means the spacebar is a little shorter as well. It’s not the end of the world, but it does mean you can’t use standard keycap sets should you ever need to replace a key. 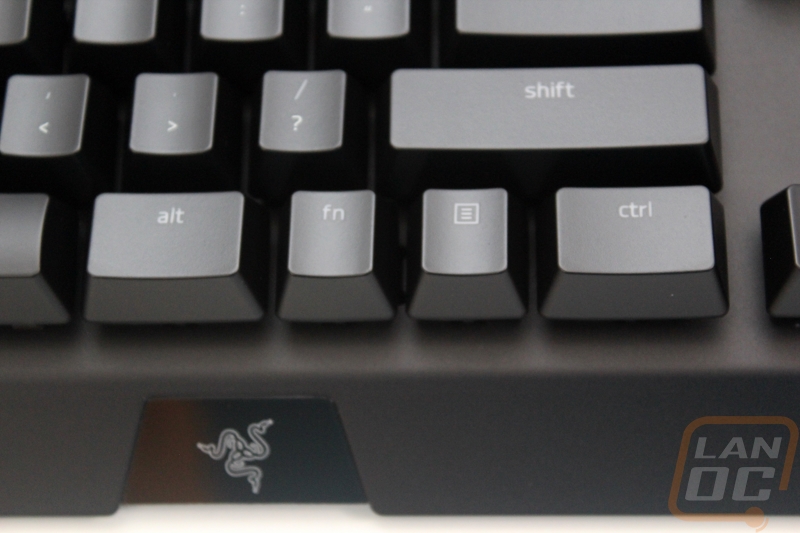 Like most keyboards these days the Blackwidow X does still have a few media and volume controls up on the F key row that use the function key. You get volume up and down and a mute bottom over in the F1 to F3 keys. Then you can play/pause and flip through tracks in F5 to F7. The F11 and F12 keys control the brightness setting on your backlighting. The F9 key is a macro record button. You can press function F9 and turn on macro record to record the macro, hit Fn+F9 again to stop recording then the next button you press will have the macro set to it. The F10 button puts the keyboard in game mode, this will disable the windows key as well as combinations like AltTab and Alt + F4 that can sometimes kick you out of game. 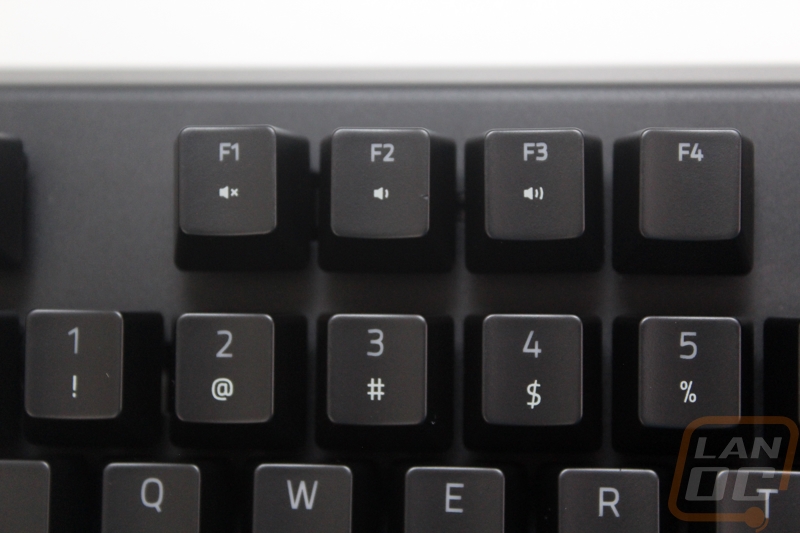 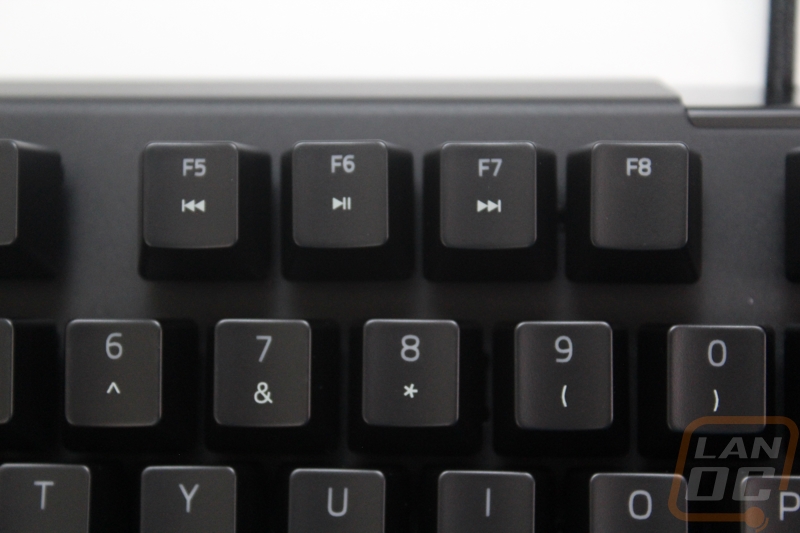 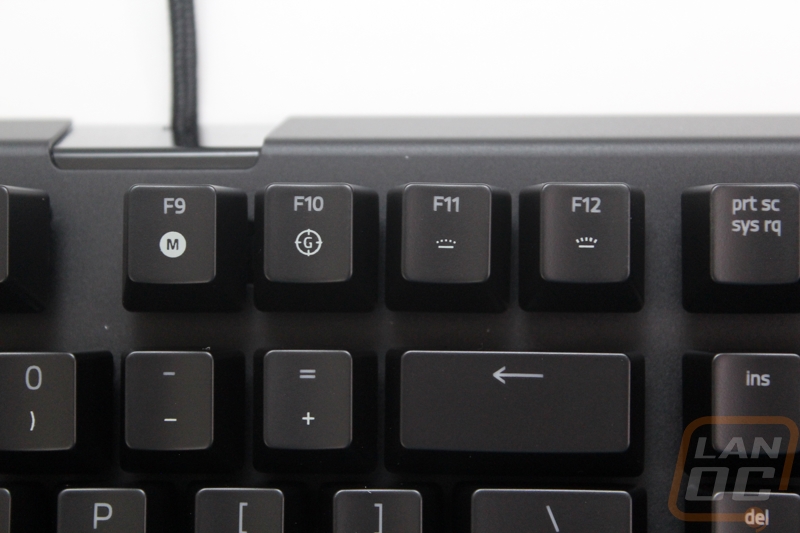 I’m loving the new look up above the number pad. Before with the plastic frame all of the lights above the number pad were large and the gaming was even in the shape of a target. Well with the aluminum frame they kept things simpler by drilling small holes for each LED and then putting a small black legend below. This design ends up being a lot cleaner. All of the LEDs are green with the exception of the macro mode indicator that turns on red. 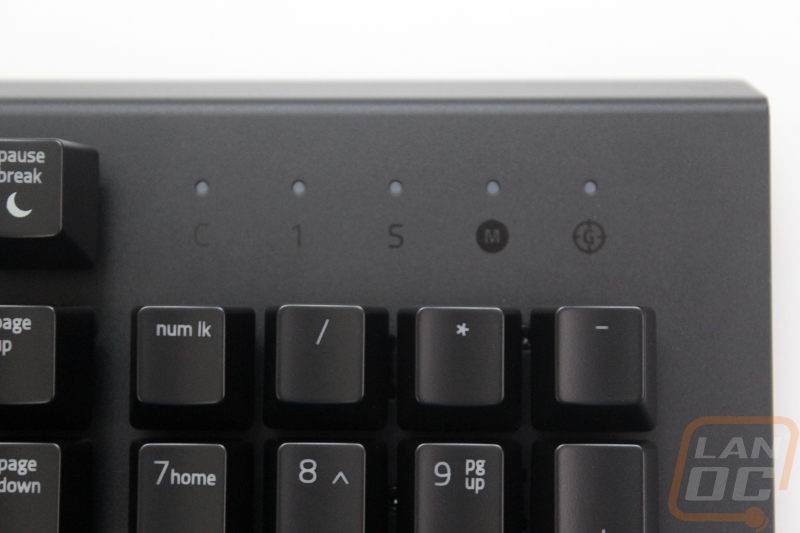 The side and back profile shots of the keyboard still share a lot with previous Blackwidow models. The back profile doesn’t have to much going other than the plastic bit in the middle where the cable can run out, beyond that the back just has the aluminum top bent over the rear. The side profile gives us a better look at the aluminum top though because it hangs over the edge about a ¼ inch. The sides also have a small hole for the cord to run out if you prefer. 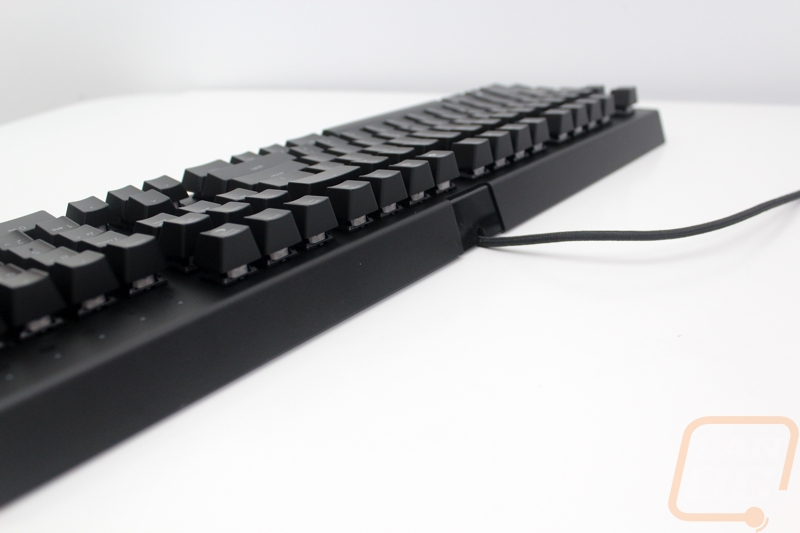 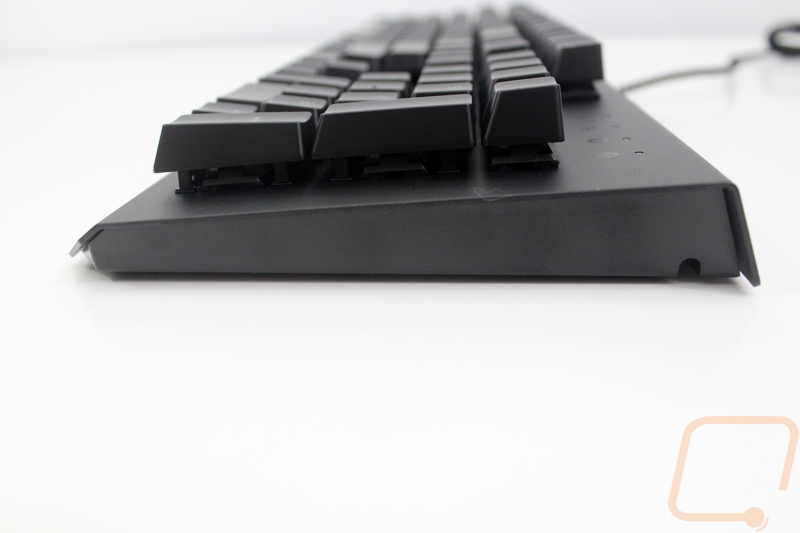 To get the Blackwidow X hooked up it has a USB cable that is about 5 feet long. It only uses one USB connection because there aren’t any USB pass-through connections. The cable itself is sleeved and a little thicker than a normal USB cable meaning it should have a thick rubber coating for protection as well. 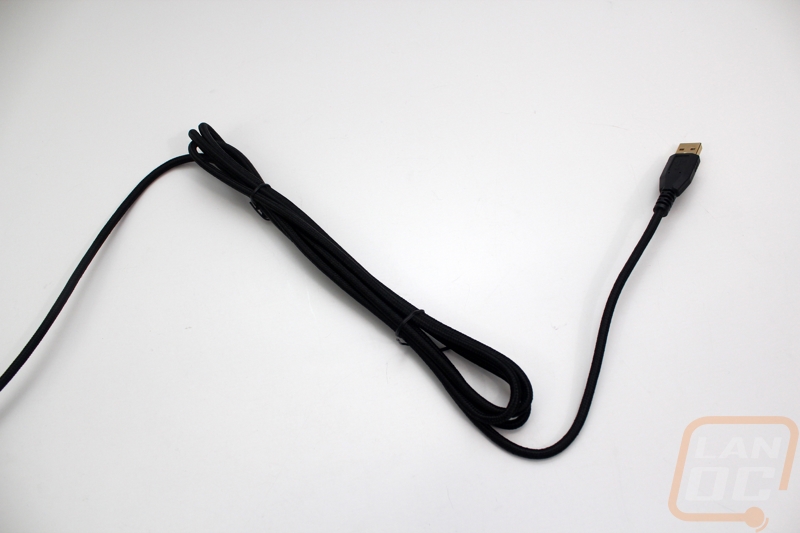 The bottom doesn’t continue the all-aluminum design, here we have plastic but that’s no surprise. The bottom has a large sticker in the middle for the serial number and all of the required logos from different certifications. The sticker is upside down for some reason, I’m not sure if that was just our sample or if they are all like that. Anyhow the cord runs out of a large gap in the middle and has tracks to run out both sides or the middle of the back of the keyboard. The design almost leaves room for them to do a detachable cord but the cord is permanent. For feet the Blackwidow X has three small feet along the bottom and two in the top corners to keep the keyboard secure when lying flat and then the two flip out feel have rubber on the ends as well for when you angle it. 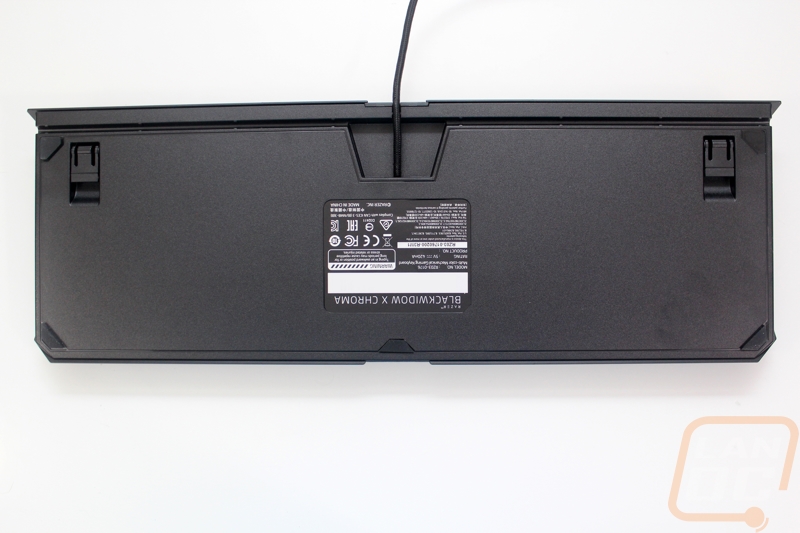 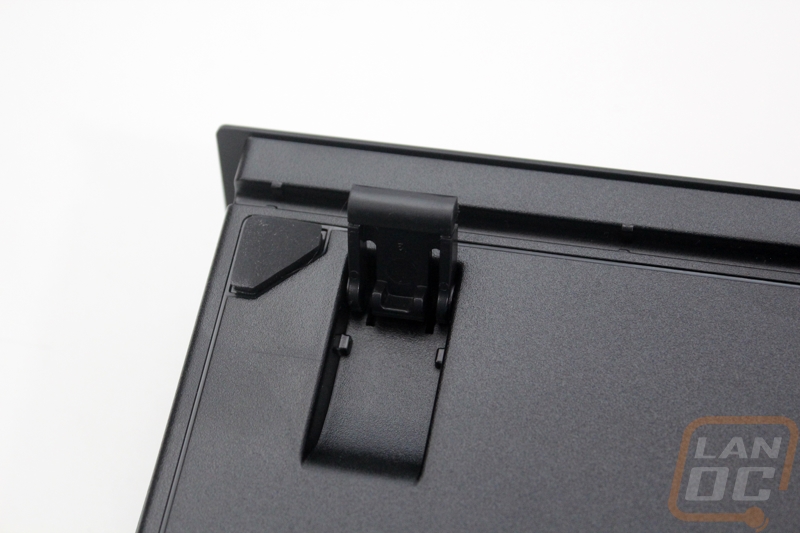 For switches the Blackwidow X comes with Razers green switch. This is their equivalent to the Cherry blue but it is designed to have a slightly shorter activation point. The idea behind this is an early activation point should give better reaction times for gamers. Personally I was a little bummed that the Blackwidow X had these switches only because the PR that originally announced the keyboard also mentioned Razer brining back Cherry switches to some of their keyboards and I originally read it as this keyboard having them. Performance wise most people won’t be able to tell the difference, but I know that the keyboard enthusiast market has been begging for a Cherry option back. For stabilizers the Blackwidow X uses a Costar style stabilizer but there were two things that stood out when I took a look. For one Razer went out of their way and even painted the stabilizer bar black to match the keyboard, given the no bezel design this is a good idea because the stabilizers can be seen from the side. That shows a nice attention to detail on their part. I also noticed that they did lubricate the stabilizer bars as well, a lot of manufactures don’t do this and it causes chattering. 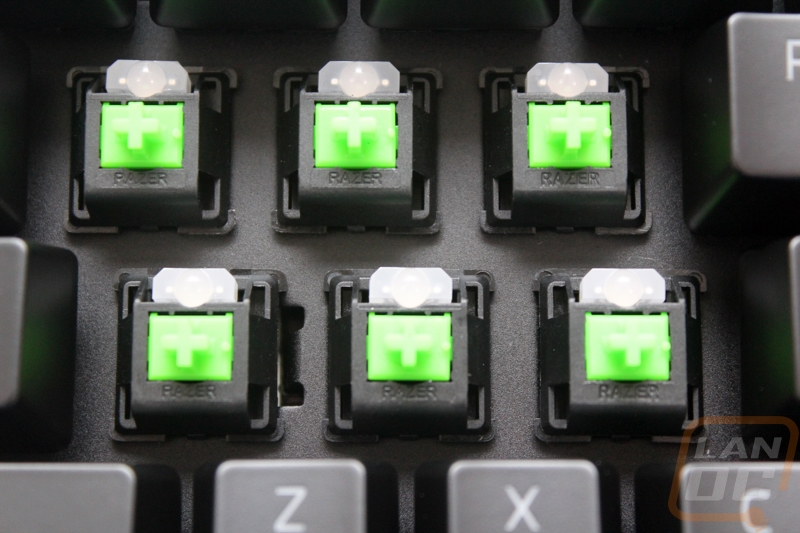 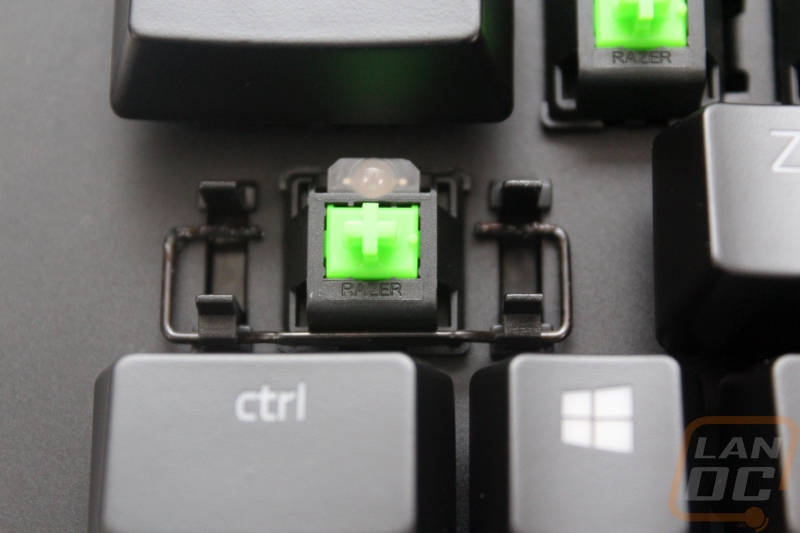 For keycaps Razer stuck with the standard thin ABS keycaps that every backlit keyboard uses. The caps are painted black and then they etch the legend on to the top. I will say however that I love that Razer went with a simple font for the legends, their old font was harder to read. The new font matches the clean styling of their board. When we check the caps out from the side profile we can see that they used a standard OEM profile as well meaning the top two rows are tallest and angle down. The bottom three rows angle up and the 3rd row down is mostly flat. 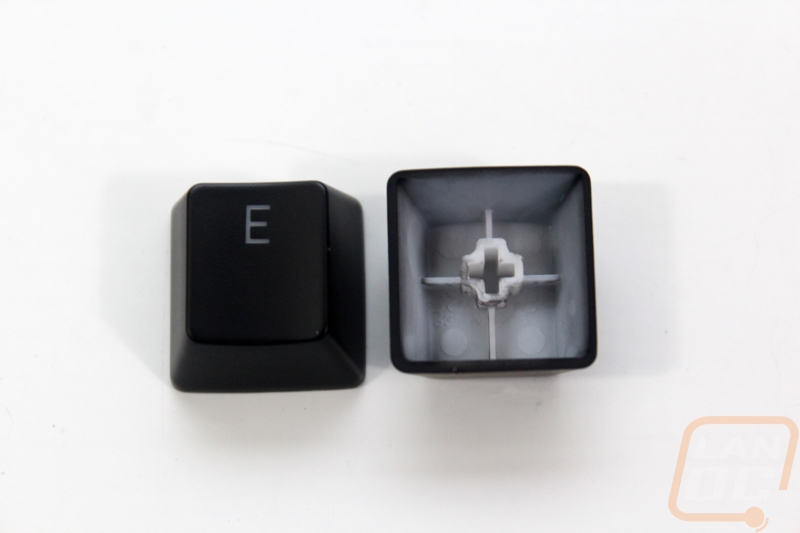 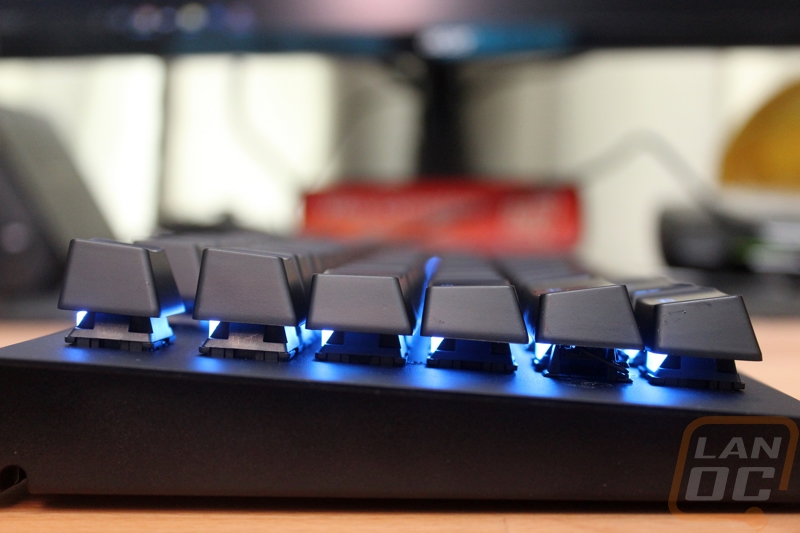 We have 1823 guests and one member online