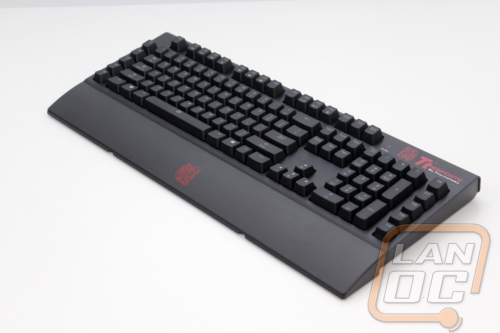 So the Poseidon Z Forged is a black keyboard with a full layout meaning it has a number pad. On each edge of the keyboard Thermaltake slipped in a stack of macro keys making this a fairly large keyboard at nearly 20 inches wide. Beyond the Tt Esports by Thermaltake logo up above the number pad they went with a very clean design though. They skipped out on having LED indicators above the number pad to instead put the indicators directly in the specific keys. So the caps lock doesn’t light up unless you have it pressed for example. This clean look goes perfectly with the aluminum top plate that runs the length of the keyboard. I will admit when I first read about the Poseidon Z Forged I assumed that Thermaltake was trying to do something similar to Corsair where they just use the keyswitch backplate as the keyboard. That design makes cleaning out your keyboard easier and keeps the design simple. This isn’t like that, the Forged is basically a full plastic keyboard but with a formed brushed aluminum plate on top of everything. 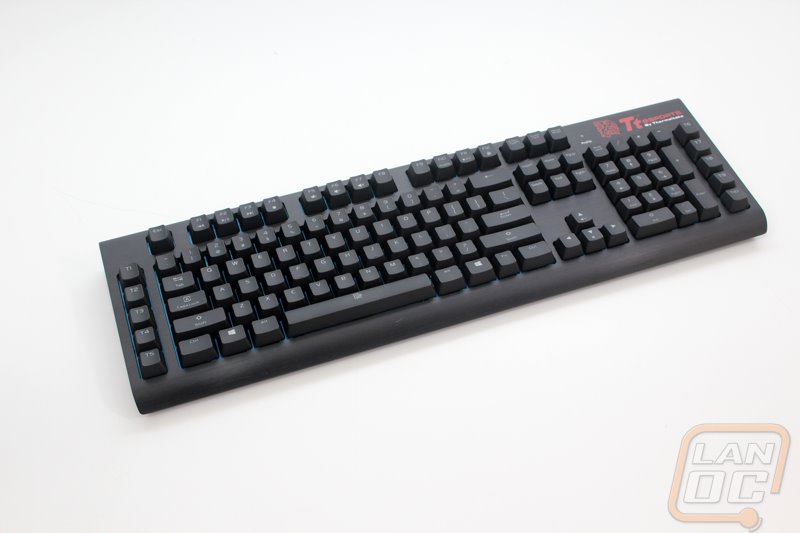 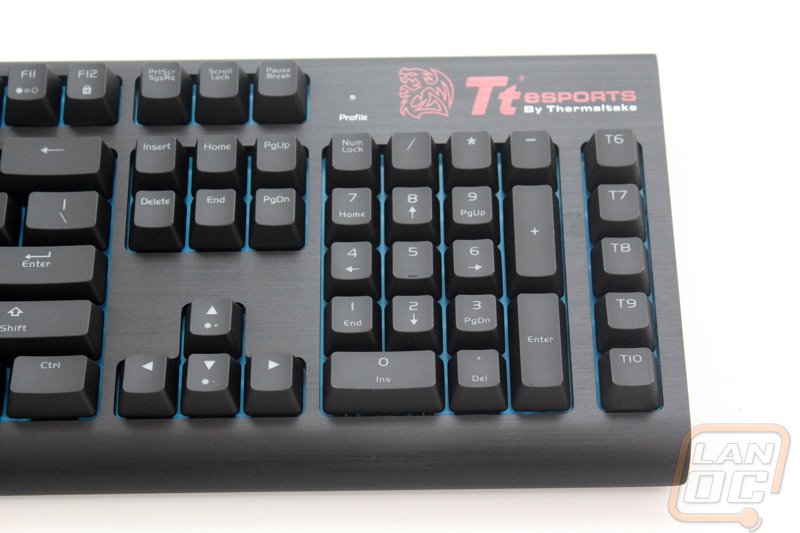 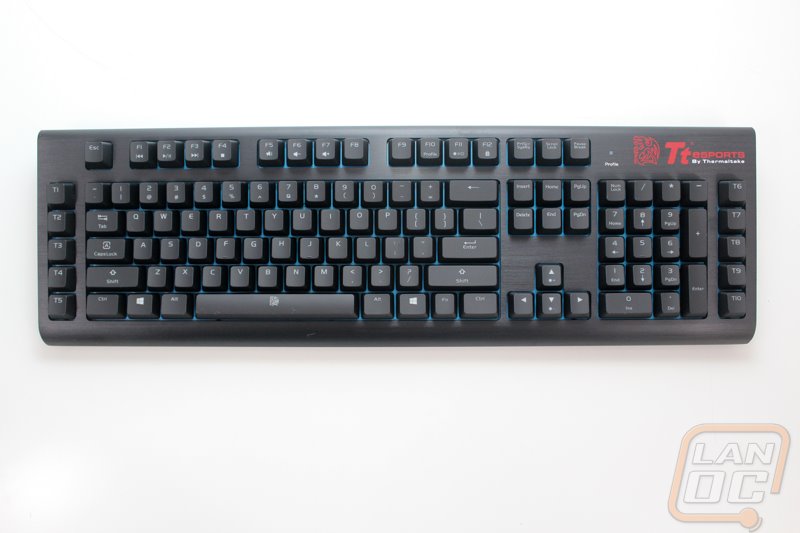 Also included with the keyboard is a full length wrist rest. This is good because at this length most standard wrist rests wouldn’t be long enough to fit the Poseidon Z Forged. The wrist rest forms to the curved edge of the keyboard and slides into place with two small arms with magnets in them to lock it into place. Normally a wrist rest like this would just use a plastic clip to keep things in place. I love the idea of the magnets here because in the past I have broken a few of the clips. In this case though I think there was something wrong with our sample. The two magnets weren’t attached to the actual wrist rest in any way, I actually had to put them into place and quickly move everything together letting the force of the magnet holding onto the keyboard to keep the magnet in its place. After talking to Thermaltake I can confirm that this was a defect, the retail keyboards should have them glued into place. 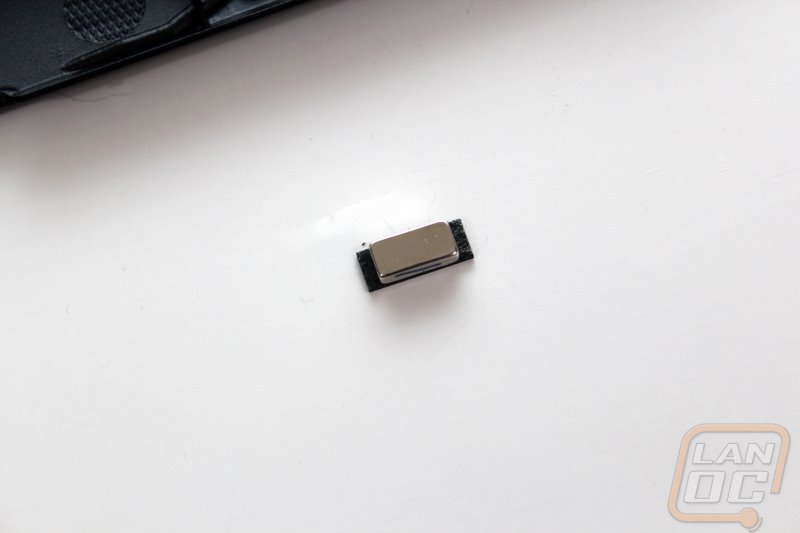 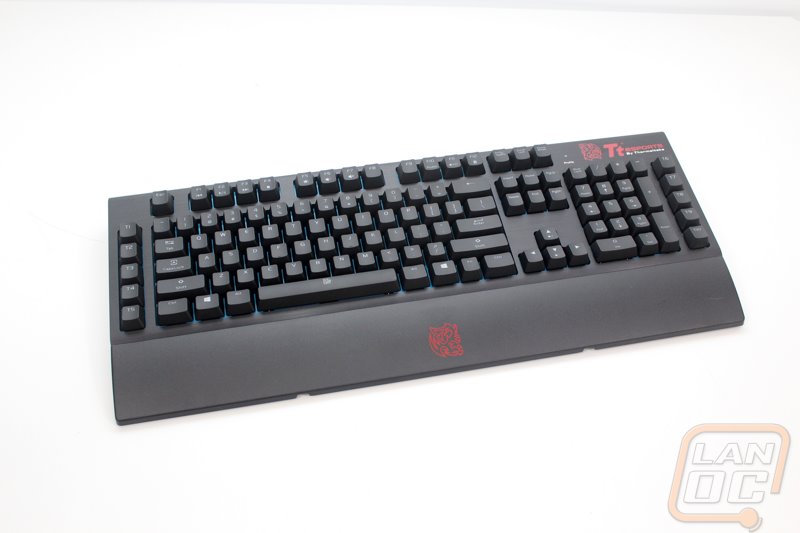 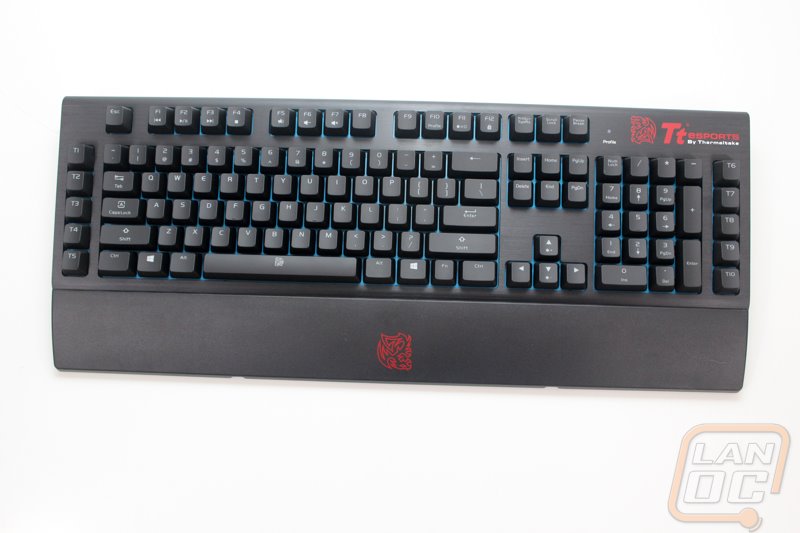 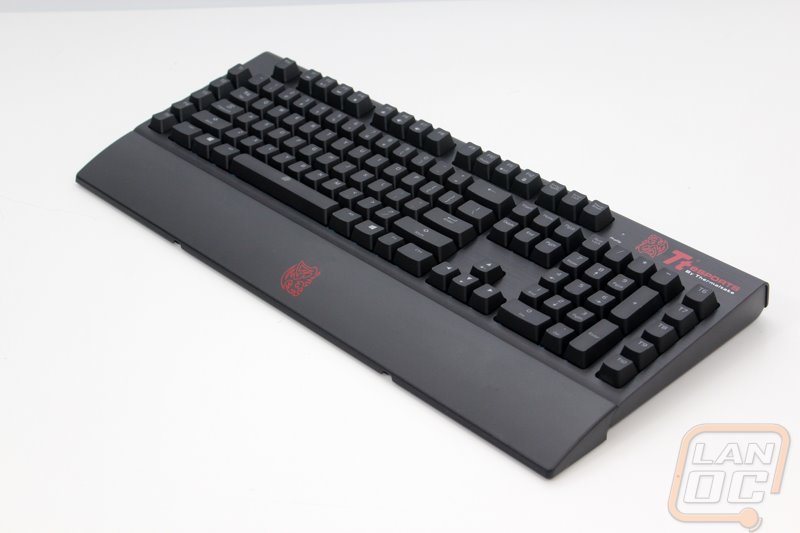 So any of you who have ever wanted to replace your keycaps and ran into issues with a non-standard layout will be disappointed to find out that the Poseidon Z Forged also uses a non-standard bottom row. This seems to be a trend with a lot of gaming keyboards but I’m not sure why. Basically a standard keyboard row will fit a total of 15 standard keycaps each standard keycap being called a 1u. Well a standard bottom row will have a 6.25u spacebar and four 1.25 keys on the right side of the spacebar and three 1.25 keys on the left. For some reason Thermaltake went with larger 1.5u Ctrl buttons on both sides and to compensate the function key is a smaller 1u key and the spacebar is a 6u. 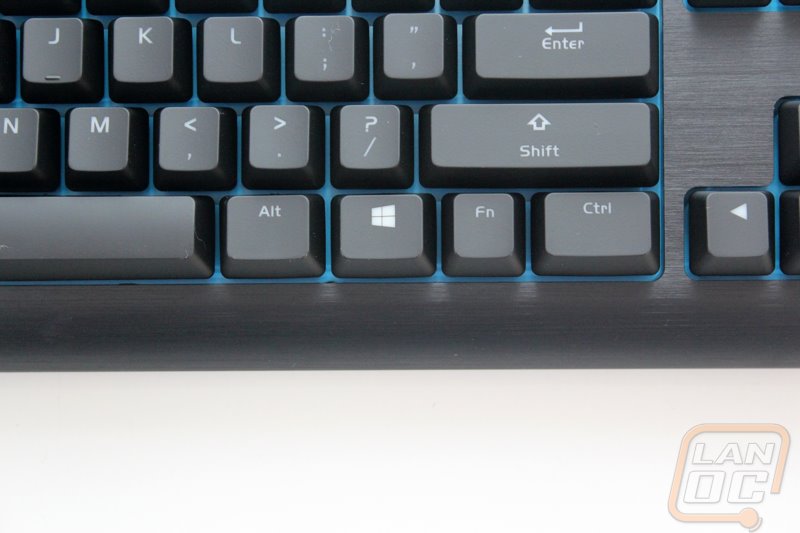 Speaking of function keys, we have a few on the Poseidon Z Forged. To adjust the brightness of the backlighting you can hold function and press up and down on the direction pad. Up in the F keys we have media controls as well as mute and volume. There is also the F10 Profile button that flips through your macro profiles. When you do this the profile LED color changes. Then next to it is the backlighting button that flips through the keyboards different lighting modes. 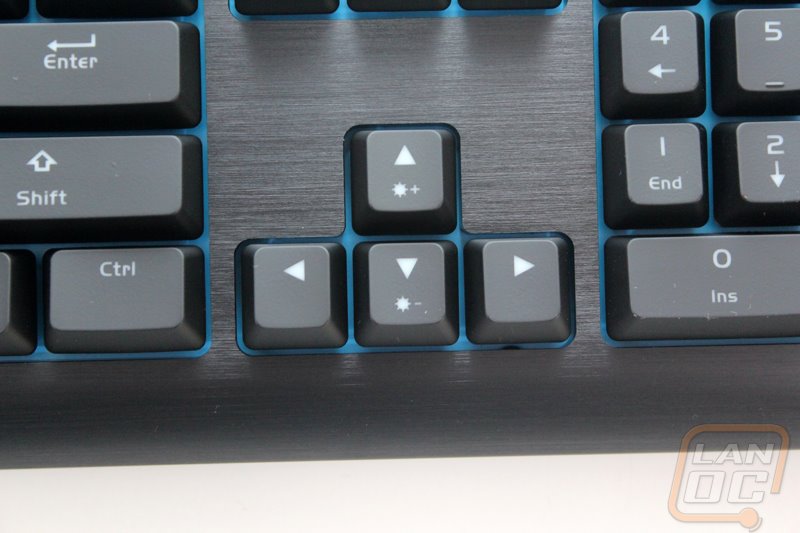 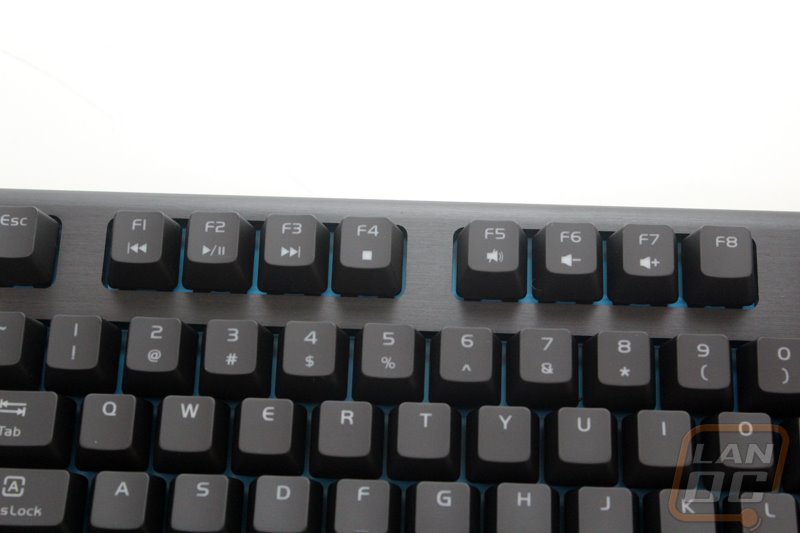 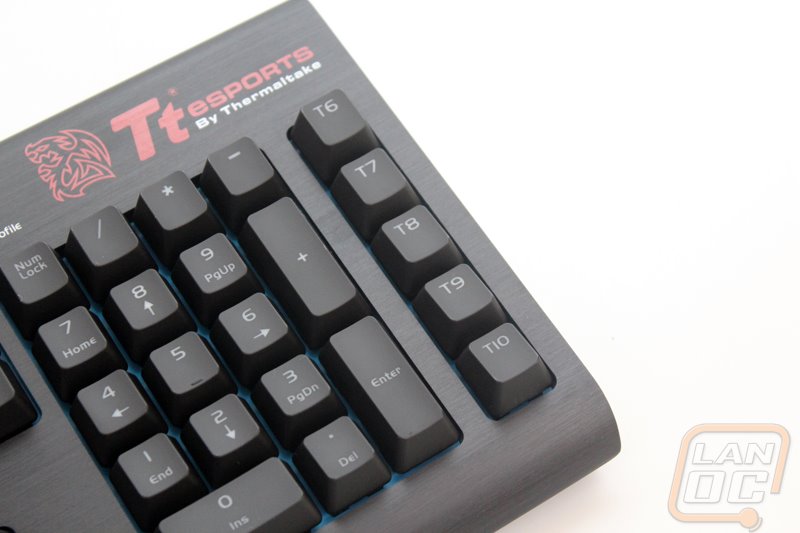 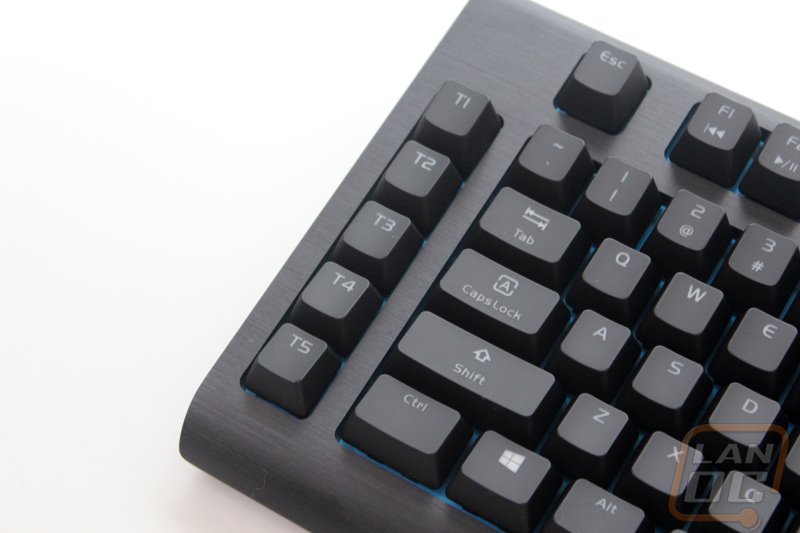 On the back edge of the Poseidon Z Forged Thermaltake slipped in a small USB hub. In addition that that the keyboard actually has a built in sound card that gives you heaphone and microphone hookups right on the keyboard without the need for passthrough connections. I’m actually really shocked that they were able to get the backlit keyboard, two USB 2.0 ports, and an audio card all on one USB cord. Typically even just adding a USB hub requires an additional cord for the power needed to push it on top of backlighting. 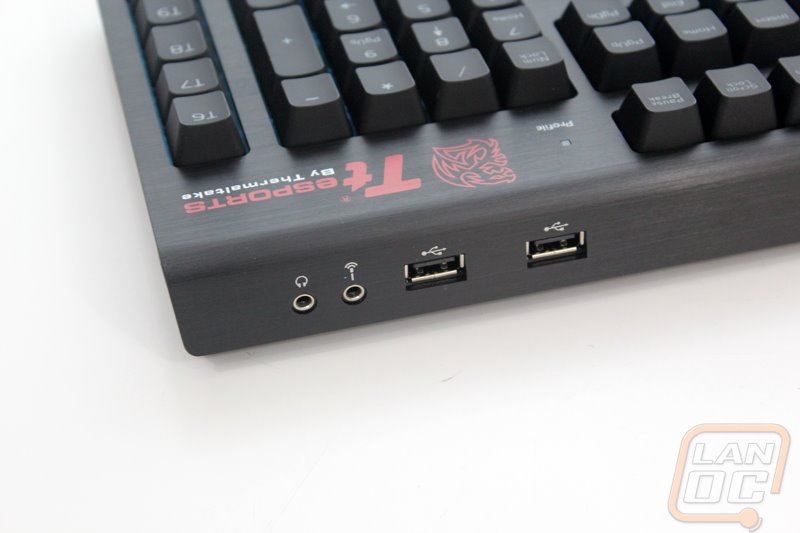 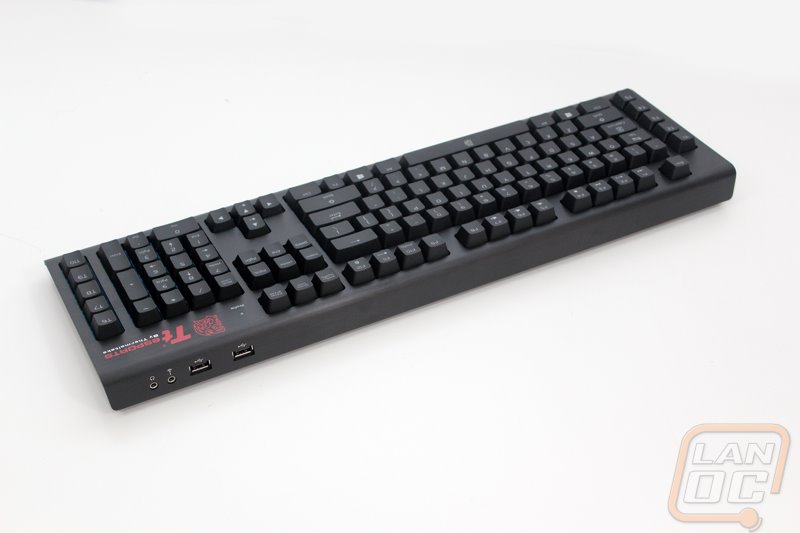 Here from the side profile we can see the radius of the back of the keyboard and we can also better see that the metal part of this keyboard is a top plate that goes over the plastic base of the keyboard. We can also see that they went with a standard OEM style key profile with a tall row 1 and keys angling on the other rows to form a slightly curved profile. I like that the macro keys also follow that same profile as well. 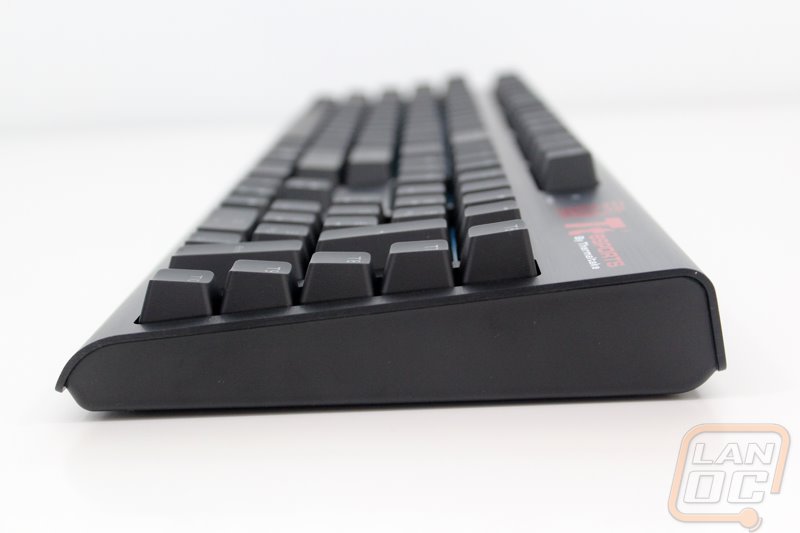 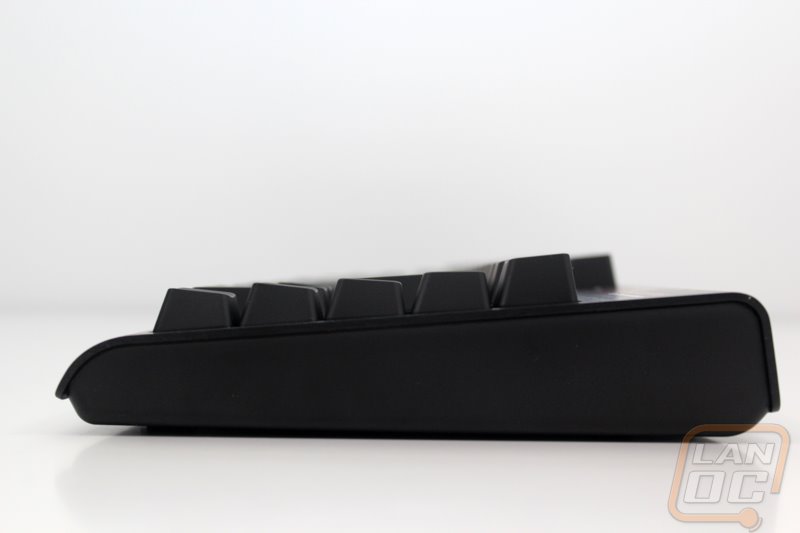 The bottom of the Poseidon Z Forged has a few things going on. In the middle we have the standard sticker with your serial number and all of the required federal certification logos. To keep the keyboard from moving around Thermaltake has put a few inch wide and ¼ inch tall rubber pads on the bottom. You get three on the front edge and then on the back they have two right on the flip out feet. When you flip the feet out the edge is also rubber coated to make sure you keep that traction. The feet are considerably wider than normal as well so things should be especially stable. Then for the detachable cord we have a few tracks to route the cord. What I was disappointed in though is there aren’t tracks that actually go out the sides of the keyboard. It seems weird to have three different options to route out the back of the keyboard and two out the front but no sides. 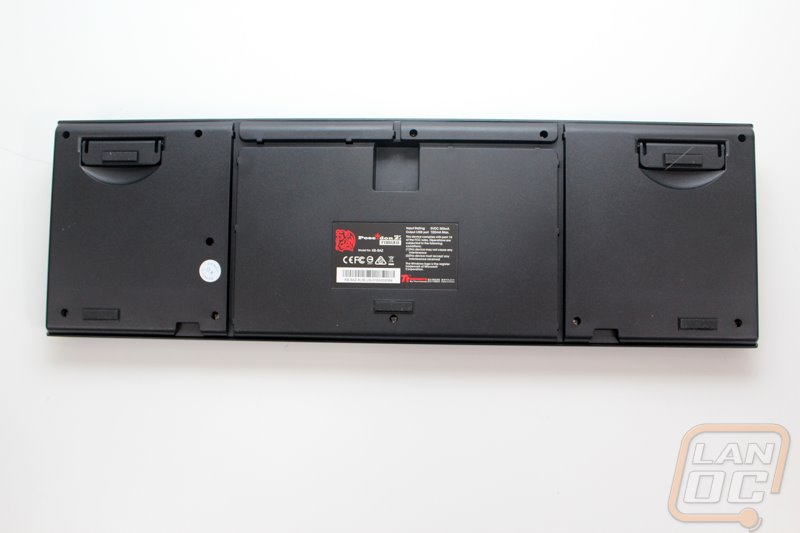 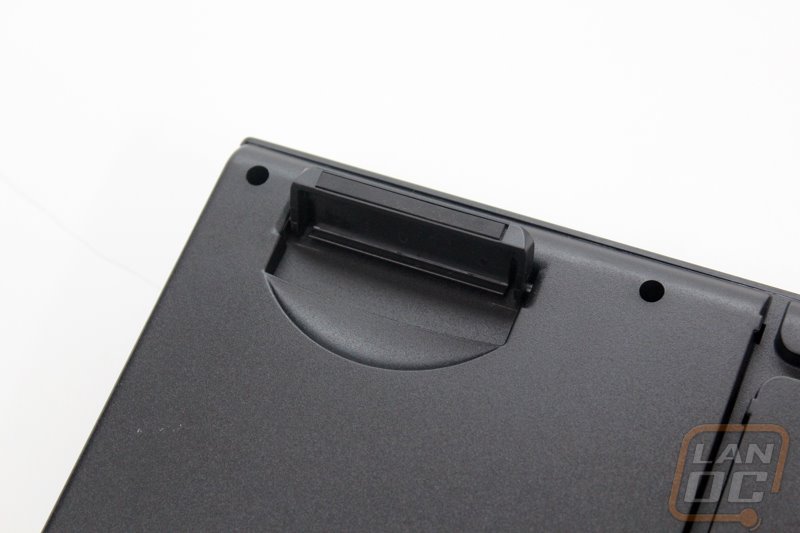 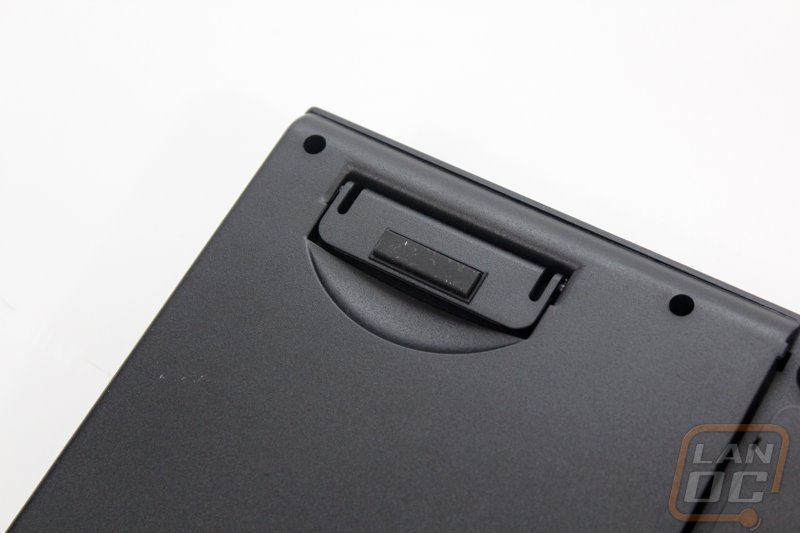 Much like some of the Cooler Master keyboards, the Poseidon Z Forged tucks its USB plug up under the keyboard. The benefit to this is it allows you to run the cord through the tracks and pick where you want the cord to come out. There are downsides though. For starters if you need to replace the cable you have to be careful that the plug isn’t too thick as it won’t fit. Getting at the plug is a bit of a pain as well. Personally I would prefer the plug be on the back edge of the keyboard for this reason. In addition, I wouldn’t be against seeing this be a Micro USB connection rather than Mini USB. That is a preference call, you can find both plugs depending on the keyboard. I just like having it be the same plug as most phones and other devices for simplicity. 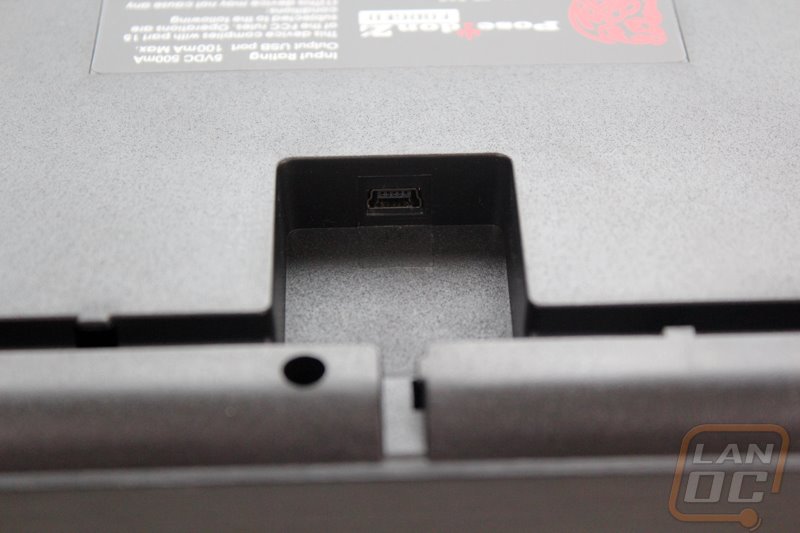 Thermaltake didn’t use a standard USB cord like most. The Poseidon Z Forged’s cord has the Tt branding molded right into the cord end. The cord itself is much thicker than a standard cord, to the point where it is a little hard to move around. They also put a tight sleeving on the cord for additional protection as well. 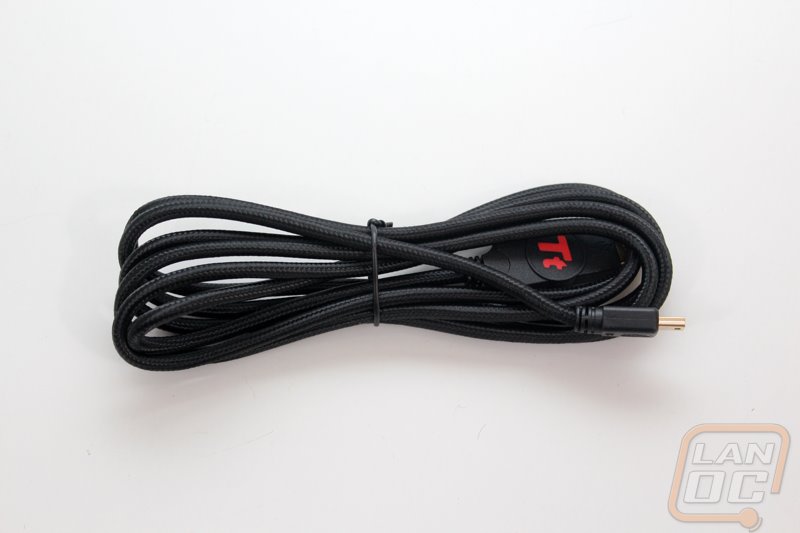 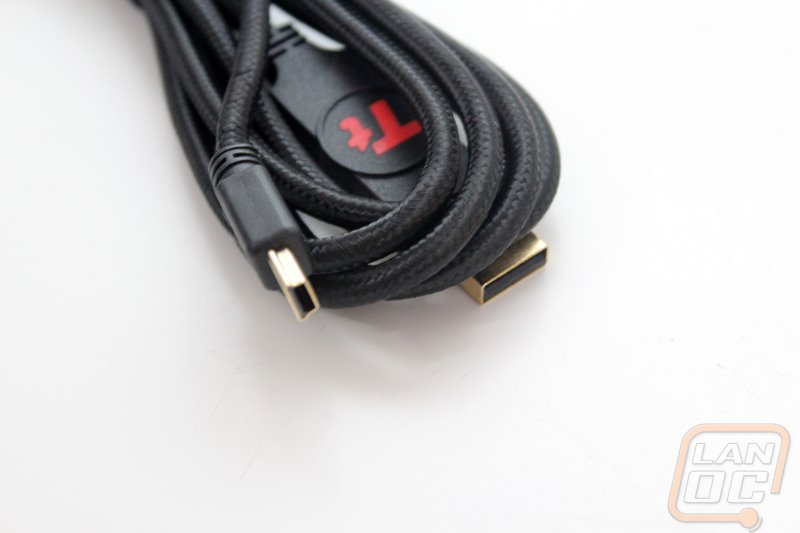 As I mentioned a little earlier Thermaltake has for the most part moved away from Cherry keyswitches and they now use what they call a Tt Certified switch. For starters I know there is a lot of debate as to if going away from Cherry MX keyswitches is a good thing. Stepping back and taking a look at it from a manufacturing point of view I do understand why Thermaltake and a lot of other manufactures have moved to other switches. The popularity of mechanical keyboards has completely overloaded Cherry and over the last few years there has been at times a full year waiting list for switches. Going with a different switch helps lower costs and in some cases it is the difference between actually having switches to build the keyboard or not. I will give Thermaltake credit, with the move they have had great pricing on the Z keyboards, this is more than Razer can say.

SO with the keycaps pulled off we can see that the Tt Certified keyswitch is a Kailh. This is one of the biggest manufactures of knockoff Cherry MX’s so no surprise here. We can also see that Thermaltake is using a plate mounted design for stability and they have painted the backplate bright blue to match the switches and to match the blue backlighting of this keyboard. Over on the enter key I pulled it off as well to see what they are using as far as stabilizers. I was really happy to see that they are using a Cherry style stabilizer. This design uses a stabilizer bar that is under the plate and much much easier to work with if you ever replace keycaps. Ironically if it wasn’t for the non-standard bottom row replacing the keycaps on this keyboard would be very easy. 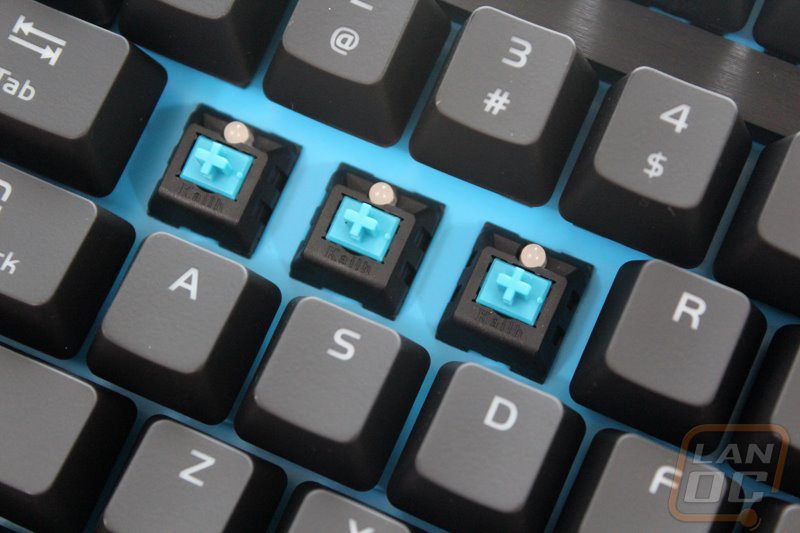 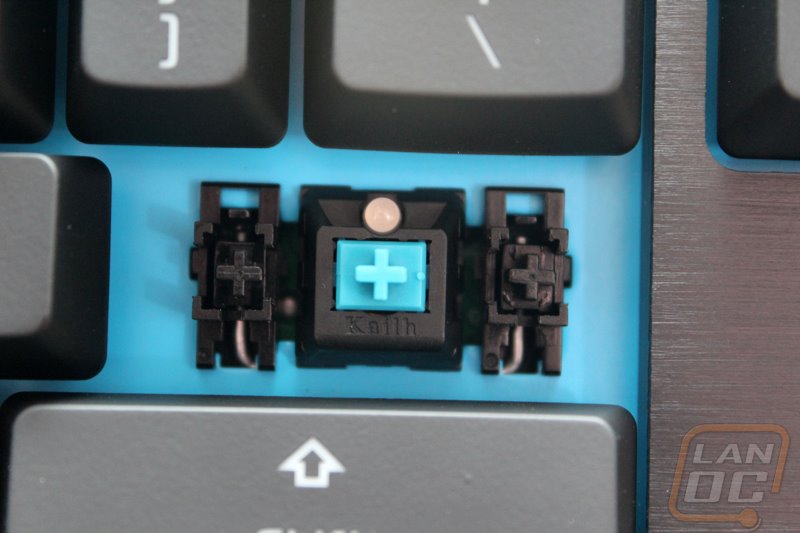 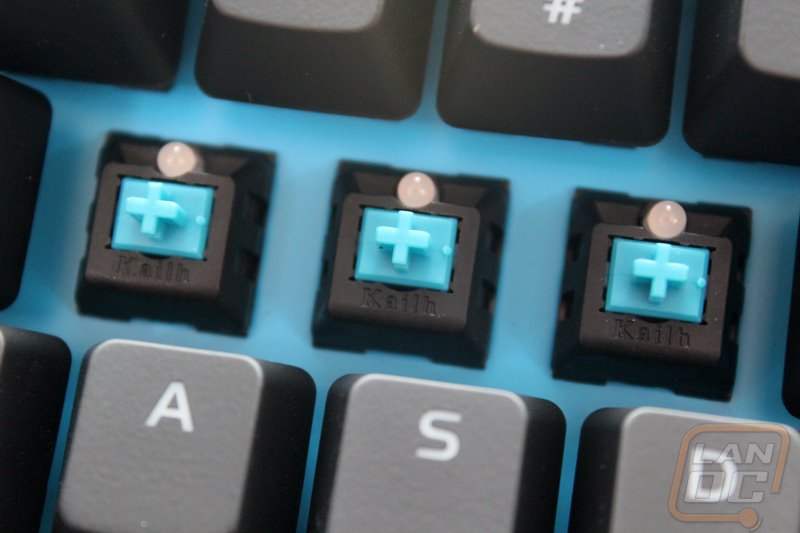 garfi3ld replied the topic: #36680 29 May 2015 21:29
Before we get to the weekend we have our week ending review. Today I check out the Poseidon Z Forged from Thermaltake. With a partial metal case they have gone a different direction from what they normally do with their Poseidon keyboards. Check it out and find out what it is all about! Have a great weekend everyone!
Read More...