Most of you who have read any of my past mice reviews will know that I am very particular about them and have a strong hate of the Phillips Twin eye sensor that a good portion of the market has been using for a few years now due to a few of the sensors quirks. When I was introduced to Cooler Master’s Gaming Accessories Product Manager, Carter Salley, he and I had one of the geekiest conversations about mouse sensors and our dislike of the Twin Eye sensor. When it was all said and done I was left very excited to see what Cooler Master would be coming out with in the future with someone like Carter as the wheel. Today I have in my hands their Sentinel Advance II, a revamped version of the Twin Eye equipped original, but without the god awful sensor. With a proper sensor onboard, it might very well be a mouse to consider.

I typically don’t comment on our specifications section but I wanted to point out that Cooler Masters specification lacks any of the normal marketing BS and goes right into details like the sensor users, its velocity and acceleration, things that most manufactures don’t release to anyone. I’m very impressed. 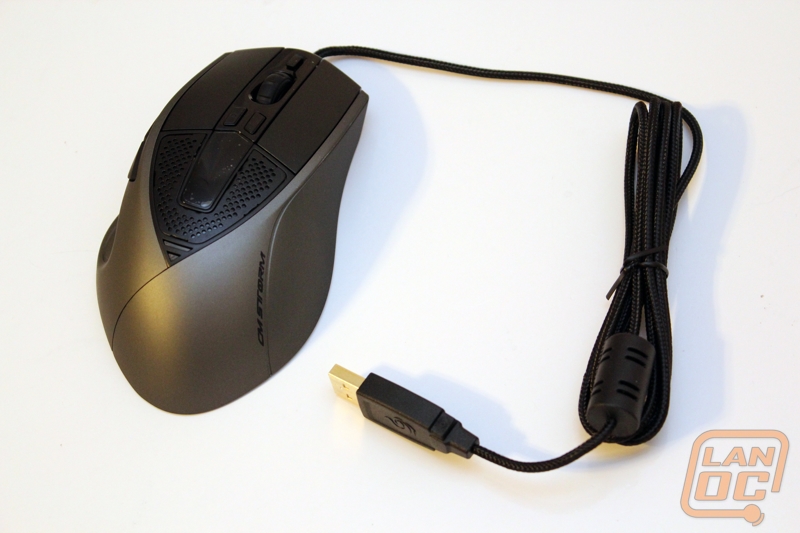 The packaging for the Sentinel II is similar to what we saw on the original, but this time they added a door on the front. The front is very simple with an overhead view of the mouse along with red flames coming from behind it. Beyond that photo and the name itself the only other info on the front is that it uses a new sensor, the Avago ADNS-9800. Behind the door you have a nice easy to grab mouse to get a feel for its shape and another photo of the Sentinel II on the back of the door with its key features highlighted. Around back there is a specification listing. 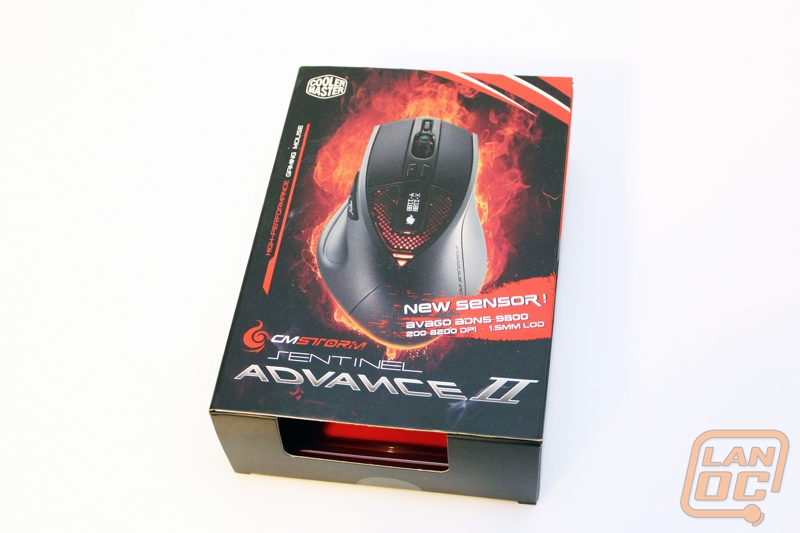 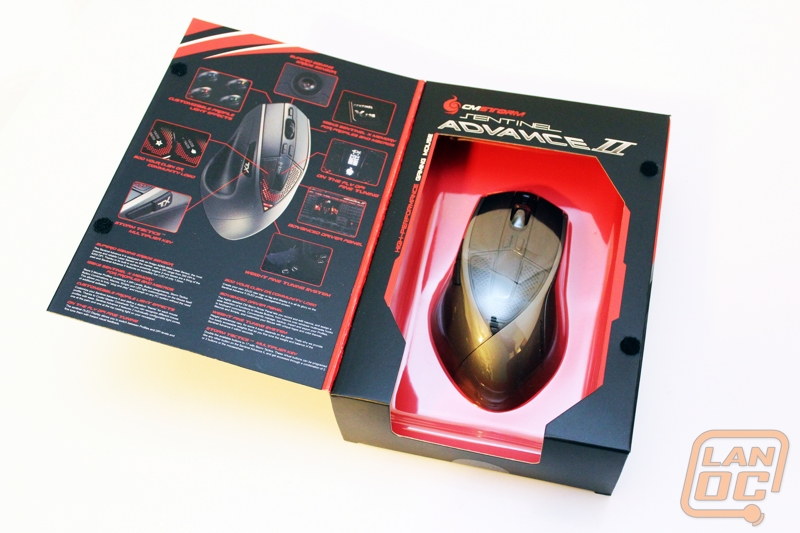 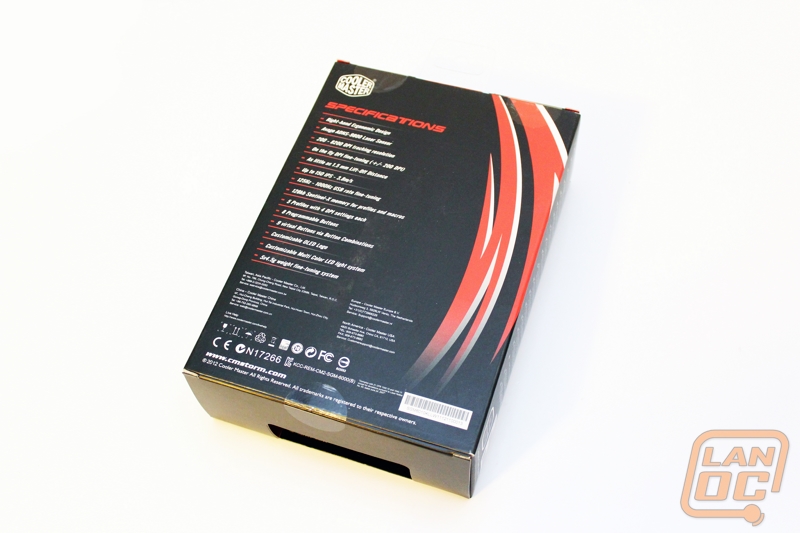 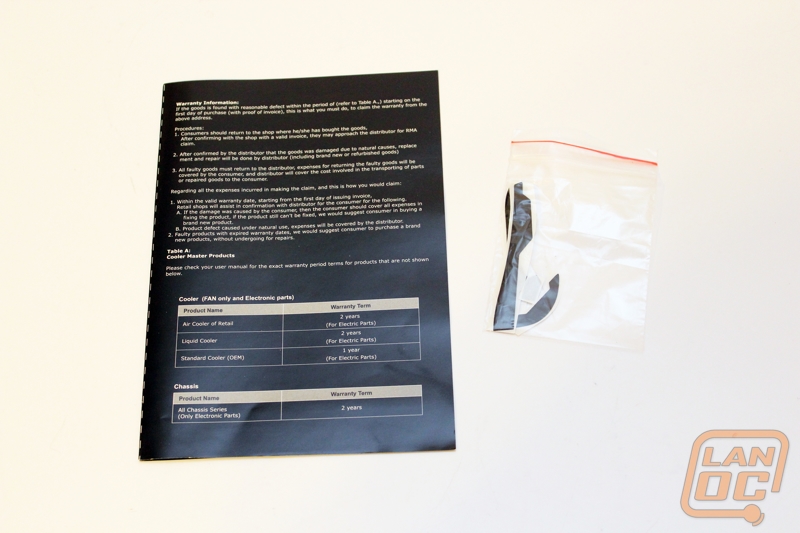 To use while testing the Sentinel Advanced II, Cooler Master sent along their CM Storm CS-X Battle Pad DP. It was boxed up in a similar box to what we normally see used on soft mouse pads. The red and black artwork on the box is simple but nice. I also like how they included a sample of the mouse surface on the box to make sure you know what to expect, you can find it right next to the pads specifications. 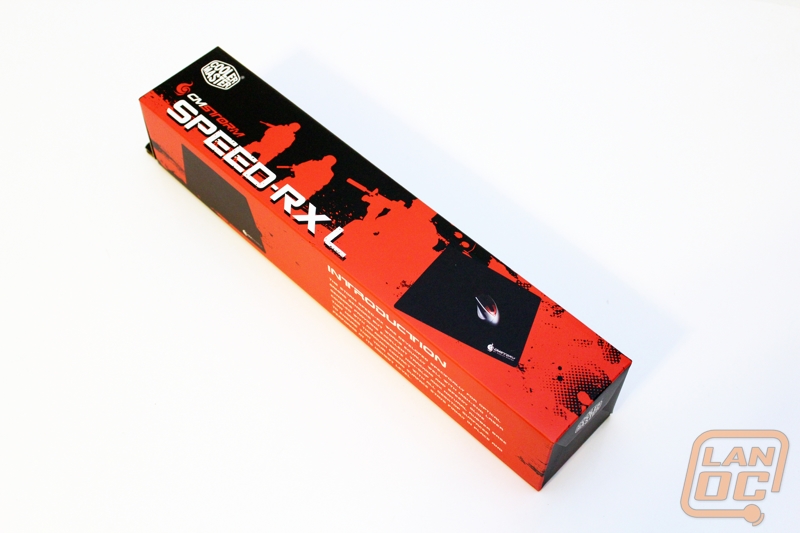 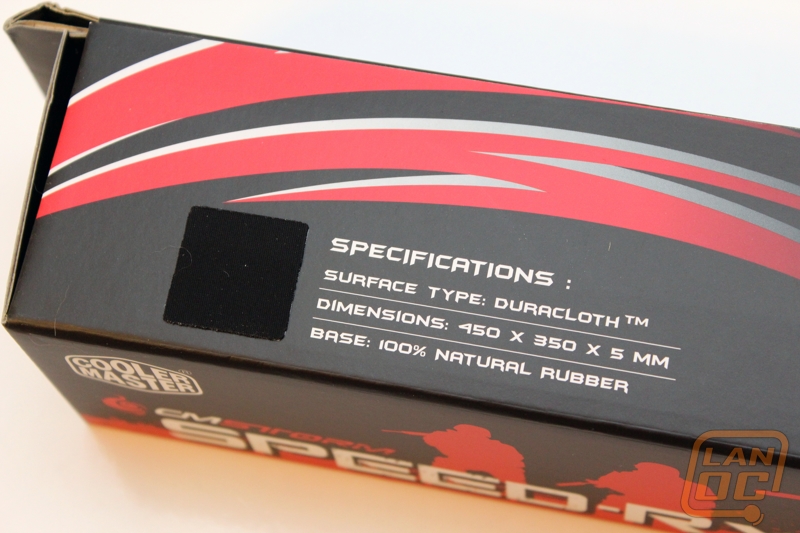 In order to really take advantage of the features most gaming mice offer you have to use their software. The Storm Sentinel Advance II isn’t any different. The mouse didn’t come with any software in the packaging; this is to make sure you download the most up to date version. For some people this is frustrating, they want it to work out of the box. But for me this is never an issue, because I always end up downloading the latest version anyhow. After getting it all installed I fired up the Sentinel Advance II’s software and was greeted to software just like what Cooler Master has used before.

On the main control page you have a large photo of the Sentinel Advance II in the middle with DPI controls on the right, button assignments on the left, and the ability to flip between its five profiles. 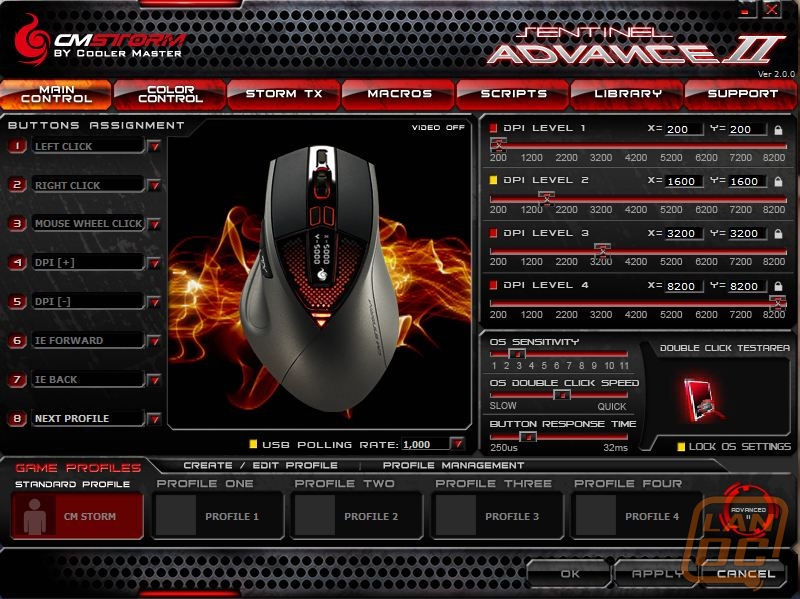 The color control tab up top does just that. You have the ability to change the color of the Sentinel Advance II’s colors in two sections. On top of that you can change how the lighting acts with always on, breathing, on mouse click, and just turning it off. This is also where you can upload a logo to the top OLED screen. This process is a little more difficult to do compared to other mice with similar functionality. It would be nice if they had a few guidelines as to what dimensions and file size it requires to make this easier. 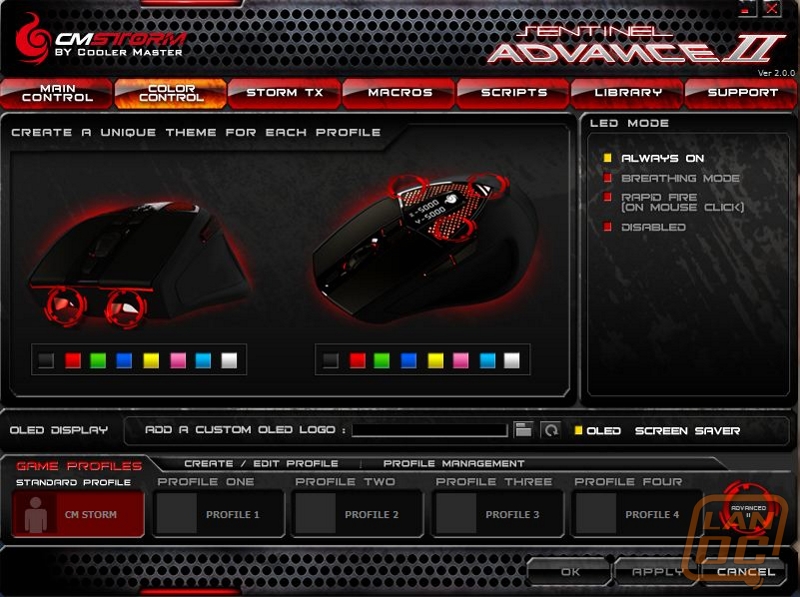 The storm TX tab stands for Storm Tactics, their term for advanced key combinations. This is basically like holding a shift button, giving you even more button 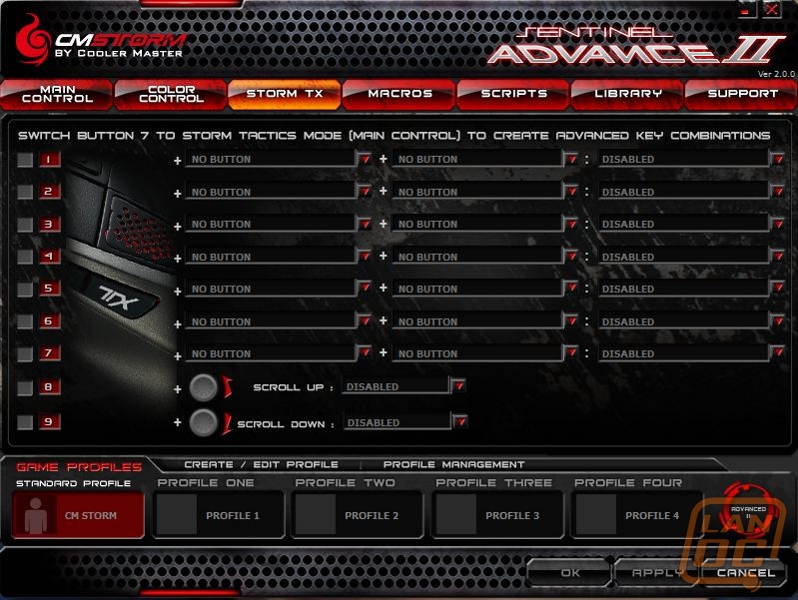 The macro tab lets you record and save macros as well as load, edit and copy them. Once you create a macro you can put it to use back on the button assignment section on the main tab.  The script tab is the same as well, 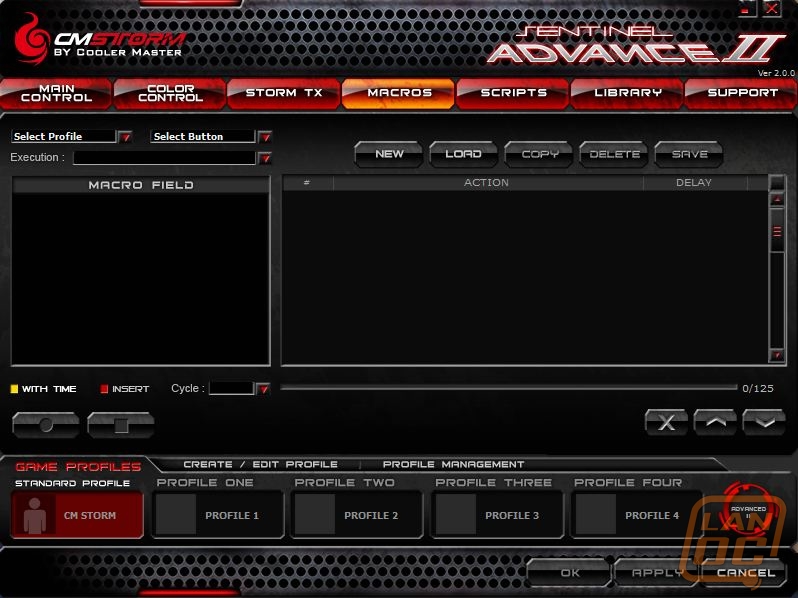 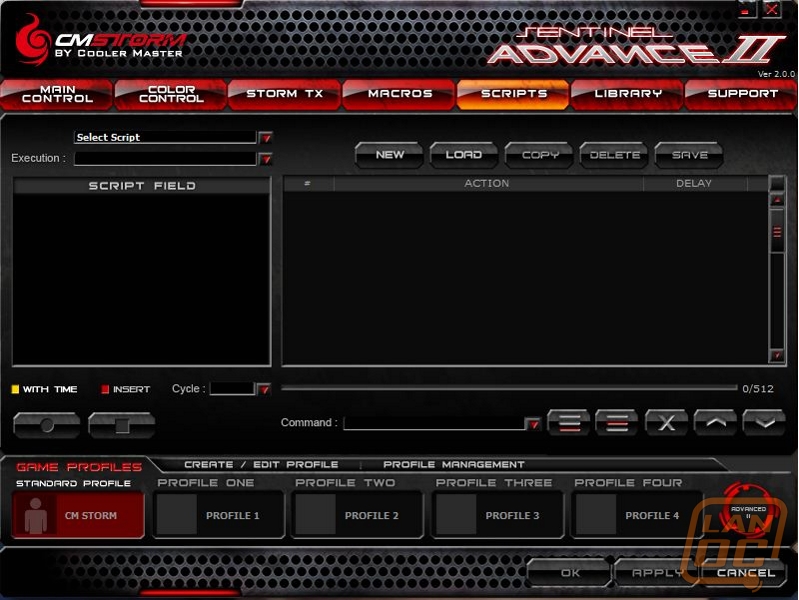 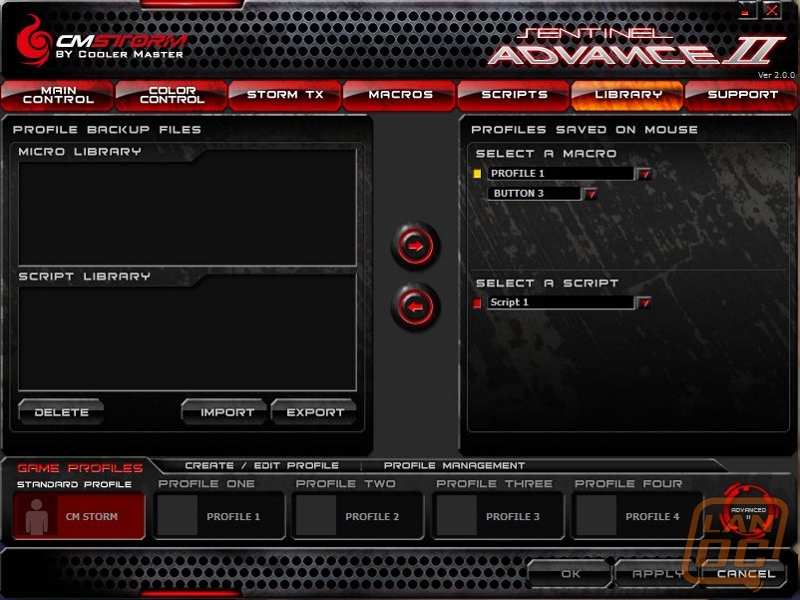 Overall the software has everything you need and some, the layout and design fits the mouse and is easy to find your way around. My only complaint came from where you upload a custom image to the built in OLED. A small update to the software could make that much easier to deal with.

You are even able to do the rapid fire that past Cooler Master mice can do. Here are two video examples we have made in the past.

Collectively at LanOC we spent a lot of time with the original Sentinel, my wife used it up until recently and Adam also has one that he still uses every day as well. All of our opinions about the original Sentinel very wildly, but there are a few things that stand out for everyone. The issues with the Twin Eye sensor and the durability of the Sentinel itself being the issues we all experienced. Because of that my focus first was that these two issues were fixed. On the sensor front, the Avago sensor is worlds better than the Phillips sensor in the old version. The weird quirks of the twin eye are gone as well as its z axis tracking issues. The Sentinel Advance II tracks perfectly in and out of game. As for durability, there were a couple issues that we have seen. First the rubber finish on the old mouse would sometimes come off; dropping that finish all together corrected that issue. The other issue we had was with the scroll wheel, even though the new mouse scrolls perfectly, I have no way of confirming if this is fixed until we put the mouse to extended testing. After this review my wife will be using the mouse for some time, if anything can break she will manage to break it. 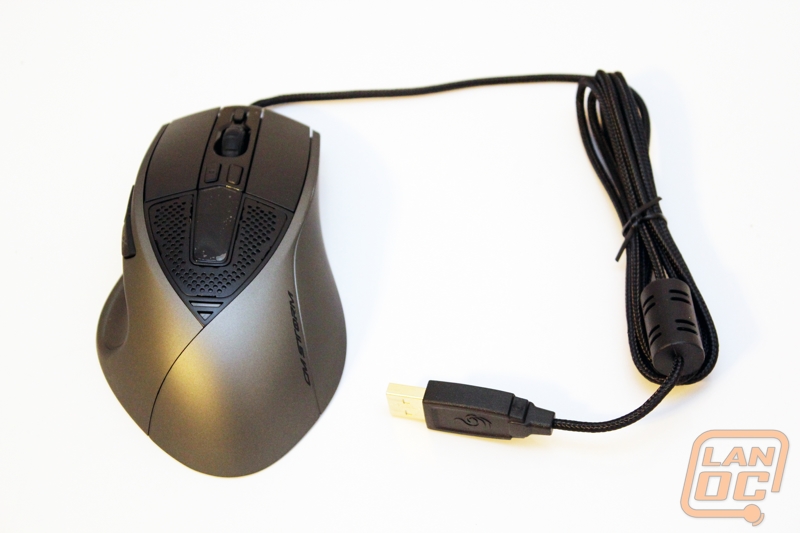 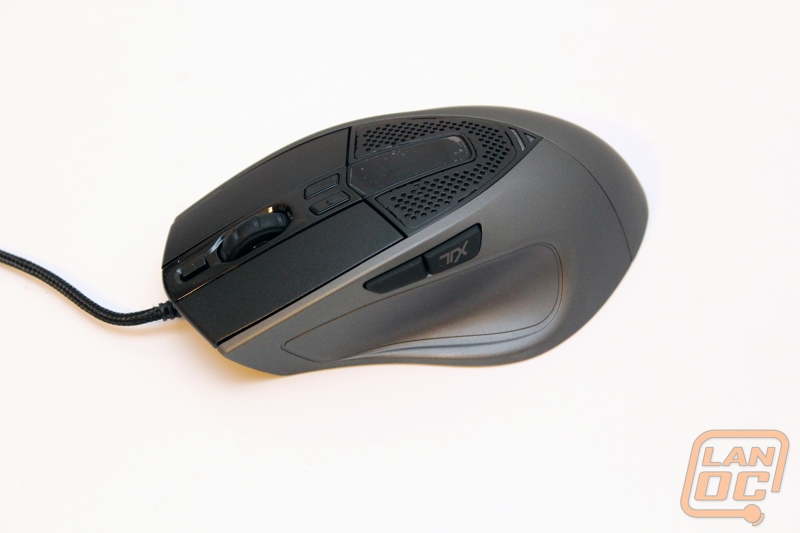 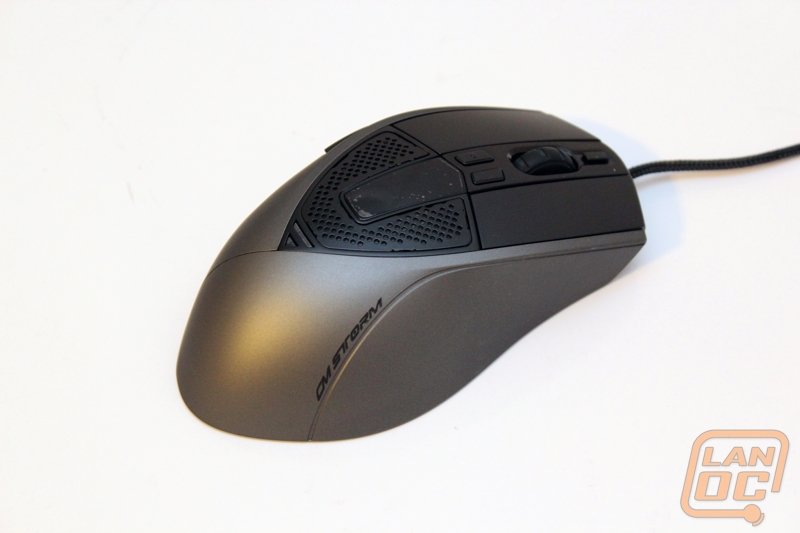 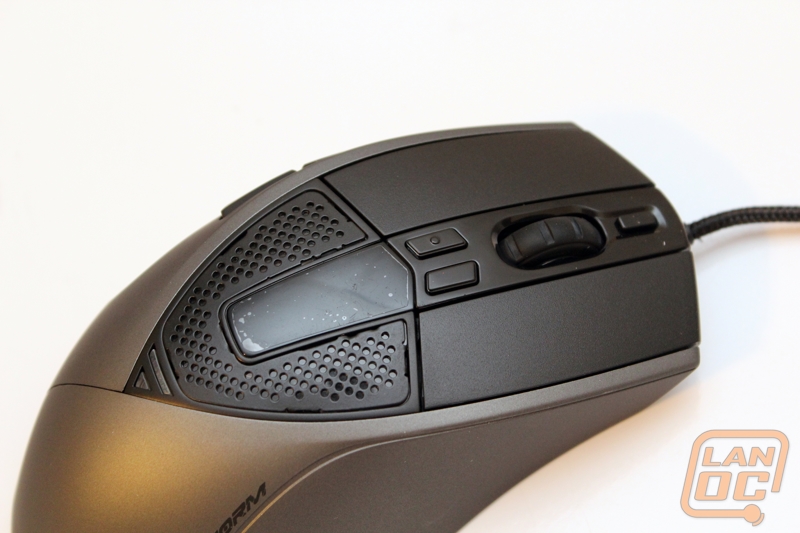 Beyond the sensor and durability, what are my thoughts on the Sentinel Advance II? On a personal note I still find the mouse shape to be a little long and weird to hold. Both Adam and my wife love this shape though, so it’s not all bad. The button ahead of the scroll wheel is impossible to reach due to the length of the mouse and for some the front side button is also out of reach. Other features like the built in weight system will help you tune the mouse to feel perfect for you. 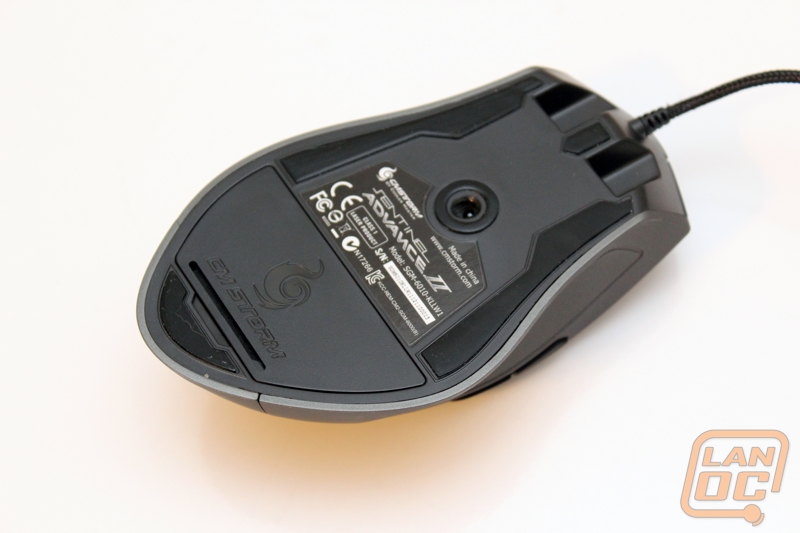 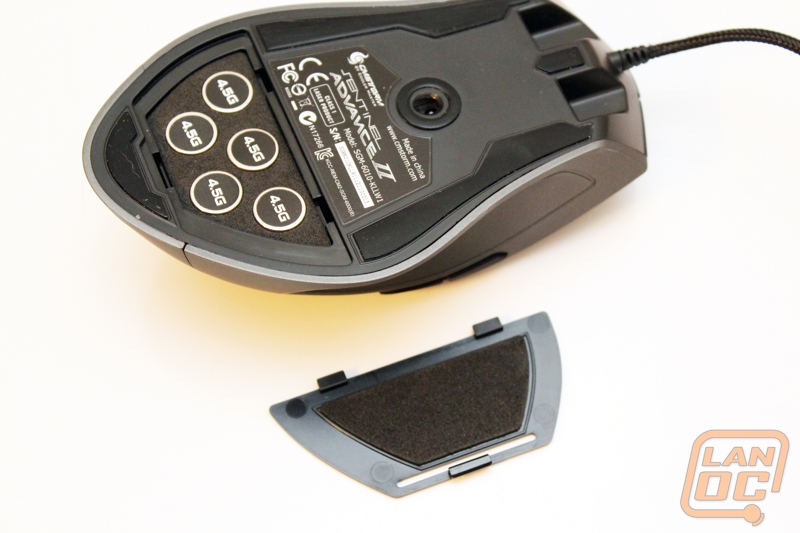 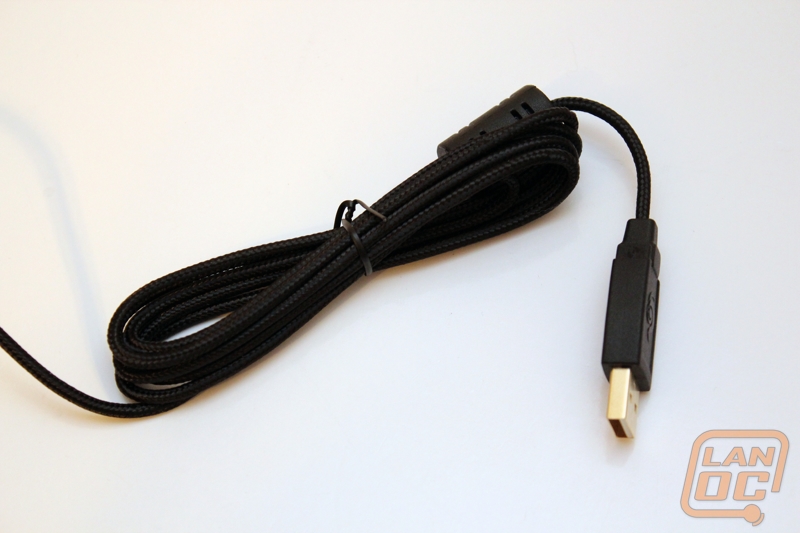 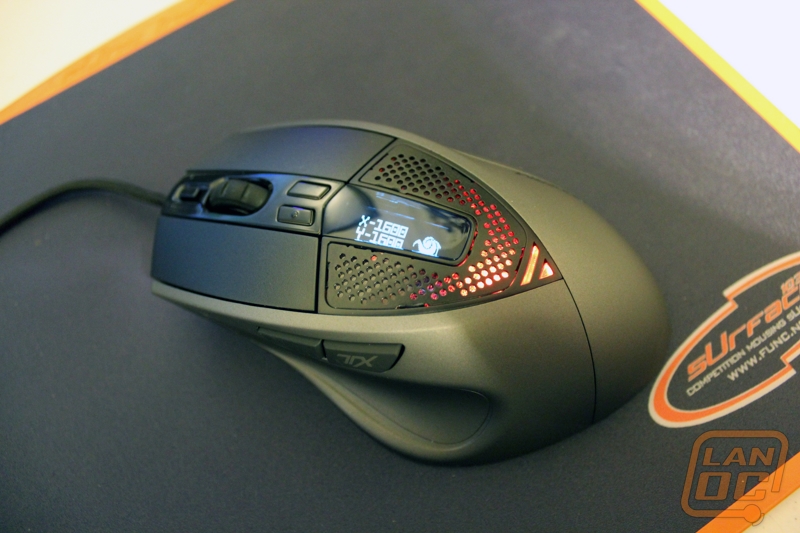 On a side note, the mouse pad that Cooler Master shipped with the Sentinel Advance II was also nice. I replaced one of my LanOC mouse pads with it for a few days to give it a try, although I prefer hard mouse pads I found it to be just the right size and with just enough padding, without being extremely thick like we sometimes see. 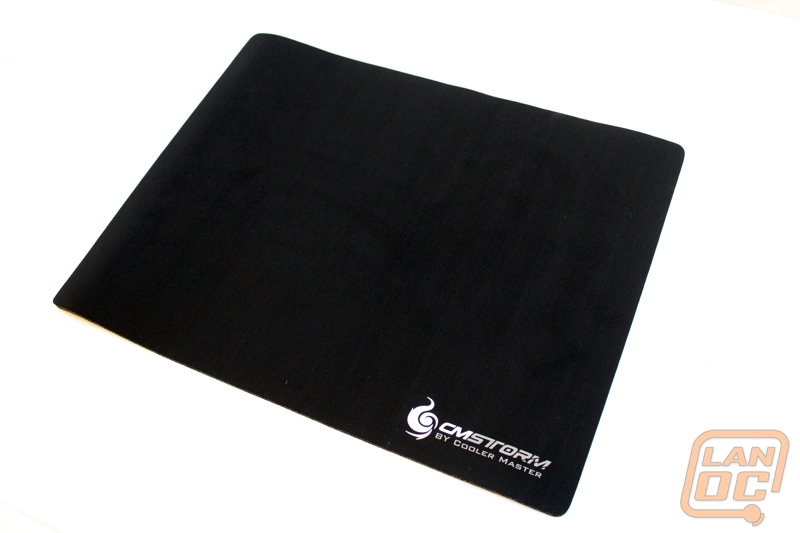 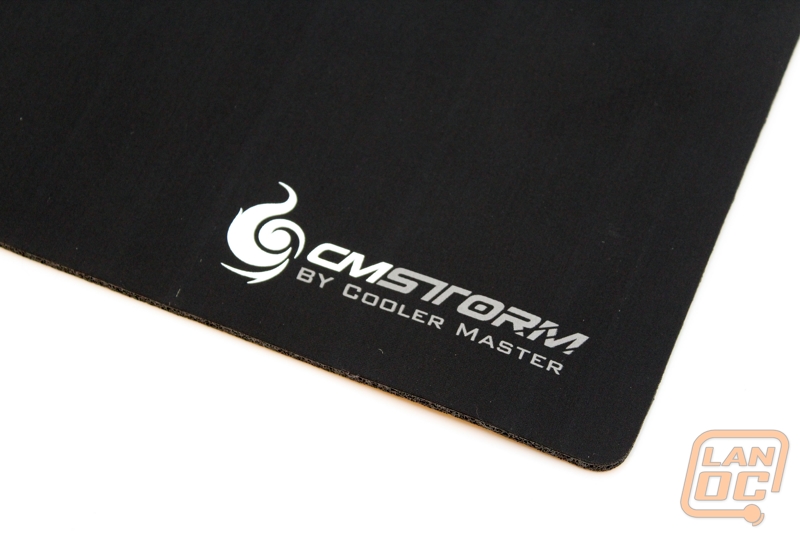 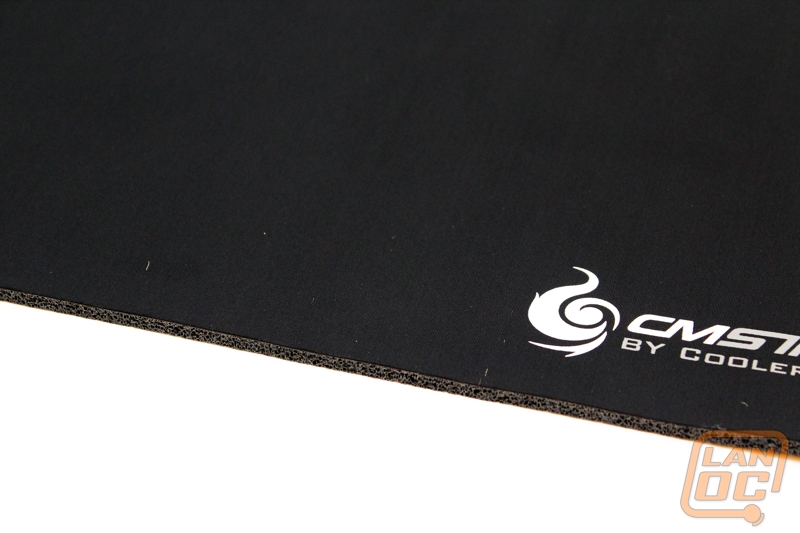 Had I not spoken with Cooler Master in depth about sensors before, I would have been a lot more skeptical about the Sentinel Advance II when it was introduced. My original experience with the first version was questionable at best after living with it far beyond our original review. Because of that I was really hoping that Cooler Master turned things around with their revamped version. Changing out the sensor played an important role in this. But without changes to its durability none of it would matter. Judging from the few changes they made like the finish of the mouse itself, it looks like they are trying to fix the issues that people ran into before. Of course for me, as much as I love the sensor I can never get used to the shape. My wife on the other had is very excited to get her hands on it. With the built in DPI readout and all of its other features I know she is going to really enjoy her time with it. If you are looking to pick the Sentinel Advance II up, my advice is to first get one in your hands to make sure you will like its shape. If it fits you, it will be a great mouse to game with at a price that is much lower than the Sentinel who has a similar LED readout. 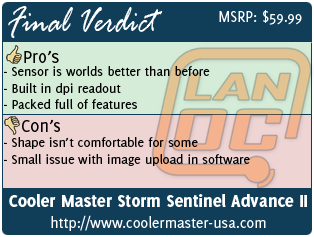 You might call him obsessed or just a hardcore geek. Wes's obsession with gaming hardware and gadgets isn't anything new, he could be found taking things apart even as a child. When not poking around in PC's he can be found playing League of Legends, Awesomenauts, or Civilization 5 or watching a wide variety of TV shows and Movies. A car guy at heart, the same things that draw him into tweaking cars apply when building good looking fast computers. If you are interested in writing for Wes here at LanOC you can reach out to him directly using our contact form.
Discuss this article
Log in to comment
Posts in discussion: Cooler Master Storm Sentinel Advance II