The big news from Cooler Master at CES this year was the upcoming release of the long awaited V10 heatsink. Last year they showed off the V10 design at CES similar to what eventually released but without the TEC cooling that was included in the final product. Speaking of the TEC cooling, the idea of a hybrid cooling solution isn't new, but has been far from perfected. Cooler Master believes they have the top dog in cooling performance with the V10. Today we will be comparing the V10 to Cooler Master's V8 to see how much of an improvement the step up in price and size gets you. 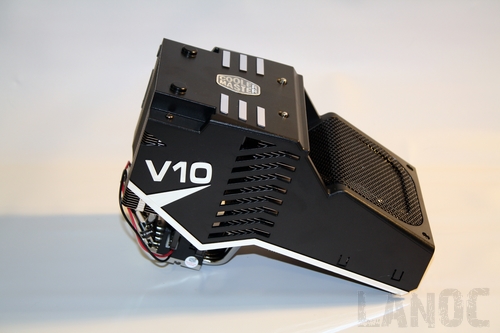 With the V10 being Cooler Master's pride and joy, I wasn't surprised too much when it showed up in a flashy box. The front of the box has a very large picture of the heatsink fading into the black background. The large V and V10 logo's really popped against the black with a metallic red finish. Keeping the front of the packaging clean the only other things you will see on the front are 200 watts of cooling, a sticker stating that it comes with Thermal Fusion 400 thermal compound, and that the heatsink is i7/1366 ready. The back of the packaging makes up for the lack of information on the front with a full specification list. Alongside you will find a listing of features along with pictures of the features on the heatsink. To top it all off Cooler Master included diagram's of the heatsink to give you an idea of the size, although frankly the size of the box should be a clue. 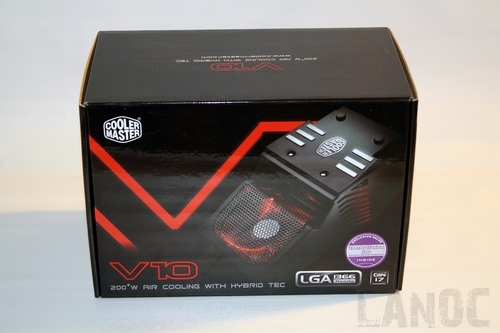 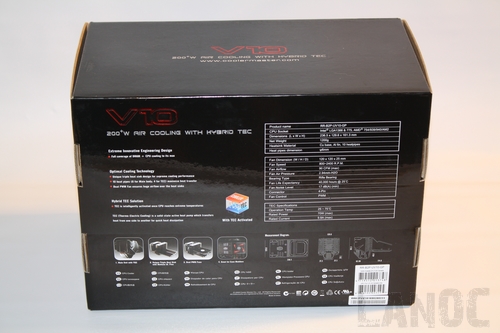 Inside the V10 is firmly packed in foam to keep it from being damaged during shipping (or in the case of a few of our staff, humping.. haha). 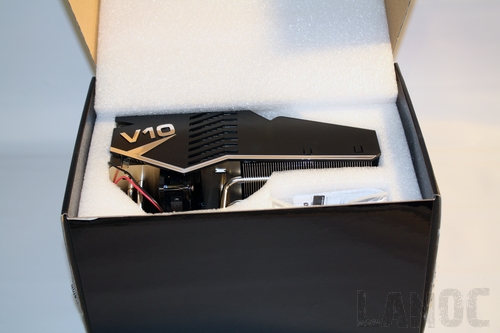 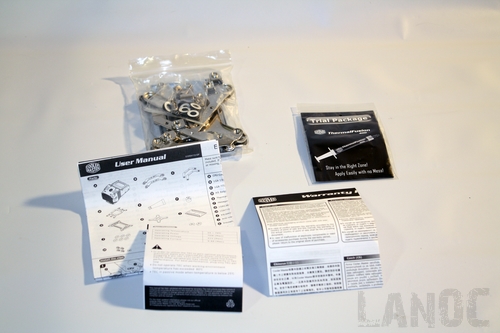 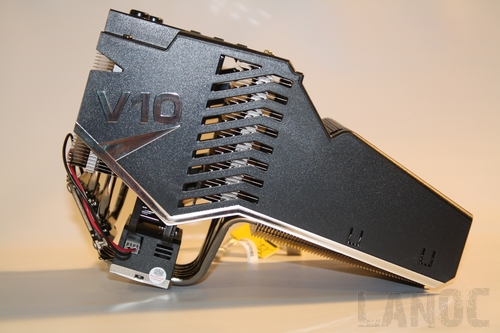 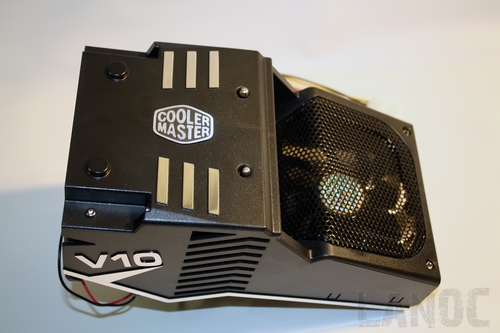 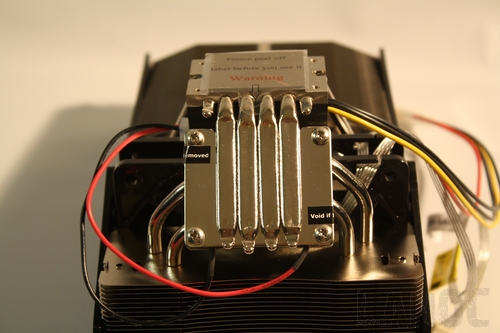 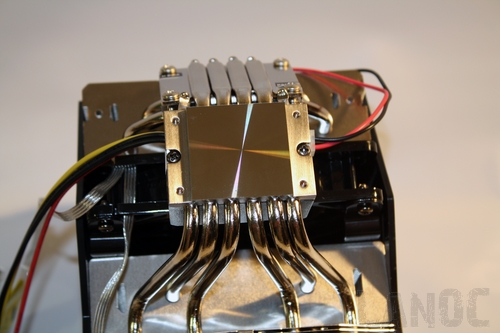 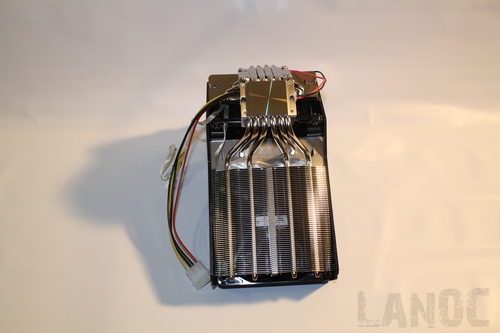 I expected installing the v10 to be somewhat of a challenge due to the size of the heatsink. I was suppressed how well it fit into the Sniper case, no one with large mid towers to full size cases should have too much trouble. I was disappointed to see the mounting system was still the same as the Hyper N520 that I tested last January. Even though it does do a great job of securing the heatsink, if you don't have a case with access to the back side of the motherboard you will have a lot of trouble anytime you need to remove the heatsink. In the V10's case this is a major flaw, the heatsink covers your ram and other important areas of your motherboard. If you need to get to the ram you may have to remove the motherboard (during testing I had a ram slot on the motherboard go out, adding and removing the ram was very difficult with the heatsink in but not impossible). Other than issues with the mounting bracket, the installation of the V10 went smooth. 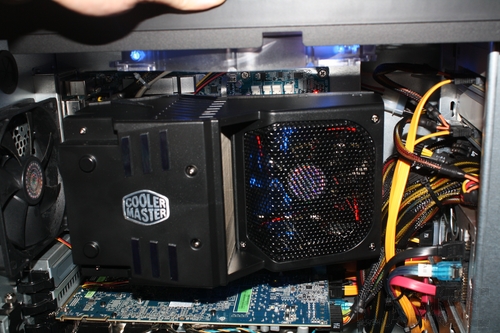 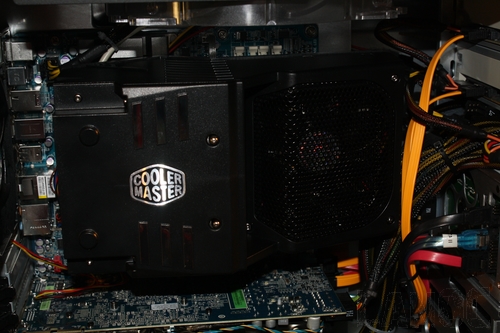 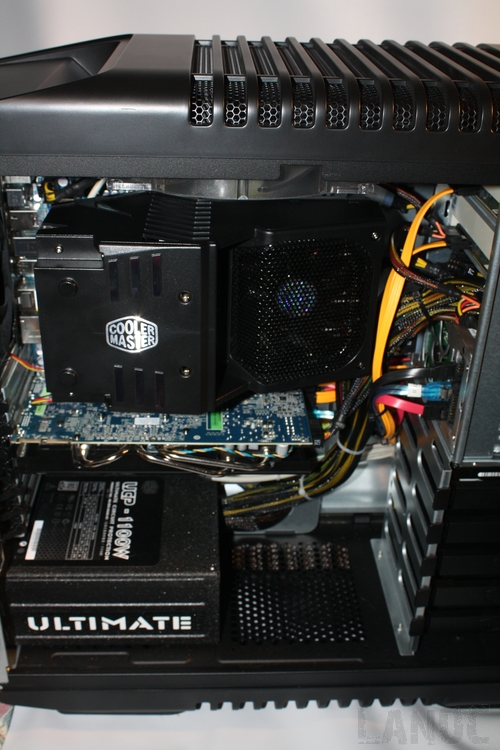 In order to test the V10 I had to compare it to another heatsink. Unfortunately, I don't have a stock i7 heatsink to test to see what kind of upgrade it would be. But I do have a Cooler Master V8, a great performing heatsink on its own. To compare the two heatsinks I used performed our standard test using Prime95. With the i7 prime95 runs 8 tests at once to put everything under load, then I use RealTemp 2.5 to get the numbers. Both the idle and load tests ran for 1 hour each with the room temperature set at 68 degrees. 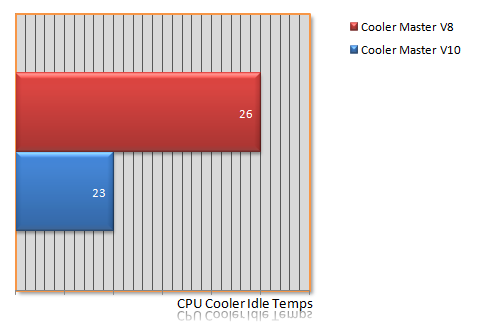 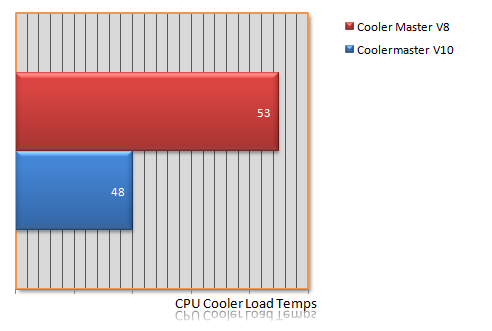 As you can see the performance numbers for the V10 are amazing. Part of the reason for that is the hybrid TEC cooling technology. TEC or Thermoelectric cooling worked by transferring the heat from one side of a pad to another. The way Cooler Master uses this is by running four heatpipes from the cool side of the TEC to the bottom of the heatsink. To dissipate the heat made from the 70watt TEC cooler they have a few heatpipes running up into a separate heatsink. The TEC cooler is set to only turn on at 37 degrees Celsius. This is measured at the top of the base, overtop of the heatpipes. That means the TEC cooler requires a lot of heat before it will even turn on. With our load numbers hitting a max of 48 degrees at the core I'm fairly sure that is very close to the turn on point for the TEC cooler, if Cooler Master decided to they could turn the cooler on earlier and receive even better numbers! 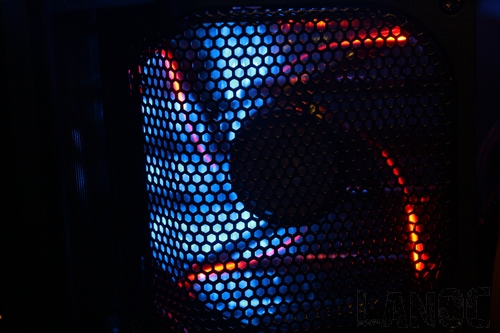 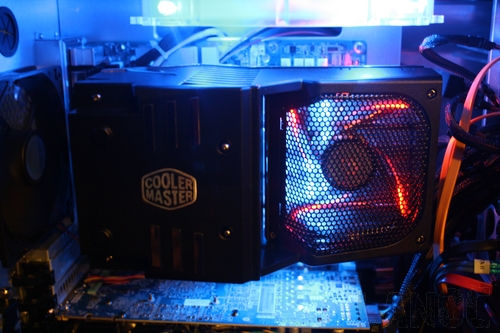 Once the TEC cooler on the V10 kicks in it's all over. The performance of the V10 is outstanding even when being compared to the great performance of the V8. Of course, with that kind of performance there has to be a downside. In this case, the size of the v10 can be an issue; during testing, I ran into an issue where I needed to access the ram multiple times, the size of the v10 made this very difficult. To add to this problem, just like the Hyper N520 the V10's mounting brackets bolt from the rear, meaning you have to remove the motherboard to remove the heatsink. I hope in the future Cooler Master will bring out a design that is a little easier to use but has similar mounting performance. The V10's size does lead itself to becoming more than just a CPU heatsink, the second fan blows down overtop of your ram and other motherboard components. This added cooling really makes the V10 a complete cooling system for your whole PC. At just under $140 dollars, this is pricey heatsink, the performance lives up to the price, but I would really like to see a full tube of thermal paste be included to help promote the value (Noctua and Tuniq have done this with great success). 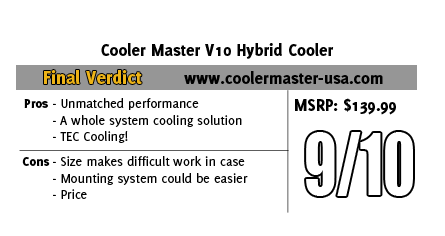 You might call him obsessed or just a hardcore geek. Wes's obsession with gaming hardware and gadgets isn't anything new, he could be found taking things apart even as a child. When not poking around in PC's he can be found playing League of Legends, Awesomenauts, or Civilization 5 or watching a wide variety of TV shows and Movies. A car guy at heart, the same things that draw him into tweaking cars apply when building good looking fast computers. If you are interested in writing for Wes here at LanOC you can reach out to him directly using our contact form.
Discuss this article
Log in to comment
Posts in discussion: Cooler Master V10 Hybrid Cooler

We have 1668 guests and one member online