Nintendo may have struck an untapped gold-mine with their latest console, but it seems to come at a high price for those of us who were once devoted and loyal fans.  The casual crowd is the company's target this go around, much to the dismay of the rest of us.  So for a lot of people, the Wii sits as a very expensive white paperweight in their home.  I, for one, often go months at a time without powering on the console.  Occasional flukes serve to breathe some life into the system, with first-party Nintendo titles being the most obvious.  However, what I've found to be a hidden gem on the Wii is the light-gun game remakes, as well as the new ones developed specifically for the Wii.  These games take the one advantage Wii controls have, ie pointing the controller at the screen, and utilize it in a very natural way.  Of course, when you play a light-gun style game, you are missing a critical component of the equation: the light-gun.  Simply pointing a Wiimote at a screen and imagining that you're shooting bullets out of it is kind of lame, so quite a few companies have developed light-gun shells for your Wiimote.     Thrustmaster, being one of them, sent us their Dual Trigger Gun NW to test on its own and against perhaps the most popular shell, the Nyko Perfect Shot.  Here's how it measured up...

Thrustmaster packages their light-gun shell in a typical graphic-covered cardboard box.  They utilise the standard white and blue Wii color scheme that we've all come to identify.  The front colorfully displays the product along with its two modes of use.  This is also illustrated on the two smallest ends of the box.   On the back a clear list of features is displayed in three languages, and the bottom provides a list of warnings.  There are no frills to this package: no see-through package, no flap to lift for more details.  No nonsense, efficient, functional.  Inside, the gun shell as well as the nunchuck are held in suspension by formed plastic.  Thrustmaster also provides a detailed instruction manual in case you can't quite figure out how to work their product. 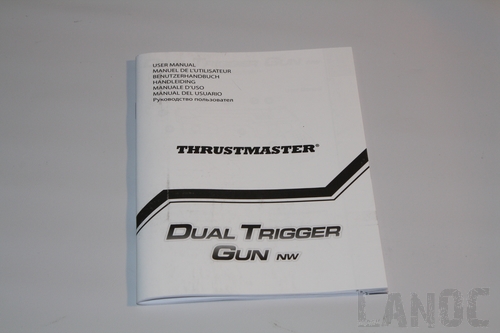 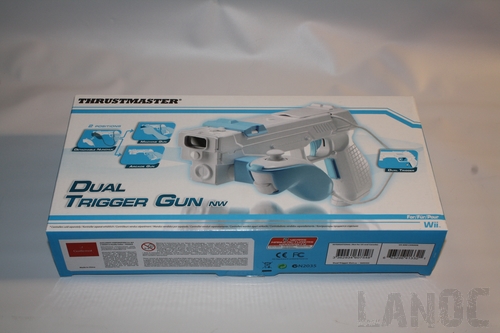 Fitting a Wiimote into the Dual Trigger is a breeze.  It slides in easily, then uses two hinged doors to fasten it into place.  The top "door" is blue and is placed squarely across the A button, allowing the secondary trigger to press it by pulling a sliding mechanism back against it.  A simple pull mechanism is used for the primary trigger, which pulls the B button.  Without the nunchuck attached, this mode is known as the "Arcade Gun" mode.  On the left side of the shell is a nodule on which you can attach the nunchuck holder.  This is quite nice since it allows you to use the gun without a useless piece of plastic attached.  If you do so choose to use a nunchuck, you will be in what Thrustmaster calls "Machine Gun" mode.  The cool thing about this mode is that there is quite a robust cable reservoir in the back of the gun, under the second door.   It is quite simple to stow away all of your extra cable with absolutely no effort.  This is one of the main differences between the Dual Trigger and the Perfect Shot, as with Perfect Shot there is no cable well.  The Perfect Shot merely routes the nunchuck port to the bottom of the gun.  Also, on the Perfect Shot, there is nothing covering the A button, so you have to press it manually.  Not that that is such a bad thing....

The first thing you will notice when you use the Dual Trigger is that it is extremely long, therefore front-heavy.  In comparison, the Nyko Perfect Shot is very well balanced.  Of course, this is offset by the Dual Trigger looking a lot cooler.  Response from the B trigger is superb, with little to no delay between pulling the trigger and the button being pressed.  Unfortunately, the same cannot be said for the A button.  The pressure mechanism used to press it down is ingenious, or would be if it worked.  In all my gameplay, I could only get the A trigger to correctly press the button a handful of times.  This proves to be  quite troublesome as a lot of light-gun games have a use for the A button.  For instance, House of the Dead: Overkill uses the A button as an alternate reload button and Ghost Squad uses it for action sequences.  So not only can you not rely on the A trigger, but also the mechanism that pushes it covers the button completely, preventing manual use when the Wiimote is secured tightly.  The mechanism can be removed from the top to enable easy access,  but then the Wiimote doesn't fit quite as snug.  In addition, the nunchuck shell, when attached to the gun shell, wobbles ever so slightly.  Not to the point you assume it will come off randomly, but enough so to be an annoyance.  In the end the A button fiasco really kills any advantage the Dual Trigger carries over the Perfect Shot. 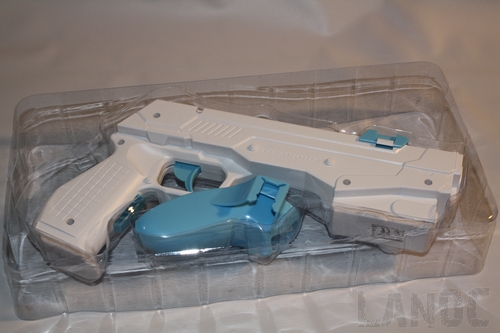 Thrustmaster's Dual Trigger Gun NW leads off strongly by looking much cooler and being more intimidating in size than the Perfect Shot, and at first it seems to do everything Nyko's offering does and then some.  However once you get around to the fact that the secondary trigger can't be relied upon, the only things the Dual Trigger has going for it are the cable compartment and the nunchuck shell.  What is worse is that a lot of the light-gun games are rail shooters which require little to no use of the nunchuck.  So at the end of the day, there is no practical reason to buy the Dual Trigger over any other shell.  Endgame: buy for looks. 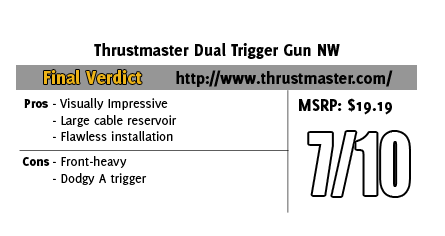 You might call him obsessed or just a hardcore geek. Wes's obsession with gaming hardware and gadgets isn't anything new, he could be found taking things apart even as a child. When not poking around in PC's he can be found playing League of Legends, Awesomenauts, or Civilization 5 or watching a wide variety of TV shows and Movies. A car guy at heart, the same things that draw him into tweaking cars apply when building good looking fast computers. If you are interested in writing for Wes here at LanOC you can reach out to him directly using our contact form.
Discuss this article
Log in to comment
Posts in discussion: Thrustmaster Dual Trigger Gun NW

We have 1351 guests and no members online