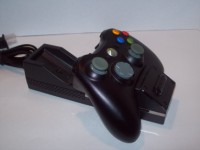 The next gen of gaming consoles finally found the salvation that had been hinted at ever since Nintendo tried incorporating a wireless receiver for the original NES. Wireless controllers have finally been adequately and correctly instituted into this current wave of systems. However, in doing so, two of the three leaders of console world, Nintendo and Microsoft, have become the battery companies' best friends. Granted, the controllers on any platform have a decent battery life, but if you find yourself with no rechargeables or replacements on hand, well, you're S.O.L. In the end, the former of the two, rechargeable batteries, are without a doubt the way to go (sorry Duracell), not only saving you from constantly purchasing replaceable disposables, but also allowing for convenient charge methods. Today, we sit down with Nyko's latest, the Charge Base 360.

With so many options available to the consumer, its not always easy deciding what to buy. Charge stations are no exception. You need to be able to see what you're buying, what it supports, and the endurance of the product, especially if you're wading into the more expensive waters. Nyko has packaged the Charge Base 360 in a clear plastic, showcasing the base from three of the four sides (the back, or bottom, is omitted), with the features clearly listed on any of the given sides. The package opens much like a cardboard box, allowing for the tray holding the base, along with the AC adapter and instructions, to slide out. From here, its fairly simple; there no assembly to be done, save switching Nyko's battery pack for the pack currently in your controller. 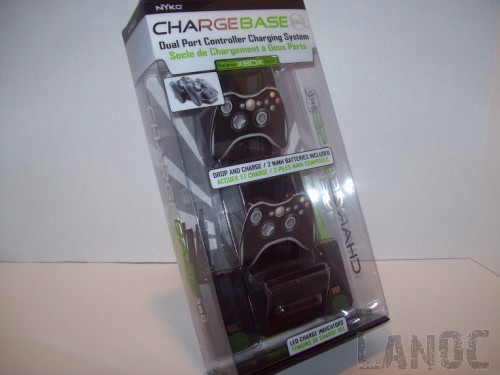 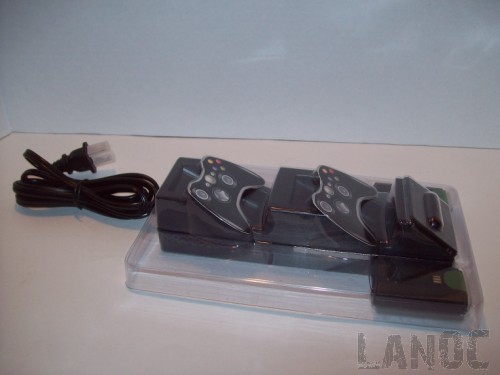 Let's be honest: you paid the extra $100 to get the black 360 Elite, you waited until Wal-Mart had four black 360 controllers in stock, and damn it, you don't want to settle for a white Quick Charge Kit. Nyko's got you covered, offering the Charge Base 360 in both black and white (no red yet, sorry RE5 fans). The base itself is made from a heavier plastic/metal to keep if from moving, shifting, or perhaps becoming unbalanced should the situation arise. The two included battery packs are not the traditional Microsoft packs; Nyko has broken the mold and added two diagonal ridges on the back of the pack, a small but nice change. 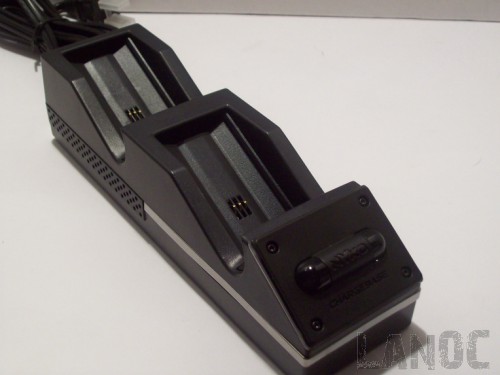 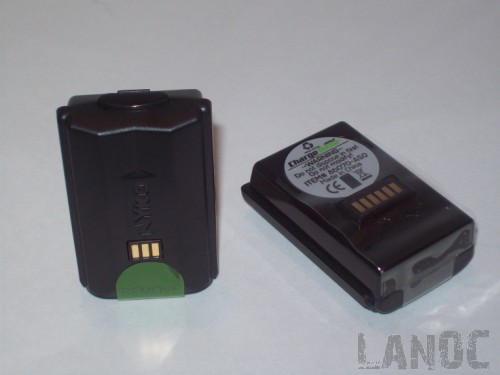 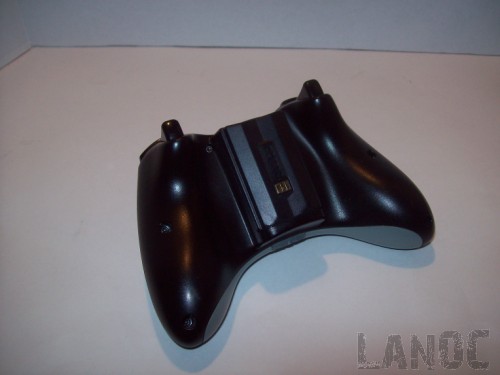 Also on the back is the exposed metal prongs that lay against the base to actually charge the battery. This is one area where some charge stands fall short by requiring just the right angle or a little tweak to the left for the two pieces to meet correctly and charge. Nyko, however, passed the test, practically allowing you to toss the controller on to the base and it would connect perfect. On the front of the base are two semi-oval lights, each corresponding to a separate pack (the north or the south). Here's is common mistake number two: many, many companies go overboard with these LED lights that indicate the status of the battery pack. Since the vast majority of consumers charge their controllers at night, in the same room, it can become a huge turn-off fast. At first look, the lights on the Charge Base 360 looked like they would be the same; they're large, protruding, and though they look cool, I could only imagine the power of the bulbs underneath. Even after plugging the base in and placing the controllers in the hoslter (the packs come uncharged), the red lights looked demanding. However, I was impressed when I turned the room lights off and the base wasn't any more noticable than perhaps the red charge light on a cell phone. Furthermore, once the pack has completely charged, the lights turn green and eventually turn themselves off. 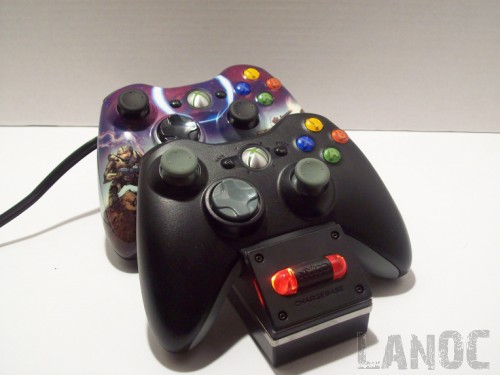 I wanted to test the actual charge time of the packs, so from the moment I placed the dead battery packs into the controllers and subsequently onto the charge base, I flipped on Adult Swim and kept and eye on the LED lights. Pretty close to two hours after doing so, the lights flipped green. The Microsoft Quick Charge Base takes two hours for one pack, and nearly four if you're charging two at a time. Though Nyko does advertise that two simultaneously will take nearly four hours as well, our test had more impressive results. The Charge Base 360 battery packs also have a play time of up to 25 hours, thanks to Nyko's custom NiMH batteries. Though the need for an AC adapter may seem irritating, a wall outlet does charge batteries faster than a USB connection. The only draw back to this, and any Charge Base, is that you obviously cannot use the controller while its charging, as opposed to Plug and Charge options. However, unless you and your buddies are clocking in over 25 hours of gaming sessions consecutively, you should have no problem keeping a charge on a battery pack if you dock the controller while not in use. And though it may seem like a given, the Nyko Charge Base 360 batteries have no affect on gameplay, either.

Compared with other chargers of its kind, the Charge Base 360 excels in several areas. It's offered in both black and white, an option that, working in game retail, I've seen be the deciding factor alone. Its advertised to charge just as fast as its competition, and performed beyond that in my test. You may find a few problems with preference, such as the need for an open wall outlet or the absence of the controller while charging, but the former is ideal for charge speeds and the latter similar between all charge bases. The Charge Base 360 just simply looks good, from t he base itself to even the finest detail such as the battery pack, and is made from some quality material, as opposed to some charge bases that are just hollow plastic and cords. And for the same price as the top competitors', the Charge Base 360 is one heck of a deal. 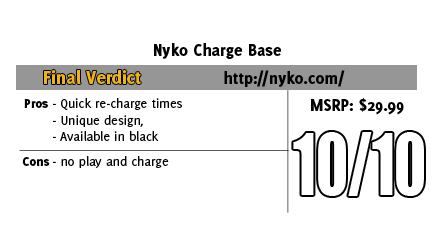 You might call him obsessed or just a hardcore geek. Wes's obsession with gaming hardware and gadgets isn't anything new, he could be found taking things apart even as a child. When not poking around in PC's he can be found playing League of Legends, Awesomenauts, or Civilization 5 or watching a wide variety of TV shows and Movies. A car guy at heart, the same things that draw him into tweaking cars apply when building good looking fast computers. If you are interested in writing for Wes here at LanOC you can reach out to him directly using our contact form.
Discuss this article
Log in to comment
Posts in discussion: Nyko Charge Base 360