It doesn't matter what your interest or hobbies are there will always be a group of people who aren't happy with having the same thing as everyone else. Because of that people "mod" or modify just about anything you can think of. There are large industries just about creating parts specifically in the automobile industry and more recently the computer industry. You will find those same people in the console gaming community, people like Ben Heck have made a name for themselves doing just that. Because of that popularity there are company's now that make parts to help you along if this is your thing. XCM is one if not the biggest company that does this. Today I will be looking at a replacement case with led lighting for your Xbox 360 controller. This is very interesting for me both because I love to mod everything and because I hate how I can't ever tell the difference between my Xbox 360 controllers. I'm hoping that this case will satisfy both of those issues. 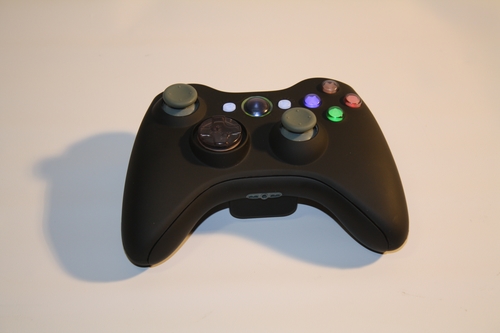 For Xbox Brand Wireless Xbox 360 Controllers Only (Warning: Not compatible with Wired Controller)
Light up your wireless Xbox 360 controller with this kit!
LED On/Off Switch
Top and Bottom Case Pieces included - Not just a top cover!
Easy to install - Only 3 wires need to be soldered for the Lights to work (optional)
** New ** D-Pad - Redesigned with more room for movement!
For a limited time - Includes special screwdriver tool to open the controller case!
*feature list taken from https://www.extreme-mods.com

The controller case was packed in a box that's about as simple as they come. The only writing is on the ends; even then it only says All Black + D Pad. This isn't really the kind of item that you will find in your normal game store, considering the work needed this is for a small group of people. Because of that you will only find it online, giving them no reason to go fancy on the packaging. Inside the controller case was inside of a lightly padded bag. XCM packed the triggers and included specialty torx driver in a separate bag also in the box. 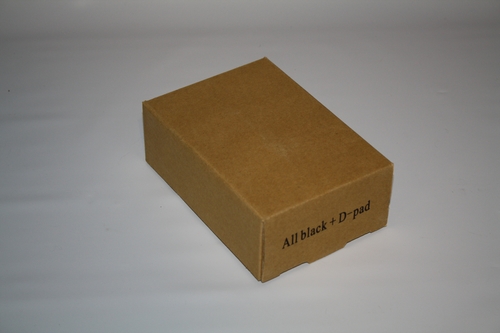 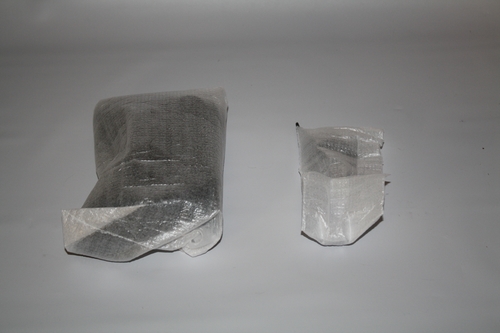 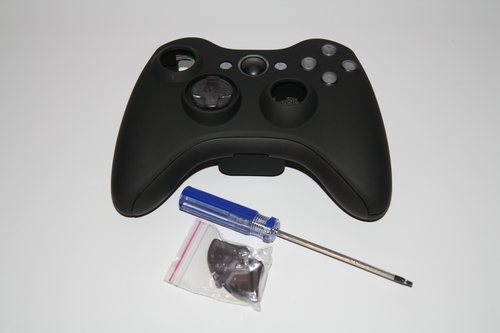 Due to my background in auto mechanics and my experience soldering I wasn't to worried about jumping into this project. If you aren't comfortable soldering or taking things apart you may want to ask for help. 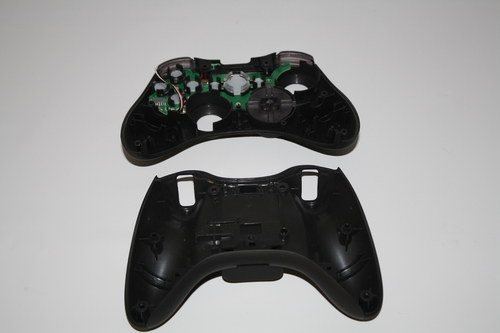 XCM including the specialty tool needed was a major bonus with this kit. I started by picking out a cordless controller and laying everything out nice and neat. I looked around for the included instructions and then realized they didn't have any. This wouldn't due, I could swap the cases but when it comes to knowing where to connect the wires it was important to have some instruction. I dug around online and found instructions HERE.  The pictures were very helpful and broke down step by step what was needed to be done. 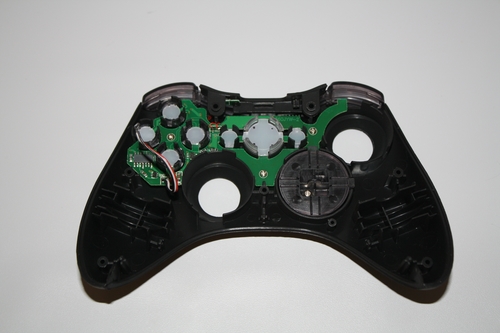 Everything went smoothly until I went to install the triggers, it turns out I had two left side triggers. XCM was very apologetic and sent out another trigger right away, these types of problems will happen sometimes. I couldn't find any issues online that would show this was anything but a once in a 1000 fluke. The instructions came in handy when removing and installing the triggers, there is a specific way to do them or it won't come off.  Next I was ready to solder the three wires onto the necessary spots. It is a little tight but my biggest problem came from the length of the wires, longer wires would have made this go much smoother. With everything soldered up I was home free putting everything back together. 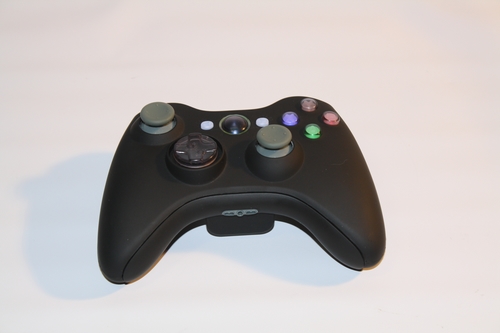 Some times when I'm doing a review the testing can be a chore or a hassle. Today Isn't one of those days, I get to play Xbox 360, something I would enjoy doing anyhow. The controller shell itself is the same shape as Microsoft's original so comfort was never going to be an issue. The black coating has almost a grippy rubber feeling that managed to make the controller more comfortable.  Turning on the controller let the led's to light up, with the lights on the controller looks amazing. 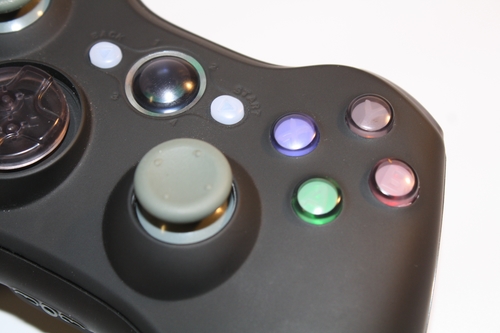 Jumping into a game of my old favorite Call of Duty 2 I was able to give the controller a workout. All of the buttons functioned. I did find the triggers to be squeaky, the sound was a spring sound. I can best describe the sound as the same as an old screen door. The issue of course could have easily been an installation issue by me. 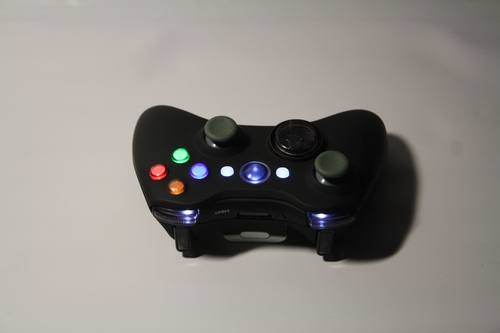 I did find it difficult to install the battery into the controller. After a few times it started to loosen up, the coating makes the clearance a little tighter. Outside of a small issue installing the battery and a noise that could have been caused by me the performance of the controller case from XCM was great. 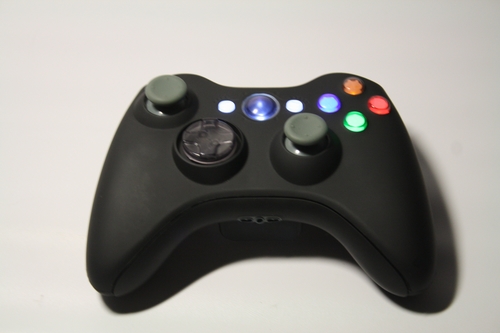 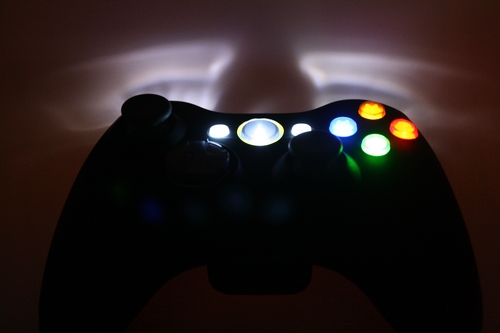 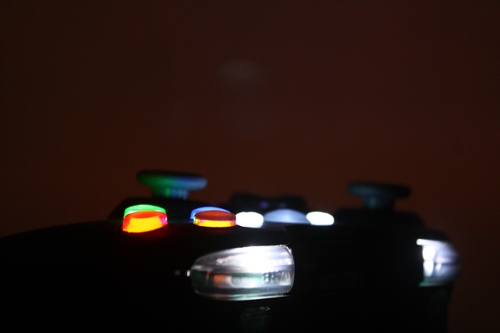 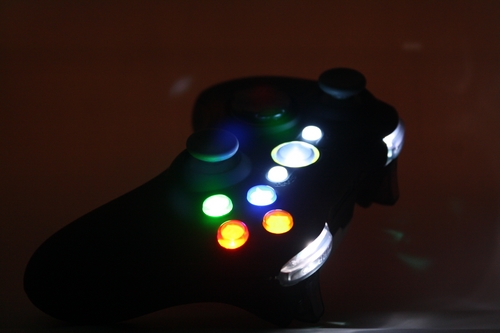 If you are tired of looking at the same ol Xbox 360 controller over and over this could very well be perfect for you. The rubber like coating makes the Xbox controller more comfortable, durable feeling, and easier to hold onto. The lighting makes it easy to see what buttons you're hitting in the dark but is mostly just to show off. The installation isn't for amateurs but with some soldering experience you shouldn't have to much trouble getting it all together. The wires needed for soldering are a little on the short side, and will be the only major obstacle during the installation. That is of course once you find a copy of the instructions online. Even with the issues I would still recommend the XCM controller case to anyone looking to make their controller stand out. In fact I would like to get a few more to make each of our controllers look different, you can find them in Clear, Red, Green, Black(as reviewed), and chrome. XCM's official us retailer is https://www.extreme-mods.com. 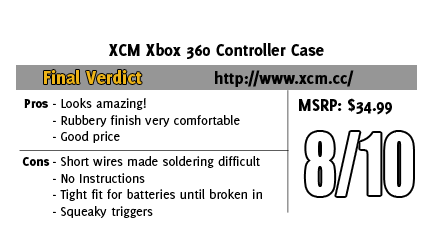 You might call him obsessed or just a hardcore geek. Wes's obsession with gaming hardware and gadgets isn't anything new, he could be found taking things apart even as a child. When not poking around in PC's he can be found playing League of Legends, Awesomenauts, or Civilization 5 or watching a wide variety of TV shows and Movies. A car guy at heart, the same things that draw him into tweaking cars apply when building good looking fast computers. If you are interested in writing for Wes here at LanOC you can reach out to him directly using our contact form.
Discuss this article
Log in to comment
Posts in discussion: XCM Xbox 360 Controller Case

Nicky9892 replied the topic: #15374 26 Apr 2011 12:42
I think it is great that companies are starting to pick up on this trend, and bring the ideas that people like Ben Heck have come up with and making them commercially avaiable.

I would really like to see someone start producing the Xbox 360 in a 1970's Atari enclosure - very cool peice of retro kit.

We have 1459 guests and no members online