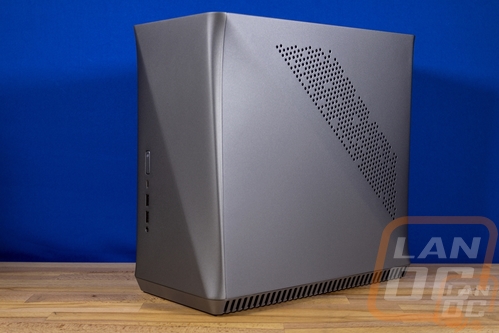 Most ITX cases don’t have too much going on, but the Era ITX is a little more interesting because Fractal has integrated a surprising amount of modularity. This means you have a lot of flexibility in the components you can pick out, but it does also add a little more to the build. Once you first get a look inside of the case there are a few brackets that you may or may not end up using so initially it looks really cramped. Not that it isn’t cramped, but it looks worse than it actually is. This is because of the hard drive/SSD bracket that covers the entire left side of the main opening as well as the PSU brackets on the right. The left hard drive bracket is interesting because it does have mounting holes for two 2.5 SSDs or one 3.5-inch drive which offers options. The full interior is a dark grey powder-coated finish with a slight texture and they stuck with that same color and finish on all of the different exterior color versions and it looks good with them all. 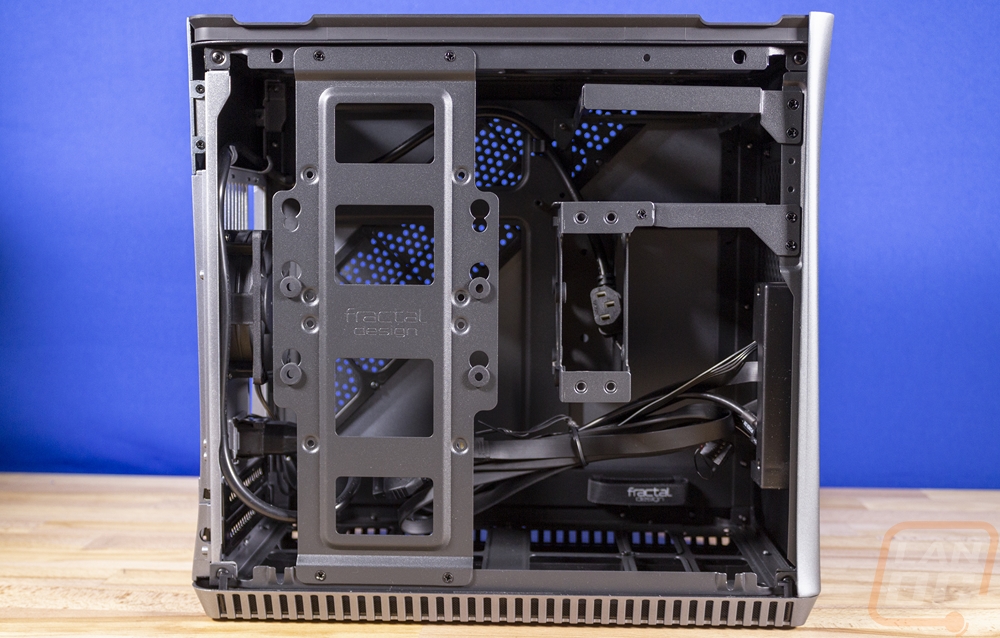 The back of the interior doesn’t actually have much going on. There is a gap between the side panel and this motherboard tray, but it isn’t very thick. The motherboard tray does have a large CPU bracket access hole but it isn’t orientated high enough for some AMD boards. The left has a large opening the full height and there is an opening at the top as well which depending on if you run water cooling or not can leave a lot of room or just a little room. 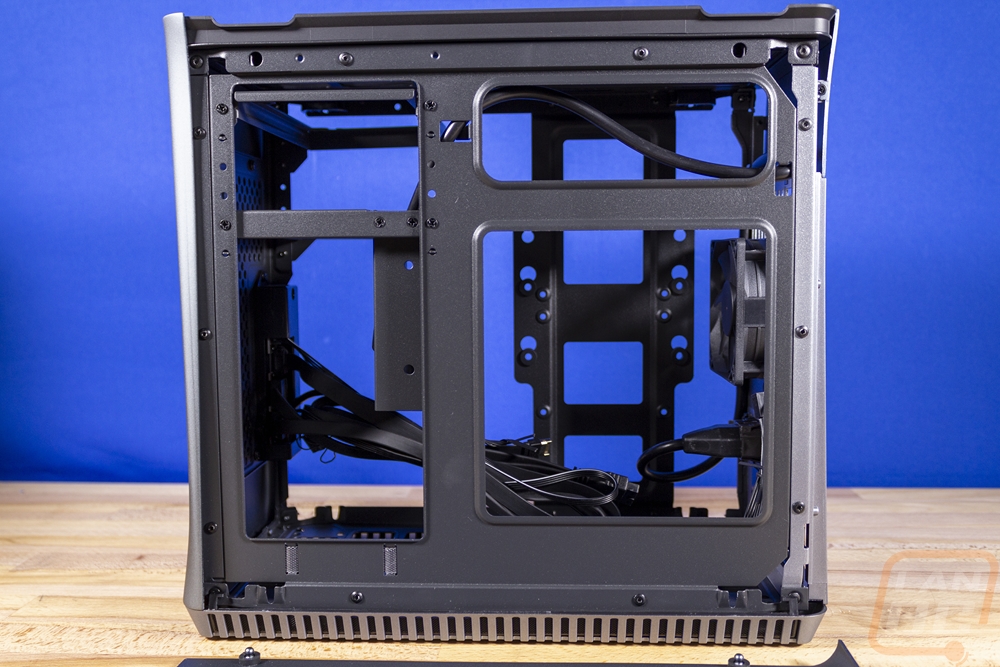 The side panels, like I mentioned earlier are all aluminum which is nice. For the hidden mounting, both panels have pegs sticking out of them that pop into the case so they can be pulled off from the top. Each side panels pegs have two long legs and two short with rubber mounts. The side panels also have removable intake filters on them which combined with the top filter and the hidden bottom filters makes the entire Era ITX filtered with cleanable filters no matter what orientation you lay your fans out. The only exception to that is the rear fan which comes installed as an exhaust. 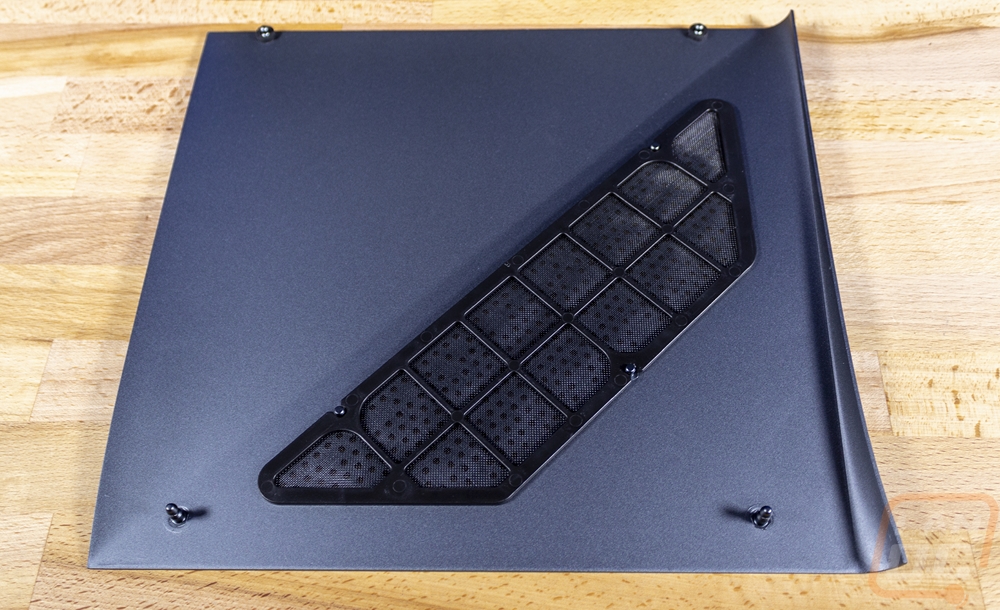 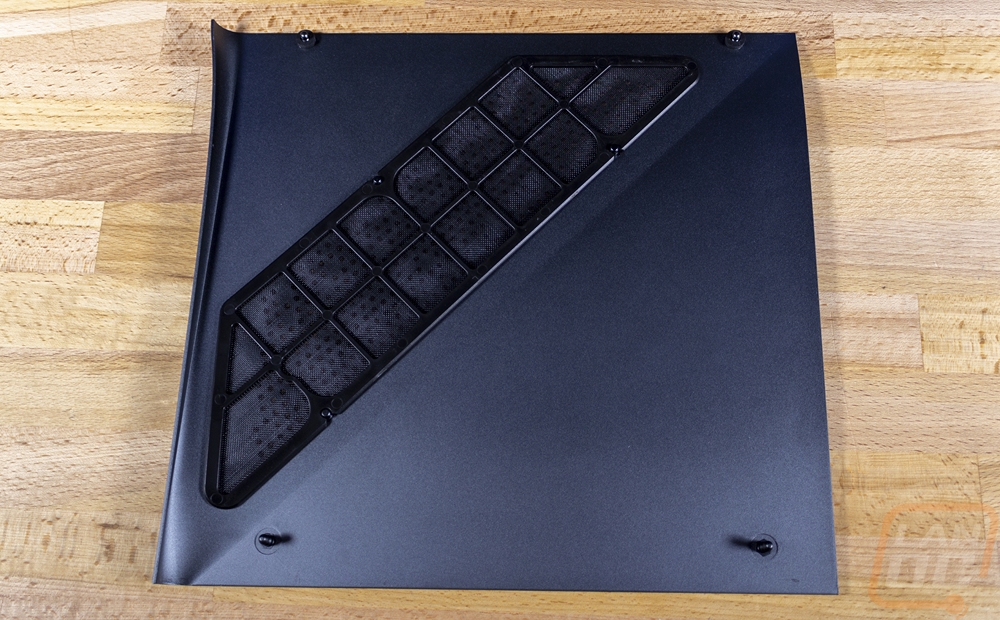 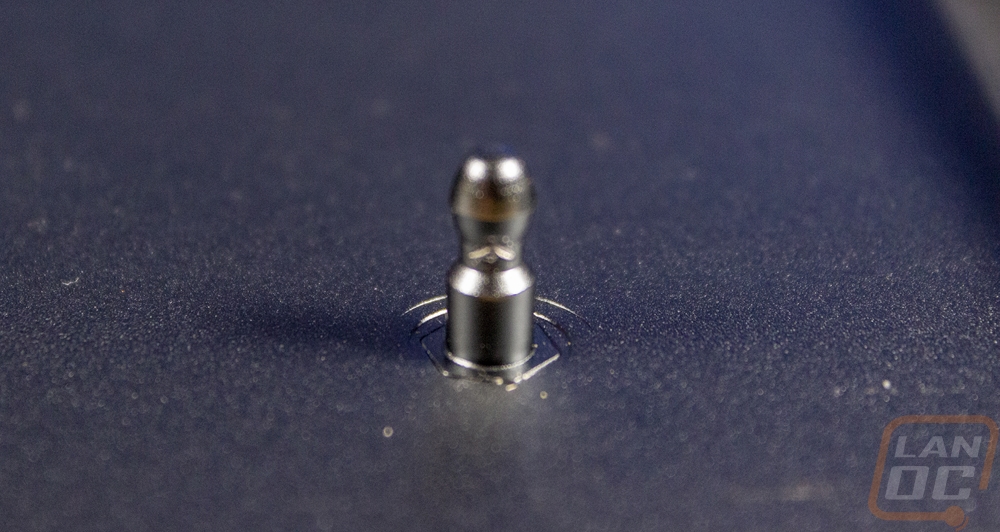 The main portion of the case that allows for the modularity is on the right side. There are two brackets and both come installed from the factory. They are both power supply brackets and you will only use one or the other depending on the layout you want to go with. The top is for an ATX power supply and the bottom is for SFX. The SFX bracket has an additional bracket attached that is also removable which can mount a 3.5 or 2.5 SSD or hard drive. I personally prefer to run SFX PSUs in all of my SFF builds, even when they call for ATX just to have the space. But having the ATX option is nice. But just know, what PSU you go with will determine everything else about your build. When running an ATX PSU you can’t also include a 240mm AIO in the build but you can still go with a full-length video card. If you have an SFX-L PSU you can pick between a 240mm AIO or a full-length card and a standard SFX PSU will allow both. 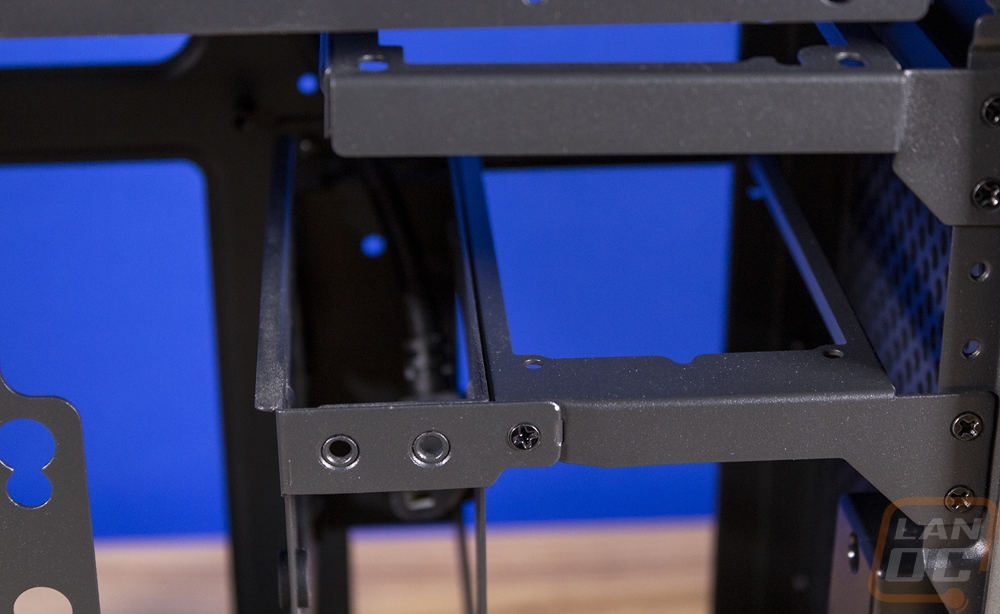 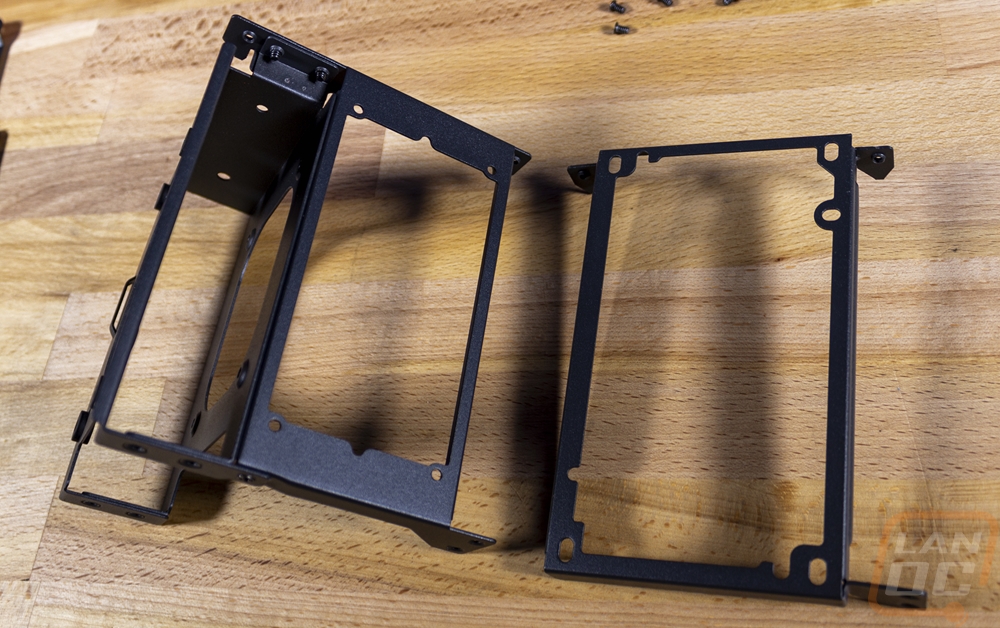 I’m sure you might be wondering how the different PSU sizes affect both the AIO mounted at the top and a full-length GPU at the bottom. It is because those mounts have 5 different mounting heights thanks to the 6 holes on the right and the five at the back of the case. Depending on what components you run you can move it up or down to get the most out of the space. I’ll talk more about it, but the instruction manual does a great job of showing some of your options including the possibility of not running a dedicated GPU at all and mounting additional fans at the bottom for high airflow. The front also has all of the front I/O cables running out of it so you have to work around those as well. The plastic cover that protects the front I/O PCB is also removable which can be needed to get your long video card in sometimes. 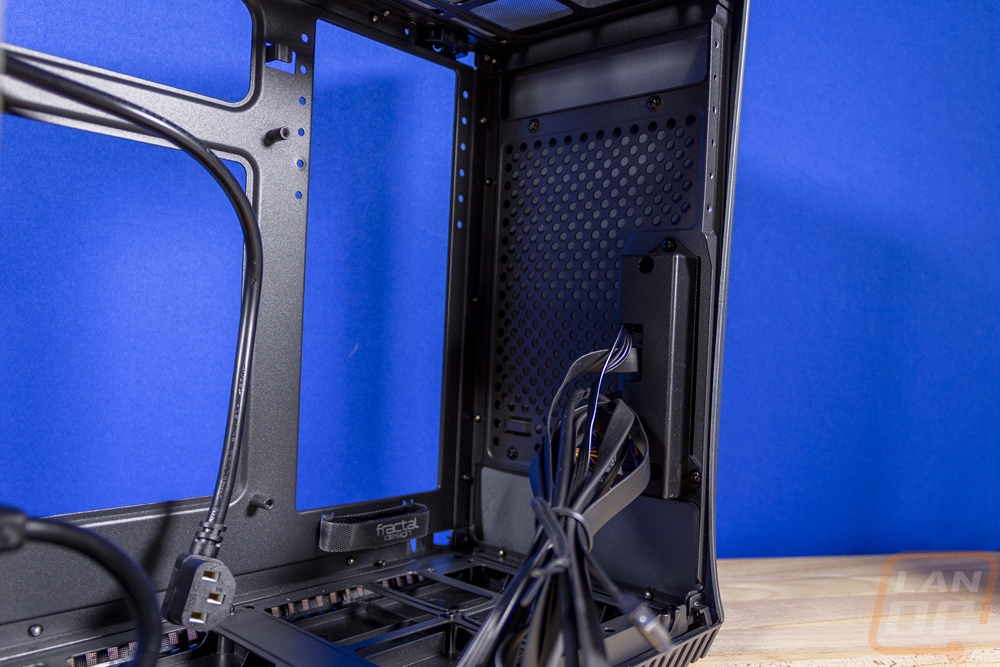 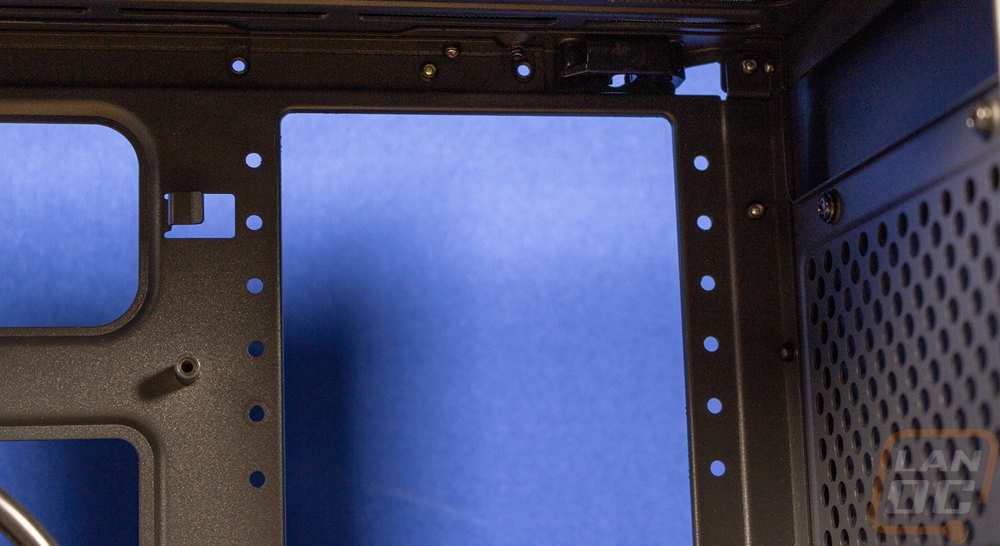 With all of the brackets removed, the Era ITX looks a lot more spacious inside. You can see that on the left the motherboard mounts towards the bottom and the standoffs are built-in. The rear exhaust fan is preinstalled and can be adjusted up or down but the power plug is also here and sticks out a LOT. I really wish this was right-angled for a better fit, but I do understand that it is a component that isn’t normally custom made. I mentioned bottom-mounted fans, you can see that the bottom does have some openings cut into it along with mounting holes for 140mm fans. The vents along the sides on each side of the bottom is where that air goes/comes from and those do also have built-in removable filters. It is hard to see but there are tiny tabs on each side to pull them up for cleaning. Over on the right side, under where the power supplies mount Fractal also included a built-in Velcro scrap with their logo on it. 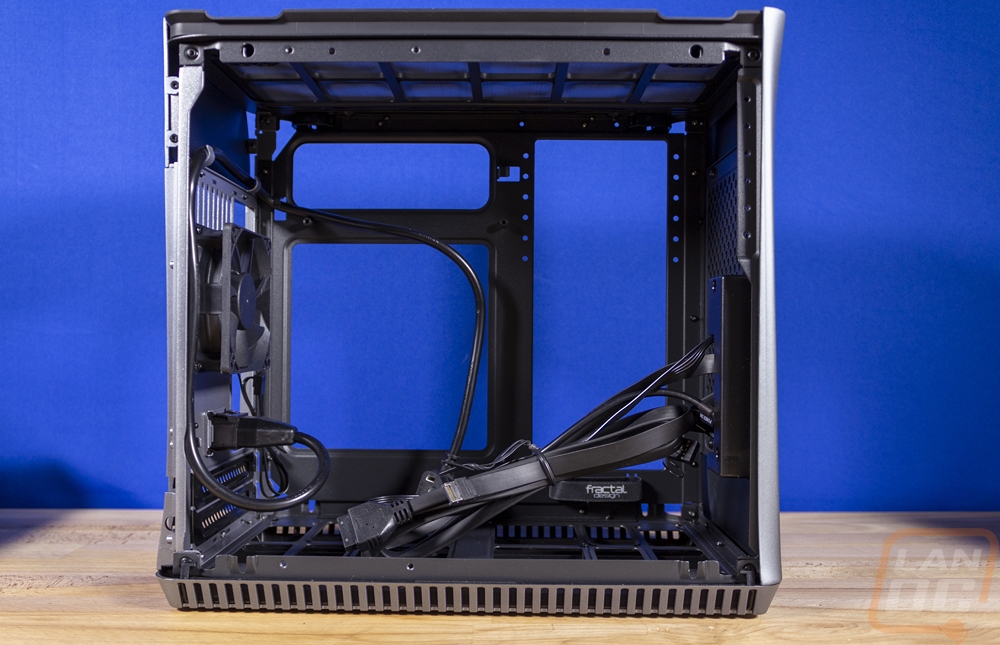 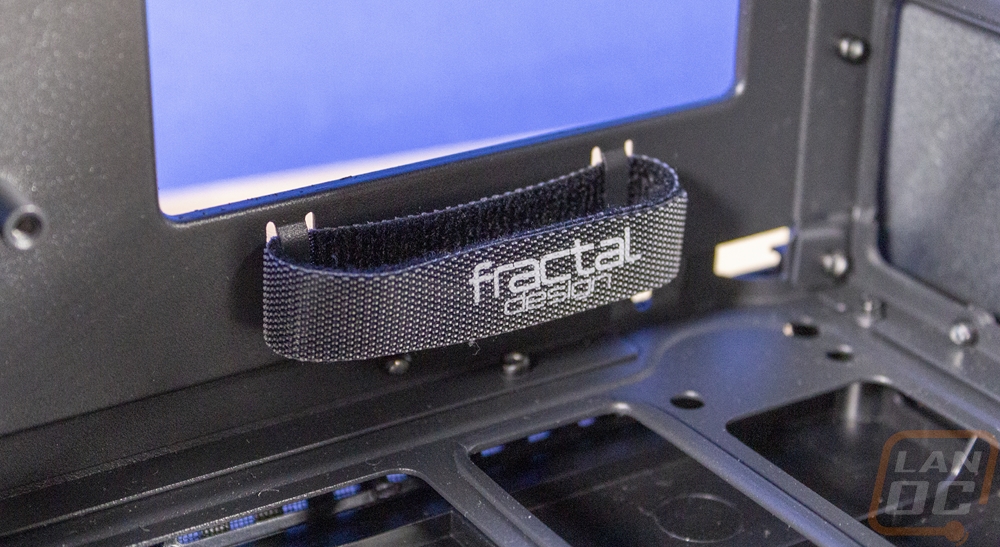 I mentioned earlier that the Era ITX has a Type-C connection on the front panel. That means inside it has the new style Gen 2 plug as well. I also want to point out how nice all of the cables are. The normal USB 3 cable is split in half and has two flat cables and the Gen 2 cable also has a flat cable making them all a lot easier to work with. They are also all blacked out which matches the dark gray interior. 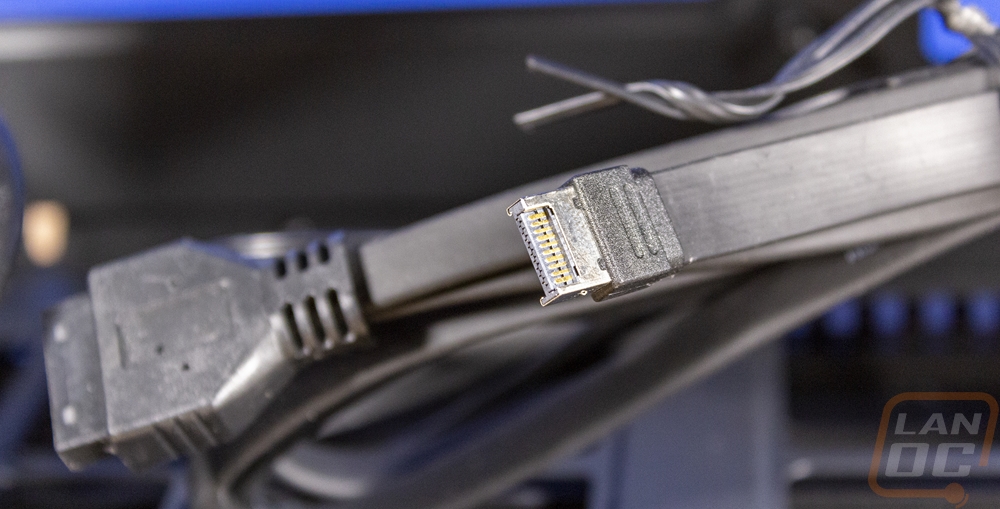