For performance testing, there were three areas that I wanted to test out. Software to check out how you control the Wave:1, especially with Elgato specifically calling this a mixer and a microphone. Then we have normal microphone performance. Then lastly, all of the other aspects like how the included stand works, the controls, etc.

So I thought that maybe with this being a new launch that it might be integrated with Corsair’s iCue software. But like with the Stream Deck the Wave:1 has its own software. That worked well for the Stream Deck which iCue could learn a LOT from, so I can’t fault them too much for sticking with the solo software. It is called Wave Link and once installed you just have this one page which keeps things extremely simple. It has a list of different inputs at the top and down at the bottom options for your outputs. Hey, they weren’t kidding when they said this was also a mixer! 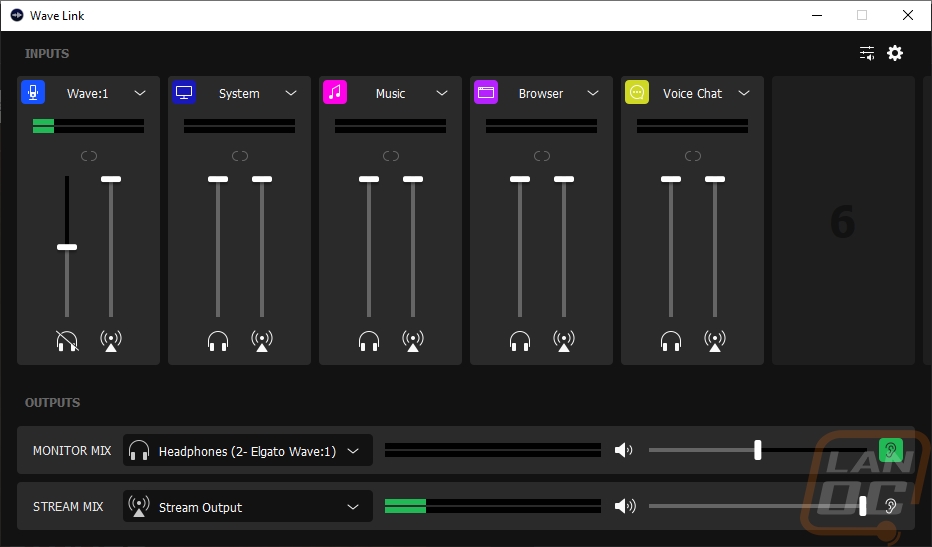 So in the outputs section down at the bottom, you have two outputs at all times. One is called the monitor mix and this is what you hear. Then Wave Link created virtual outputs to let you have a second mix that is completely different which they call the stream mix. This is a huge feature, they are integrating Virtual Audio Cable which I have used in the past to be able to tie things in together like this. Down at the bottom you can pick which device you want to monitor things on and there is a meter next to that mix along with volume control for it. Then you have a stream mix and clicking the drop-down here just opens up a box explaining that for your streaming software you need to select the Wave Link Stream source that they have created and this will then let you control what your viewers hear apart from your own audio. 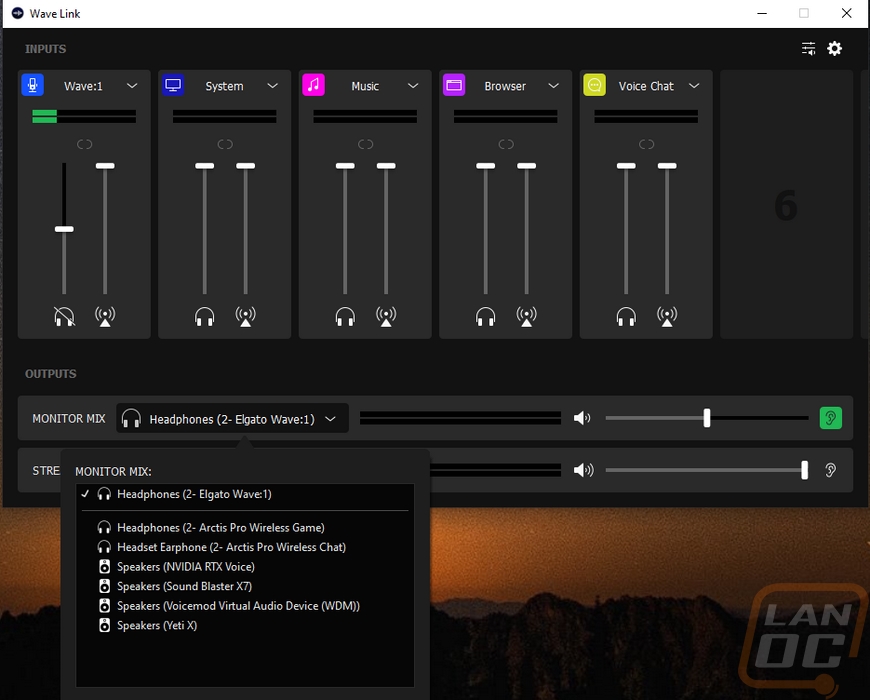 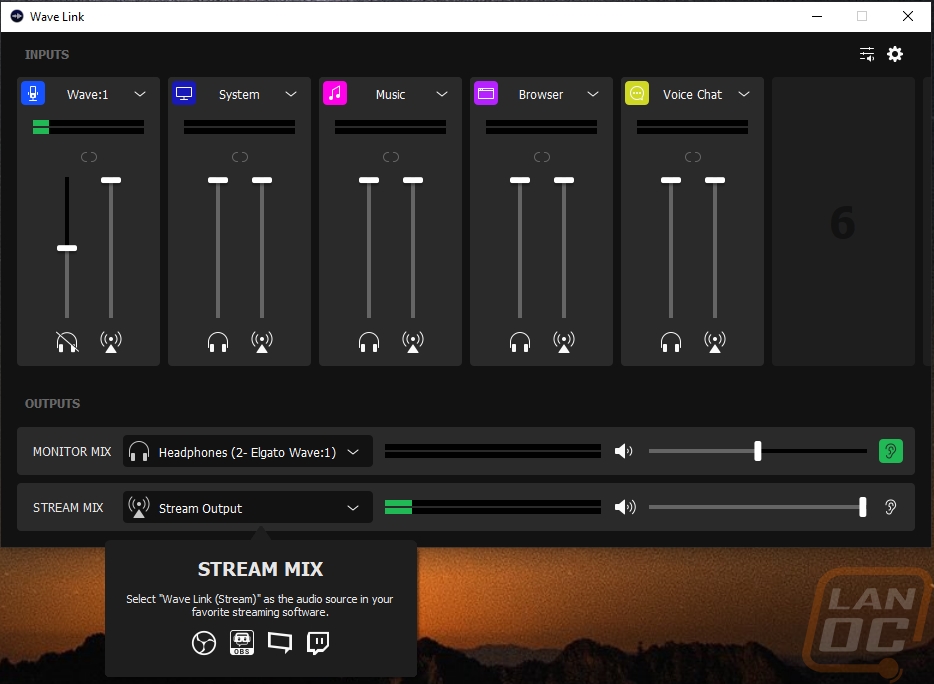 Then for inputs, each input can be selected up at the top. You can rename them and control different things. For the Wave input, this is from the microphone. So you can adjust the gain, the overall output volume, and the microphone/PC mix. Selecting any of the other options has a different set of options that let you pick an input. Then once setup you can see meters to show the audio level, even if you have things muted. Then each has volume control for both your monitor mix and stream mix. You can also click on the icon at the bottom for a full mute. Here you can make music quite or muted for your stream (DMCA) but still listen to music. I’ve done this in the past by outputting my music to my speakers but then using my headphones for voice chat. You can do the same for your browser, letting you double check to make sure something doesn’t have anything inappropriate in the audio before showing it on stream. 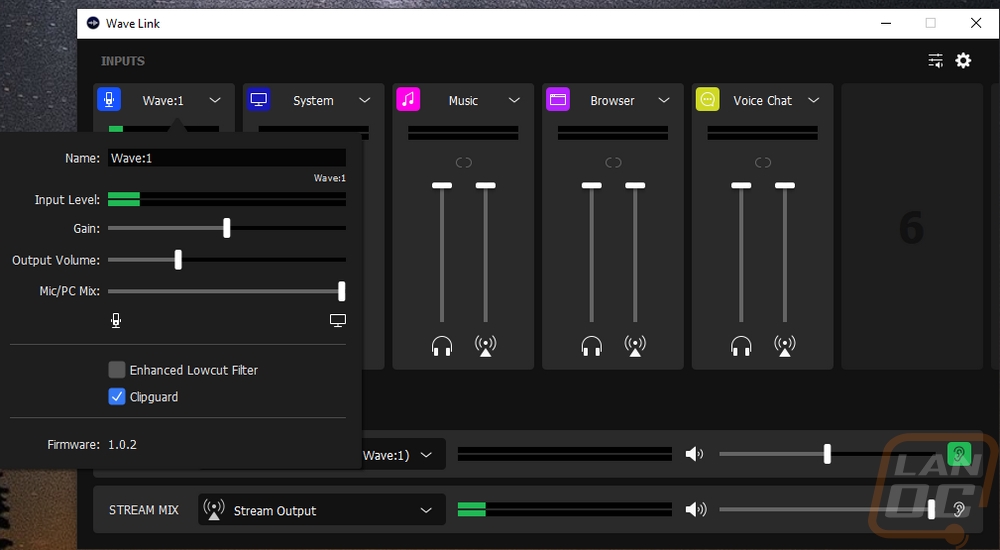 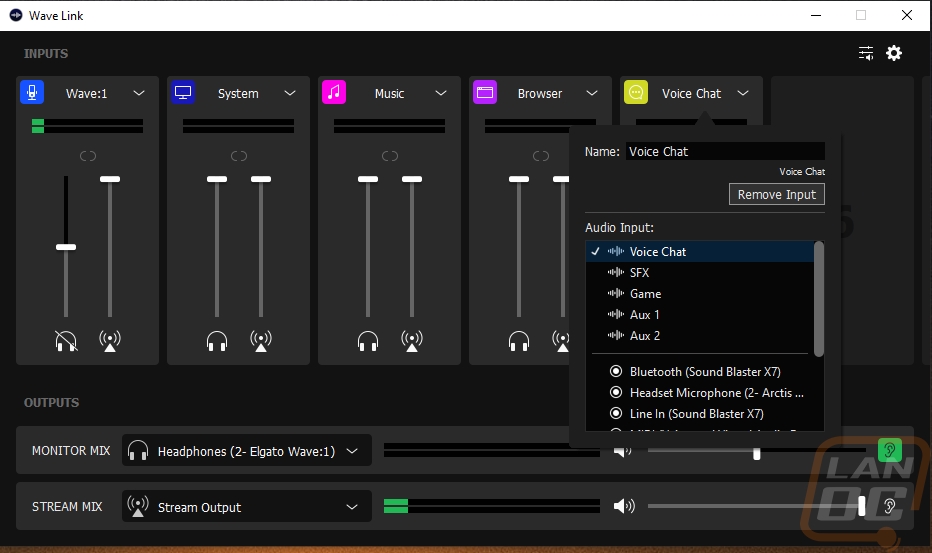 The only other option in the software is the gear for settings. This gets you the check for updates button and the software version. You can also set if the software turns on when you boot up or not. 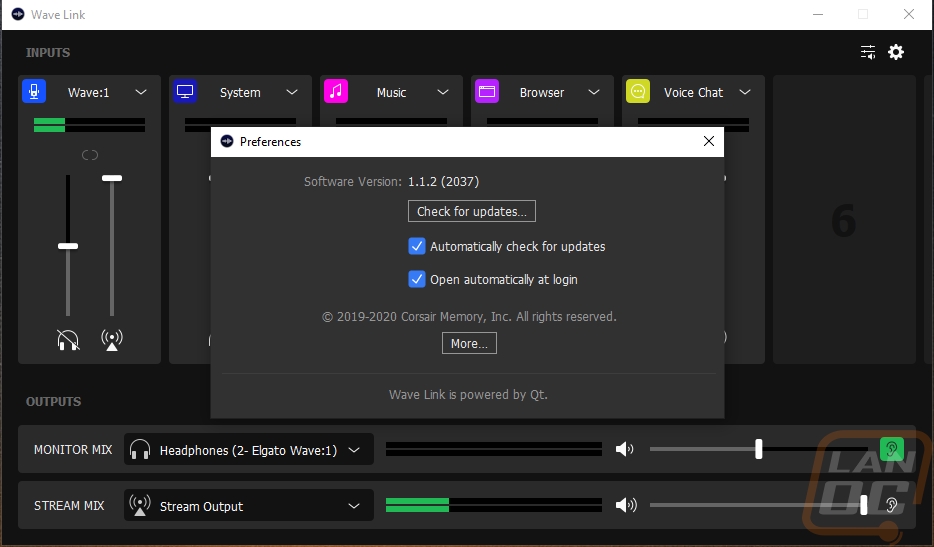 So the other half of this equation is using the Windows 10 app volume and device preferences page and they do make it easy to get to with it sitting next to the gear with the slider button. Here you can set different outputs and inputs for different programs. Which if you are like me and have multiple headphones, speakers, and each monitor has audio you can use this alone to do some crazy stuff. Seriously, you can set up a kid to watch something and lock it to a specific pair of headphones. Or if you are fancy you could output audio from a specific app to say your whole house speaker system while playing DIFFERENT audio somewhere else. The way Wave Link works though is each of those inputs in the software (which you can create as many as you want) also creates a virtual audio device for windows. On this page, you set the corresponding program to output to it. So say you have Spotify installed, you would want to set that to output to Wave Link – Music. That way the wave link software picks it up and you can control how much your stream hears and how much it doesn’t. The only downside is that your web browser can only be set to one, so you couldn’t set that page by page. 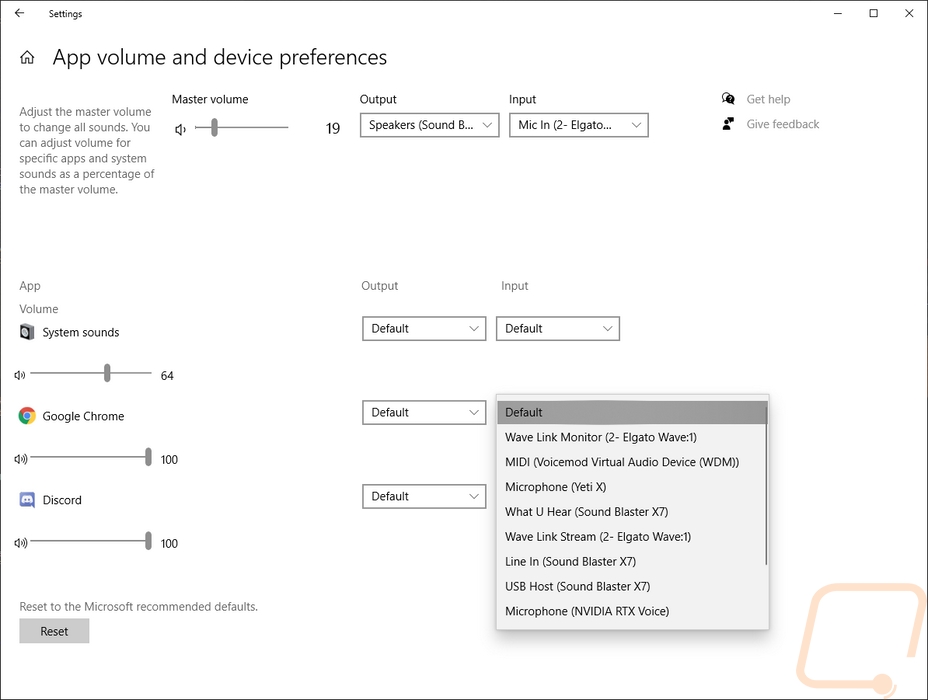 For comparison testing, I put together a video comparing the Wave:1 against a variety of products. This includes the Yeti X that I just recently reviewed as well as an older Razer Siren for desktop microphones, a whole variety of wired and wireless headsets, a few Mod-Mics, and even a webcam microphone for comparison as well. I’ve left the video below to let you decide on how each of them sounds. Being a desktop microphone, the Wave:1 does pick up exterior sounds like your keyboard and mouse. The Wave:1 was shockingly sensitive when I turned the volume all the way up. When listening to myself talk at that level, not only did it pick up every PC sound in the house but it was picking up the sound from the headphones I was wearing and echoing. I’ve never had that happen before. My testing was done closer to 75% of volume level but I would most likely run a touch lower in voice chat to help cut out more sounds like breathing. The difference between the Wave:1 and the Yeti X set to cardioid only came down to the difference between being mounted to an arm and sitting on the desktop. Both picked me up perfectly and they also stand out and show why a desktop microphone is the way to go when you compare against all of the headset microphones as well except for the Mod-Mics.

As far as the other aspects of the Wave:1. For starters, I love the integration with the shock mount and Elgato’s Multi Mount setup. But even the stock stand was surprisingly good with the heavy base combined with the plastic mount up top to help cut out at least some vibration. My only other usage issues came from moving from the Yeti X which has a built-in volume meter to let you quickly see how loud you are and to go with that the volume knob controlling the microphone volume which the Wave:1 doesn’t have but are both features on the Wave:3. I don’t mind the single pattern design that they have gone with, at least for at your PC use. I would most likely look at a different microphone for doing a podcast unless I wanted to use more than one microphone. I also think the more compact size helped a lot, when I used the Wave:1 with the original stand it didn’t block my monitor like the Yeti X did, and even on the arm, it is less in your face, even with it being right up in my face. 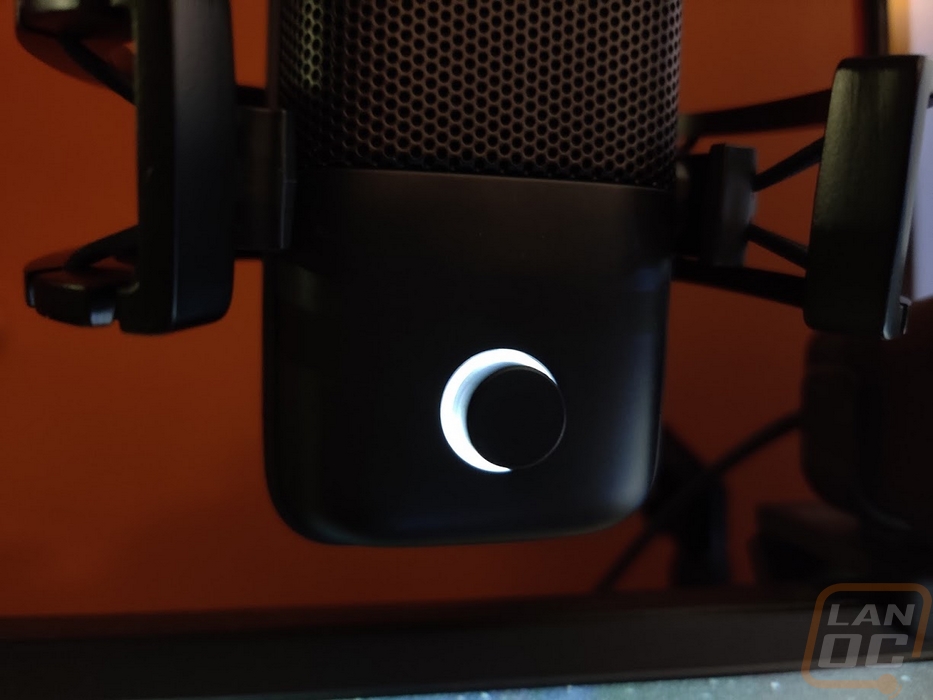 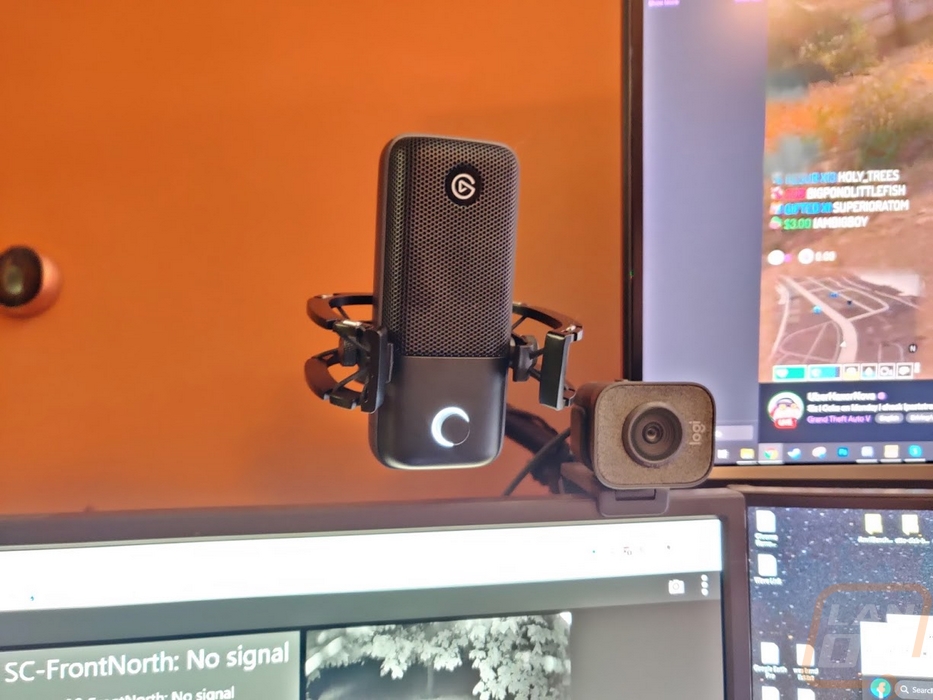