Coming in to my testing with the Wave:1, I was excited to see what Elgato would do differently than everyone else. They have shown themselves to be great at looking at the streamer market and being able to spot openings where companies aren’t making anything at all like with their Stream Deck and green screen. Or at least not making anything focused specifically at streamers when it comes to products like their key lights and capture cards. But when it comes to microphones, multiple companies have been making them for a while now. Blue Microphones is well known because of their Snowball and later Yeti microphones. Well, the big thing that they did was actually on the software side where they have included a full and proper mixer to let you control multiple sources audio output to both your stream mix and your monitoring mix. Something that a lot of people have been using more traditional mixers for.

Beyond that, though I like the singular focused design that doesn’t worry about having multiple pattern types which means one less button or option for people who don’t know anything about audio to worry about. Small details like the USB connection being at the back and it being Type-C which is a little stronger is nice, especially after having problems with our Yeti cord. But it is the accessories that you can go within the “Elgato Ecosystem” that impressed me. The Wave microphones have a few exclusive accessories like a shock mount and a pop filter which at least for the mount most good microphones have as an option. But even the extension pole for the base is a nice way to let people set the Wave:1 up to the height you need. BUT if you go with the shock mount you can drop the original stand altogether and use their Multi Mount to mount it up over your monitor and potentially even integrate a key light and or camera mount as well. Diving into that end of things can get expensive compared to other options on the market. But Elgato at this point is kind of curating things to make it easy for a streamer to throw down and upgrade their setup all at once without having to spend time shopping for each component.

Now the Wave:1 wasn’t perfect. I missed not having control of the microphone volume with the built-in dial like I had with the Yeti X. I also missed not having an on microphone volume meter. Both of those are Wave:3 features however so really that would be a better option for what I am looking for. I have the software not integrating with iCue or past Elgato products listed here as well. It’s a great program, but I also like not having to run multiple programs when possible.

As for pricing, the Wave:1 has an MSRP of $129.99. This comes in right in line with the traditional Blue Yeti and from Razer, the Seirēn X has an MSRP of $99.99. If you are only talking about the microphone, the Seirēn X feature-wise is closest to the Wave:1. The Yeti does get you the tri array microphone for different patterns, not that I think that is a feature a streamer would need. But the Wave:1’s real variable is in the software where no one else is offering anything like it. I wouldn’t mind seeing the price come down a hair to be a little closer to the Seirēn X once microphone availability from COVID calms down. But overall I think Elgato has a good product here, especially for streamers with their mixer software. 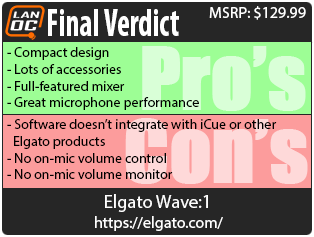 You might call him obsessed or just a hardcore geek. Wes's obsession with gaming hardware and gadgets isn't anything new, he could be found taking things apart even as a child. When not poking around in PC's he can be found playing League of Legends, Awesomenauts, or Civilization 5 or watching a wide variety of TV shows and Movies. A car guy at heart, the same things that draw him into tweaking cars apply when building good looking fast computers. If you are interested in writing for Wes here at LanOC you can reach out to him directly using our contact form.
Discuss this article
Log in to comment
Posts in discussion: Elgato Wave:1