I kind of hinted at it earlier, but Elgato didn’t just drop their two microphones and leave it at that. They have a lot of accessories that you can pair up with either microphone to get your desk setup perfectly. They have an extension for the stock base if you want that to be taller for example, but after having the Yeti X sit in front of my monitor for months that wouldn’t work well with my desk. They also have a pop filter, which I sadly didn’t get in to check out. But they did send over the shock mount which lets you use the Wave microphones with an arm and to isolate it from vibration. Then they have their multi-mounts which aren’t Wave specific, in fact, they have had them for a while now for mounting their key lighting and for cameras. They sent over a multi-mount stand and flex arm kits as well as the shock mount. So before diving into testing I wanted to touch on each of them a little to show what they do.

So the shock mounts box has that same light and dark blue background and they did a great job of showing the mount while also showing a line drawing of the microphone inside of it as well as an arm to show what it does. There is also a picture on the back that shows that as well. Then on the side, they list what is inside. You get the mount which comes wrapped in plastic, a quick start guide, and adapters for different mounting thread sizes. 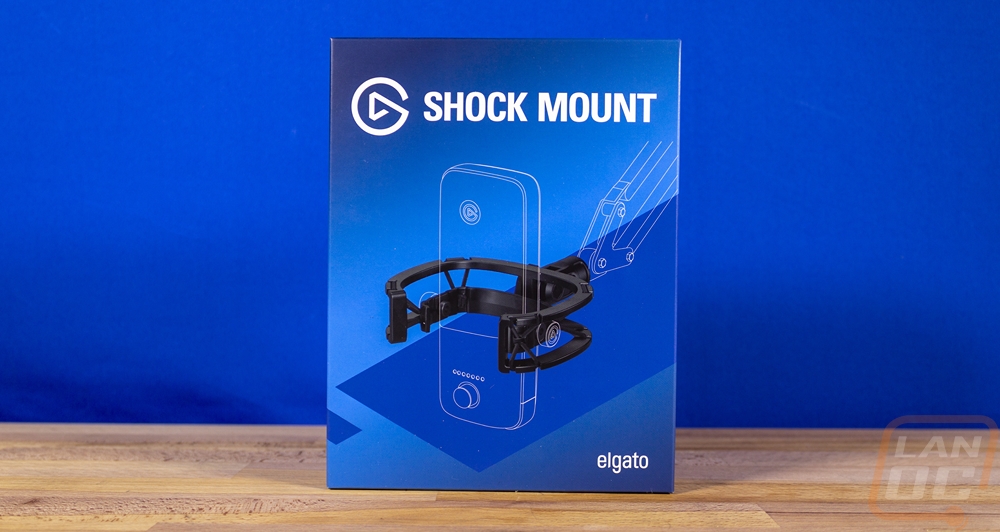 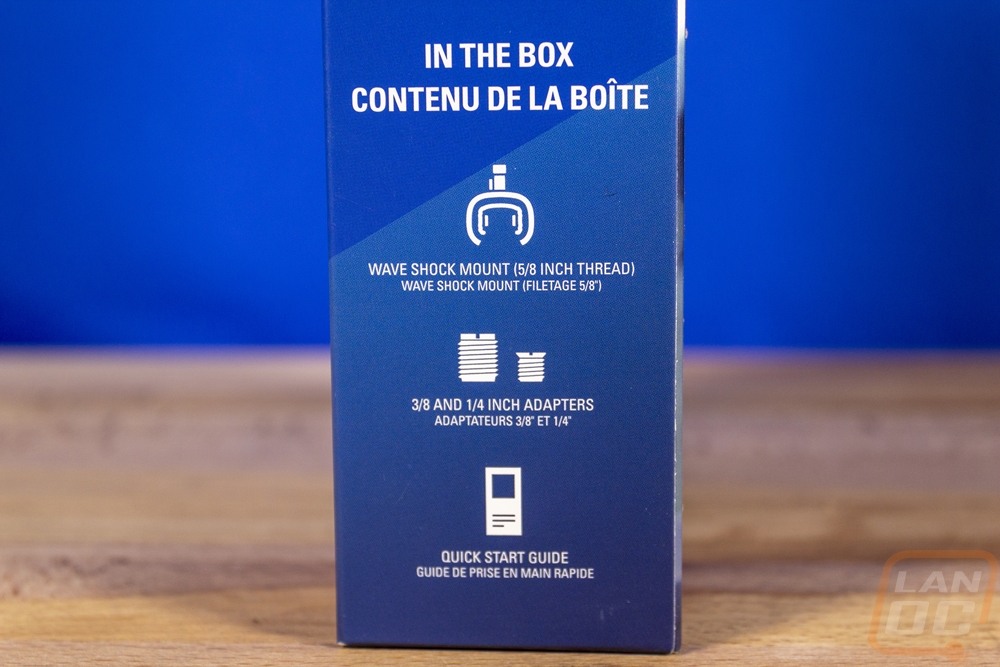 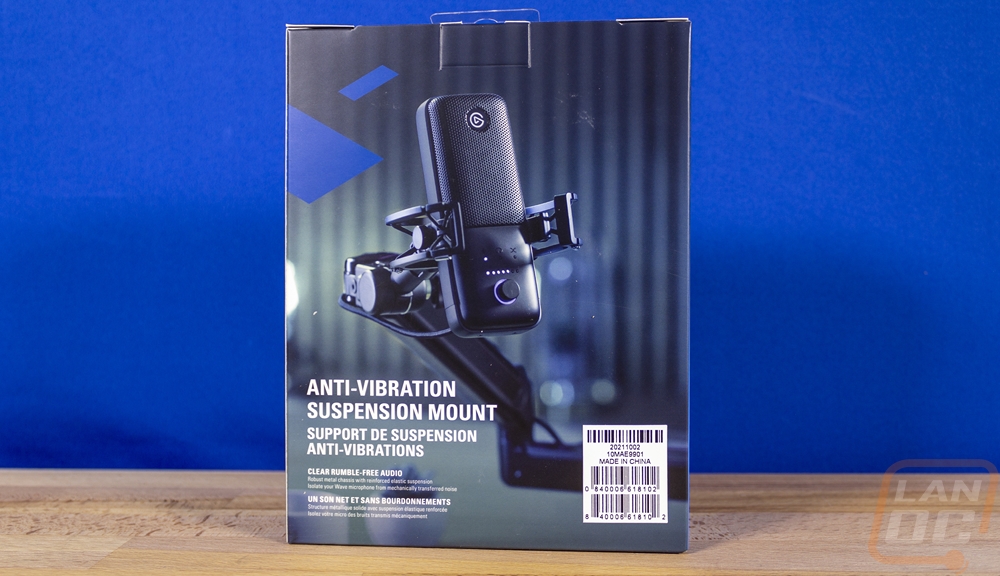 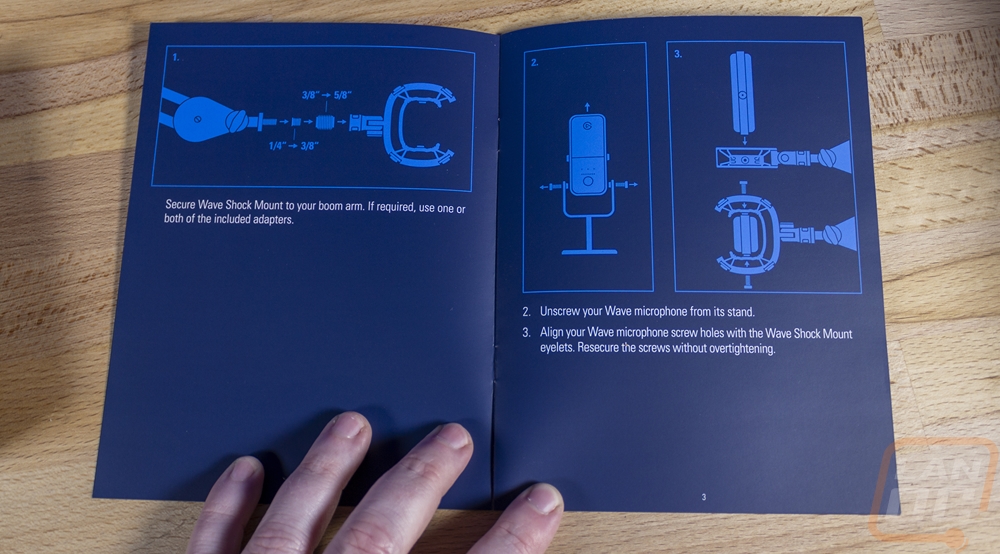 If you haven’t seen one before, basically the mount has two main components that are completely independent of each other. The main ring on the outside ties back into the arm mount. Then on the inside, there is a second smaller ring which is what the microphone mounts to. It uses the same two thumbscrews on the side of the microphone as the stock mount along with rubber grommets on those holes for some isolation. Then they use an elastic string looped between the two halves to hold the microphone inside of the main mount. This isolates the microphone from outside bumps and vibration which is a big issue with desktop microphones. The arm mounting end comes with the smaller adapter preinstalled and this is what the Multi-Mount and the stock mount use so this makes installation that much easier. It also has a pivot built-in with a locking screw depending on if you are mounting to the stock stand or an arm that is coming from the back. 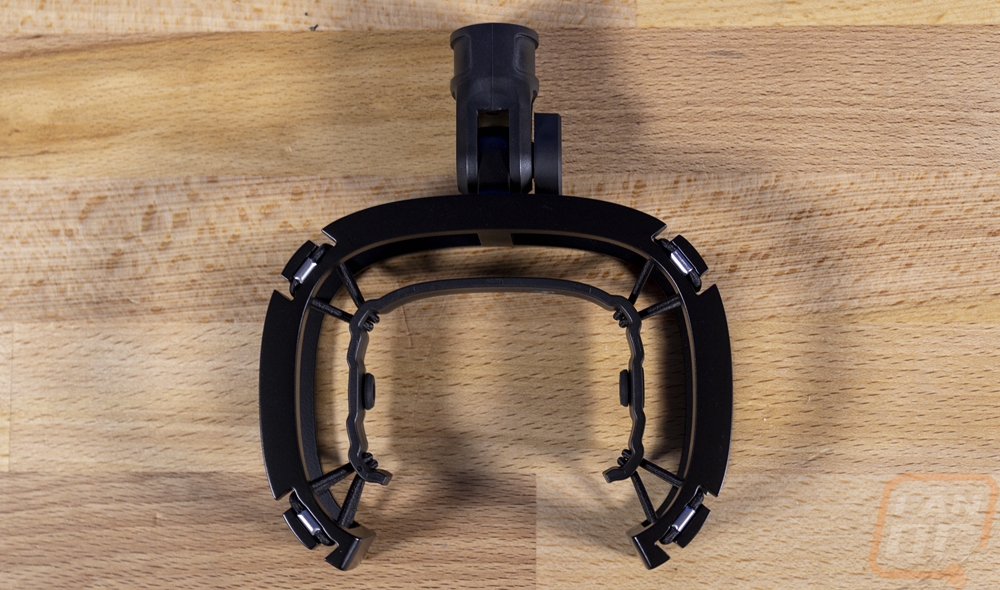 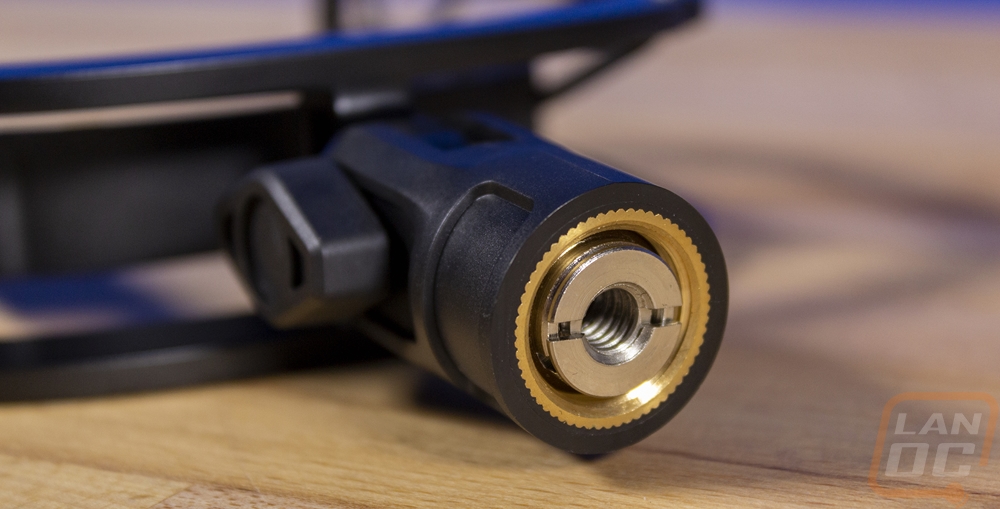 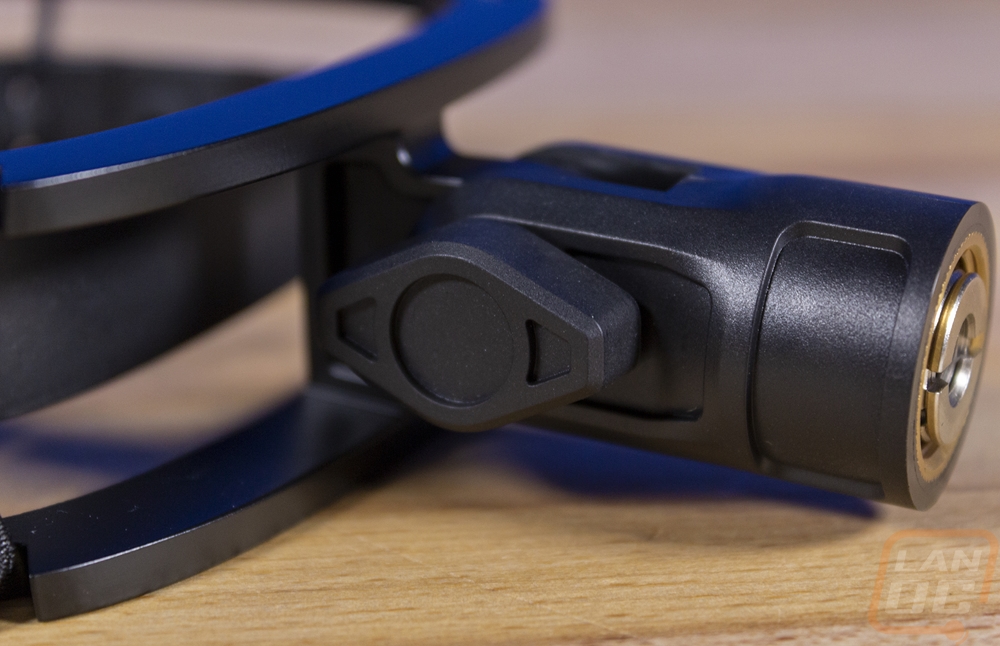 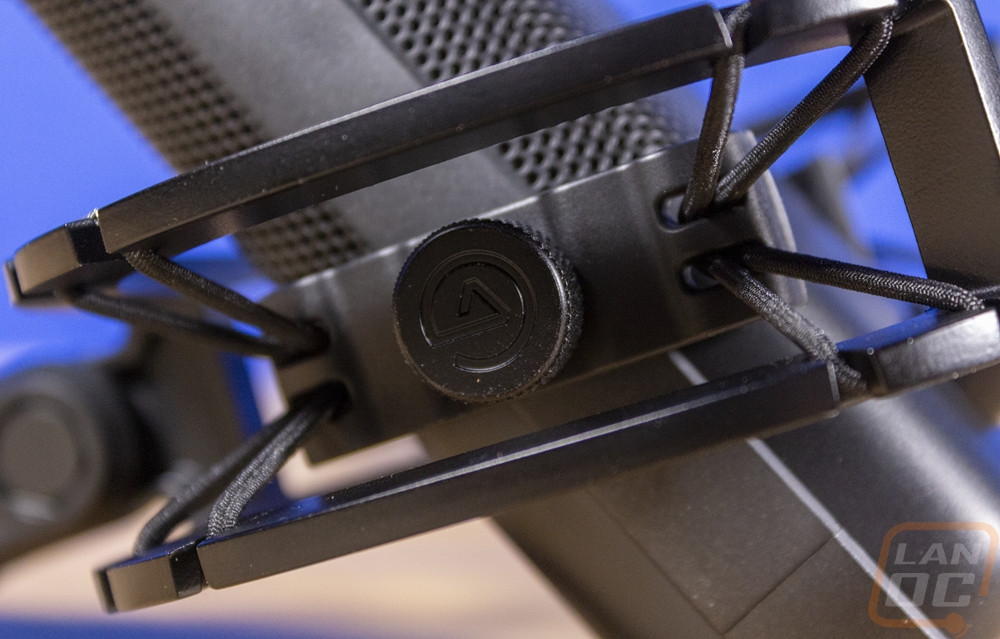 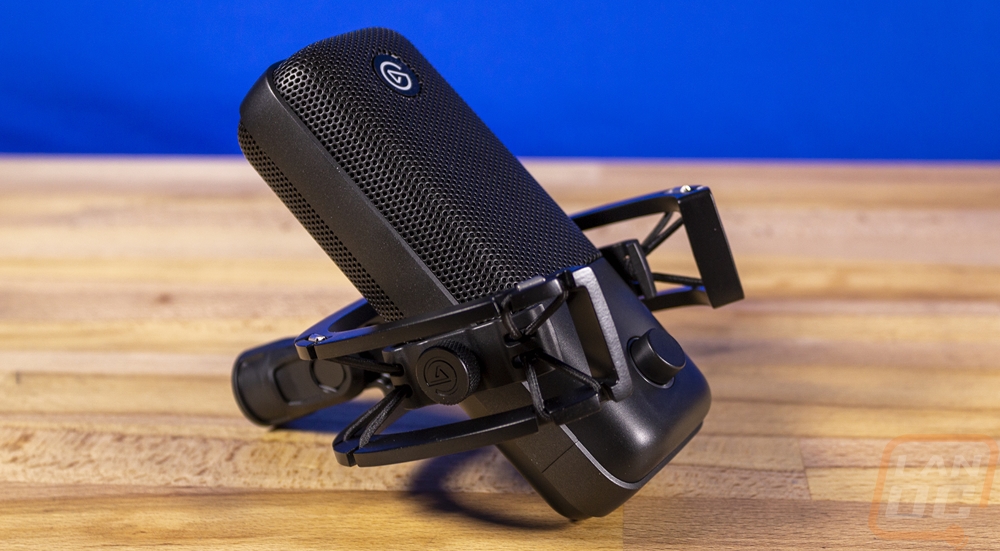 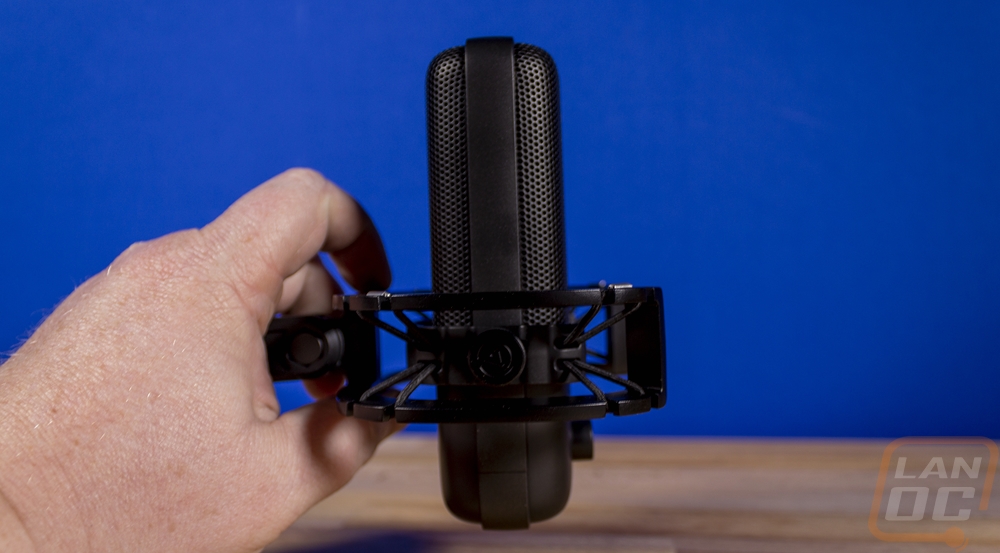 Next up I had the Multi Mount itself which doesn’t get the same blue box treatment as the microphones and shock mount. This is just a brown box with the Elgato logo and the name on the top of the box. Inside formed cardboard holds the stand as well as a folded up instruction paper to get you setup and that’s about it. 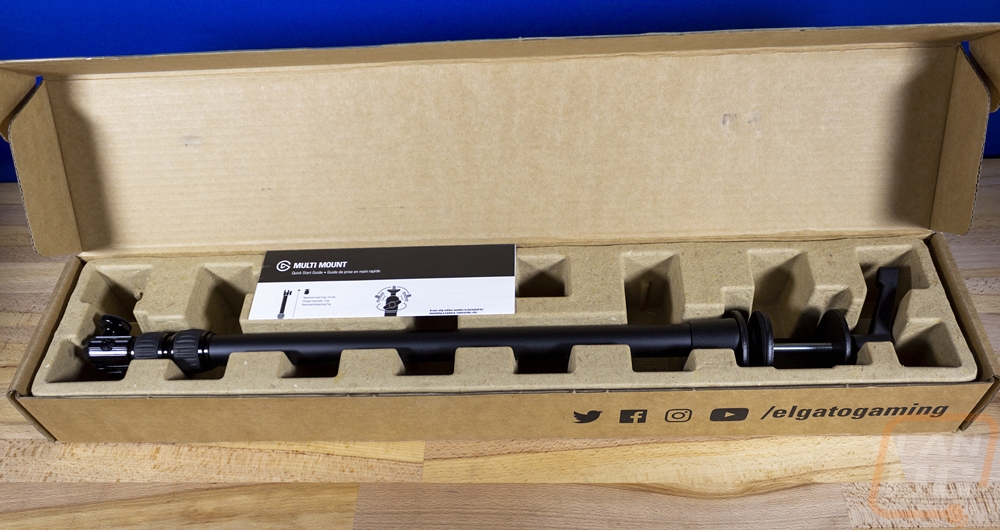 So they have an add on to make this a free standing stand, but it comes default with a cable clamp. The clamp has the only Elgato branding on it which is nice and it is a little nicer than you would find on a cheap stand off Amazon. For one both the inside and outside of the clamp have foam to try to help you protect your table when you tighten it down. Also, the crank itself surprised me. They could have gone with a simple T handle and be done with it. But they used this larger arm. But to avoid an issue with the longer arm if you are tightening this down up against a wall you can pull on the arm and it will move its position. So say you are against a wall you can tighten until you hit the wall, pull and spin it back around. The other benefit of that is when you get it tight you can pull and move the arm as far out of the way as possible. This arm does extend as well and they have two sizes. This is the L model which is 22 inches long at its shortest and 49 inches at full length. The short version is 17 at short and 29 at full length which honestly is the better option when using this for a microphone arm. The extensions have rounded locks with grips to lock the mount at any specific hight and from playing around I can say they do a surprisingly good job of locking in place. At the end of the mount, there is a ball pivot mount that comes with a camera style ¼ inch screw and a rubber grip. There is also a wingnut that lets you loosen and tighten the ball up. 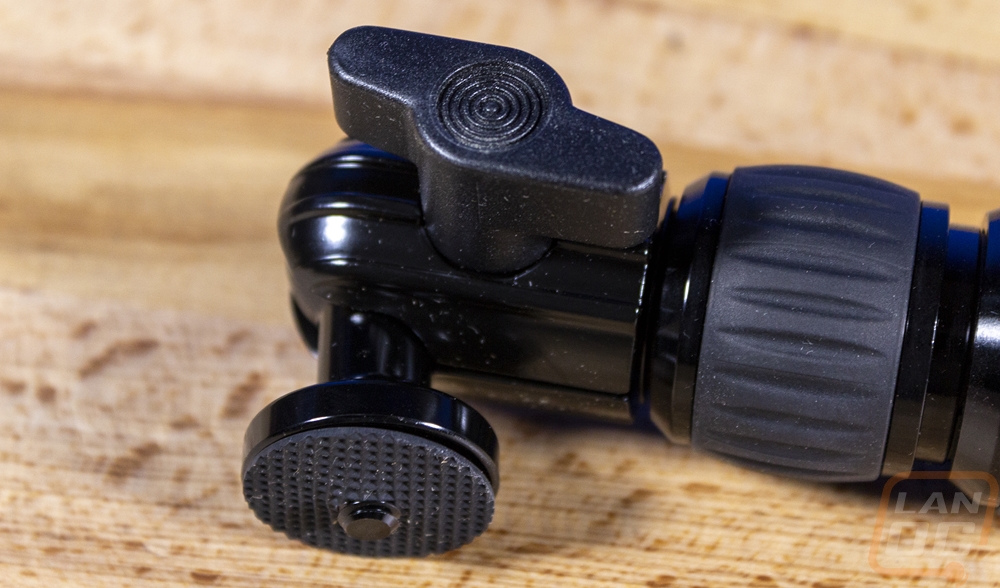 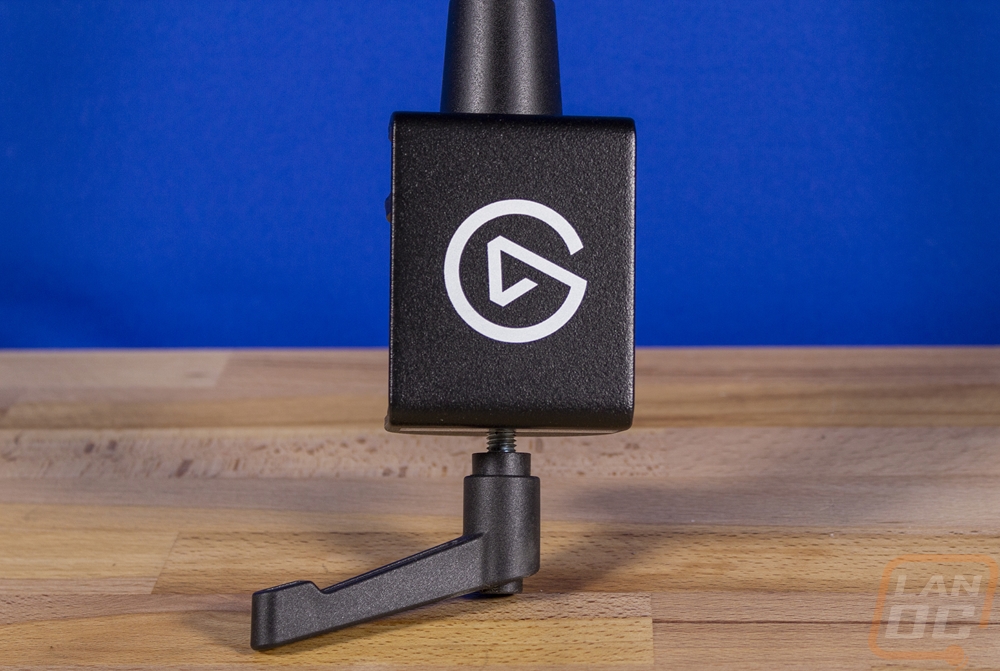 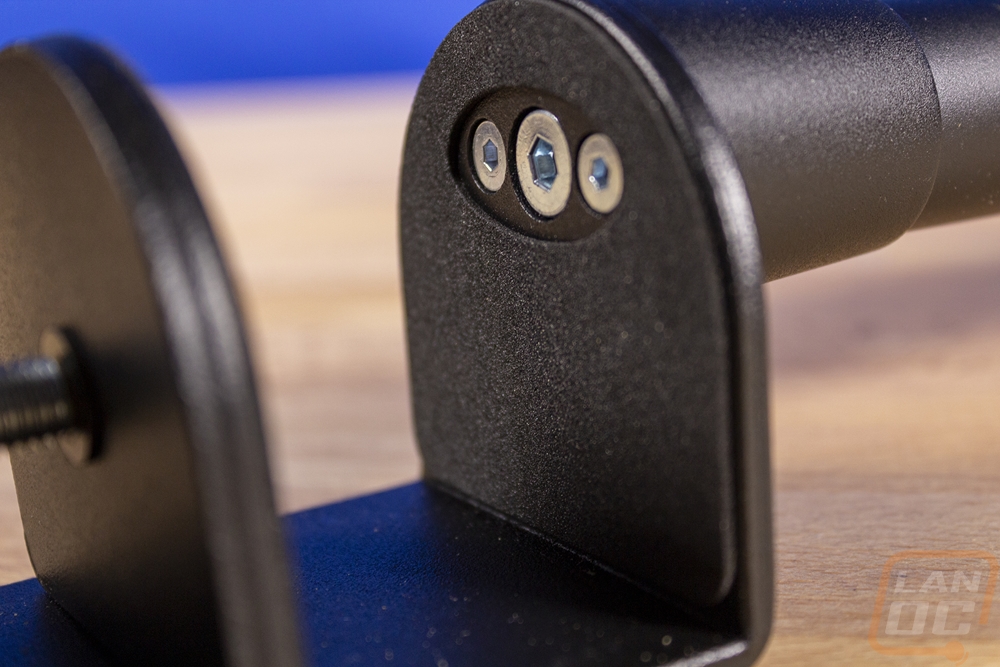 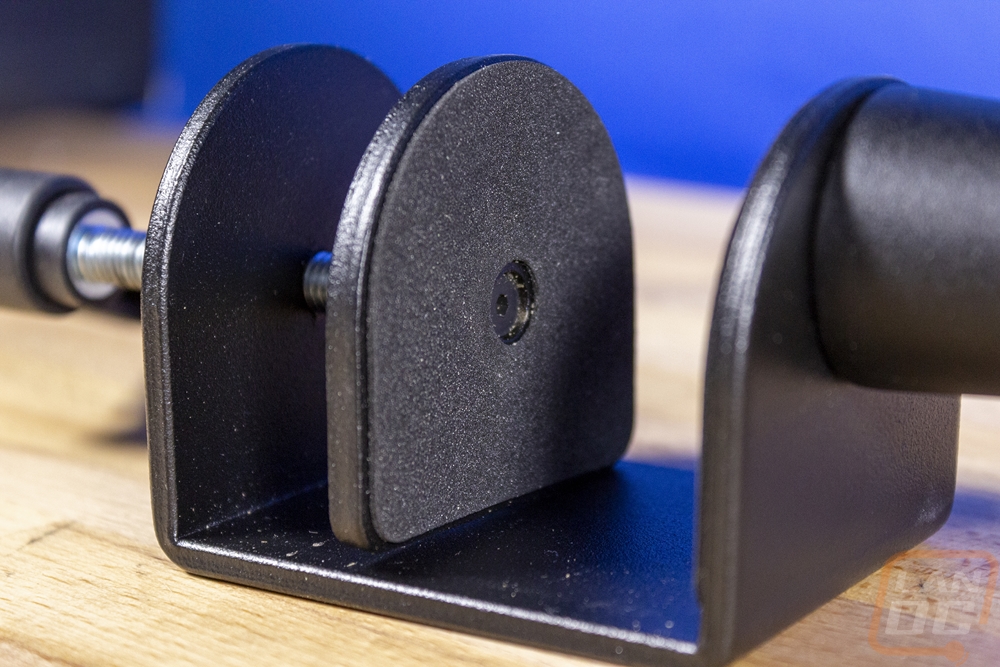 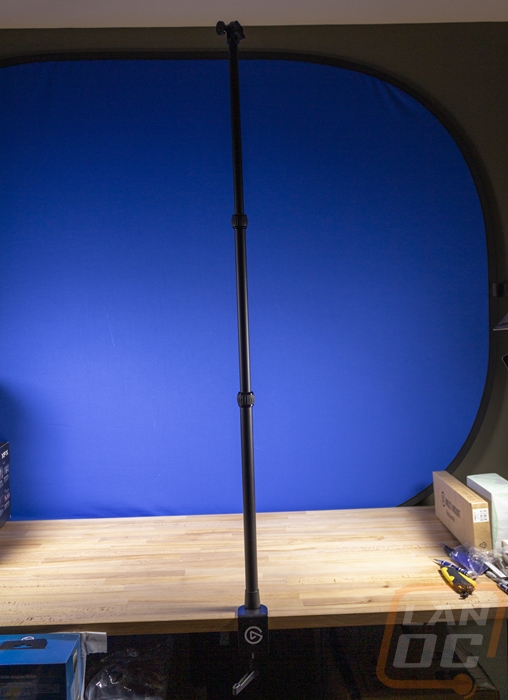 Before getting into the last box I did hook the shock mount up just to see how it would work. This alone could work with a lot of desks, especially if you mount it to the side of your desk. But for mine, I have a 3+1 monitor stand that I need to get up over top of while also coming forward enough so it's not hidden back behind the monitors. 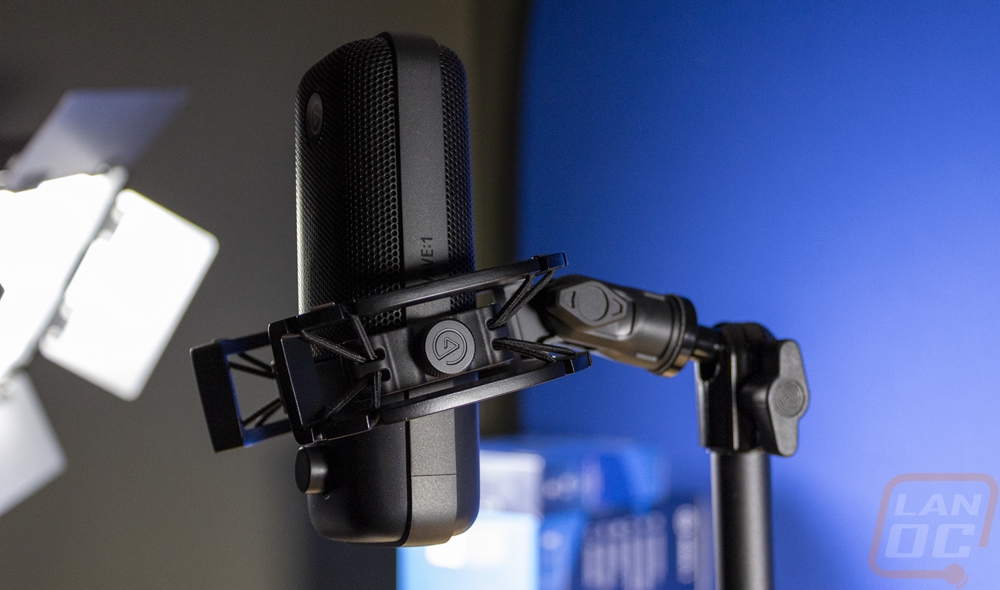 So for bridging that distance you will need a Flex Arm kit which again comes in a small and large size. This is the large kit and it comes with four poles. One is 9.45 inches long, one is 6.7 inches long, then you get two short poles that at 3.15 inches long. They are all steel and come with a ball on one end and the same pivot mount that the main pole comes with on the other. You loosen the wingnut up until you can fit the ball in and add them together to get the job done. The small flex arm kit gets you just the 6.7-inch pole and one 3.15 inch pole. Which again, for a microphone arm or even if you were using this to mount a key light or camera at your desk would most likely work. 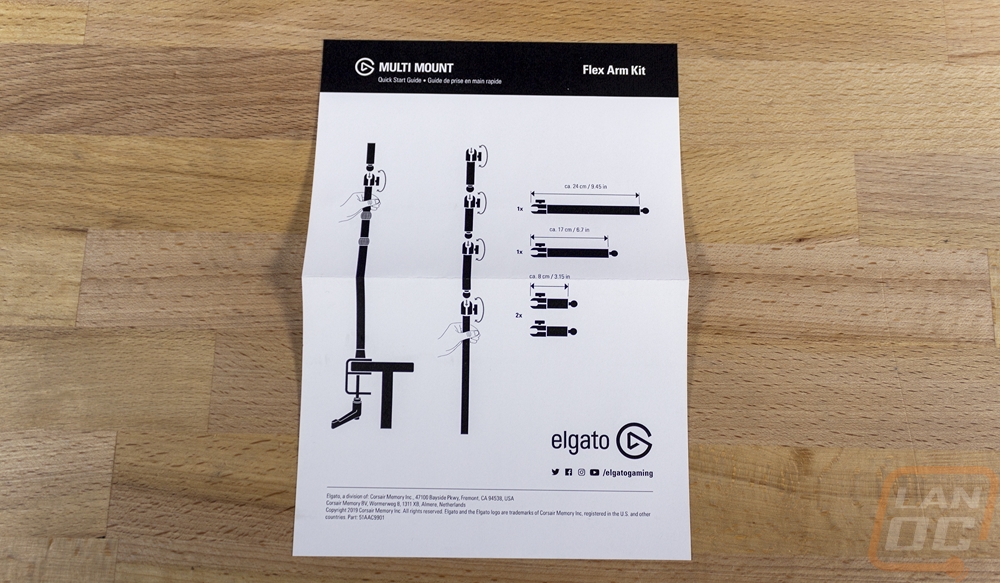 Before moving to my desk for testing, I did play around with the arm using ALL of the flex arms and I was really surprised at how well things could hold. I didn’t have to crank things down at all for them to grip and not move. This is because each of the pivot balls have a stair-step effect machined into them to help lock them in place. Even still I expected with multiple arms pulling at least one would move. This isn’t like a traditional microphone arm though that is spring loaded and you can move around freely. These lock in place and don’t move. Elgato also has a few other arm accessories like a solid arm that you can attach anywhere to add a second or third device. You could get wild and have your camera attached as well as a key light or even your phone using their phone mount. 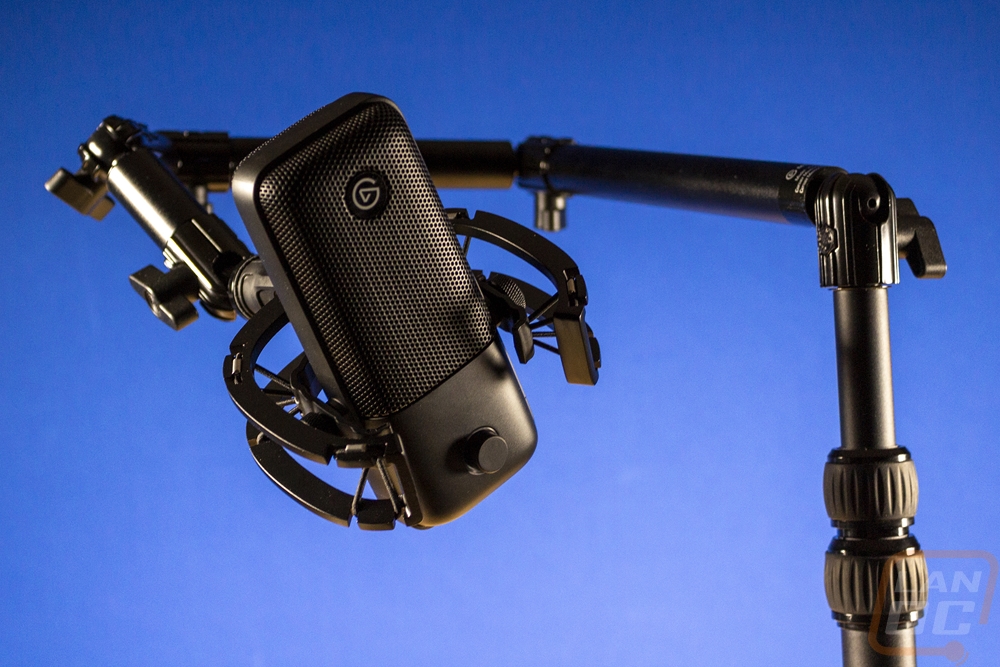 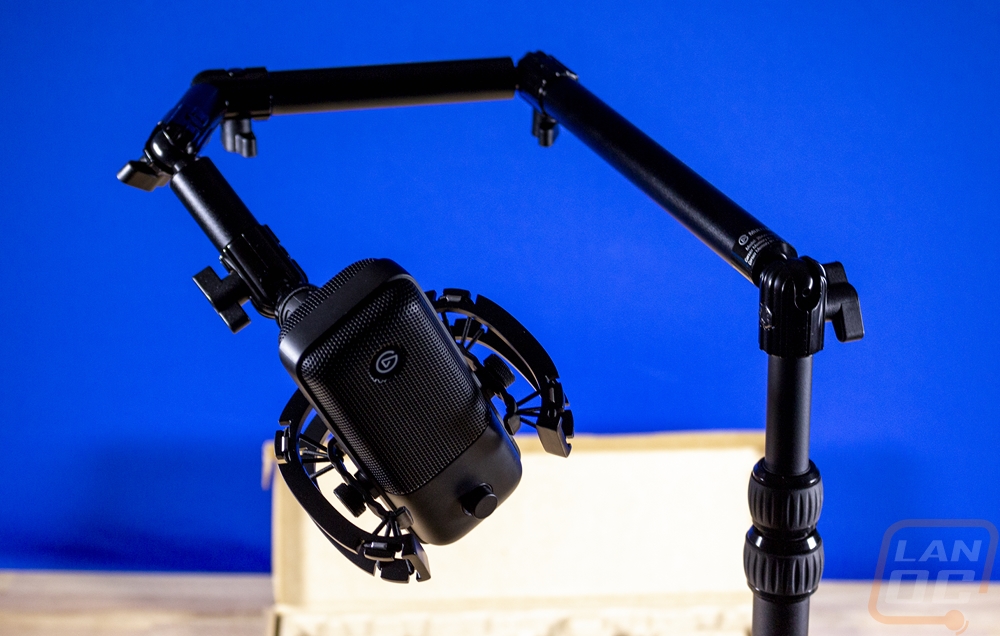