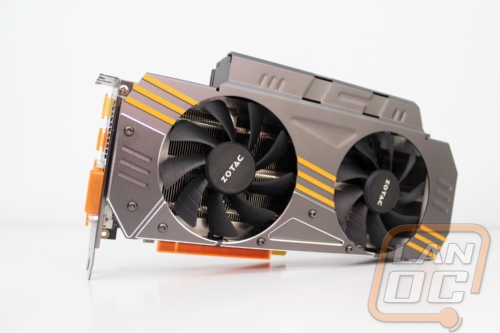 Right out of the hole I can say without a doubt that the GTX 970 AMP! Omega is one of the largest and heaviest cards that I have ever seen. It is a monster! The card is about three slots wide at the cooler but the PCI slots are only two wide. While the width doesn’t help, the reason this is such a heavy card is because the entire fan shroud is metal and at the top of the card there is a thick heatsink as well. This makes the GTX 970 AMP! Omega a tall card as well as being thick. The all metal fan shroud looks great, Zotac went with a light grey color for most of it with light orange accents in three strips across the side. The bottom left corner of the shroud also has additional machined panels bolted to it as well. 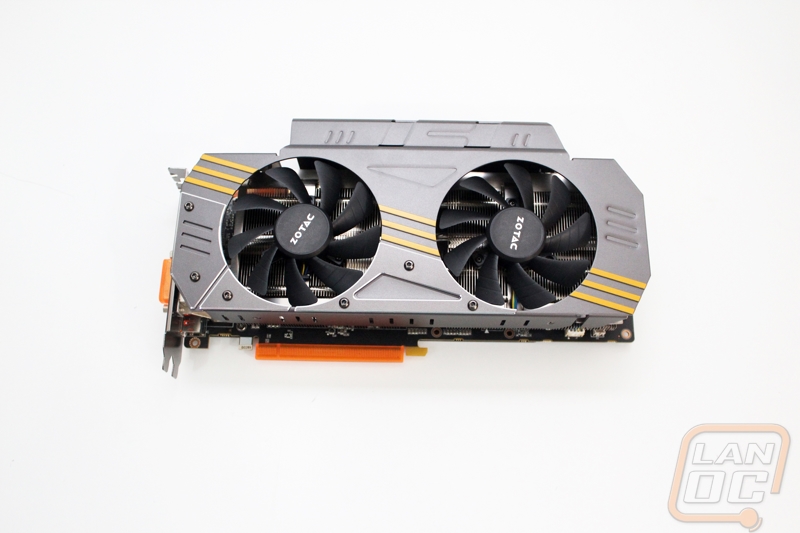 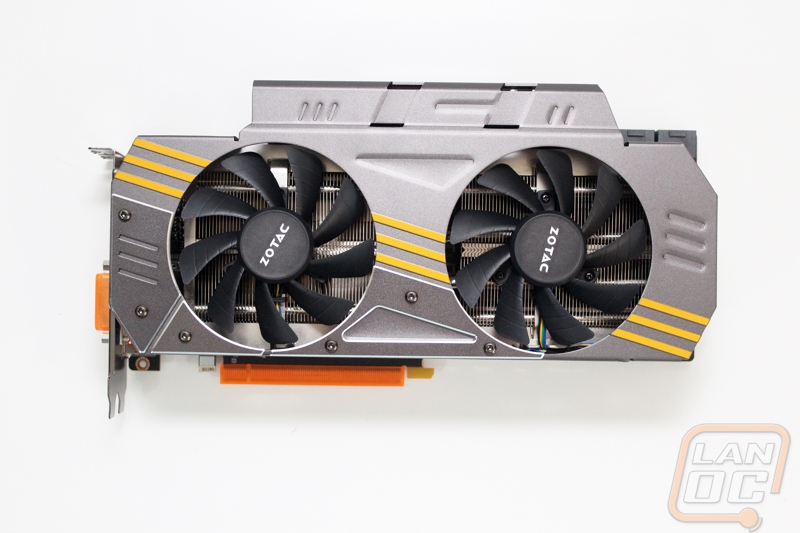 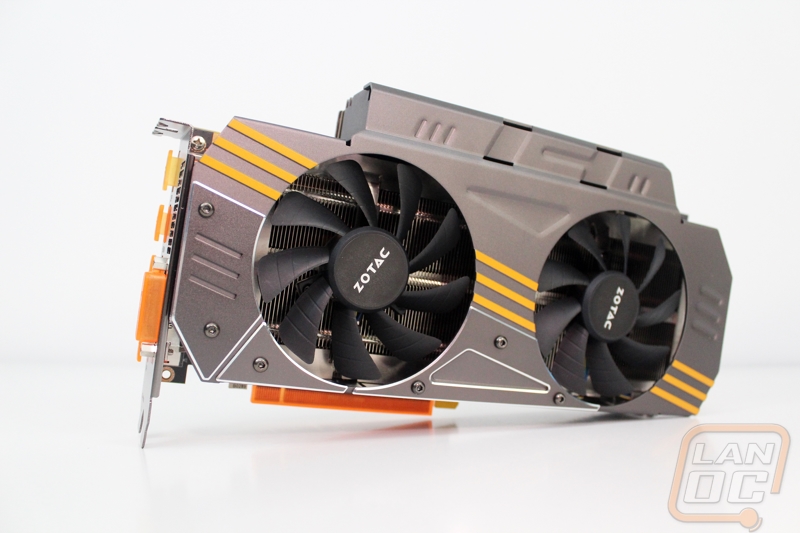 The thick cooling design does leave room for a huge heatsink under the fan shroud. Zotac uses the cards two fans to blow down over the two halves of the heatsink and out the bottom and end of the card. They pull heat from the GPU out over the heatsinks using four long heatpipes that run from one heatink, across the GPU, and out over the second heatsink. The design does leave a nice sized gap between the heatsink and the PCB to get good airflow across the PCB to keep everything else cool as well. Blocking the top of the card does limit the air to exiting the end and bottom of the card as well as a tiny bit through the vent on the PCI expansion slots. 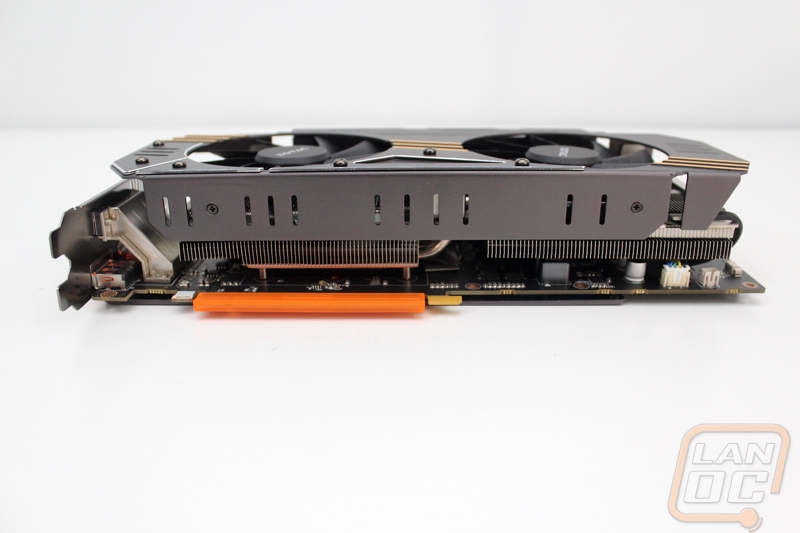 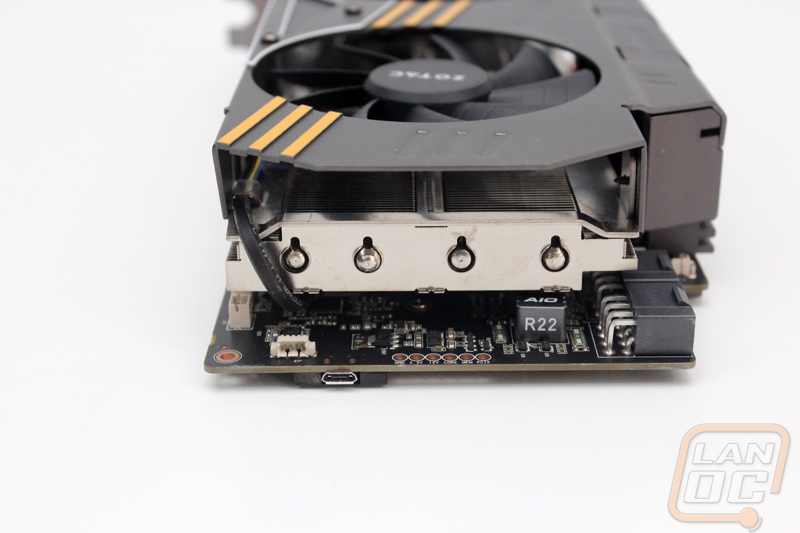 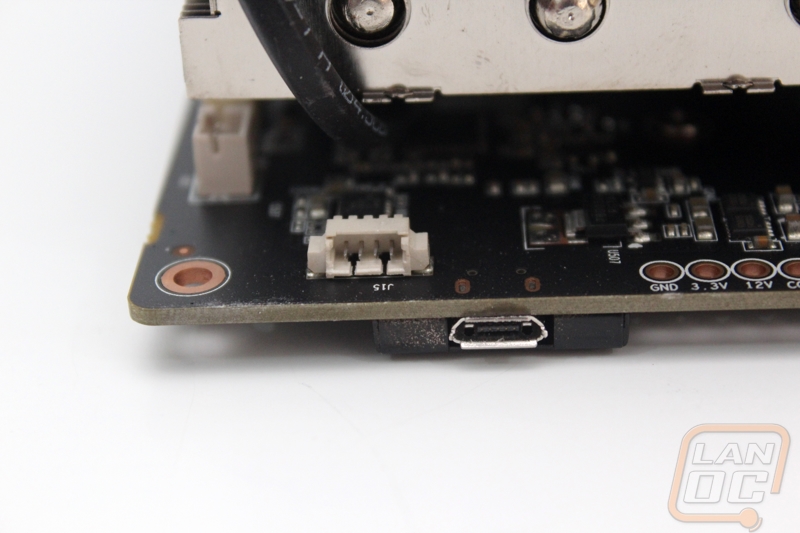 Where the PCB is taller on the top of the GTX 970 AMP! Omega Zotac uses an inch thick machined aluminum heatsink. It attaches to the fan shroud and also bolts through the PCB to the backplate as well. 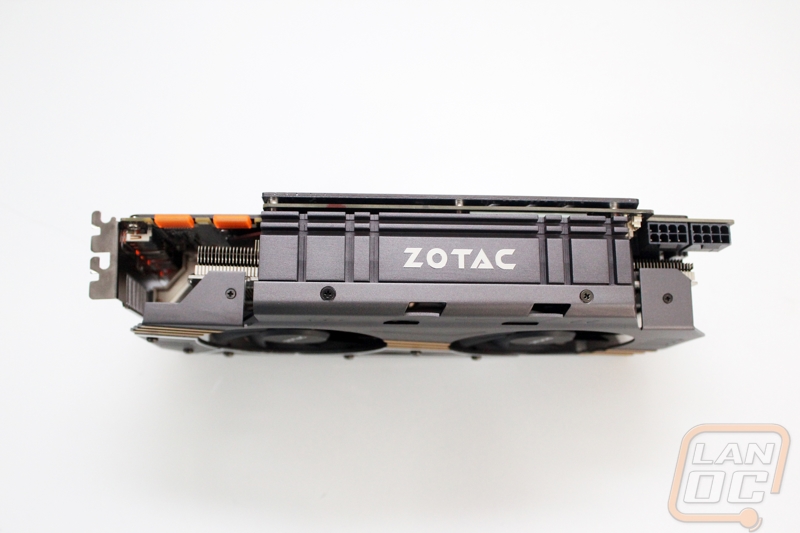 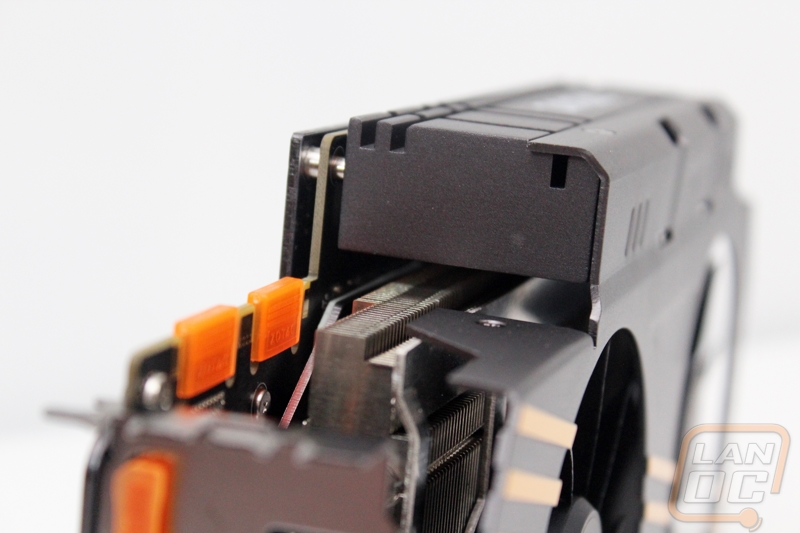 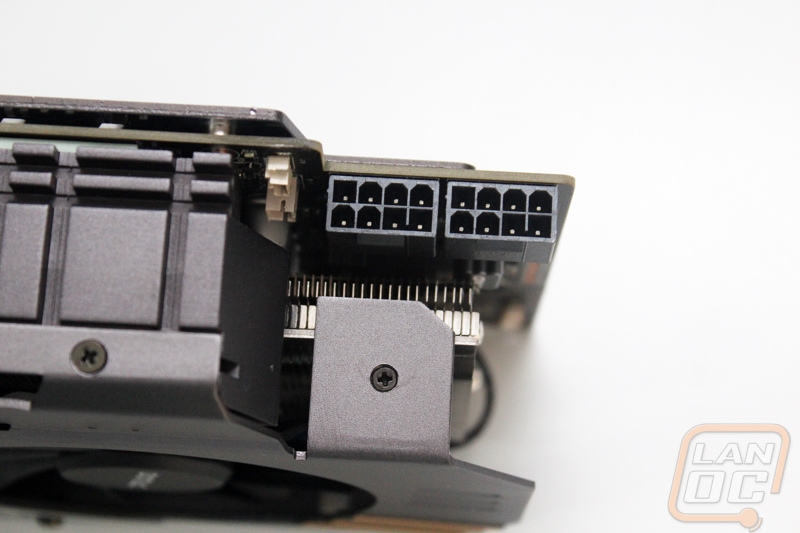 The GTX 970 has two SLI bridge connections meaning you can run up to triple SLI with them. 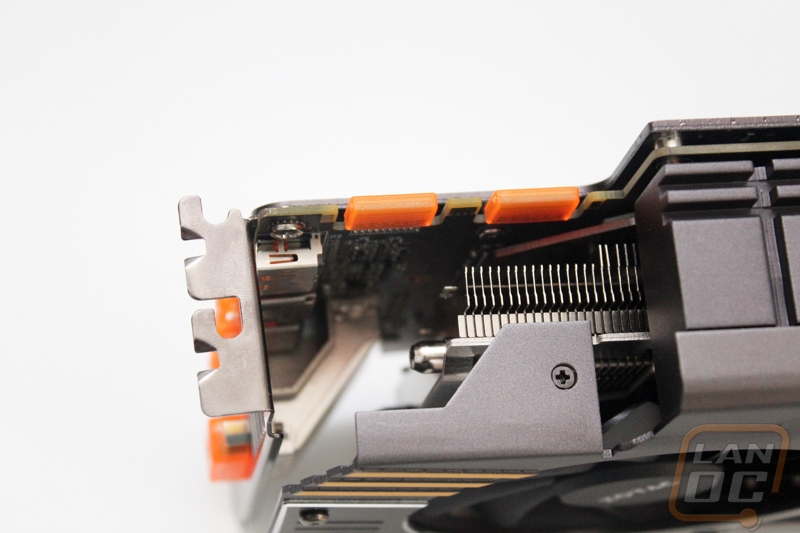 For display connections the GTX 970 AMP! Omega has a similar layout to the GTX 980 and GTX 960s that I have previously reviewed. You get one DVI connection as well as three DisplayPorts and one full sized HDMI. I would personally prefer to see two DVI’s still, it is still great to see manufactures adding more connection options. Hopefully this will mean more DisplayPort monitors in the future as well. 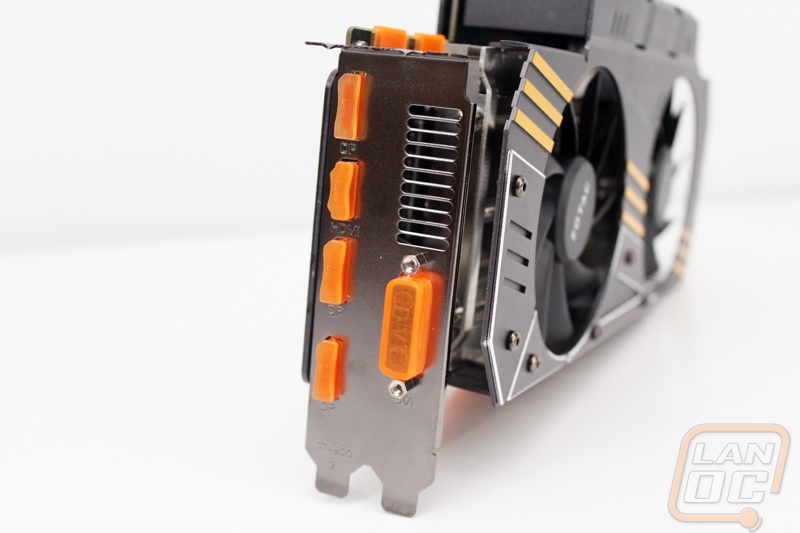 The back of the AMP! Omega is mostly covered with a backplate. Zotac went with the same light grey as the fan shroud. The backplate has openings on the back of the GPU, around the OC+ interface, and around the power boost circuitry. For airflow the rest of the backplate has vents machined into it to keep things cool as well. This rear view is a great way to see just how tall the card is as well. The SLI fan bridges are at a standard height but in the middle the card is over an inch taller than reference. 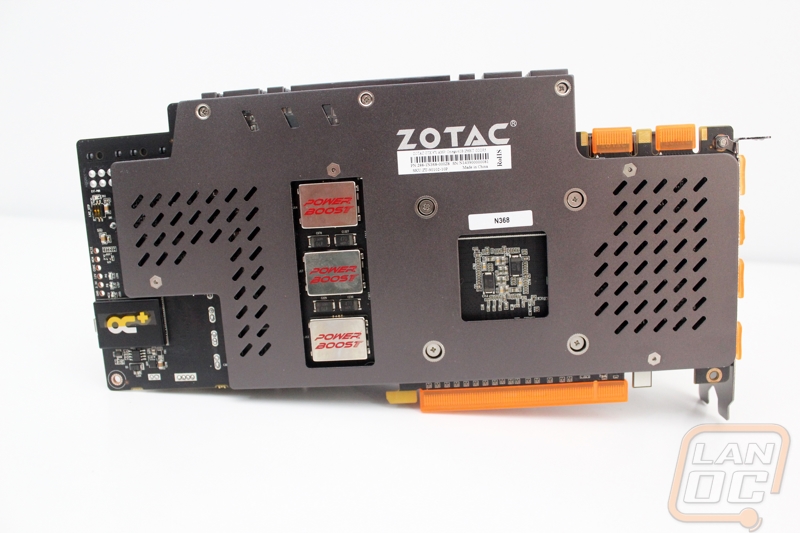 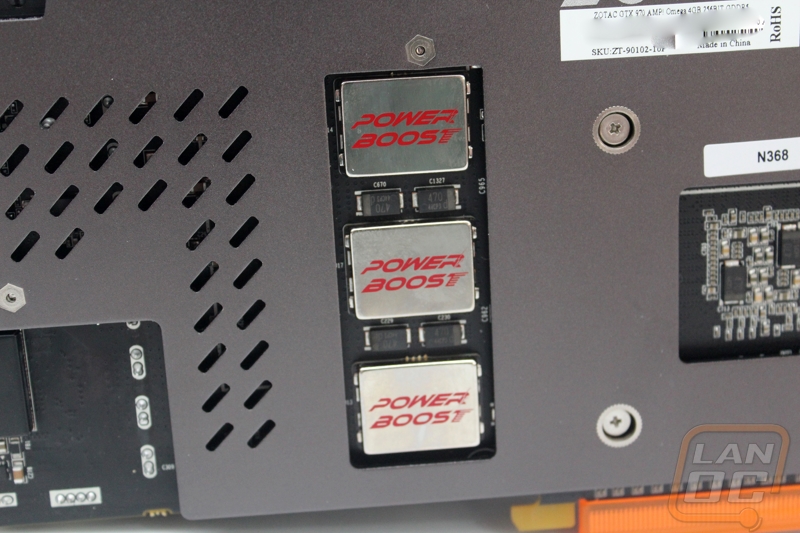 One of the most unique parts to the AMP! Omega is the OC+ interface on the end of the PCB. This uses a micro USB plug that plugs into one of your internal USB headers. This interface works with Zotacs software to allow you to tune and tweak the power settings even more than normal. 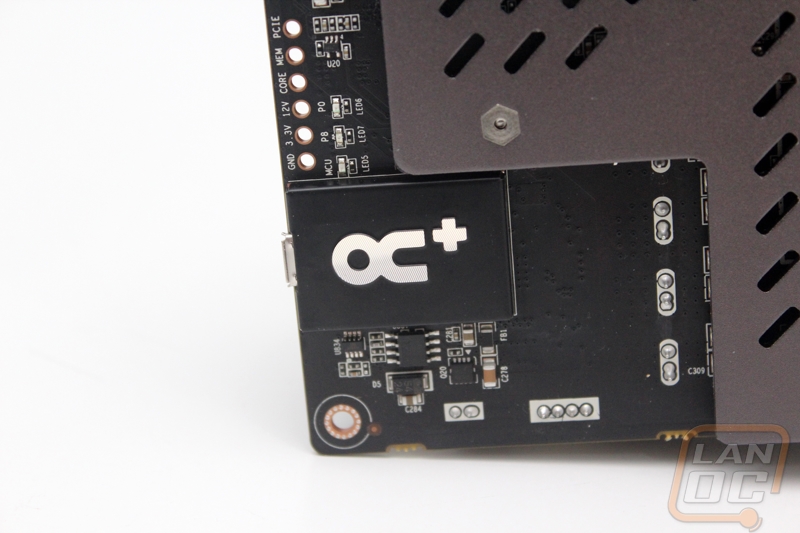 We have 1359 guests and no members online