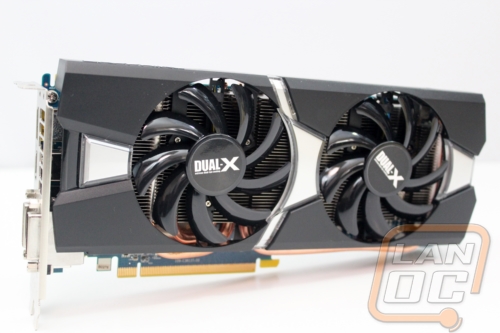 With this being the first R9 280 that we have had the pleasure to take a look at. I am happy to finally confirm that you don’t have to go all out with an R9 280X or higher to enjoy the best of todays games. The Dual-X R9 280 OC plowed through our in game testing with great results making it a great choice for someone who is still on a limited budget and is gaming at 1080p. I wasn’t sure how well Sapphire’s cooling design would work with just the two fans compared to their Tri-X coolers but the lowered heat output of the 280 over the 280X helped keep this card running even cooler than the powerful 280X Toxic that I tested earlier this year.

One of the only complaints I had about the Dual-X R9 280 OC was with its rather bland styling. With its black and grey color scheme it isn’t as flashy as the other Sapphire cards from this generation. To some that will be a perk, because the orange or purple heatsinks might not go with every build, the grey will fit in much better. But with the inclusion of the bright blue PCB this card will still most likely look a little less stylish in most builds. Of course its performance makes up for that.

So we know how it performs but where does it land in the market price wise? Well this this is a little tricky. With AMD cards being nearly impossible to come by for the past six months their prizes have been all over the place. The reference MSRP of the R9 280 is $279 at launch and the R9 280X is $299. While the prices have been coming back down, the 280X is still a little more expensive, so the $299 that this card is selling for right now on Newegg isn’t a bad deal. But if 280X’s come back down to their MSRP soon, this card will be overpriced. Even if they sold it at the reference card MSRP of $279, I would rather throw down the $30 for the considerable jump in performance. The pricing right now is in no way Sapphires fault though, hopefully the market levels out and more people can start enjoying well priced cards for their gaming rigs! 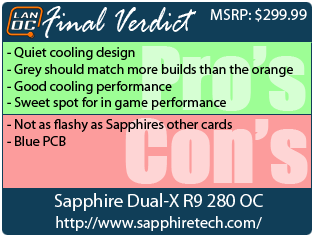 You might call him obsessed or just a hardcore geek. Wes's obsession with gaming hardware and gadgets isn't anything new, he could be found taking things apart even as a child. When not poking around in PC's he can be found playing League of Legends, Awesomenauts, or Civilization 5 or watching a wide variety of TV shows and Movies. A car guy at heart, the same things that draw him into tweaking cars apply when building good looking fast computers. If you are interested in writing for Wes here at LanOC you can reach out to him directly using our contact form.
Discuss this article
Log in to comment
Posts in discussion: Sapphire Dual-X R9 280 OC

We have 1292 guests and one member online