The biggest feature of the Gigabyte GTX 760 OC Windforce is of course the Windforce cooling that is in its name. This is a cooling design that Gigabyte uses on a lot of their cards that literally packs as many fans on the card as possible. Along with that there is a large heatsink that goes from end to end that gives the fans lots of surface area to blow over to keep the card cool. That heatsink starts with heatpipes running from the GPU itself pulling the heat out to help with the cooling. All of the fans blow down onto the PCB meaning the rest of the card will also get cooling as well, similar to how a down facing heatsink will also cool ram in a PC. 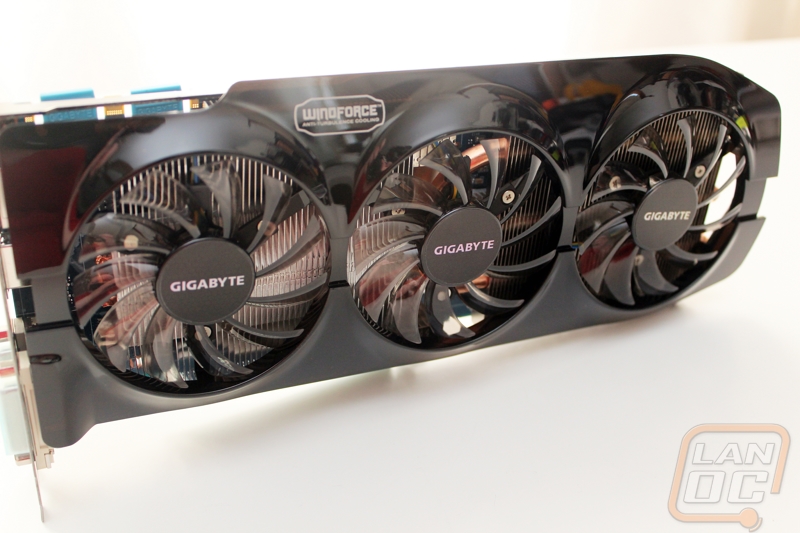 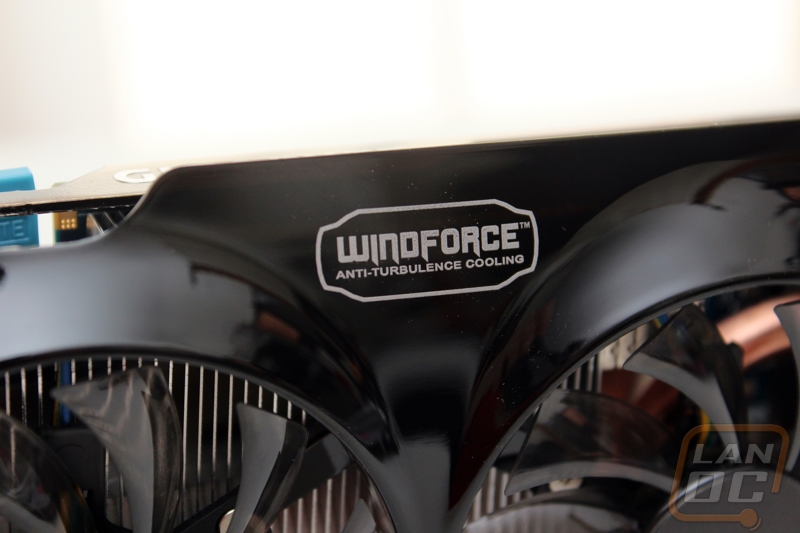 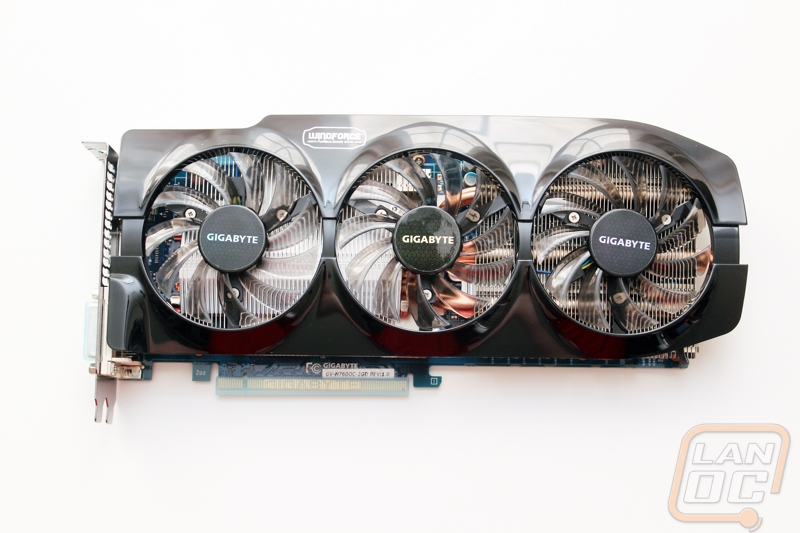 The same design that gives the Gigabyte GTX 760 OC Windforce so much cooling also means the heatsink can’t fit inside of a proper fan shroud to push the warmed air out the back of the case nor would it work with all of the air flow the triple fans provide. Because of that the card is open on all sides to push warmed air inside of your case. This isn’t a problem at all in most cases but if your computer is already running warm, putting even more warm air into it is only going to heat everything up more. 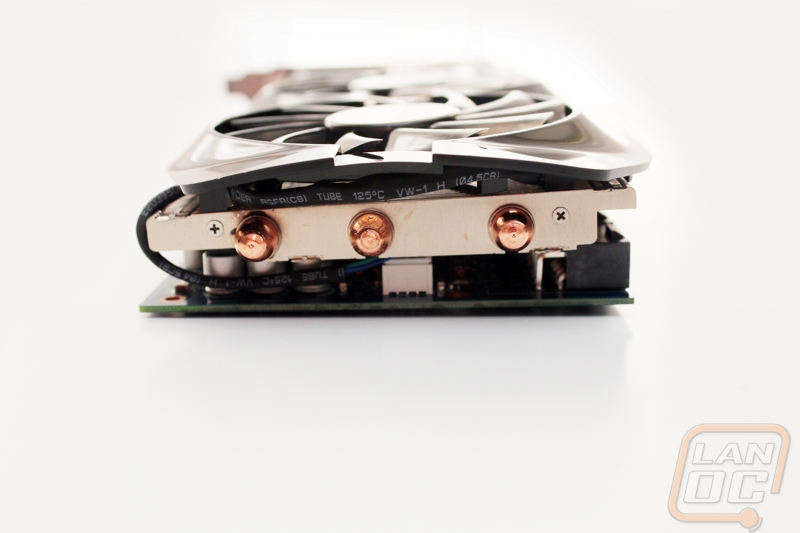 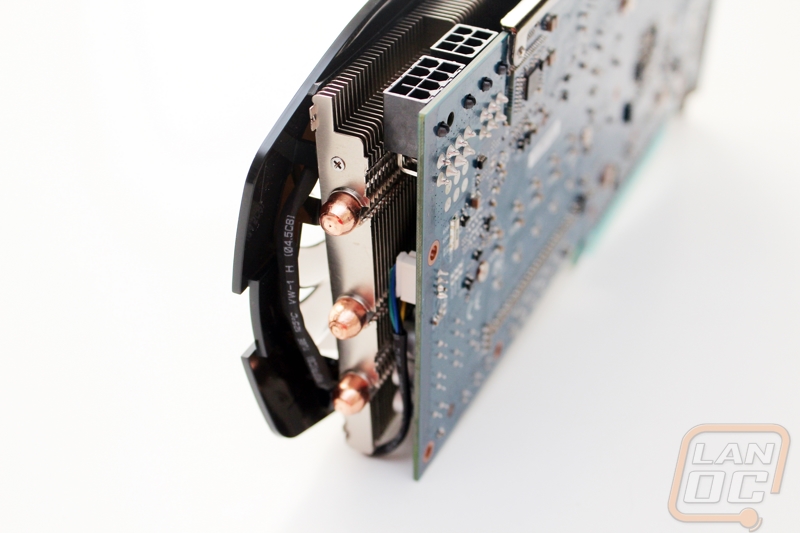 To keep the large heatsink secure and to prevent any sagging of the cooling and the PCB Gigabyte used a long metal bracket along the top of the card. It blends into the design and looks good as well as being functional. Being the only thing you will really see when the card is installed they also included a Gigabyte logo on it as well. I would have loved to see this bracket also have the cards model name on it as well or maybe the Windforce logo. 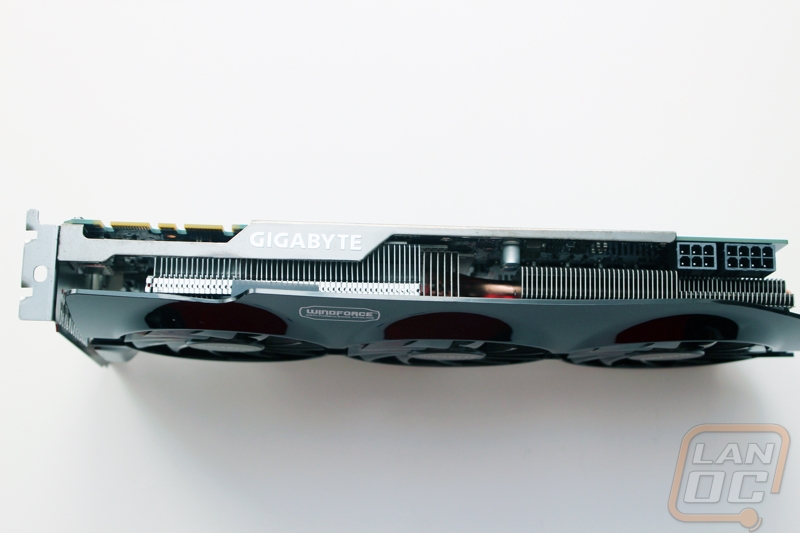 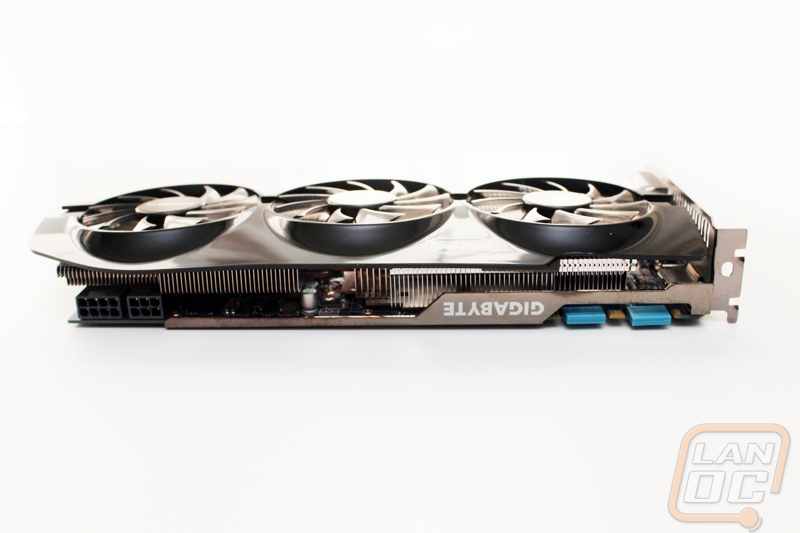 Really the only thing about the Gigabyte GTX 760 OC Windforce that matches with the reference card is the PCI slot cover. We have the same DisplayPort and HDMI ports as well as the two DVI connections. The venting on the slot cover is the same as well although this card is less likely to push air out the back due to its design as I mentioned before. 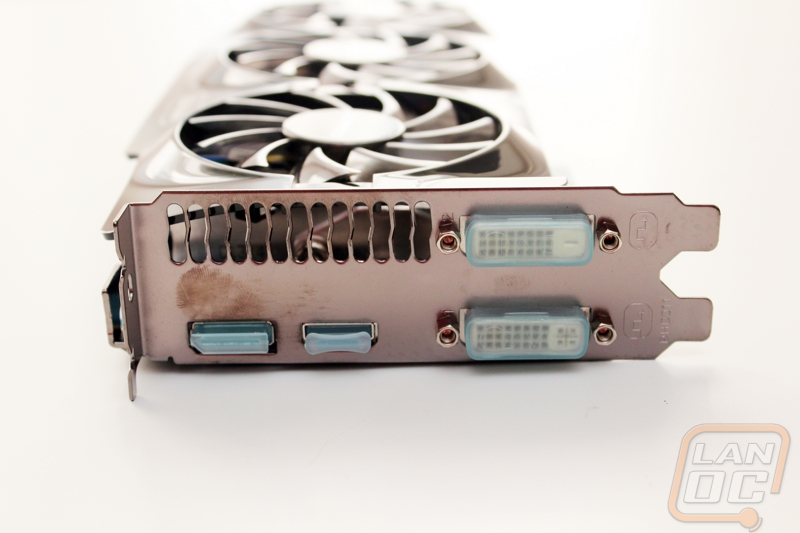 Just like the other GTX 760’s the Gigabyte GTX 760 OC Windforce does have two SLI bridge connections making it capable of running in triple SLI if you decide to now or in the future. 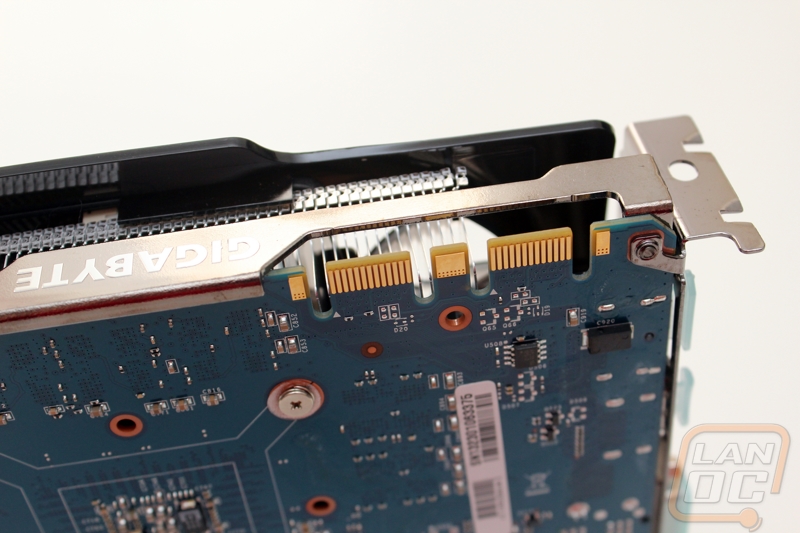 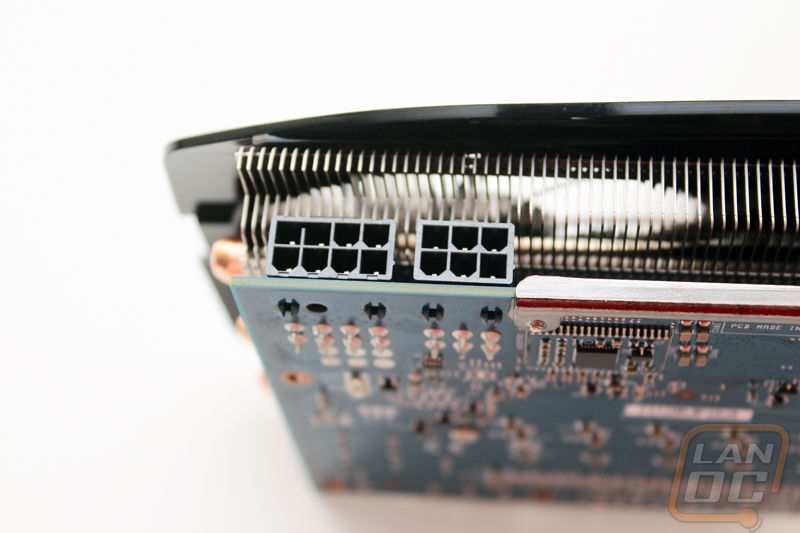 Around on the back side of things we have a bright blue PCB. This is fairly standard for Gigabyte as this is their color, but I would still prefer to see this be a nice black finish. Having said that, it is obvious that the PCB of the Gigabyte GTX 760 OC Windforce is considerably larger than the reference card when you put them next to each other. The half-length PCB design of the reference card wasn’t used on the Gigabyte GTX 760 OC Windforce, they went with a longer design. What is interesting is this design is completely unique, there isn’t a large empty area in the added space like we have seen on a lot of the cards like this. Gigabyte completely relayed out the PCB design. 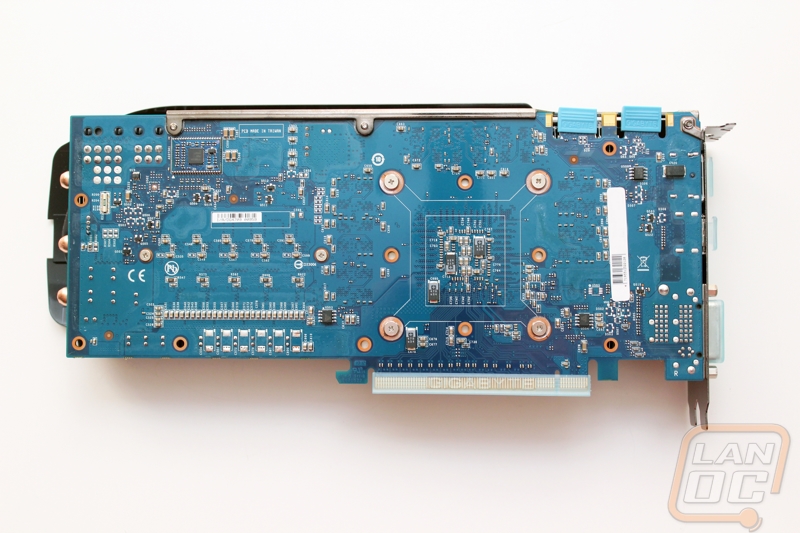 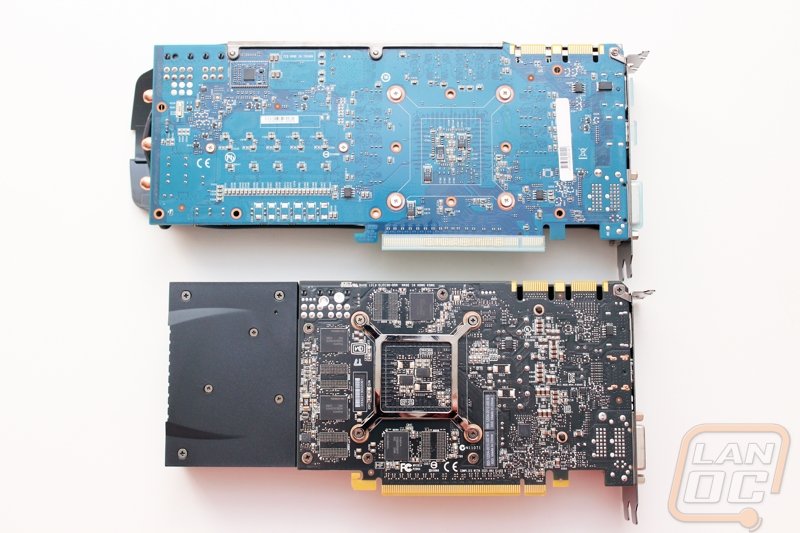 When you put all three of the GTX 760’s together you can finally really see all of the differences. For one you can see the length difference between the Gigabyte GTX 760 OC Windforce’s length and the other two cards. It takes a little more room to be able to pack three fans onto the card. You can also see that the finish is glossy while the other cards have a matt finish that is a little less flashy. 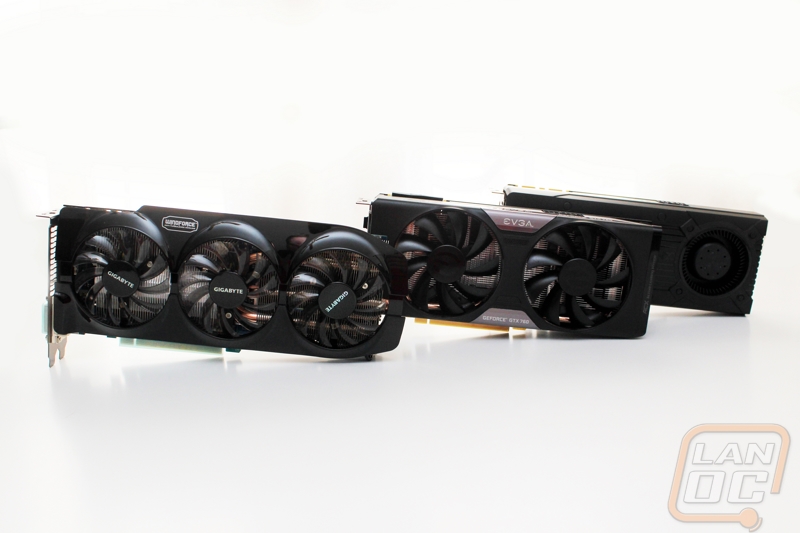 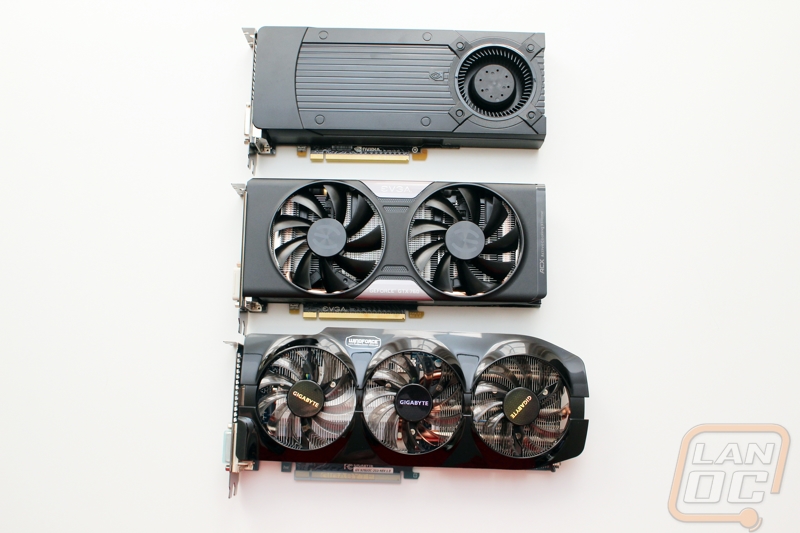 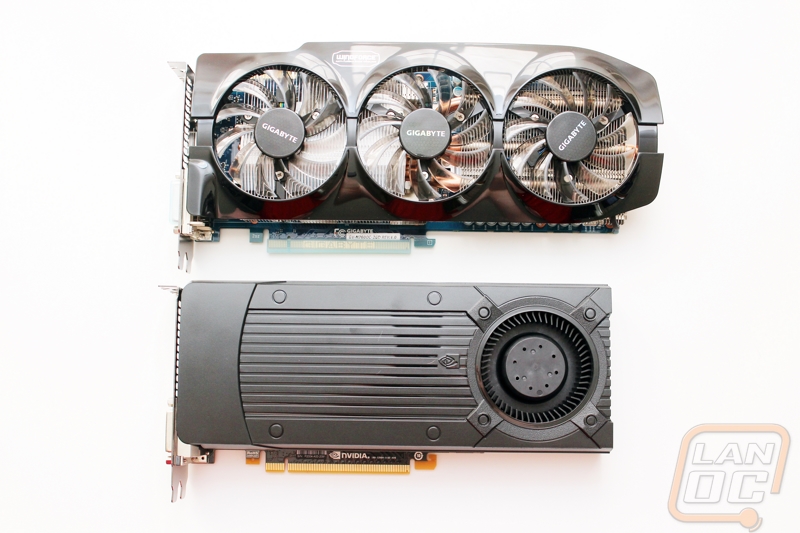 Yeah I agree, I mentioned the same thing in the review. But I mention it because some people like to turn up their fan speed manually, and if they do they its going to be noisier than the other GTX 760's tested.
Read More...

We have 1230 guests and no members online