AMD’s 7970 launch was very exciting but when it came to the lower priced HD 7700 series cards the reception was lackluster, mostly because of pricing issues. We still haven’t found the card that falls right into the sweet spot for performance vs. value while still being able to play anything you throw at it. These cards are rare, like the 8800 GTS G92 edition or the HD 6950 with the ability to reflash to unlock more performance. With the HD 7900 series cards being pricy and HD 7700’s series cards not having the power behind them. I am really hopping the HD 7800 series cards step up to the plate. Today we finally have the chance to take a look at an HD 7800 series card, the XFX R7870 Black Edition Overclocked. With XFX’s amazing cooler and overclock I’m hoping this will be the one.

The R7870 is packaged extremely similar to the 7900 and 7700 series cards we've reviewed recently. The theme of the box lends itself well to the black edition cards, and though you will find a few identifiers of what this card is equipped with on the front side (such as the large 2GH bandwidth and PCI-E 3.0 support), the majority of information is printed on the reverse.  You'll find very much the same information from card to card here, the same tag from the front wraps to the back to further define the features of the GPU. Neighboring this is the thoughtful graphic representation of the outputs the card is equipped with.

Opening the card will greet you with several awards obtained by XFX, including Editor's and Top Honor awards from yours truly. A separate box slides out from the sleeve and opens to reveal the same collection of goodies we've seen from XFX in previous models: Do Not Disturb door hanger with your unique serial number and support information listed, case badge, Crossfire Bridge, install guides and driver CD, and product catalogs.

This paperwork rests on the roof of another cardboard insert, under which you'll find the meat of the package, wrapped securely in an anti-ESD bag. 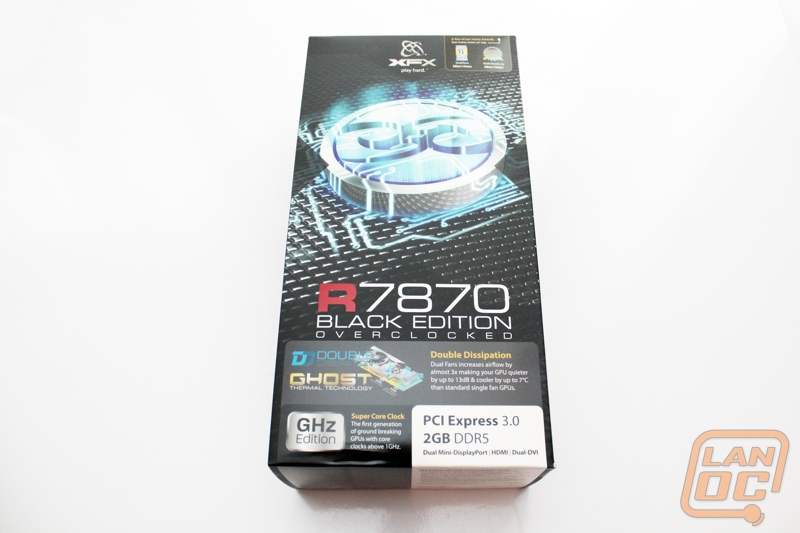 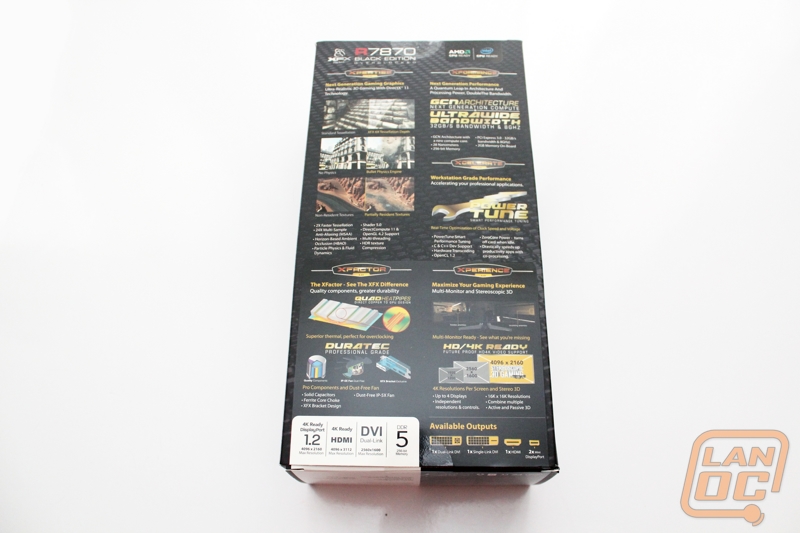 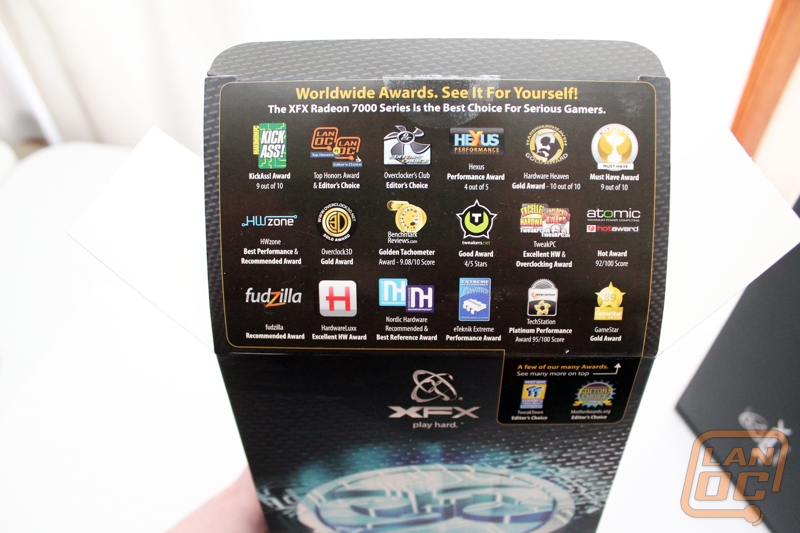 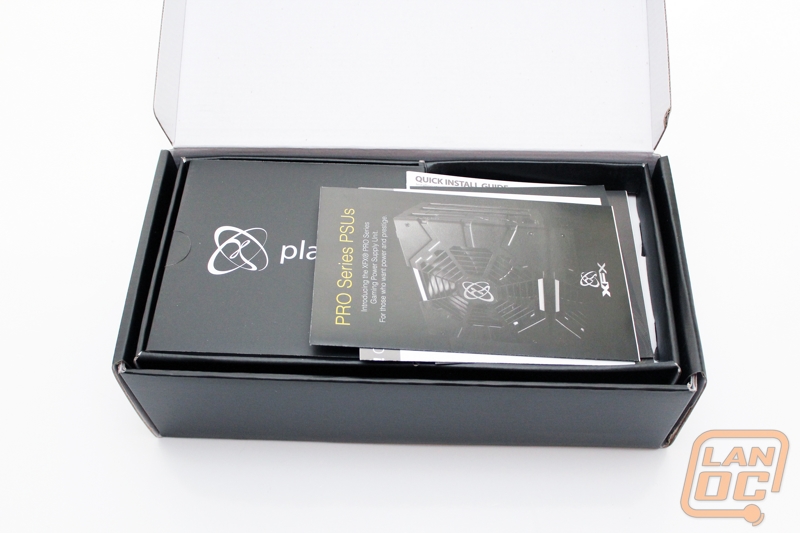 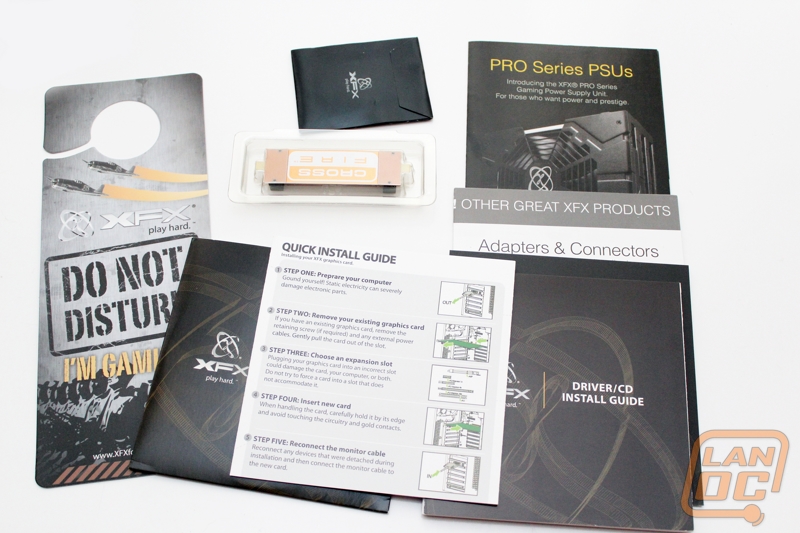 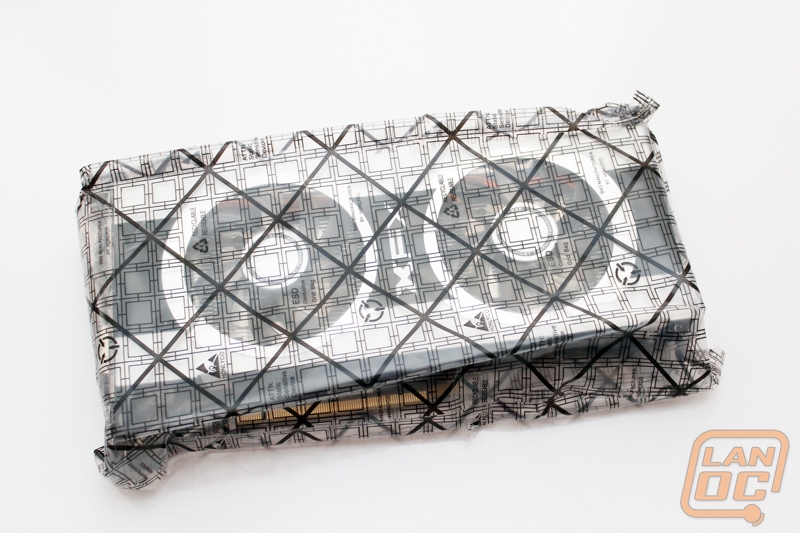 The truth of the matter is if you didn’t sit this card next to one of the 7900 series cards that we covered before you would have a hard time spotting the differences. The card is physically shorter, but this is still a fairly large card coming in at 9.5 inches long. Beyond the length and the name printed on the card there are two other ways to spot it. First you only have one crossfire connection, meaning this card is limited to two cards in Crossfire. Second you have two six pin power connections rather than an 8 and 6. 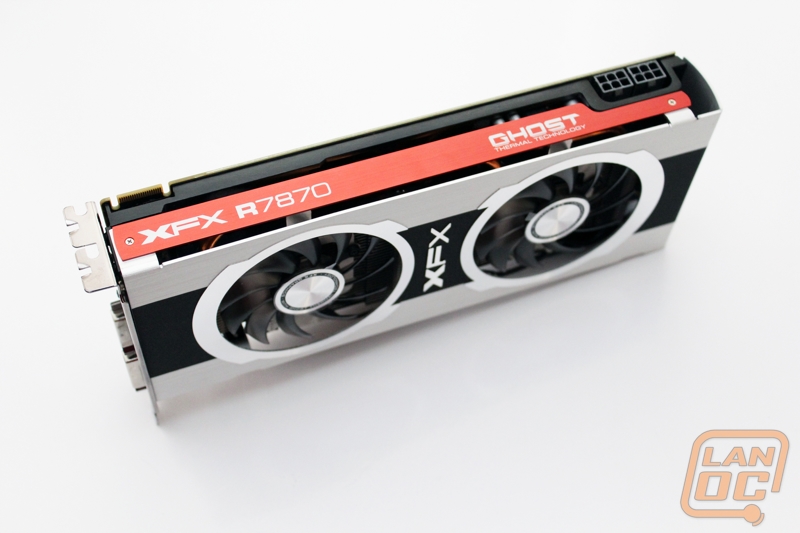 This is just a better view of the crossfire connection and of the cards name. I love that red strip that they use. A creative modder could easily remove that and color it to match their case. 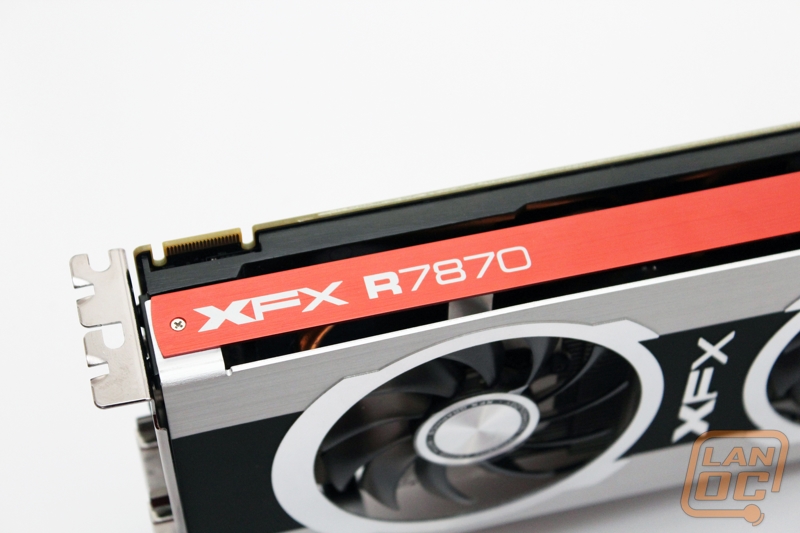 Like I said before, two six pin connections for the R7870. The reference pre overclocked design requires about 175watts, this overclocked design shouldn’t be pulling much more than that. But you do still have a little bit of headroom for overclocking still with the two 6 pins. 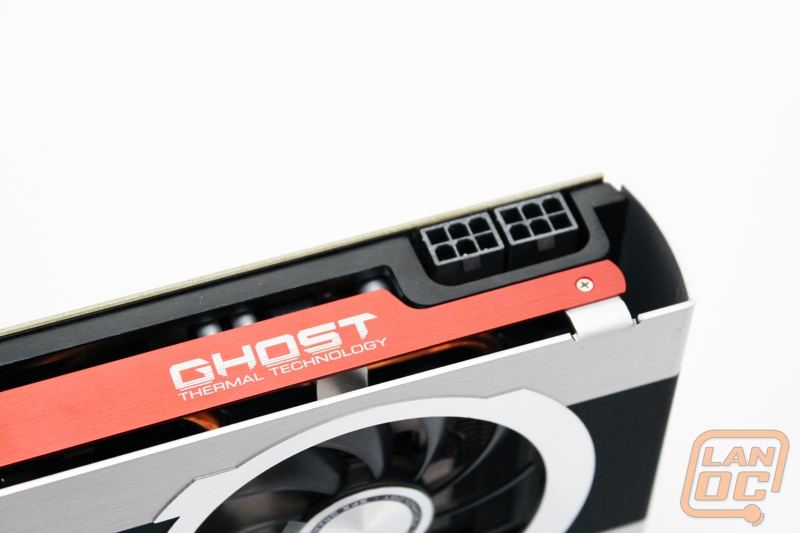 Just like the R7900 cards, XFX has done a good job closing off the end of the card to keep as much of the hot air going out the back of your PC rather than inside the case. As you can see most of the bottom is open, so it’s not perfect, but it’s better than what some other heatsinks do. 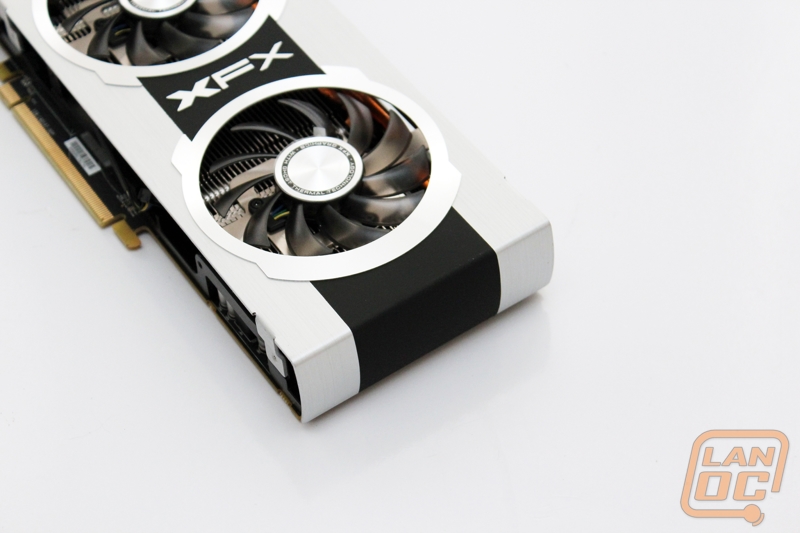 The third difference between this card and its big brothers is a fundamental change in the cooling design. You can’t even tell without looking very close, but the heatsink on this card has heatpipes. If you look at the top through the fans you can spot them. This is different from the R7900 series cards that went with a vapor chamber design. I did speak to XFX about this and was told that this was due to a size limitation, but I would also imagine it’s also a cost consideration considering the cards much lower price. 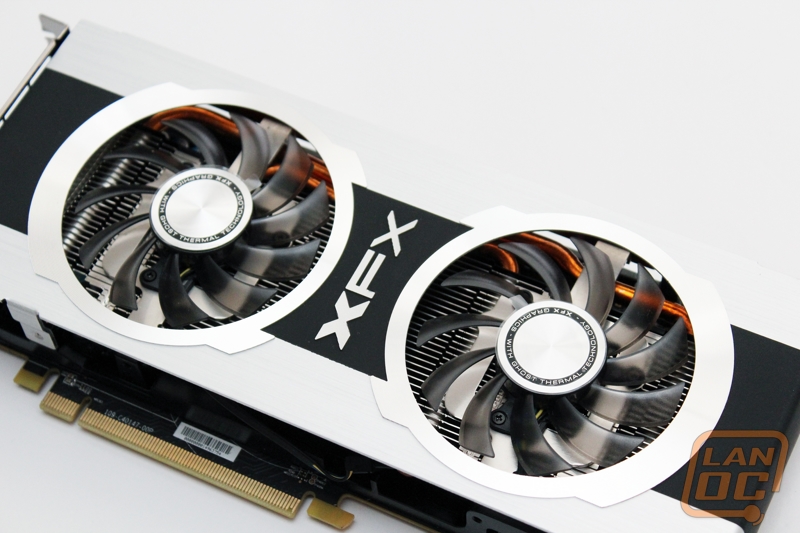 Heatpipes or vapor chambers you still get that kick ass styling and the dual fans that everyone loved about the R7900 series cards. I love the black strip across the middle and the raised machined areas around the fans and on the XFX logo. It’s really a shame that you won’t be able to see any of it when its installed in most cases. 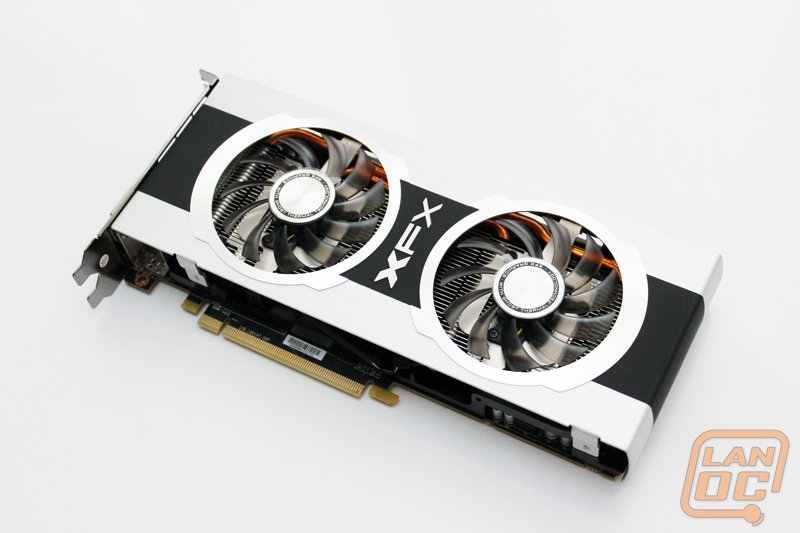 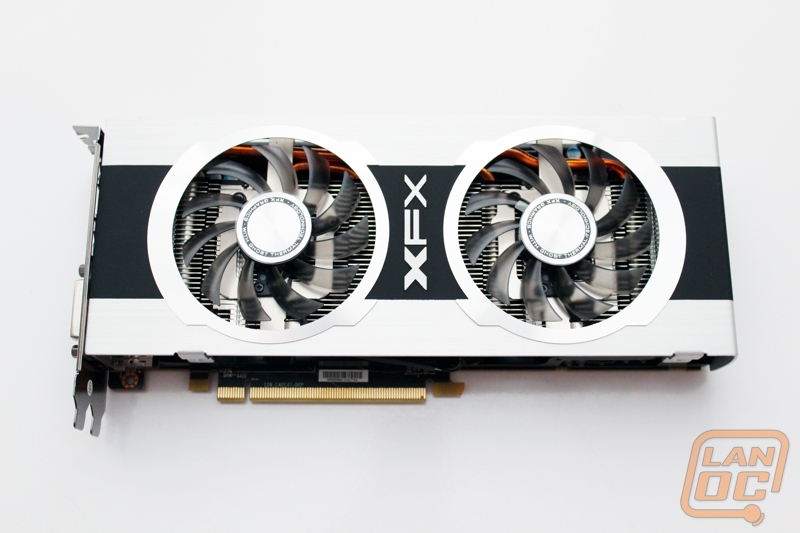 For airflow on the PCI slot cover you have XFX’s logo cut out inside the vent. This is a nice touch that no one else does. According to XFX this actually gives considerably more airflow than the stock design also. For connections you have both DVI connections, HDMI, and two mini display port connections. It’s nice to see that they haven’t dropped the second DVI port and gone to an HDMI adapter like some of the other manufactures. Personally I would like to see the two display ports go in favor of additional cooling, but without them eyefinity wouldn’t be possible. 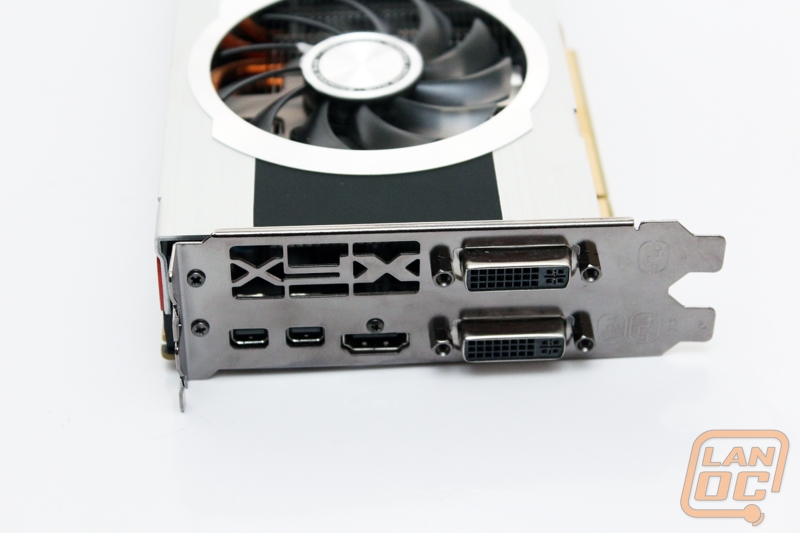 Here is a good shot of the black PCB, it’s a nice touch, especially when combined with the Black Edition’s heatsink. 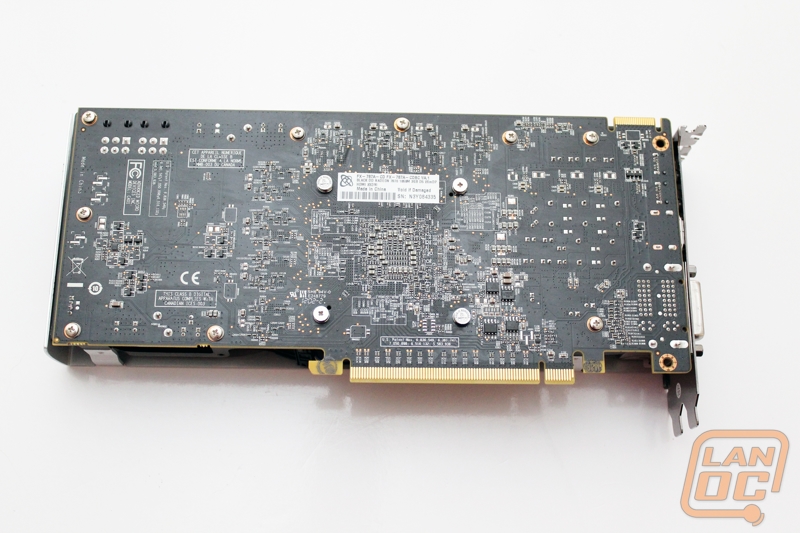 To put the slightly redesigned heatsink to the test we fired up Furmark and ran it through our standard 1080p benchmark. The end result was a max temperature of 72 degree’s. This is actually less than what we saw with the two XFX 7900 series cards. This can be attributed more to the HD 7870’s lower thermal output, but is still impressive none the less. As for noise, I did notice right away that at a normal idle the card is a little louder than we would expect, but as the fans ramped up there wasn’t any extra noise output. I actually had to check to make sure the fans were ramping up at all! 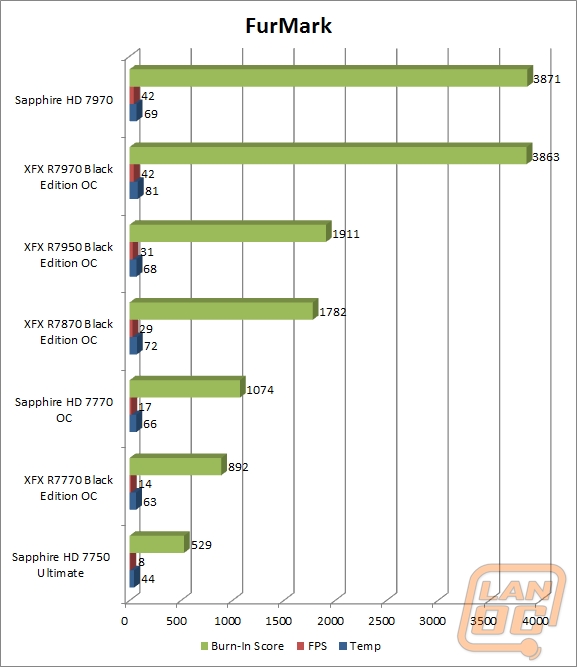 It goes to show you how far we have come along in the past year when the R7870 actually performs on par and above the performance of our GTX 580 reference card. It’s expected that AMD’s flagship card best the 580 but at a much lower price the R7980 out performing it is a nice bonus. We saw this across the board including in some cases like 3DMark Vantage Performance where we saw it best even our overclocked GTX 580 Classified numbers. 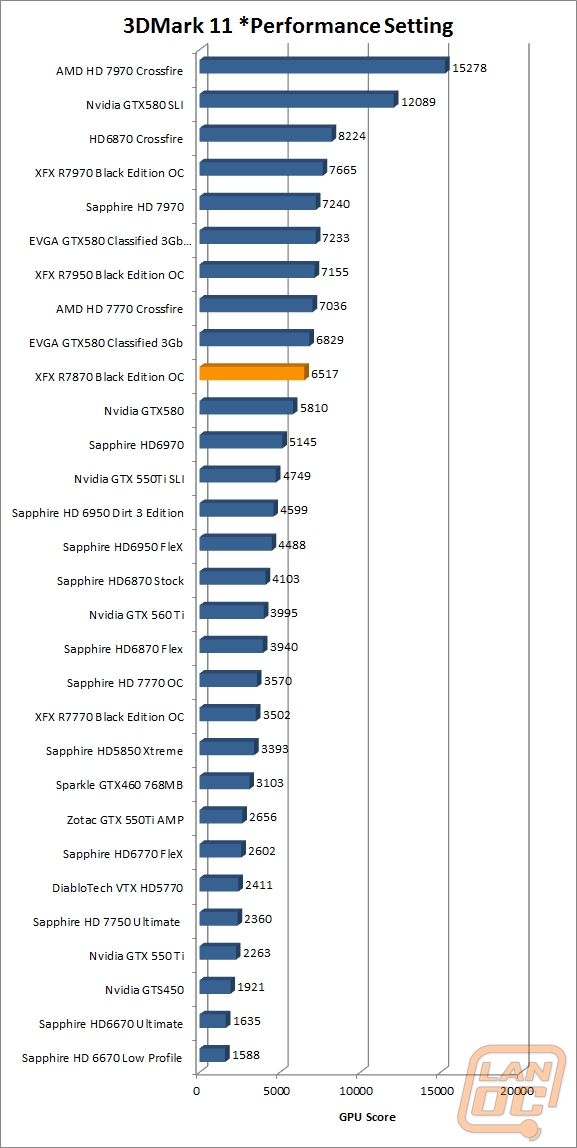 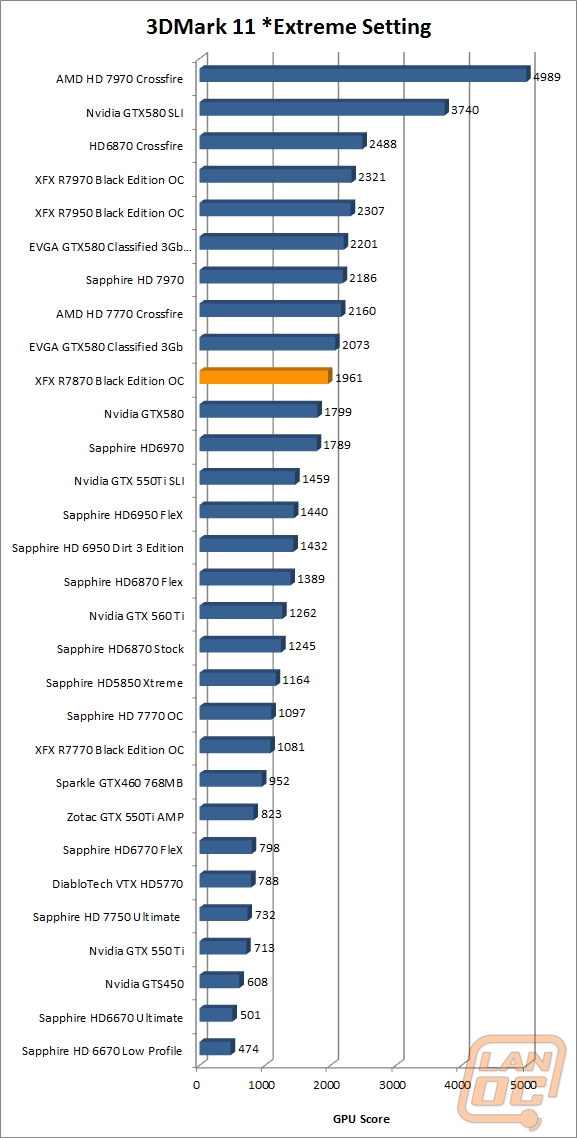 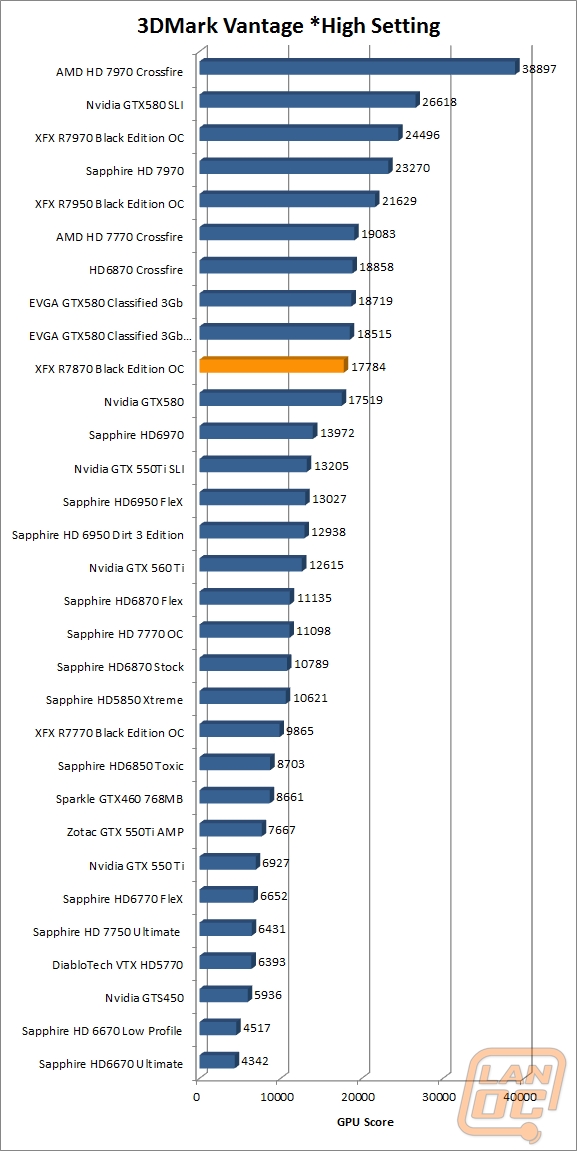 Performance wise in game the R7870 actually hits a nice sweet spot. A good example of this would be the numbers we saw in Battlefield 3. With an average FPS of just over 55FPS you can expect smooth gaming in one of today’s most demanding games with the settings turned up. You won’t have much headroom above that, but it’s nice to know that you can get this card and get to enjoy everything that is out there currently. 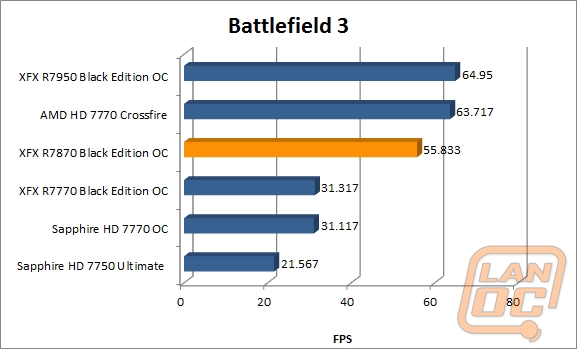 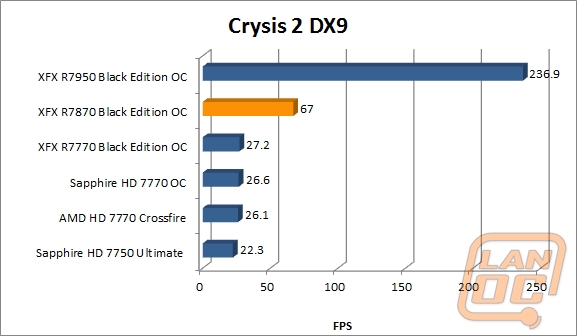 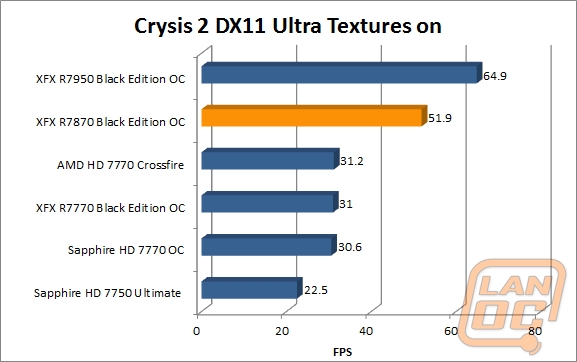 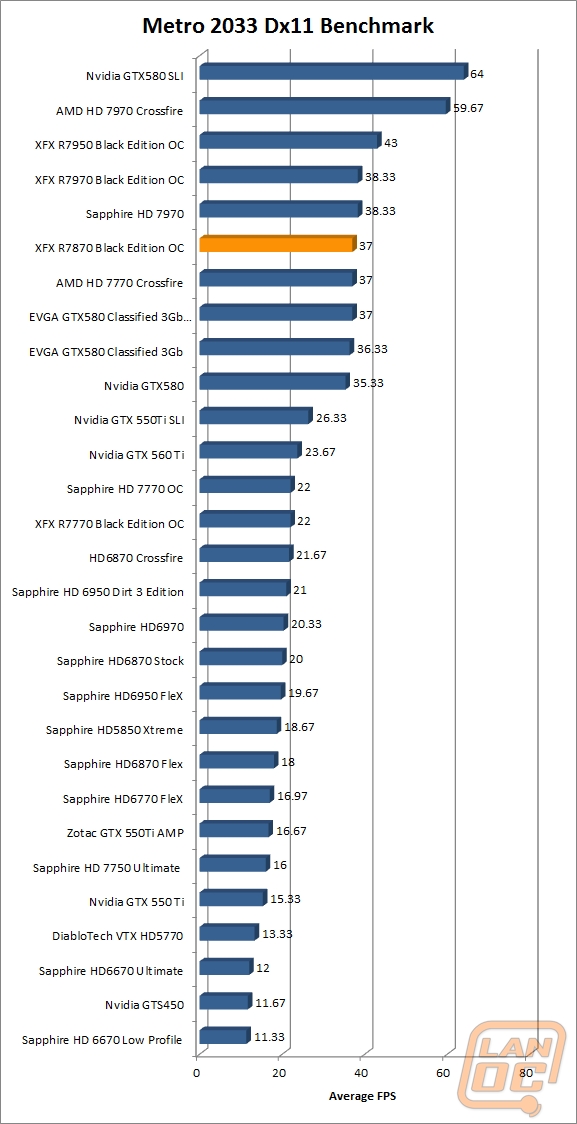 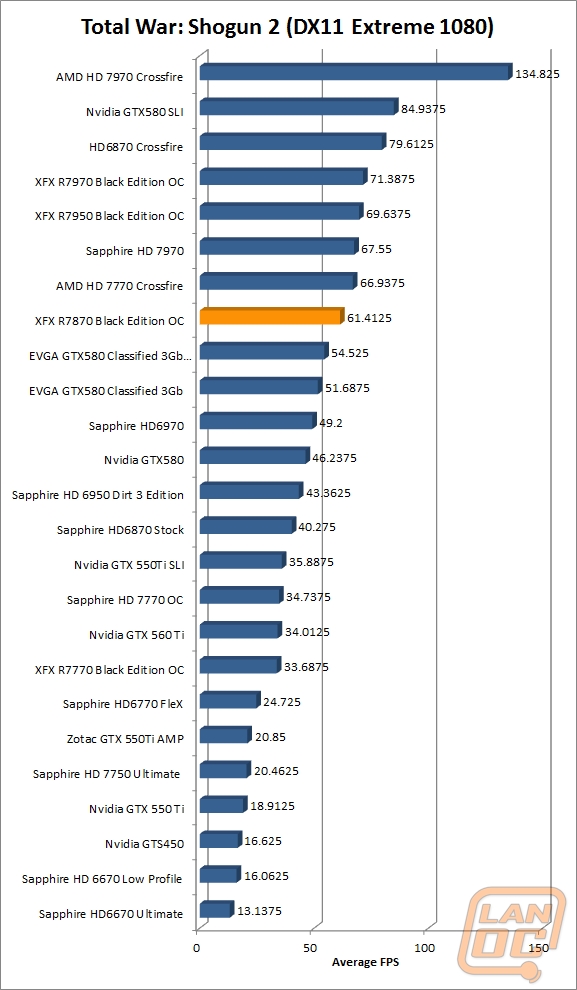 So we set out to find out if the R7870 Black Edition OC from XFX would hit the “sweet spot” both in performance and in price for a price conscious gamer looking for the best price/performance while still being able to play any game on the market. We have determined that the R7870 falls perfectly into that spot showing spot on performance in every day but most notably one of today’s most demanding games, Battlefield 3. So it comes down to the price point. A quick glance at Newegg shows 1.5 gig GTX 580’s as low as $390 with most being $410 and 3Gb cards starting at $480. Considering the performance we saw topped our 1.5 gig card and touched on the performance of the 3Gb Classified I can easily recommend the XFX R7870 Black Edition OC to anyone looking for that sweet spot performance at a price that is a little easier to swallow than the top cards. 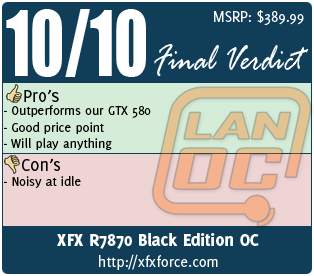 You might call him obsessed or just a hardcore geek. Wes's obsession with gaming hardware and gadgets isn't anything new, he could be found taking things apart even as a child. When not poking around in PC's he can be found playing League of Legends, Awesomenauts, or Civilization 5 or watching a wide variety of TV shows and Movies. A car guy at heart, the same things that draw him into tweaking cars apply when building good looking fast computers. If you are interested in writing for Wes here at LanOC you can reach out to him directly using our contact form.
Discuss this article
Log in to comment
Posts in discussion: XFX R7870 Black Edition OC