In the past we have taken a look at a variety of different SSD’s of all different sizes and shapes. Today we are going to check out something completely different. Today we are taking a look at a tiny 1.8 inch SSD that uses a PATA ZIF connection. For those of you who don’t know what a ZIF connection is, that is a zero insertion force connection. You typically see them inside of laptops and in this case this drive is normally used on small laptops and in some handheld devices. Being a PATA based (think IDE) these aren’t all about speed, but I wanted to check the drive out due to its size. So let’s take a look.

The box for the Pro IV as still surprisingly large considering the drives small size, even so they got all of the important information right onto the top of the packaging. You have a large RunCore logo, the model name and most importantly the capacity. The one thing that was missing from the top was there isn’t any mention of this being a ZIF drive, but this is a box design that gets used on multiple drives so it is understandable. On the back of the box there is a fairly large sticker with more details about the drive including the full model name, read and write speeds, warranty, and dimensions. This is actually a lot more information than you would typically find on any SSD packaging, I was very happy with this. 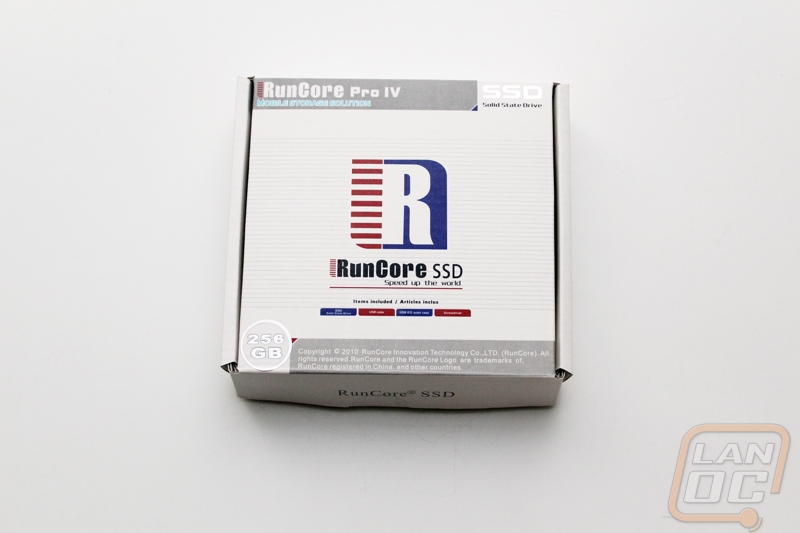 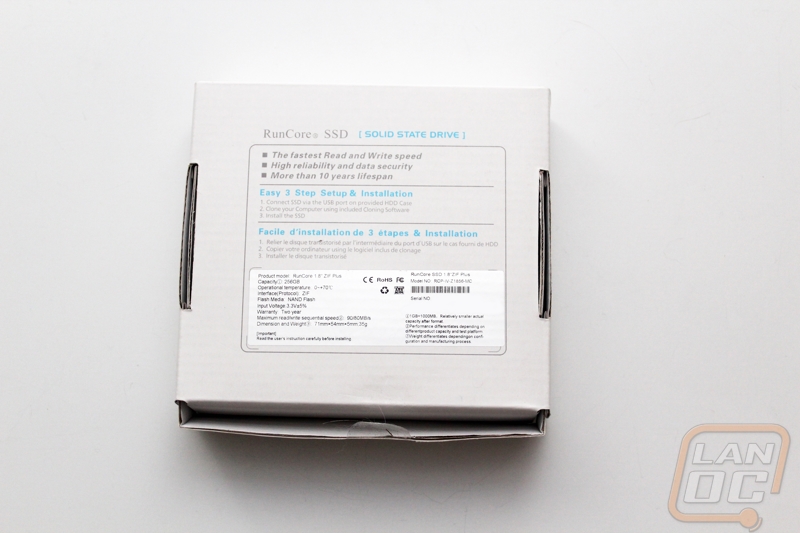 Inside you will find a user guide as well as the drive itself tucked into its foam housing. The small size is more obvious due to the boxes size. Up under the SSD you will find another foam tray with a USB 2.0 cable and a USB 2.0 enclosure. When you open the enclosure up you will find a short ZIF cable and the screws needed to install the small SSD into the enclosure if you need too. Being a fairly rare connection type it’s nice to see that RunCore included this enclosure as a way to hook up your old ZIF drive to another PC to back everything up, unlike other drives you aren’t going to have this connection inside your everyday PC. 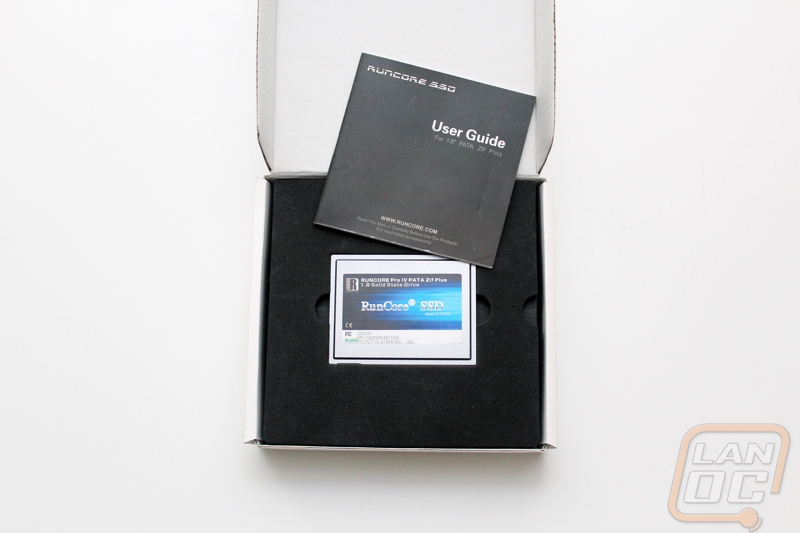 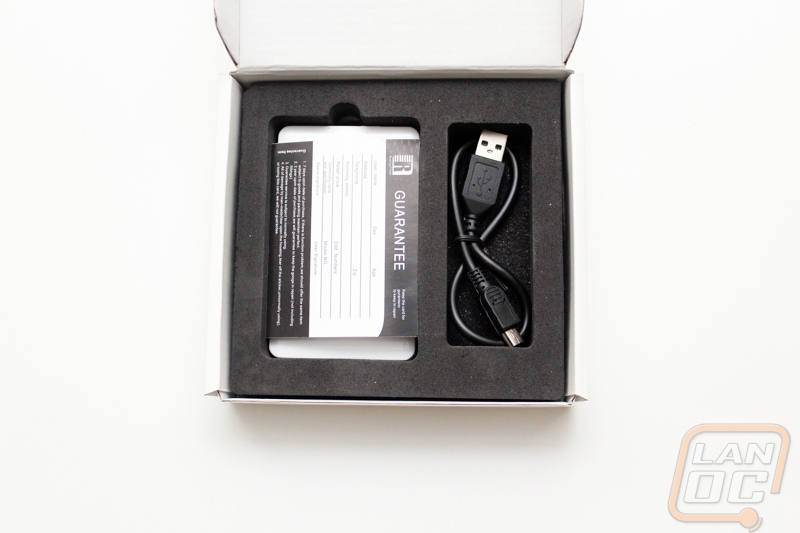 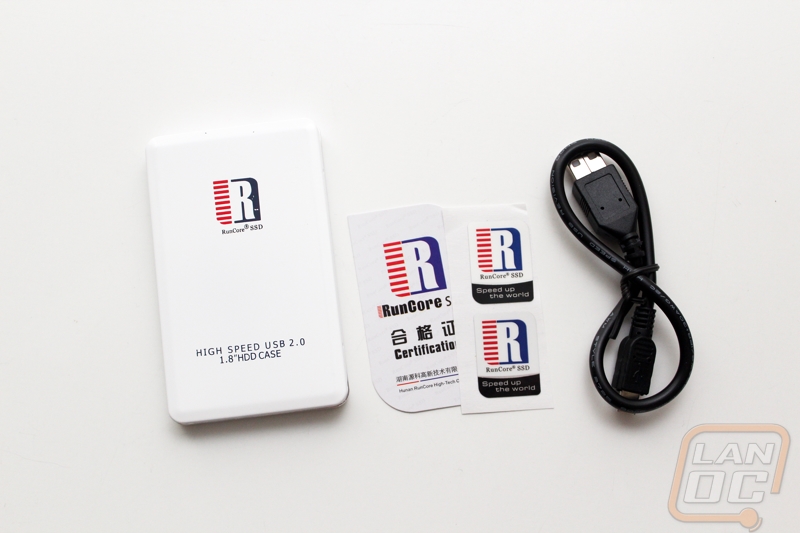 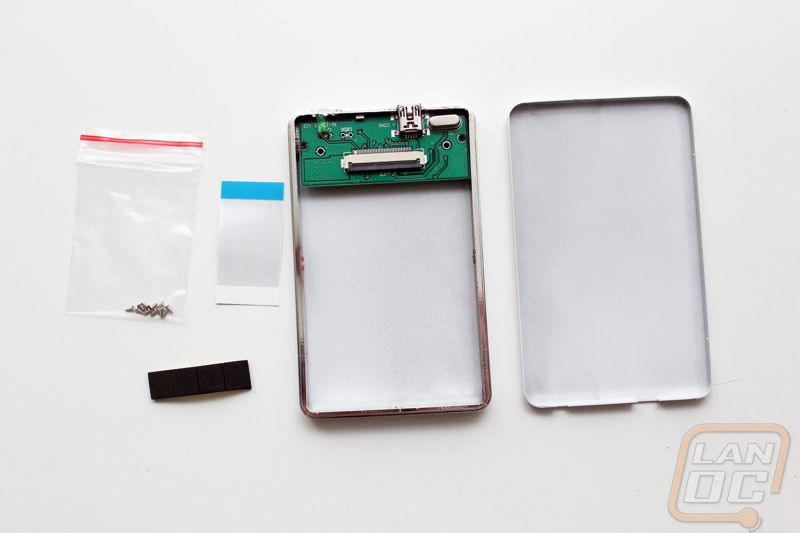 Our Pro IV PATA ZIF drive looks fairly typical in this picture, it isn’t until you see the drive next to something else that you can finally take in its small size. For branding the top of the drive does have a nice blue and black RunCore sticker that has the drives model name, part number, and serial number on it as well. 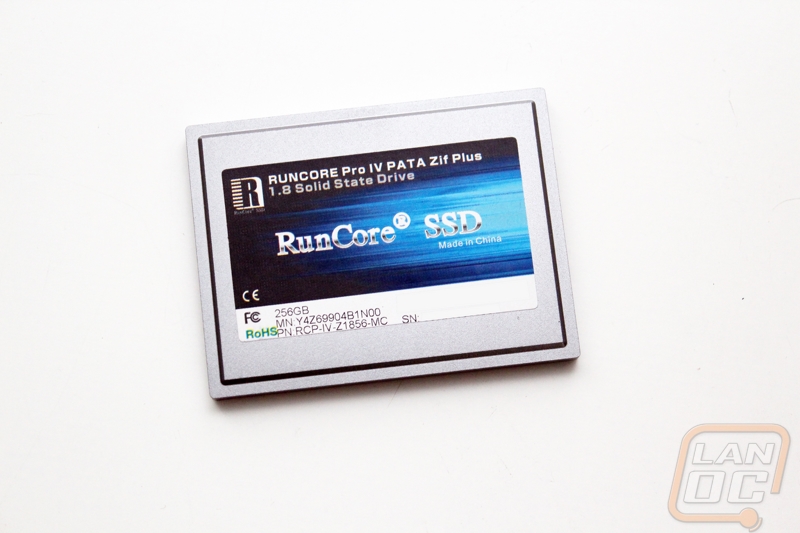 You would normally think that 1.8 inches isn’t THAT much smaller than a normal 2.5 inch SSD. But as you can see when I put it up next to a standard 2.5 inch SSD that the difference is mind blowing. Not only is the Pro IV PATA ZIF shorter and skinnier, but the thickness difference is about half. To give it a little perspective, the Pro IV PATA ZIF is actually smaller than a credit card. 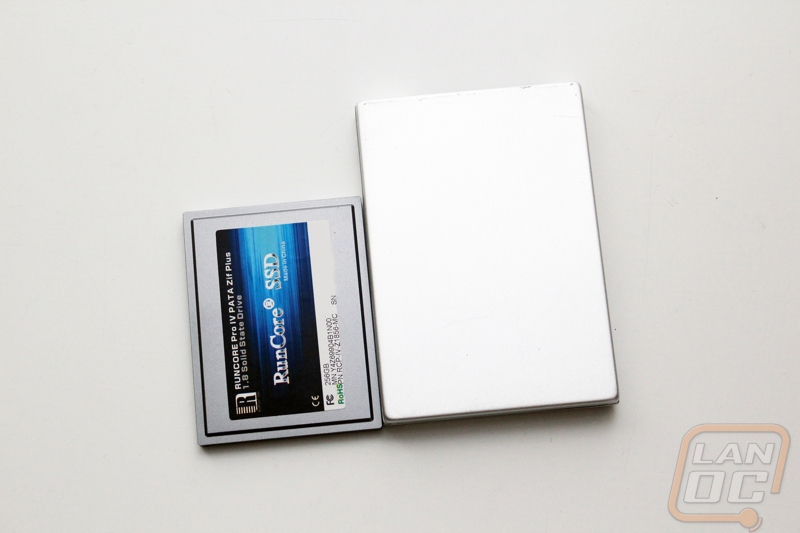 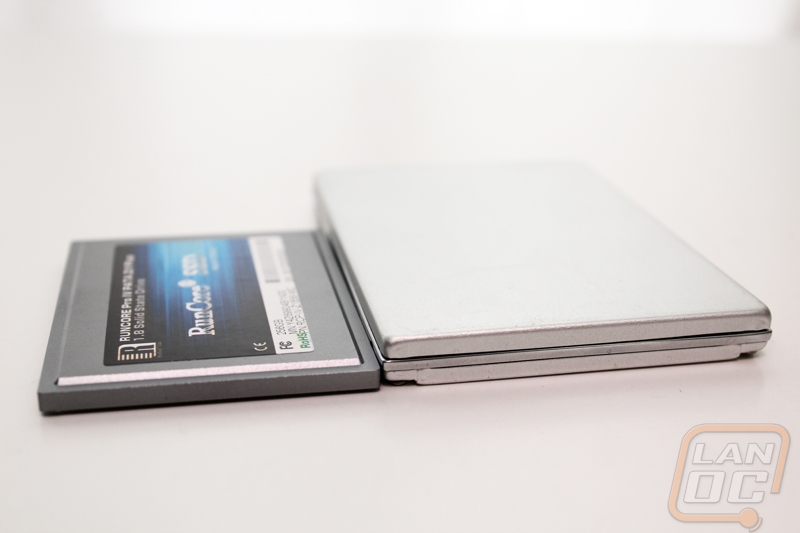 With the Pro IV PATA ZIF flipped over we finally have a peak at the drives ZIF connection. There isn’t too much to it really, it is about an inch wide and just like other ZIF connections there is a small black clip on the back that you flip up before slipping in the ribbon cable and when you snap it back down the cable is held in place. 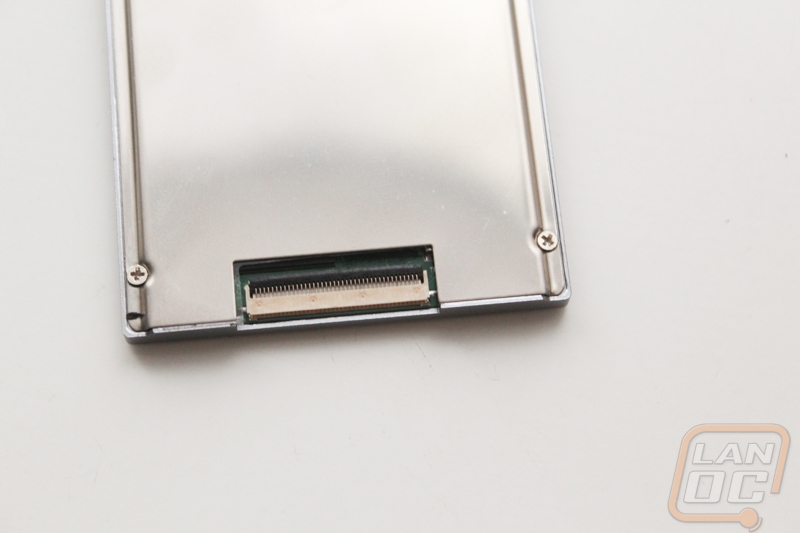 After removing four of the smallest screws I have ever seen in an SSD I had a full peak at what was inside of the tiny Pro IV PATA ZIF. I wasn’t sure really want to expect being our first 1.8 ZIF SSD, but it’s easy to break everything down. On the right we have four unknown NAND chips that help us reach the drives current 256GB capacity, RunCore really packed them tight up against each other to make use of the limited space. On the flip side of the PCB we can also see that there is room for four more, this goes along with the Pro IV PATA ZIF’s highest capacity available of 512GB. For a controller they are using the Silicon Motion SM2244. There is also a Marvell SATA to PATA bridge that converts this drive down to the PATA format that the ZIF connection requires. Then at the end of the PCB you have the actual ZIF connection, you can see how little space it takes up, helping with this drives size. 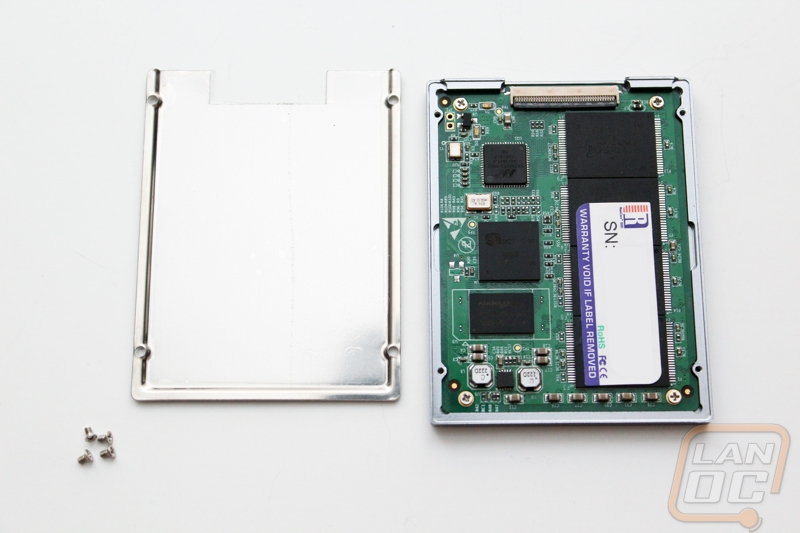 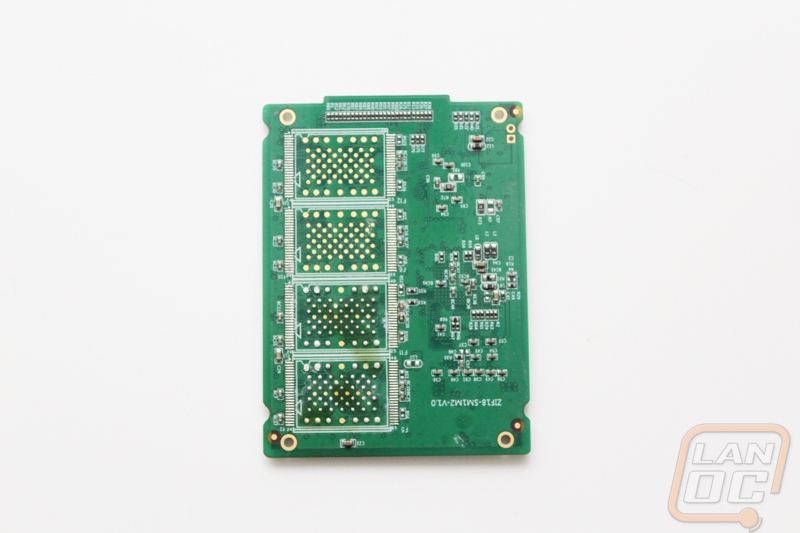 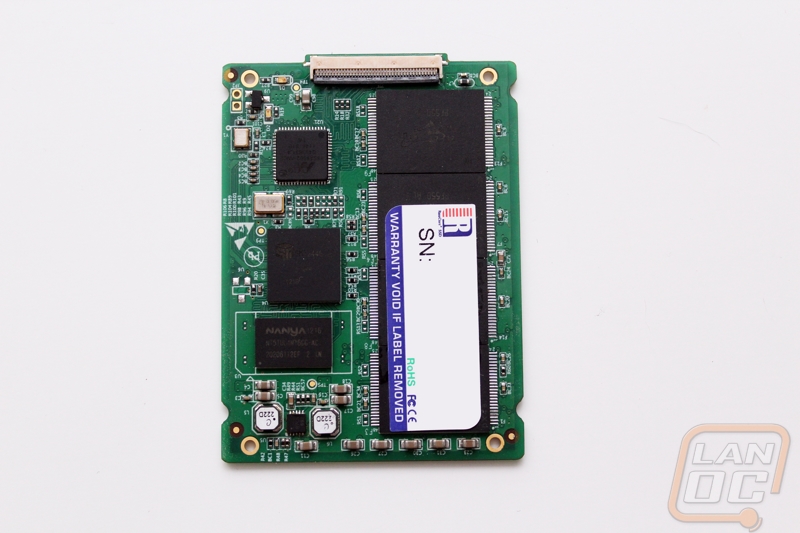 Here you can see just how small everything is with a US quarter for reference next to the PCB. 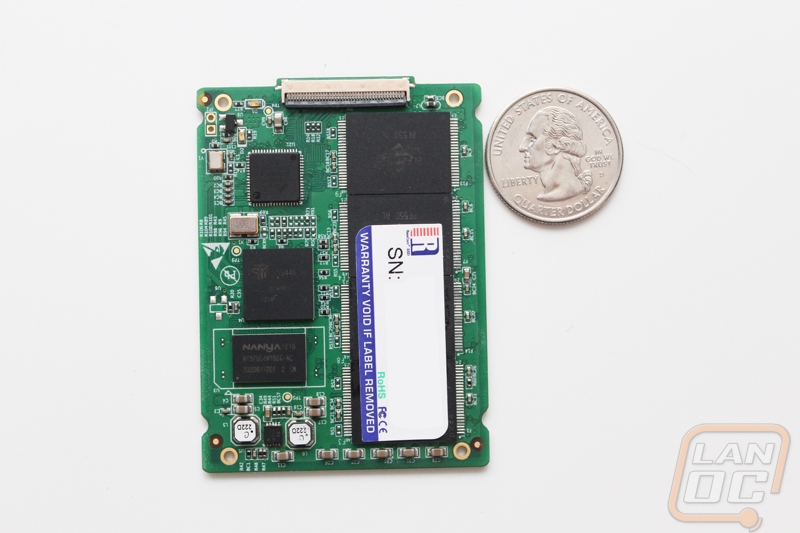 For reference with the casing back on, here are a couple shots of the drive with four pennies stacked up to show its total height. 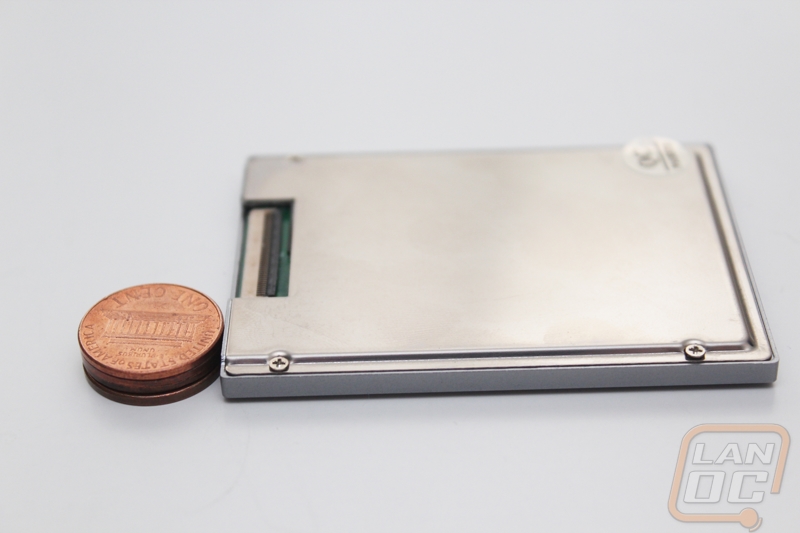 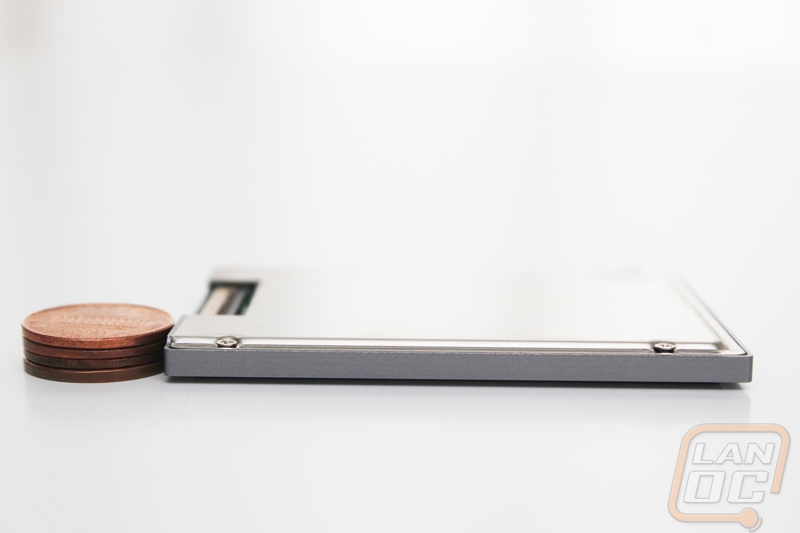 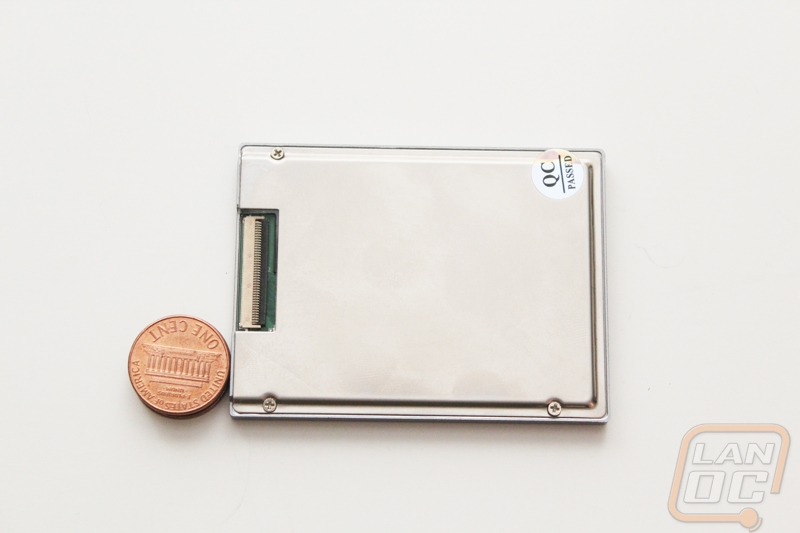 I didn’t really have high hopes when jumping into the performance of the tiny Pro IV PATA ZIF. The drive is limited right out of the hole due to its ZIF interface, but people with first gen MacBook Air’s and other small form factor laptops and devices from before Intel introduced the Ultrabook standard all still need drives. In this case, with the 512GB model especially RunCore is able to offer the large capacity that newer laptops have available to old models. The ZIF interface is of course limited to PATA speeds, even though it is an SSD. Because of that I didn’t go with the performance tests that we normally use on SSD’s because comparing this to a new SATA 3 drive wouldn’t be all that fair. So what I have done is test the drive using a SATA to ZIF adapter and then retested using the USB 2.0 interface that RunCore provided. 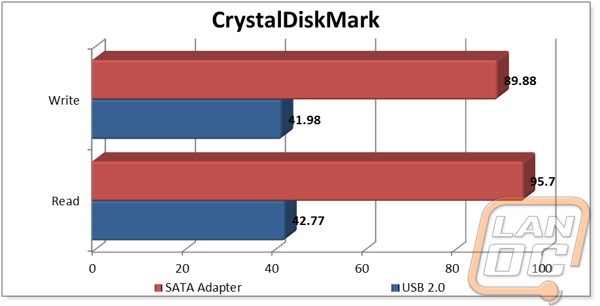 As you can see, it’s not the performance numbers that we would want to see from  a SATA 3 drive, but considering the interface the Pro IV PATA ZIF performed up to par. It’s very disappointing that they didn’t provide a USB 3.0 interface to give better speeds via USB 3.0 as this could be a great pocket USB drive if that was the case.

More importantly you have to consider what people who need a ZIF SSD have currently. The fastest ZIF hard drives are all 4200RPM drives with some even being slower than that. The MacBook Air for example came with a 60 gig 4200 RPM hard drive, I can’t imagine how painful that would be to use considering what we are used to today. Going from that to a much larger 256 or 512 GB SSD with four times the performance would be amazing.

So at the end of the day what do we think about the RunCore Pro IV PATA ZIF 256GB? Well I went into this really hoping that this would be a perfect solution for people who build small computers and compact case mods. The ZIF interface is just too limited for that performance wise. But I did come out really impressed with the improvement that RunCore has done over ZIF hard drives and SSD”s that are available in slightly older laptops and device like the MacBook Air. You could see a 4 time improvement in performance over your old 4200 RPM hard drive as well as the possibility of increased capacity with the larger 256 GB and 512 GB drives that RunCore has available.

Really beyond that my other focus was on the USB enclosure that came with the drive. I found that because of its small size you end up with a nice pocket sized drive that you can pack with you. The only downside was the USB 2.0 interface. I was impressed that the drive did max the performance of the USB 2.0 interface, but it could have been twice as fast with USB 3.0, that would have made it a good option and faster than some of the larger USB 3.0 flash drives as well.

You might call him obsessed or just a hardcore geek. Wes's obsession with gaming hardware and gadgets isn't anything new, he could be found taking things apart even as a child. When not poking around in PC's he can be found playing League of Legends, Awesomenauts, or Civilization 5 or watching a wide variety of TV shows and Movies. A car guy at heart, the same things that draw him into tweaking cars apply when building good looking fast computers. If you are interested in writing for Wes here at LanOC you can reach out to him directly using our contact form.
Discuss this article
Log in to comment
Posts in discussion: RunCore Pro IV 1.8 Inch ZIF SSD