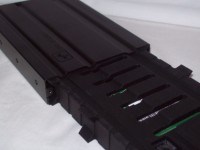 I've had the pleasure of reviewing a lot of external enclosures, a product that not too long ago was considered a luxury in owning for the average consumer. Nowadays, with advancing technology and lowering prices, its almost odd to see a user without. Naturally, there is an enormous selection of models out there, all (for the most part) sporting the same data transfer rate. So what is it that causes model A to sell more than model B? In-Win knows, and has sent us an example known as the Ammo, to find out for ourselves.

The Ammo comes packaged in a cardboard material box, dual toned with a black background and brown font. Not quite the flashy, colorful, catch-consumer's-attention facade you usually see, but it still stands out if for nothing more than its simplicity. The entire Ammo product is designed with a military theme, and the package truly is something you'd expect to see on the shelves of an equipment locker. The actual containing box slides out of the external cardboard sleeve, with the enclosure immediately open to view in a blue sealed bag as you open the fold. Beside it lies a piece of cardboard with a thumb hole, under which cords and other accessories are stored. Among these accessories you'll find two RFID sensors keys (we'll hit their application later), one of which is an actual dog tag with Ammo information on one side and a cross-hair on the other, as well as a more simple red key ring. 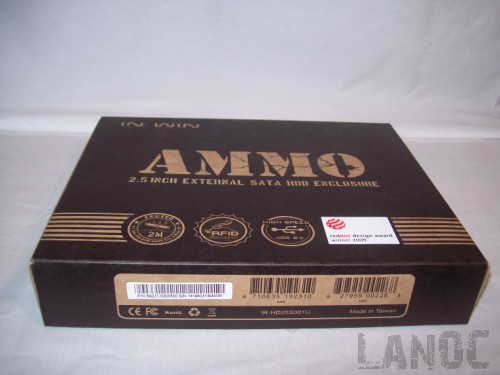 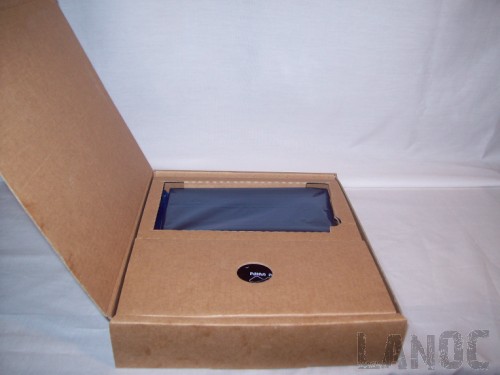 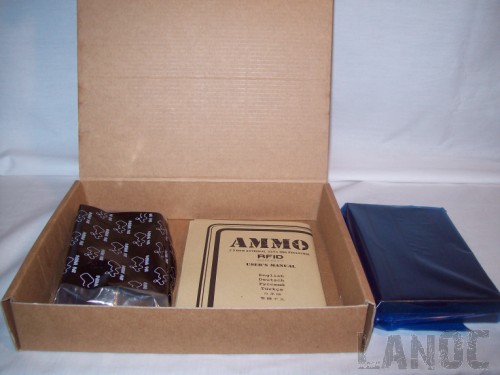 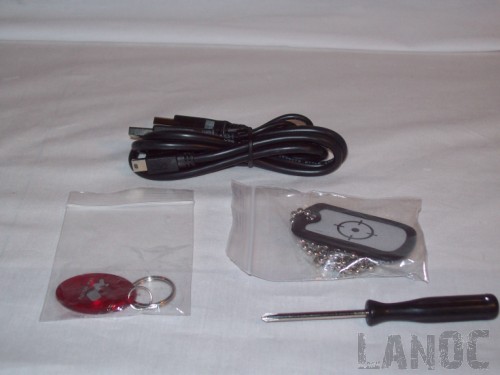 In-Win's creativity hasn't spared the manual, either. The packet folds out several times to create a life-size gunfire target, complete with actual record lines (date, calibur, weapon used, location, and so on...), and one the reverse side the instructions in six languages (English, German, Russian, Turkish, Japanese, and Chinese). This is an extremely cool idea, but actually using the manual can be somewhat of a pain. Unfolding it is very similar to one of those pocket atlas' that you pick up at visitor stations, and trying to handle it to read can be awkward, especially since the English version takes up a fraction of the total sheet. In the middle of the text instructions, however, you will find detailed images demonstrating how to install the hard drive, but when it comes to figuring out how to encrypt the hard drive, you're going to have to track down the 10pt text walk through. 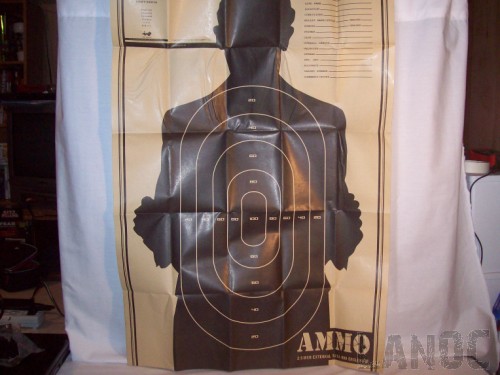 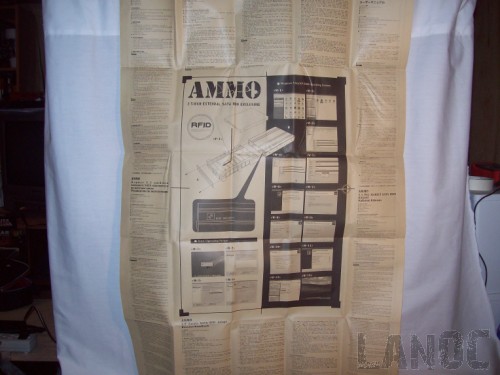 The backside of the enclosure, with the AC plug in and USB-mini, also has two screws on either side. They're simply Philips-head, but you won't even need to track down a screwdriver; In-Win has provided a nice little one. Removing the screws will allow for the metal faceplate to be removed, leaving the head of the rubber anti-vibration material, which simply pulls out of the metal enclosure. The board which the hard drive plugs into is set in this rubber, so you'll acutally be positining the drive into this material as well. This can be a little awkward as well, the easiest way is to twist back the rubber sides so the every corner of the board is open to pull the hard drive clean against to. Once the drive is attached, the rubbed can be folded back and lifted on to the drive, snugly securing it. It takes a little more effort than other models, but the security and vibration reduction are far, far worth it. 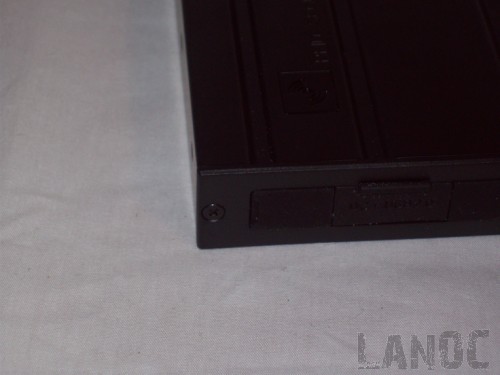 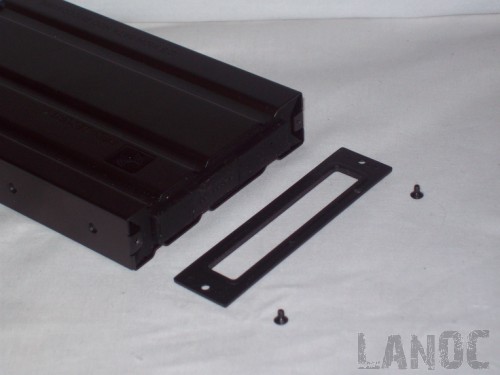 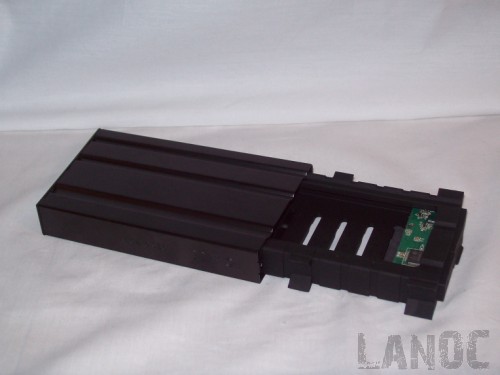 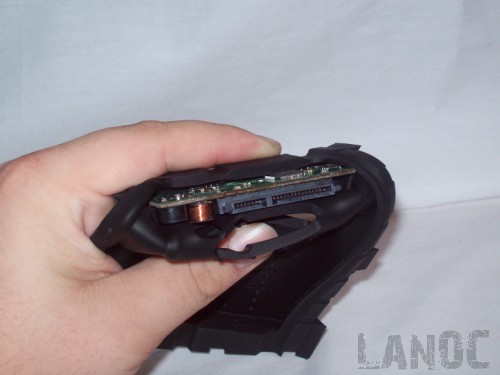 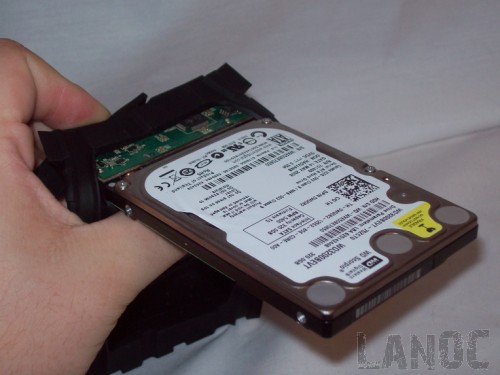 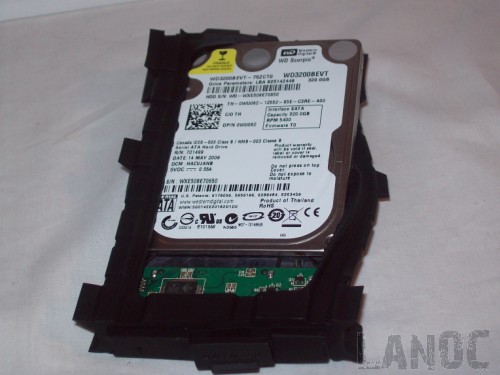 Hard drive assembled, the rubber holster simply slides right back in, and is once again secured with the metal face-plate and screws. From here, its only a matter of connecting the mini-USB to two open USB slots and the OS will take it from there. 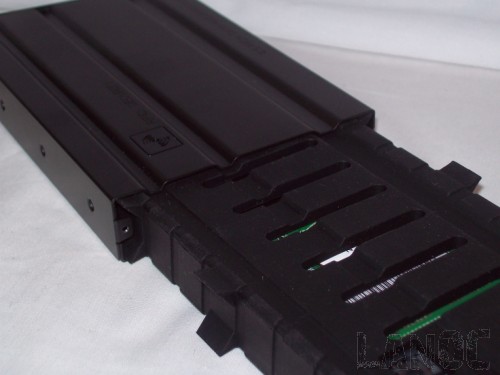 The data transfer is the standard 480Mbps with high speed 2.0 ports. I had a few games on my 2.5" that I needed transfered, so it was a great opportunity to put the rates to a test. With a combined memory of just over 25Gb, the transfer took a little over 24 minutes. One of the only major issues I have with this enclosure is the absence of eSATA, not only because of the obvious increase in transfer speed but also because there is plenty of space to include it. Its all the more odd considering In-Win has opted to included an AC input port, though no wall outlet is supplied. One does have to consider, however, that at least half of the customer base will be used by laptop/Mac book owners which don't traditionally sport an eSATA port, but when its obvious In-Win is trying to please every consumer with the additional power supply option, eSATA doesn't seem at all unreasonable. As far as the straightforward data transfer goes, the Ammo excels. The enclosure also sports RFID encryption, requiring one of two included sensor keys to access the files. To use this feature, however, the hard drive must be formatted and partitioned for the encryption: in other words, if you're going to use a drive that has data stored on it, you'd better back it up. There is a little procedure to go with setting up RFID to register the keys to the device, but as long as you follow the included instructions everything runs smooth. Without taking advantage of RFID, however, the Ammo will pick right up on your drive the moment you plug it in with all your files available.

The actual enclosure itself is made of a sturdy metal material that resembles an ammunition clip, hence the name. The external is fairly light-weight, even with the drive installed. In-Win has also put a lot of effort into reducing vibration from disk read, and its paid off as well.

The Ammo looks great, from the moment you open the box to the LAN party you get to show it off at. Everything you need for installation is included, and the process itself takes minute effort at most. The enclosure connects via USB, both for power supply and data transfer, though as mentioned the option for a wall power supply is there. The feature that has made itself scarce, however, is eSATA, so you're going to be stuck at around 480Mbps. However, with a USB2 exclusive connection and lightweight material, the Ammo is extremely portable. And with In-Win's investment in anti-vibration, you can't even tell the external is on. The RFID encryption is a great option, providing the ultimate lock for those looking to keep files secure, though you'll probably want to start with a fresh drive. Otherwise, the Ammo does a great job picking up on the hard drive with plug and play and sports exceptional read and write speeds for USB. 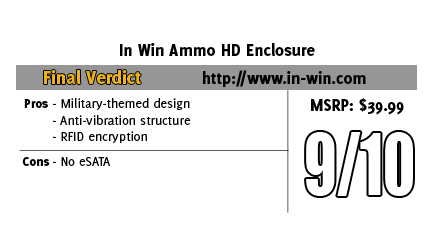 You might call him obsessed or just a hardcore geek. Wes's obsession with gaming hardware and gadgets isn't anything new, he could be found taking things apart even as a child. When not poking around in PC's he can be found playing League of Legends, Awesomenauts, or Civilization 5 or watching a wide variety of TV shows and Movies. A car guy at heart, the same things that draw him into tweaking cars apply when building good looking fast computers. If you are interested in writing for Wes here at LanOC you can reach out to him directly using our contact form.
Discuss this article
Log in to comment
Posts in discussion: In-Win Ammo 2.5" External SATA Enclosure

We have 1527 guests and one member online