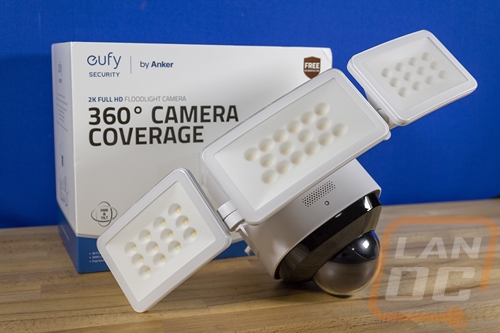 The Floodlight Cam 2 Pro is a huge light with three different light arrays as well as the pan and tilt 2K camera dome on the bottom of the housing. That along with everything needed to mount the light makes for a light that is significantly larger than any other floodlight out there. Most are just your standard dual lights and a camera shoved in the middle and eufy went out of their way to make the Floodlight Cam 2 Pro completely different. Dome cameras with pan and tilt functionality are never small though and the triple light does help hide some of the space that the camera takes up. Overall I would say that while it is very large, it takes up less space than a pan/tilt camera as well as a floodlight would. 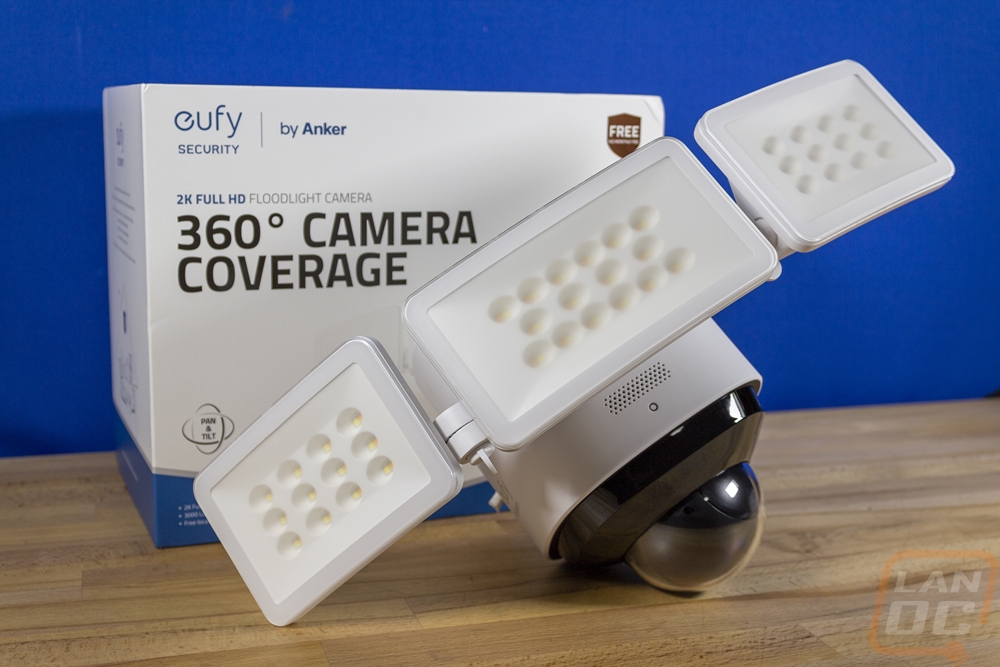 The Floodlight Cam 2 Pro has two different tops depending on how you have it configured. Eufy has designed it in a way that you can mount it on a roof eve or flat on a wall. The mounting side has this thick padding around it as a seal with three wires coming out of the camera/light. Then in the center, there is a hole for the large mounting screw. This housing has a latch in it in the middle and can flip down for wall mounting. The second picture below this shows that. That area does have the legal information and certifications printed on it as well as a QR code in the middle used for setting the camera up. The wall configuration does leave a flat area that eufy warns can be a spot where birds may nest which I can see. 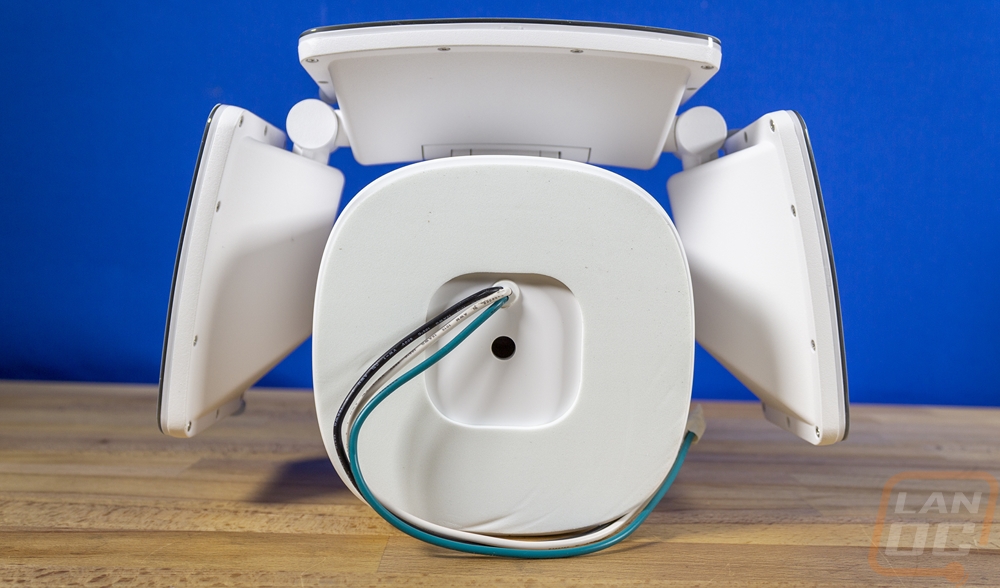 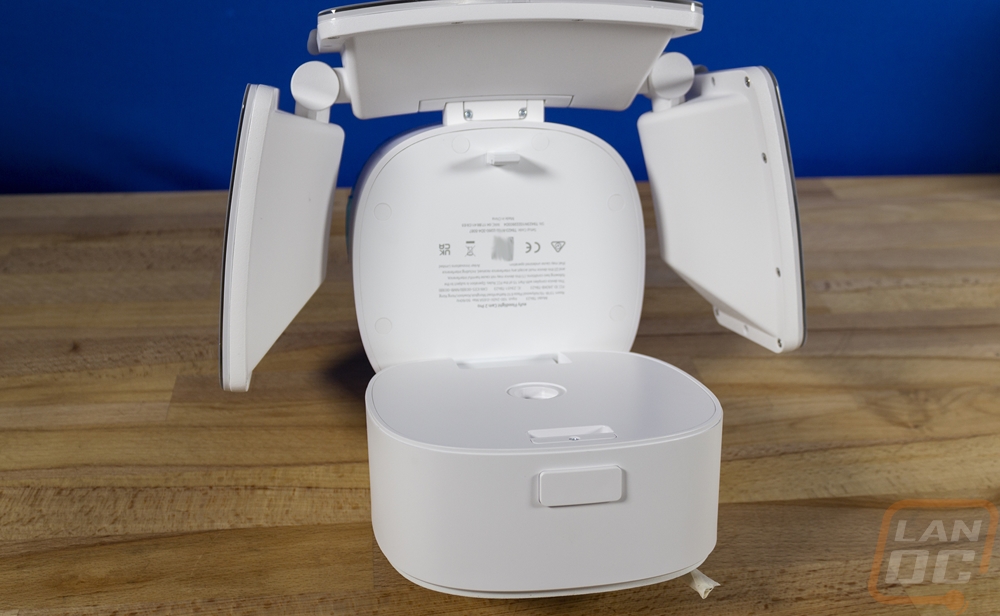 The Floodlight Cam 2 Pro as I mentioned before has a triple LED floodlight configuration hanging off of the front. All three of the lights are mounted together and the middle light is wider but has the same 16 LEDs that both of the outer lights have. These do have a diffuser over the front to help blend the LEDs some and eufy has doubled up the LEDs in each of the housings to allow for color tone adjustability. Each light has 16 yellowed lights and 16 blue and you can control the color temperature through the app. The front of the Floodlight Cam 2 Pro does also have a small ring status LED and below that hidden behind the floodlights is a speaker and microphone combo as well that lets you hear and talk to people through the camera. 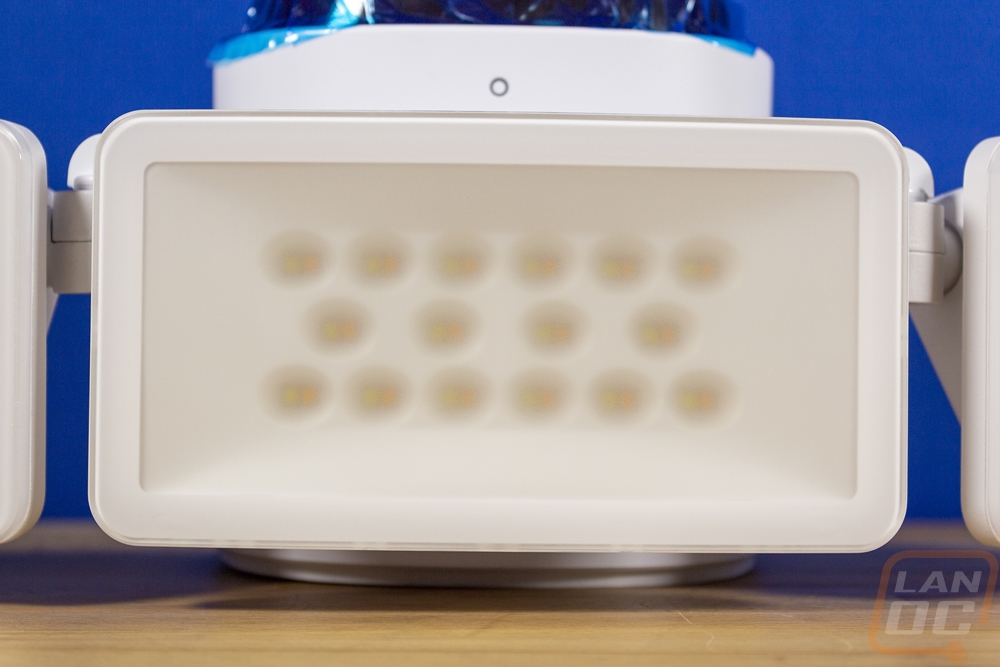 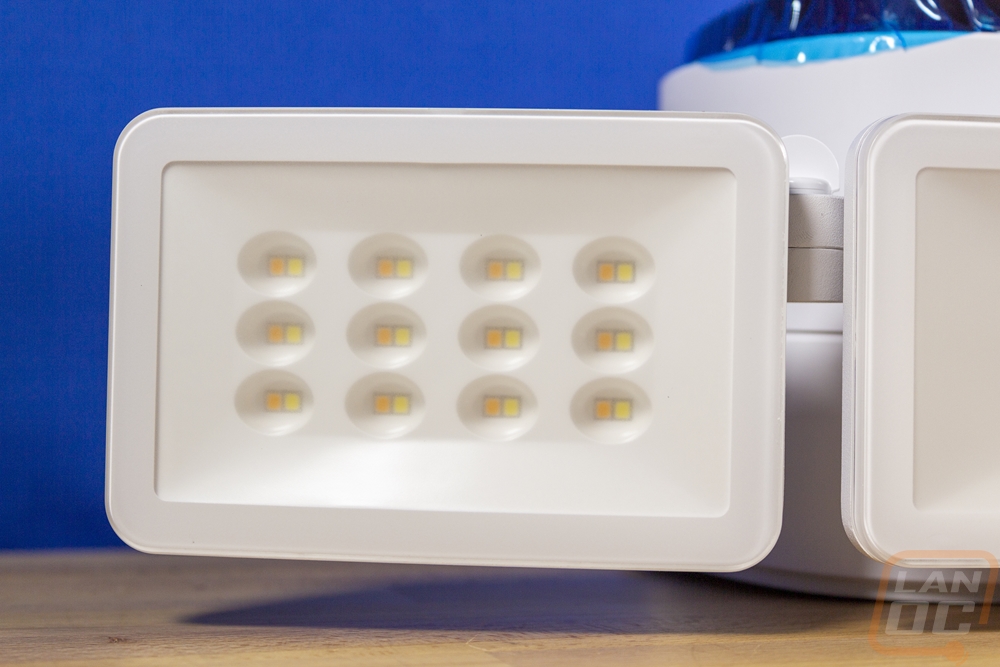 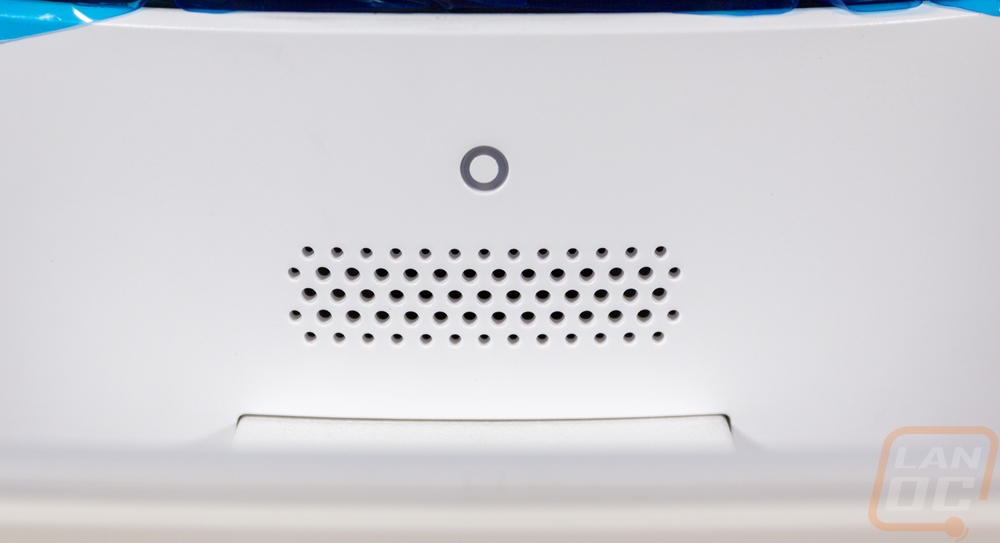 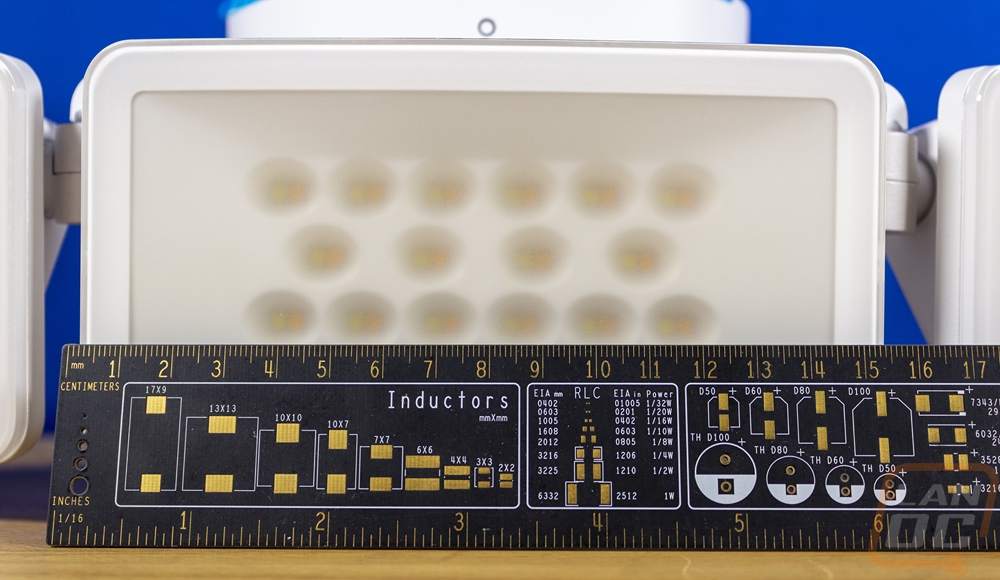 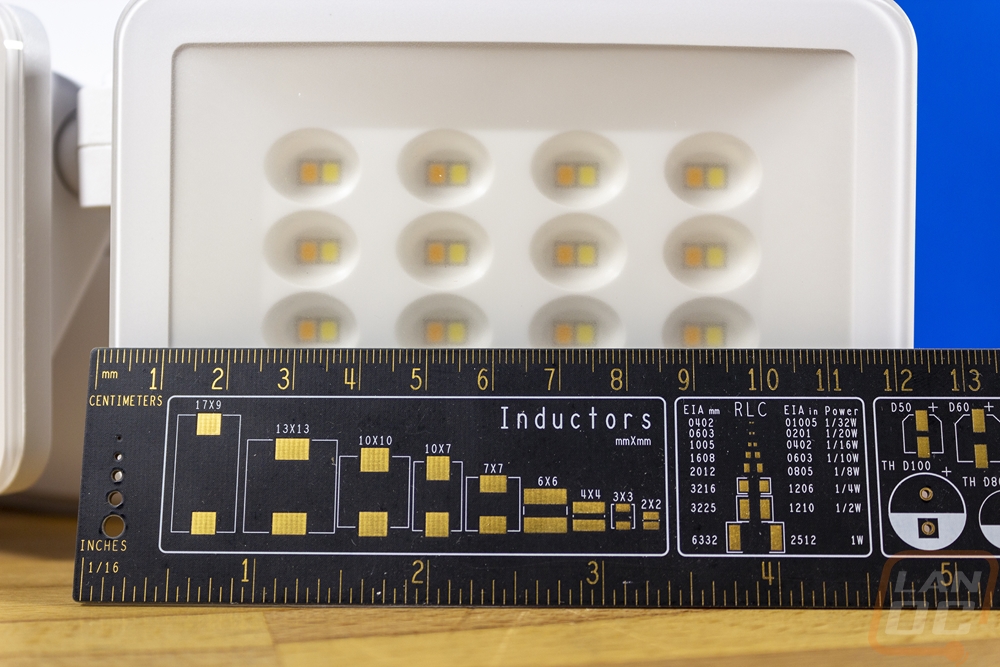 The triple floodlight portion does come with a lot of adjustability. Between the middle light and each of the outer lights, there is a knob that you can loosen up, and once loose that side will swing in the direction you need. That same mechanism allows the outer light to twist as well which controls how far down you want it to point. The middle light can’t be turned from side to side but can be angled down, you want to adjust this first though because it does also move the outer lights along with it. The back view of each of the lights shows they are thickest where the mounting is, being LEDs they don’t need much thickness for the rest of the light and this helps give room to tilt the lights down as well without them getting into the large housing in the middle of the Floodlight Cam 2 Pro. 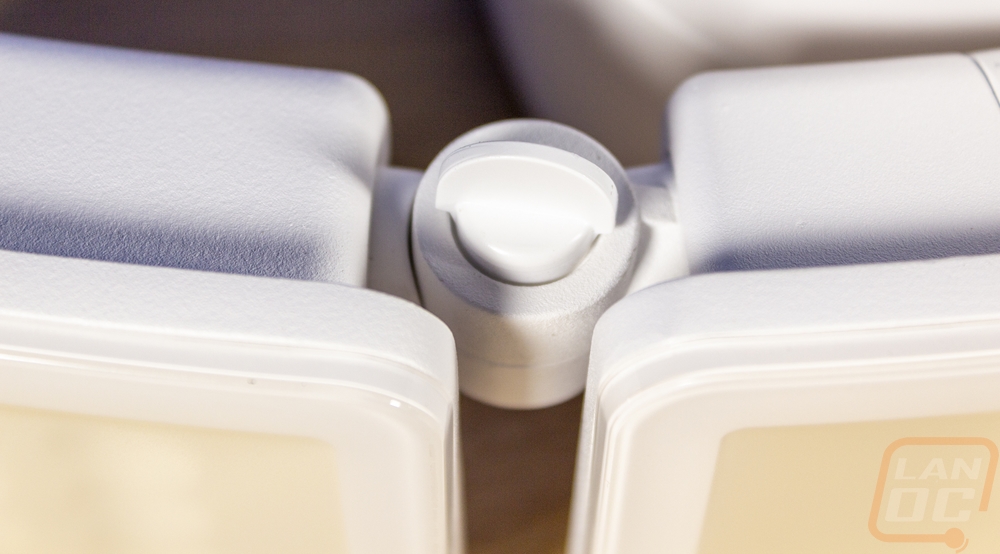 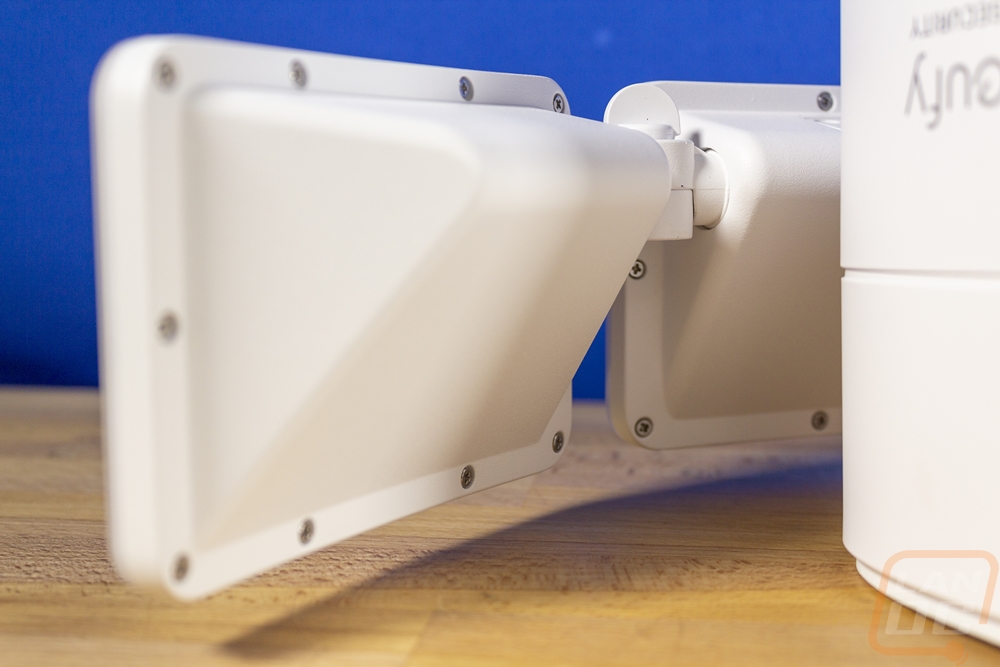 The back side of the Floodlight Cam 2 Pro which is where the wall or eve mounting mechanism pivots also hits two things. There is a small pinhole reset button for one and then they have a heavy-duty seal that covers up a micro-USB port and the sync button. Both of these are needed for setup. Once everything is installed, ideally these are up against the wall and hard or impossible to get to. 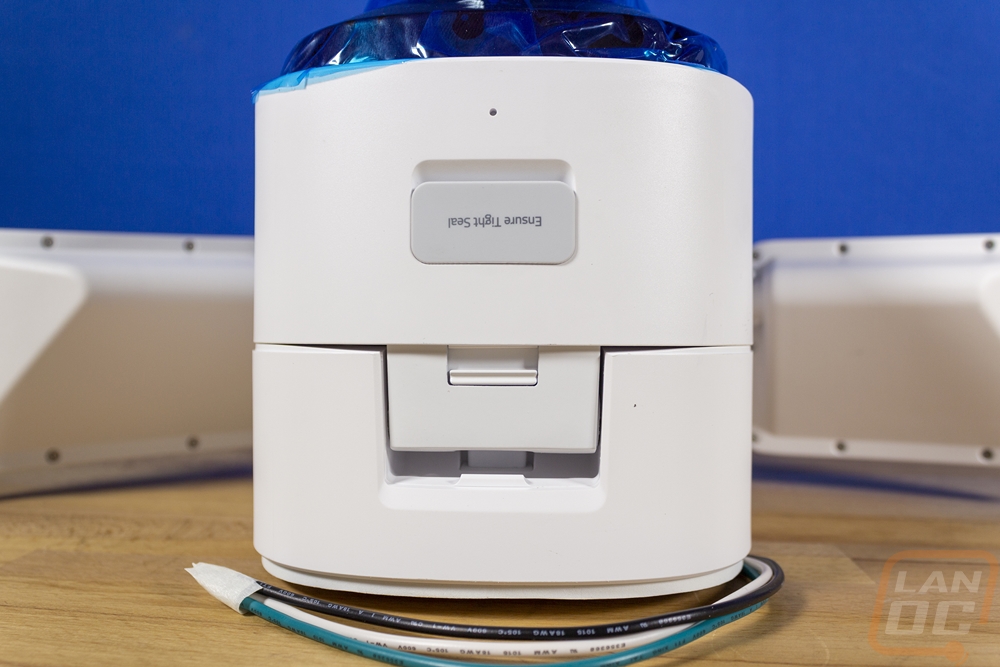 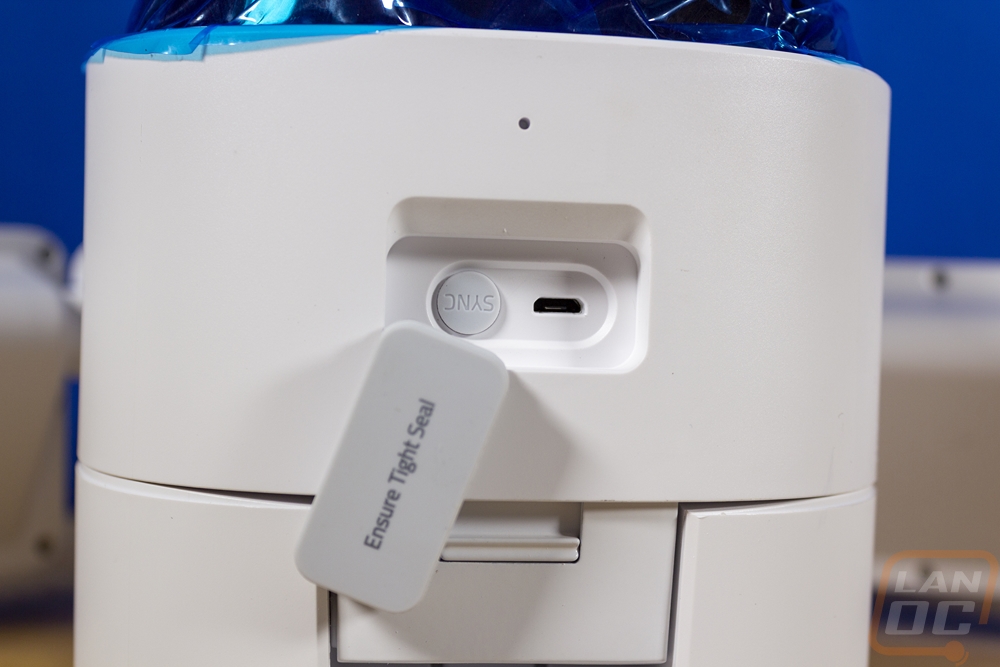 The biggest feature of the Floodlight Cam 2 Pro is the large plastic dome on the bottom of the floodlight. Every other floodlight camera on the market has a fixed camera attached to it which makes the Floodlight Cam 2 Pro unique by having a dome camera. Sensor-wise, this seems to be the same 2K resolution camera that is used in a lot of eufy products but it is set up on a gimble to be able to pan and tilt to aim the camera in any direction you might want to look, a full 360 degrees horizontally and 130 degrees for the vertical tilt. To go with this, in this area there are also three motion sensors and this is what has piqued my interest the most about this setup. The sensors are designed to face out three directions to turn the light on obviously but to also tell the camera when there is motion out of its view allowing it to turn and look in that direction. I’ve had a few pan tilt cameras in the past and that is a big limitation normally, they can only follow the movement that gets in front of the camera, with this setup in theory at least it can pick up movement out of view and get it in view. I will find out how that works for sure in testing. 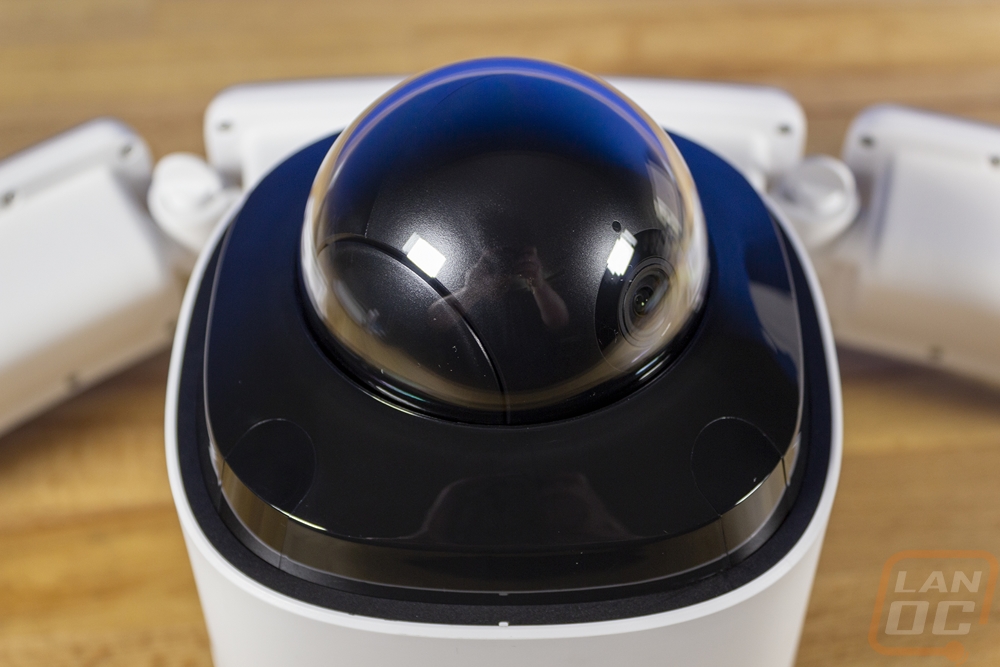 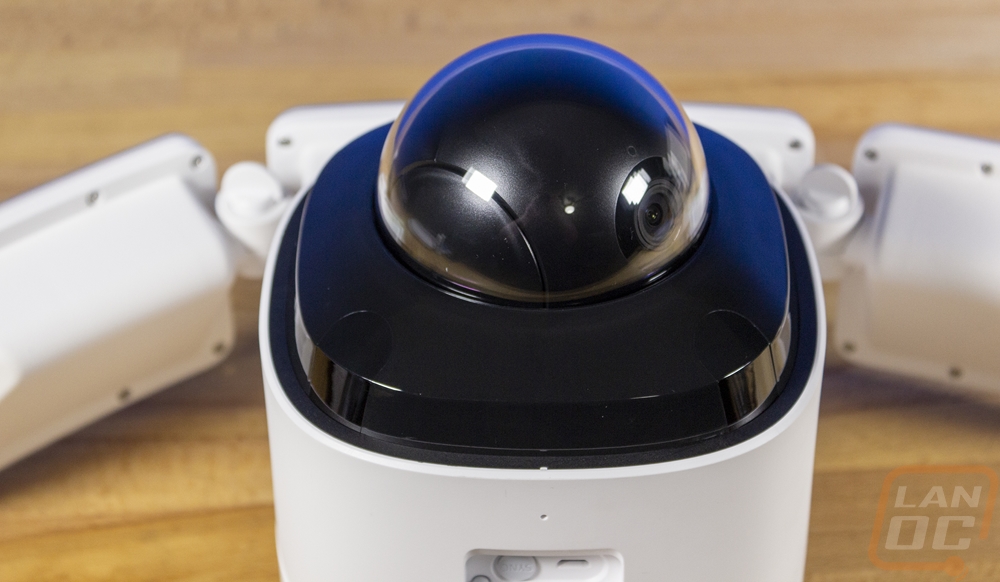