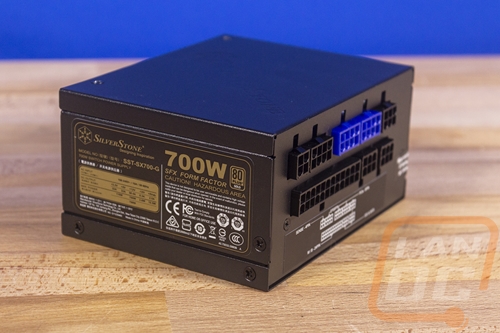 Silverstone is very consistent with a lot of their power supplies and the SX700-G isn’t really any different. The SX700-G is blacked out like normal and at first glance, it comes in their normal standard SFX casing which is all steel with a slightly textured finish. They make it very clear that this is an 80 Plus Gold product with even most of the writing on the side sticker being in gold along with the 80 Plus Gold logo being over on the right next to the wattage. I’ve never considered the Silverstone SFX power supplies to be the best looking, they are more simple and to the point and that is what the SX700-G does. It’s here to put out a lot of power in the smallest form factor possible. 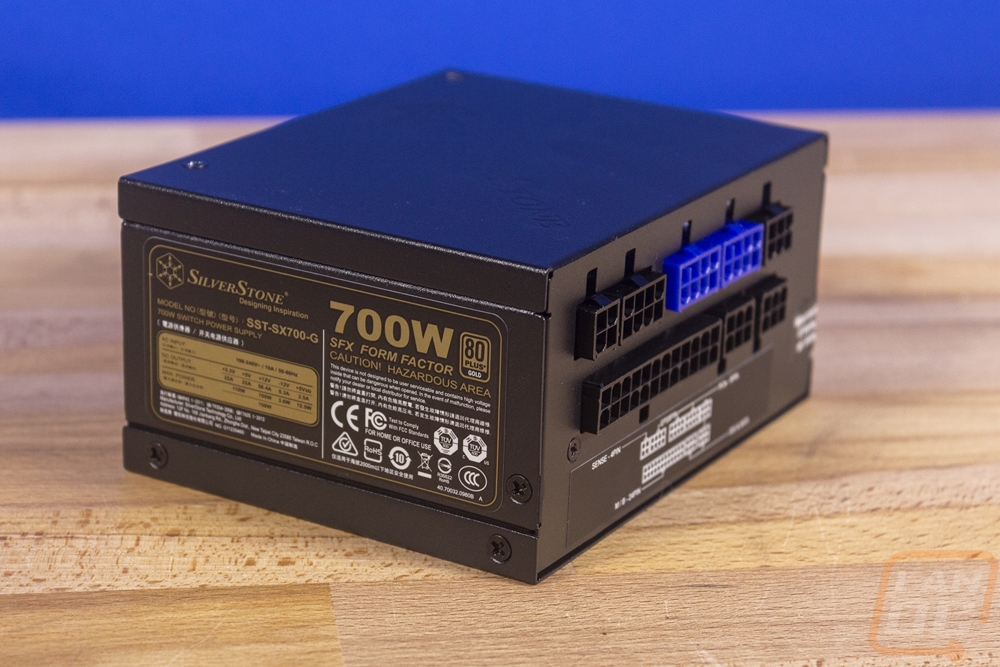 Like I said before, this is a traditional SFX power supply, not one of the SFX-L power supplies. Which is what makes the higher wattage more impressive, Silverstone has done higher in the SFX-L case but not in this one. It comes in at 5 inches wide, 4 inches deep, and 2 and a half inches thick. 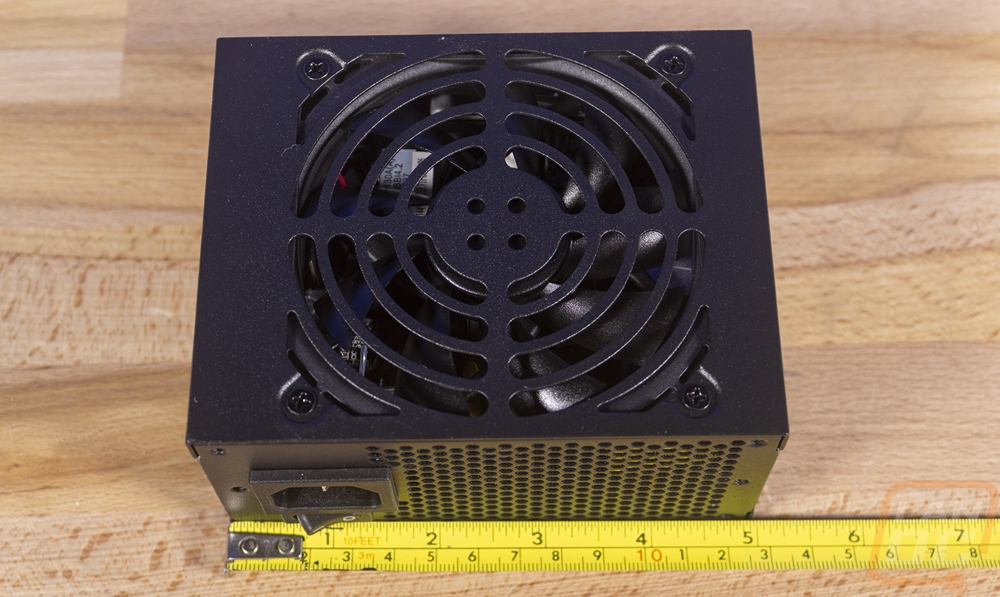 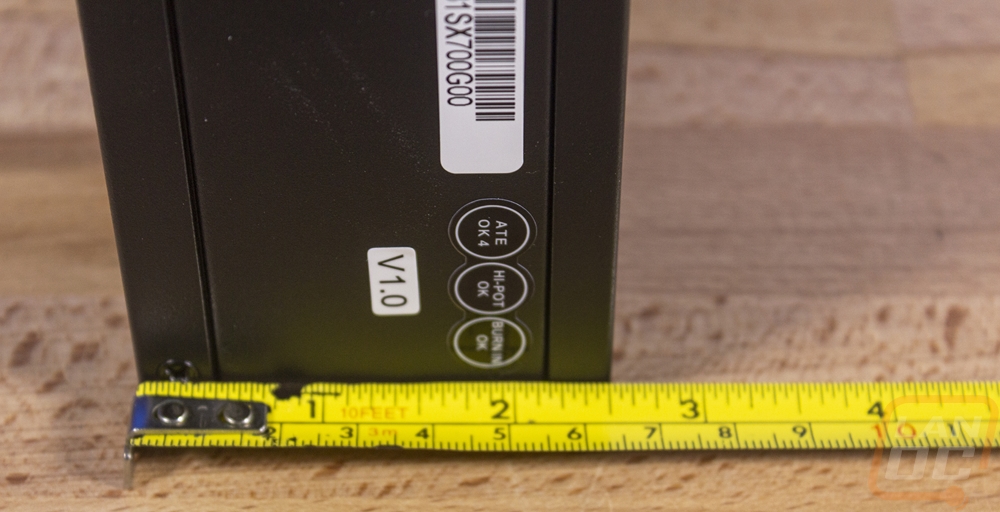 Starting on the business end so to speak, the SX700-G is a fully modular power supply which includes the 24-pin and EPS which sometimes companies will save money by hard wiring those two always needed cables. This makes it possible to get a full set of custom cables if you want/need them and in the small form factor market that becomes important a lot more than you would imagine. There just isn’t a lot of room in these builds for extra cables to be tucked away. Silverstone does include a sticker that has each plug type on it, I would prefer labels by each connection, I think it would look better as well. But this gets the job done. The two blue plugs are easy to spot, those are the PCIe plugs. Then the three 6-pin connections are all for the accessory cables like the Molex and SATA power. From there you have a full 24-pin connection and above that the Sense 4-pin, those role together. The Sense plug monitors voltages on the 24-pin. Then the last connection and the only black 8-pin is for the CPU power or EPS connection. All of the plus stick out a tiny bit, they aren’t recessed into the PSU case fully, but that makes getting at the retention clips a little easier as well.

The sides of the SX700-G don’t have too much going on. One side has nothing at all except a serial number bar code sticker and a few of the inspection stickers including one that indicates this is the V1.0 revision in case other revisions come out. The other side has that gold-trimmed sticker with the 700-watt branding in big letters and the 80 Plus Gold next to it. That side sticker shows the voltage and wattage break down and has the model name along with all of the normal required certification logos all packed into the bottom right corner. 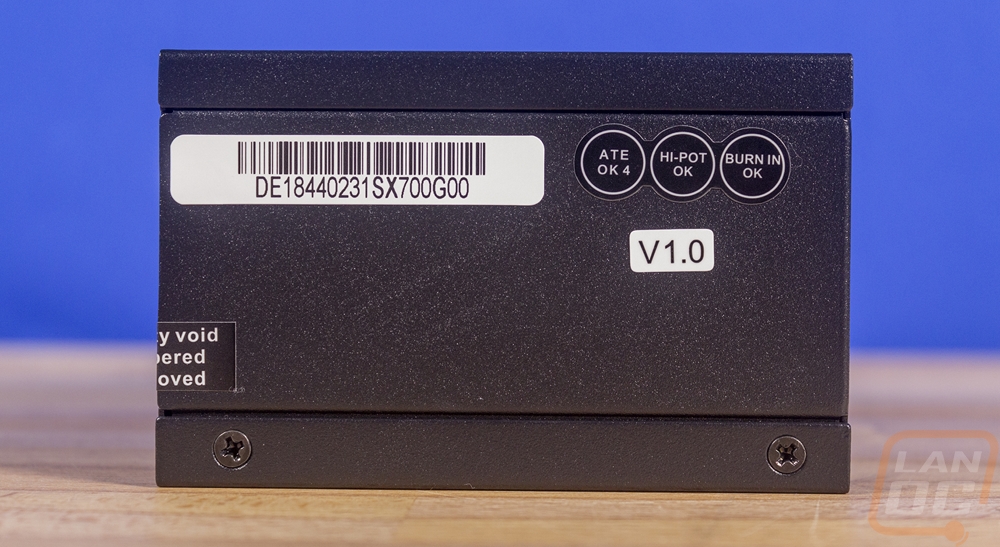 Then out back Silverstone did a good job of leaving as much of the back open with ventilation as possible and looking in you can see that they packed things in tightly with a cap right up near the vent even. This has six mounting holes, three per side for installation flipped in either direction depending on your case. Then you have the standard power supply cable plug and above that the power switch. That switch is a little different than what I’ve seen used in the past, it is about half the height as normal. Given the universal layout of the mounting holes, this is a good thing, a lot of times flipping an SFX power supply around can end up with a small bit of sheet metal pushing down on the power switch. This smaller switch shouldn’t have that problem. 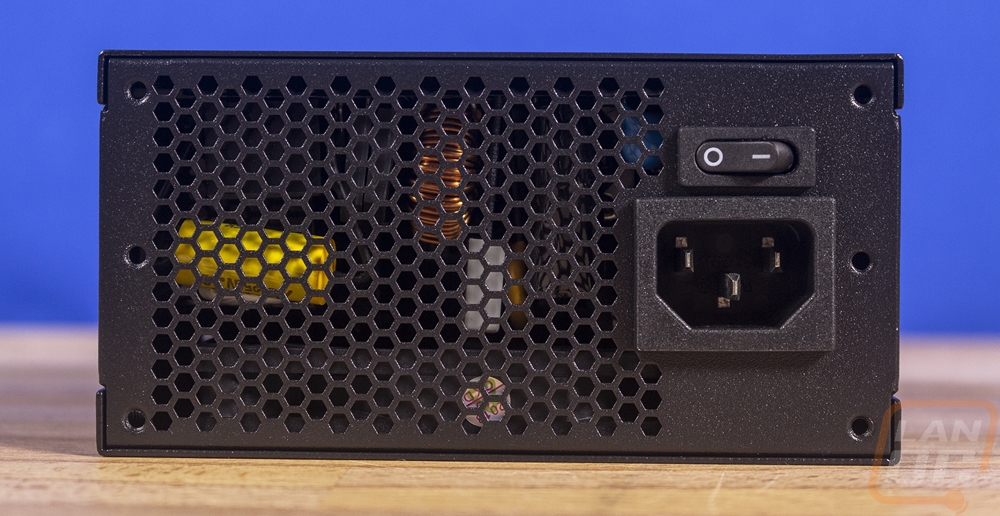 On the top and bottom panels, you have one side that is completely covered with just the Silverstone logo etched into it and barely visible with the textured finish. Then on the other side, you have the SX700-G’s main ventilation. You see, the SFX-L models can fit a full 120mm fan but the smaller normal SFX models don’t have room, Silverstone went with a 92mm fan here which is also black to match everything and the PSU sheet metal casing itself acts as the fan guard. This is a larger fan than Silverstone’s older standard SFX PSUs had for a fan which should help with fan noise. This fan does not turn off at low wattages, it is set to run at 1250 RPM from o watts up until 350 watts and then ramp up from there all the way to just under 3000 RPM when you reach 650 watts and 700 watts to keep the packed PSU cool. This is rated to run as low as 18 dBA at those lower speeds. 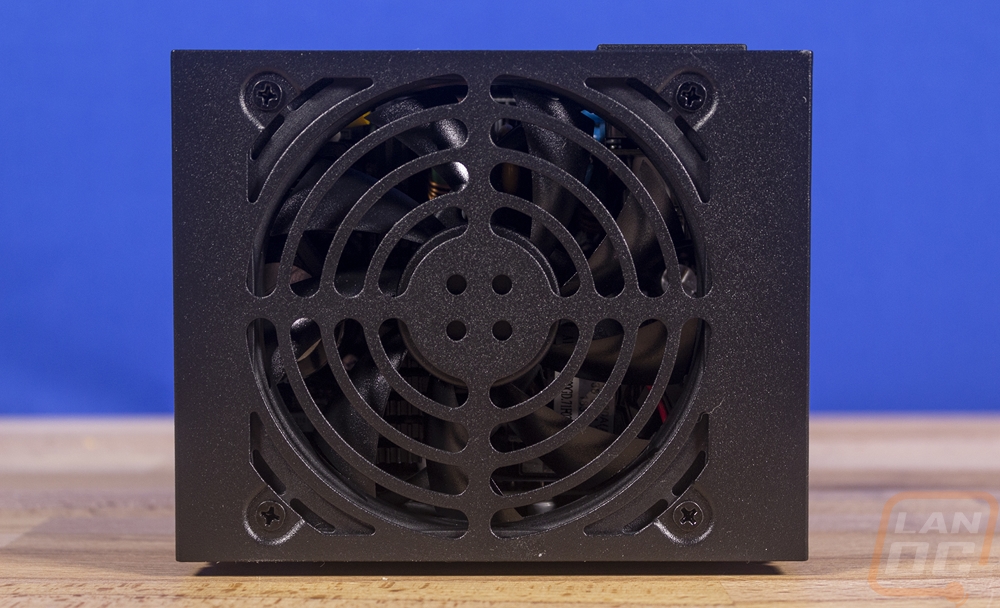 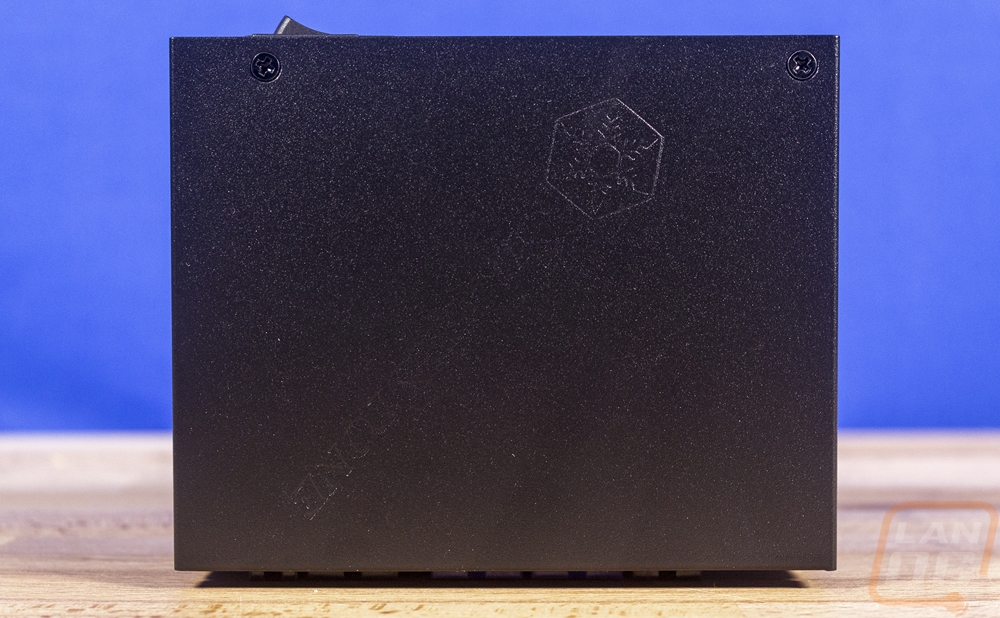 It might be an SFX power supply, but the SX700-G still gets you a big bundle of cables. The first two images have most of the standard cables. This includes the 24 pin motherboard power which is the shortest cable out of all of them. The 24-pin has a split cable with a 4-pin connection that goes to the PSU side. This is for the Sense 4 pin connection. It is how the SX700-G checks the voltage on the 24-pins connections to improve power quality. Below that is the 4+4 CPU power or if you prefer the EPS connection. It is 8-pin at the PSU but split on the motherboard side for some motherboards which only need a 4 pin. That cable is longer than the 24-pin by three inches but is 16 inches in total. Then the last two in those two pictures are both PCIe power cables for your video card. You can spot them because of the blue connector on the PSU end. One is 21 inches long and the other is 28 and both have dual 6+2-pin configurations so you can run two video cards off of the SX700-G or you have options for length depending on your case. The last two photos are all of the accessory cables. The top one is the Molex cable which comes in at 28 inches long and have three connections which are all spaced out by about 7 inches. The other two are matching and are both SATA power with three power connections but are unevenly spaced. Both are 25 inches long in total but the middle connection is 4 inches apart from the last and 8 apart from the first plug. All of the cables are all blacked out with the exception of the blue connections on the PCIe cables and are the thin flexible design that almost all PSUs use now that is easy to fit behind things and easy to fold up when cleaning up wiring. 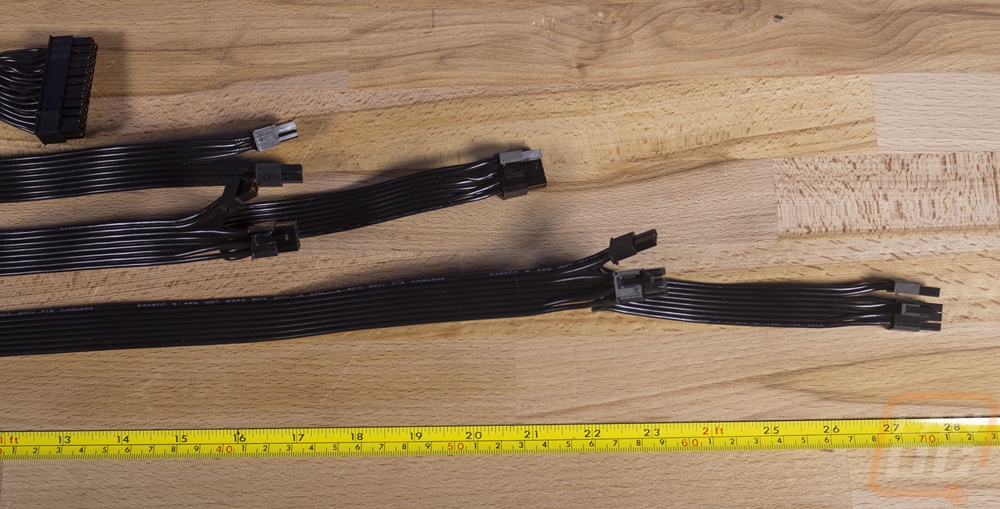 In addition to all of the modular cables, the SX700-G also comes with a Molex to Floppy adapter which has the same flat style cabling. You also get a standard power cable and a small baggy with four black screws for mounting the power supply as well. 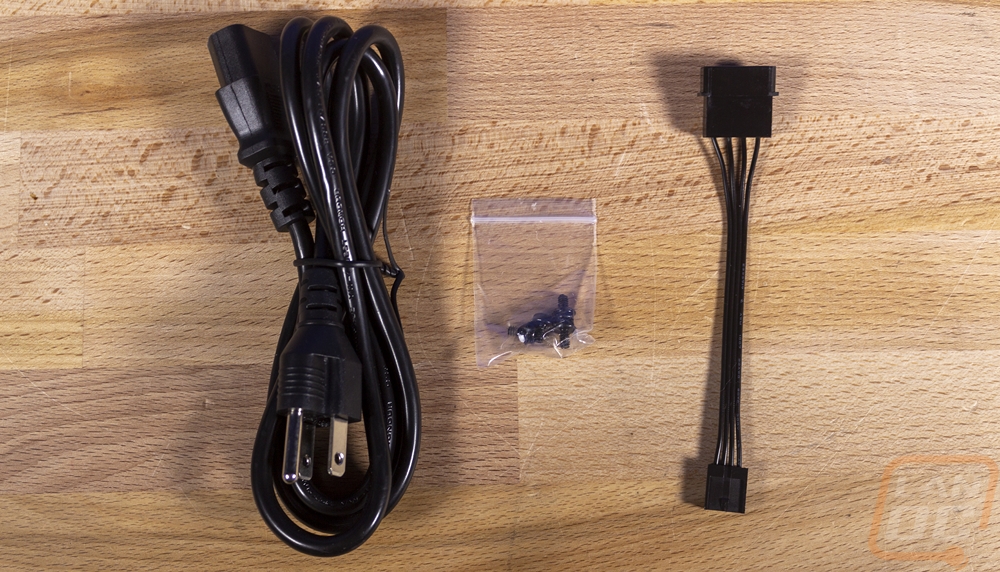