It's easy for us those of us that are PC enthusiasts to forget that not everyone has the inclination or know-how to build their own custom gaming computer. Most people just people just want to plug it in and play games, one of the reasons consoles do so well. But the current consoles are starting to show their age, which makes the PC more and more attractive. If you walk into the local brick and mortar, there's all kinds of computers, but none are all that good for gaming. This is where a good custom builder like CyberPower comes to the rescue. They sent along one of their "Back to School" builds to take a look at. Let see what they've got to offer

The CyberPower PC showed up in a big white box with their name on it. Packed inside was the box that the Coolermaster Elite 430 case came in and the box that the Gigabyte P55A-UD3 motherboard came in. Inside the motherboard box was all the manuals, driver disc, recovery disc, extra cables that came with the motherboard, power cord, invoice, and warranty sheet. The box containing the computer was like unboxing any other computer case you'd get, since they reused the packaging from the case manufacturer. 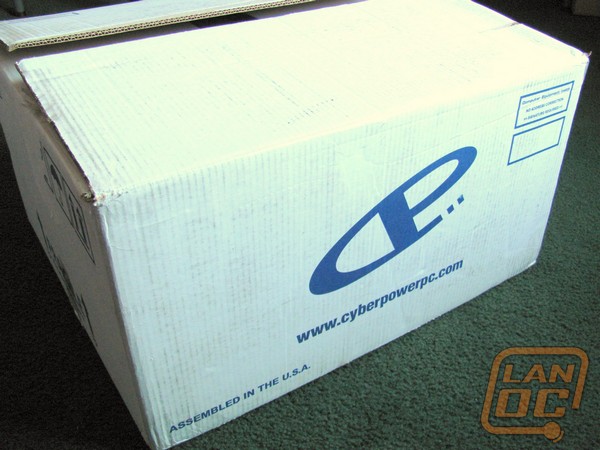 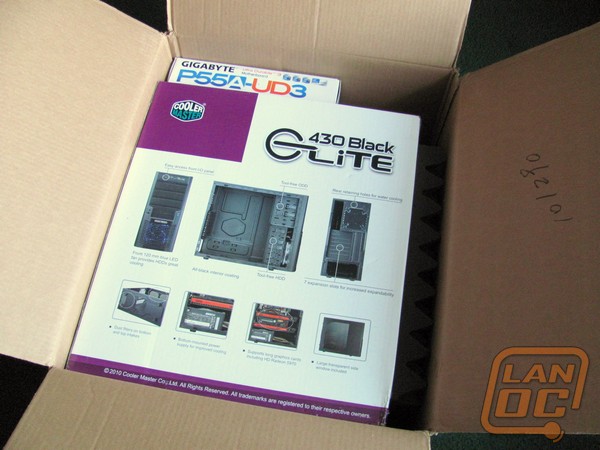 First of off, CyberPower chose to use the Coolermaster 430 Elite as the case. Having previously done the review of it, it's a decent choice. It's high quality with a lot of features. You would never know by looking at it that it's only $60. The only thing that's different from the one I have sitting here is the CyberPower logo on the window and the Windows 7 sticker in the corner, on the opposite side. You can, of course, choose from a wide varity of cases. You aren't stuck with this one. In my opinion, they made an odd choice for the fan that's mounted on the side window. In my review, I put a clear/lighted fan there instead. Clear matches what it's mounted to and blends in. That black on white fan looks goofy when compared. 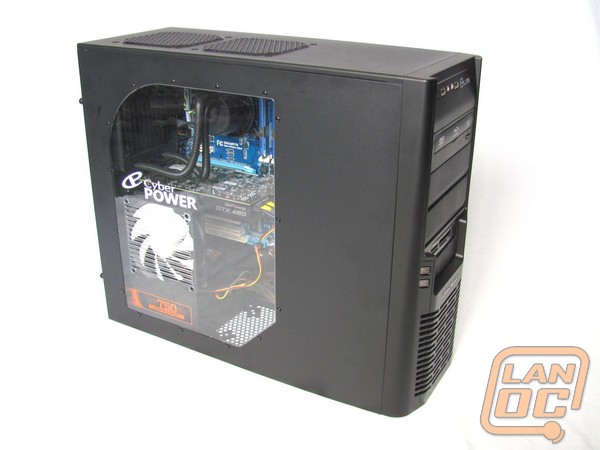 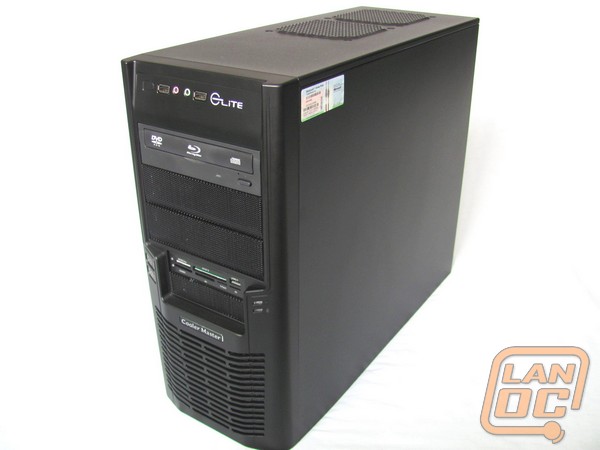 I'm not sure if this happened during shipping, but I tend to think not. With it being double boxed and both in good shape, I'm pretty sure that this was done when installing the fan. Someone must have forgotten to take their OCD meds that day and got a little overzealous with the screwdriver. If I was a paying customer, I wouldn't be too happy. Lucky for me I'm sending the whole thing back to them anyways. 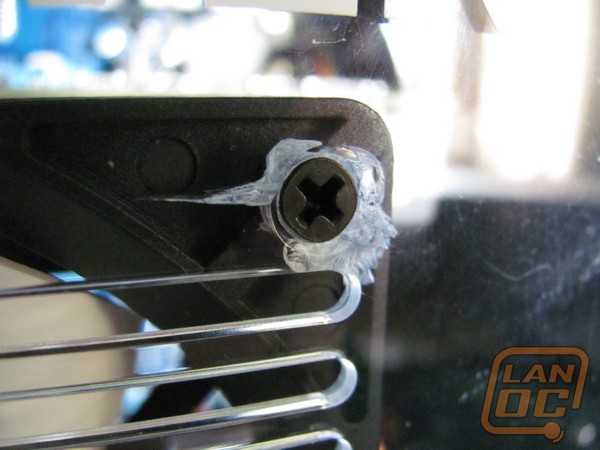 Upon taking the side panel off, we get an overall view of the internals. The first thing I noticed is the lack of air cooling on the CPU and in it's place the Acetek 510LC all-in-one water cooler. I do find it a little odd that they used a single fan pulling air through the radiator. It also has mounting holes for a fan on the other side. I wonder why they didn't go ahead and put one there instead or possibly use two, one on each side?

The other thing that stood out was the wiring. You can tell they're the kind of manufacture that takes some pride in the details. For the most part, they did a pretty good job. There's not much in the way of stray wires. I'm going to nit-pick here, so don't take this as too much of a negative against it. The wires coming off the power supply could use a couple zip ties to hold them together. The funny part is, this case includes a bundle of them. Why not use a couple? Another thing that bothers me are the wires coming off the graphics card that are routed across the top of the hard drive, right in front of the intake fan. I'm pretty sure the point of fancy wiring is to not block air flow. Oops. I know everyone does it different, but I like to mount the hard drive as low as possible. Not only is air blowing across the top of it, but it also make the case's airflow more open. By passing the air under the drive, you've created a tunnel that the air has to pass through before it can go up into the rest of the case. Once again, nit-picks on my part. 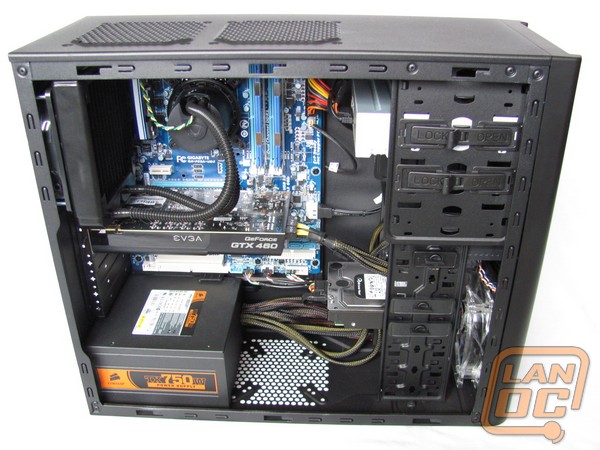 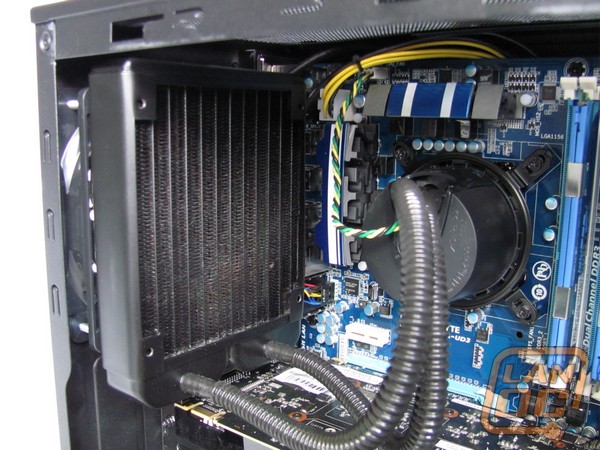 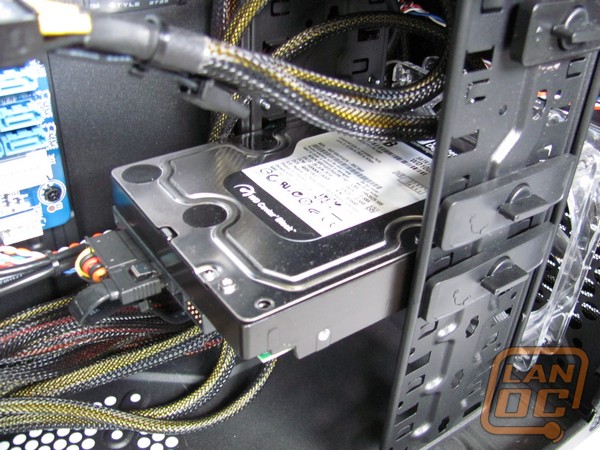 I'm definitely looking forward to testing out the GTX460 that CyberPower installed. This is the model with 1gb of ram. Not only does it have more memory than the one Garfi3ld recently reviewed, but it also has a 256bit memory bus. This give it 33% more memory bandwidth which is needed when playing games on larger screens with resolutions of 1920x1024 and above. This should make it a good amount faster.

Finishing off the list of excellent parts used is a Gigabyte P55A-UD3, a 1tb Caviar Black hard drive, a Corsair TX750w Power supply, and 4gb Kingston HyperX DDR3/1600 memory. You certainly can't go wrong with any of those. All of which I wouldn't hesitate buying for myself. CyberPower knows how to pick quality components for their computers. 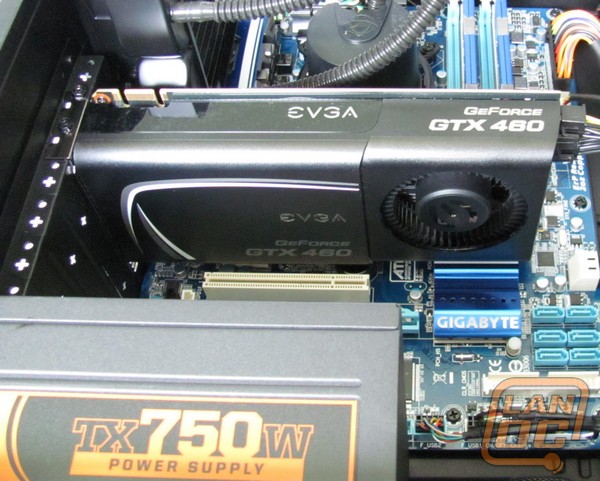 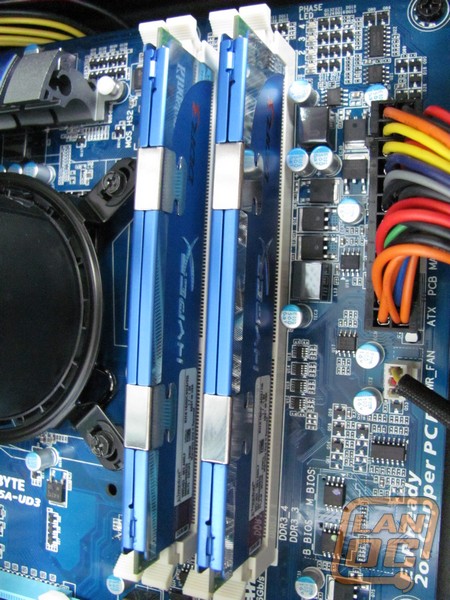 One of the great things that CyberPower does, is overclock the CPU for you. You can pay for a certain percentage of guaranteed overclock. Of course, the higher the overclock, the more it's gonna cost you. With this system, they overclocked a Core i5 760, which is supposed to run at 2.8ghz, up to 3.36ghz. This boost added $49 to the price of the PC. If you want to pay $99 they will overclock it to 3.64ghz. For me, the point of overclocking it is to see how much free speed I can get. Paying for someone to do it defeats the purpose a little. Just put the money into a better GPU, if you have it to burn. Then you'll have a faster graphics card and then you can see how much faster you can overclock the CPU yourself, for free. But that's just me. The average buyer may find this service more appealing because they are guaranteed that speed and won't have to fiddle with it. Not to mention its all covered under the warranty. 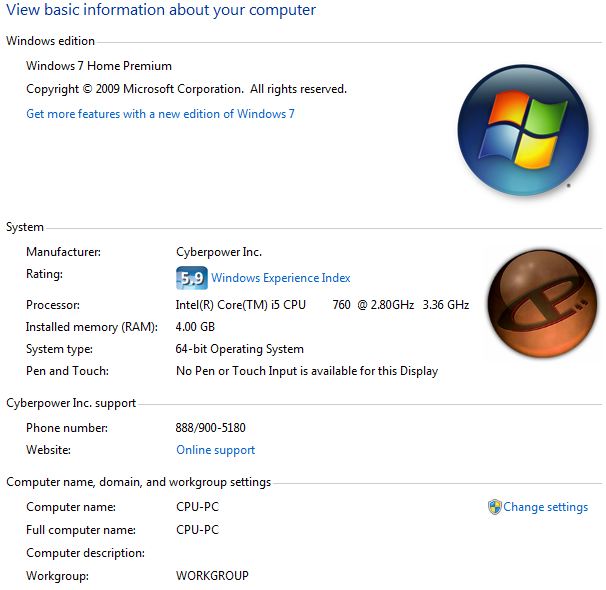 Since I also received two heatsinks to review at the same time I had this PC, I was able to use the CyberPower PC as a test bed. If this wouldn't have been the case, I might not have even noticed a problem. When testing, I use OCCT to show how hot the CPU gets with a particular heatsink. After testing, reapplying the block, and testing again, the results were the same. As configured, the cooling system they've installed is bad...really bad. 69°c at load is totally unacceptable when a nice air cooler like the ones listed in the chart below are 9 to 10 degrees cooler and more than likely cheaper. I suggest when you get around to configuring a new computer from them, you pick a nice dependable heatsink instead of the Asetek ones they've got listed. And no worries, Cyberpower has a full selection to pick from. 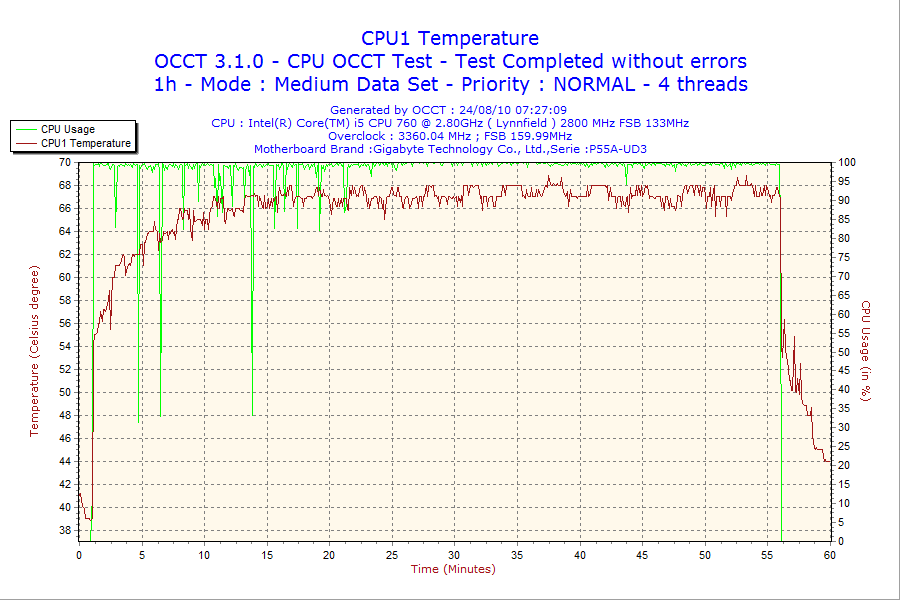 One thing you don't get when building your own computer is the piece of mind that you get with a 1 year parts and 3 year labor, system wide warranty. If something goes wrong, you don't have to be your own tech support. They'll take care of it, instead of you pulling your hair out trying to figure out what is wrong. Another drawback of building your own computer is the possibility of getting parts that don't work with each other. How many times have you heard reports of certain brands of memory not working with certain motherboards? I've never had that happen to me yet, but it could. When it does, I'm not going to be a happy camper when I have to send back memory and wait for a different set to show up.

Another difference between big box computers and custom builds, like I have here, is crapware, or lack there-of. Absent is all the trial and time-limited installs of stuff you don't need and have to remove later. Nagging you over and over to buy them, until you do. On the otherhand, software that you think should be installed in a computer that includes a Blu-Ray drive, is absent as well. When I inserted a Blu-Ray disc, nothing happened. At least they could have installed the basic version of the playback software that usually is included for free when you buy a Blu-Ray drive separately. That being said, I'd gladly take the system with a basic Windows install, over the loaded-up one any day.

To test performance, I ran 3dmark Vantage, Battlefield: Bad Company 2, and Dirt 2. All were run at 1920x1200 with the settings at their highest. Antialiasing was set at 4x and Anisotropic filtering at 8x, results are the average fps. 3d Mark Vantage and Dirt 2 are automated benchmarks. But with Battlefield, this meant I had an excuse to play it for a while and get a hands-on test. I set fraps to benchmark for 5 minutes and played on the Laguna Presa map. I did this several times to make sure that the score I got wasn't a fluke. Right off the bat, I was amazed on how smooth it ran. I was smokin' enemies left and right. It was like taking candy from a baby, with this computer. Of course this computer won't make you anymore skilled. But it is fast enough not get in your way either. Everything about this build says quality. Every part, except for the cooler, is top notch hardware. Most of which I would choose if I were building a computer in this price range. I would have liked to have seen software for the playing of blu-ray discs installed on the computer, but the lack of crapware that's installed on the system, like you'd get with other PCs, is a trade-off I'm willing to take. If you want a nice custom overclocked PC like the enthusiasts have, but don't want the hastle of building it yourself, a CyberPower PC is a good way to go. With a price as configured just under $1150, this particular setup is a value compared to over boutique builds. 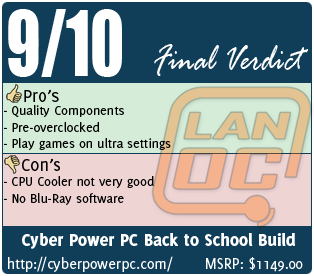 You might call him obsessed or just a hardcore geek. Wes's obsession with gaming hardware and gadgets isn't anything new, he could be found taking things apart even as a child. When not poking around in PC's he can be found playing League of Legends, Awesomenauts, or Civilization 5 or watching a wide variety of TV shows and Movies. A car guy at heart, the same things that draw him into tweaking cars apply when building good looking fast computers. If you are interested in writing for Wes here at LanOC you can reach out to him directly using our contact form.
Discuss this article
Log in to comment
Posts in discussion: Cyber Power PC - Back to School P55 Configurator