As PC enthusiasts, we tend to gravitate toward bigger and better, but not everyone needs a huge case with all sorts of fancy features and accessories. Sometimes small and simple is better. Let's say your mom finally decides to take you up on your offer to build her a new computer. Do you think she really cares if there's a fan controller or connections for water cooling? Mom just wants to turn it on and get her email. This is where the Cooler Master 430 Elite comes in. 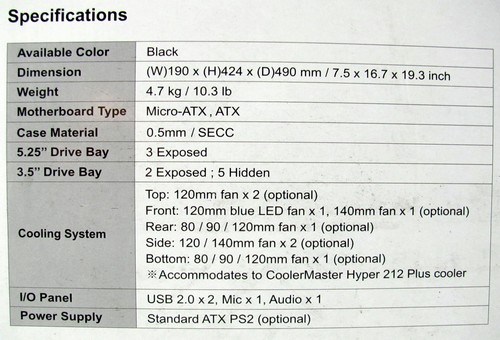 Personally, I don't find anything interesting about how a piece of hardware is packaged. Consequently, I find it hard to come up with much to say about the subject. It gets torn off and thrown away like the wrapping paper on Christmas presents. As long as my toy inside is in one piece, I'm happy. Never-the-less, here's some pics the stuff before it hits the landfill. 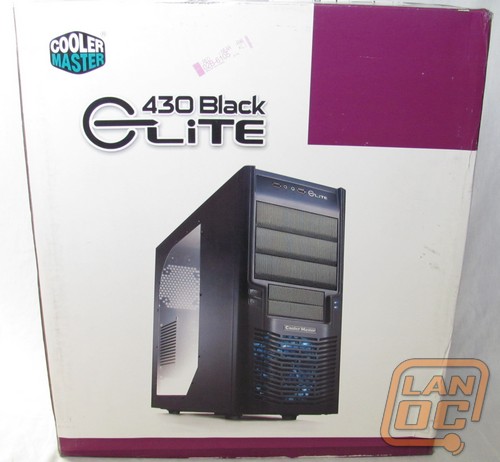 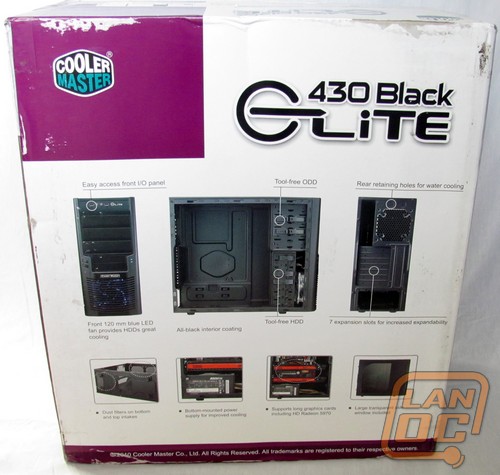 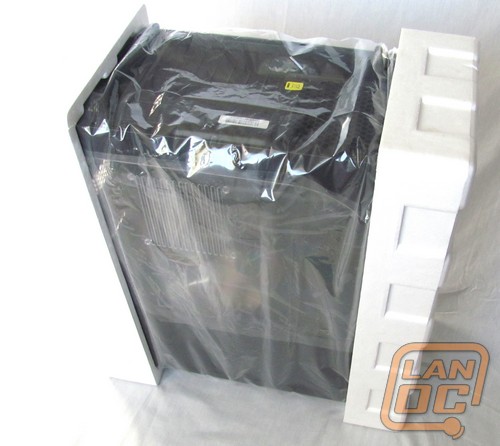 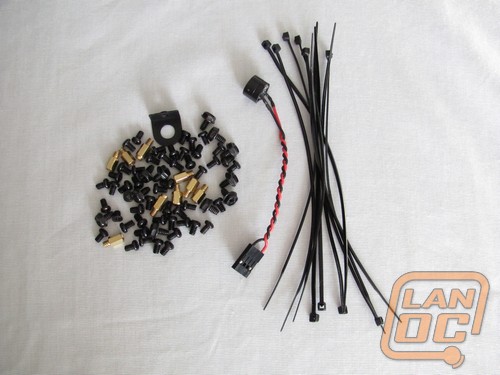 Now that I've removed that pesky stuff between me and my new toy, let's take a look at it. I can tell by the small size of the case and the exclusion of fans, that this is a low-cost case. Low cost doesn't necessarily mean it's cheap though. It feels like it could take a pretty good beating in the trunk of your car, getting to the LAN party. I can see this one lasting for year and years. 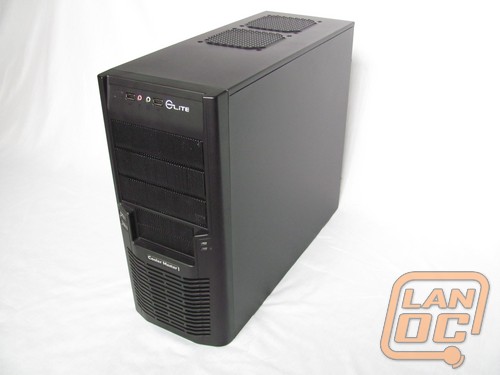 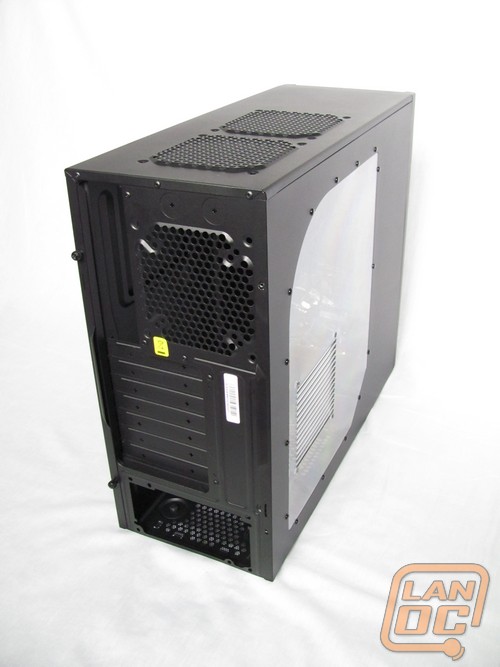 I've never understood why a case would come with a see-through side panel and not have the interior painted. It looks so tacky. Not with the Cooler Master 430 Elite. The first thing you notice is how good interior paint job looks. On the flip side, it only comes with one 120mm blue LED fan, but up to five more can be added; Two on the top, one on the back, one on the bottom, and one on the side. It also comes with five tool-less drive locks. Two for optical drives, two for hard drives and one for a memory card reader. You thought I was going to say floppy drive, didn't you? Another notable addition is the CPU cut-out on the motherboard panel. This is something that is often overlooked. With a case this small, you don't want to have to remove a motherboard from it, unless it's completely necessary. 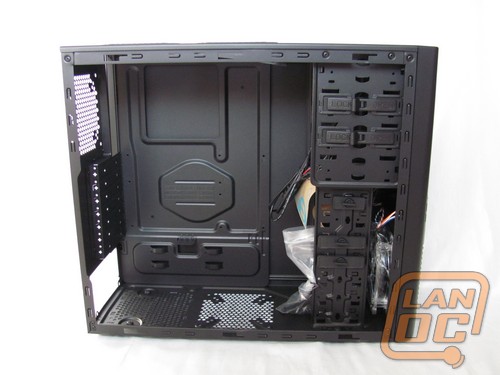 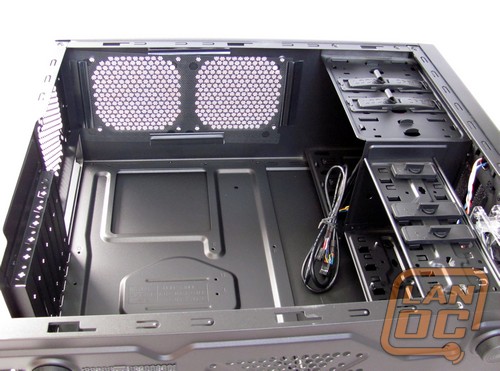 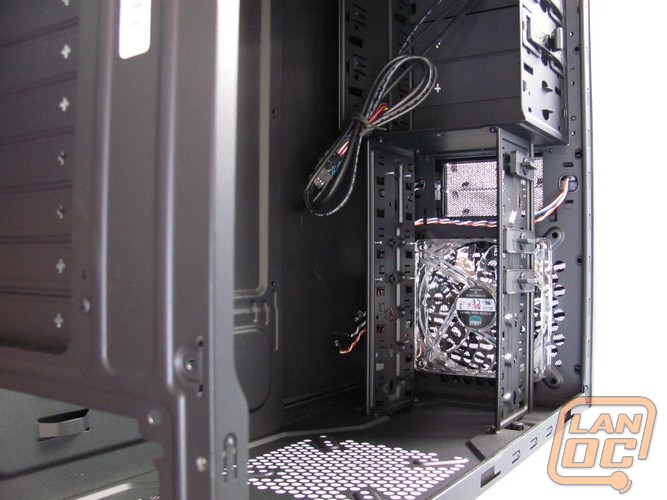 I volunteered my daughter's computer for this review. The case it was in was from the old days where they mounted fans inside the front near the bottom, but didn't put a way for the air to get in from the outside. I had to mod it to high heaven to get any worthwhile airflow. I figured the Cooler Master 430 Elite was a perfect upgrade for her modest PC. Since the 430 Elite only comes with one fan, which blows across the hard drives, I took the liberty of adding a couple of my own. There is one problem though. The motherboard is mounted almost up against the top, without leaving room for the fans you might put there. This means that any fan you put in the top spots are going to overhang the motherboard. It was impossible to put a fan above the CPU, with this heatsink on it. I was able to get a fan on the other one, but it's almost up against the clips that hold the memory in. If there's ever a need to swap out the memory, the fan is going to have to be removed before it can be done. Another thing, I thought top fans were supposed to blow air out, not in. Why would they put a fan filter there, hot air rises right? You don't need to filter air that's leaving the case, only the air that's coming in. Once I took it off, I realized that the filter clips get in the way of the fan installation. Luckily they are just glued on, so I tore them off too. The funny part is, there's no filter on the bottom, next to the power supply, where you would need one. Speaking of the power supply, they give you the option of mounting it in whatever orientation you want. Since this is a cheap power supply and only has a fan on the back, I mounted it so the wires were near the back panel, for better aesthetics. 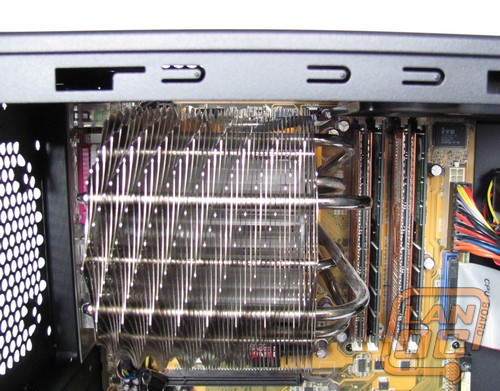 Another complaint I have, is the poor quality of the machining on some of the screw holes. When putting the motherboard stand-offs in, some of them wouldn't screw in by hand. I had to get a pair of pliers to turn them. Once I got the motherboard mounted and was ready to install the graphics and network cards, I came across this suckish cost-cutting trick. The card slots on the back aren't easily removed. They're the kind where you have to stick a screw driver in a notch and bend it back and forth until it breaks off. You have to be careful not be too rough with it, because every time you twist it, it hits the motherboard. Once you do get it off, you no longer have the option of covering that hole back up, should you ever need to, unless you use slot covers from another computer. 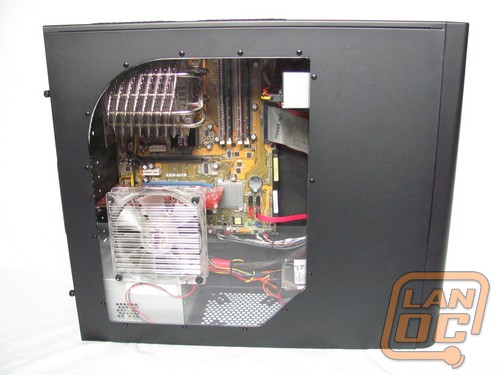 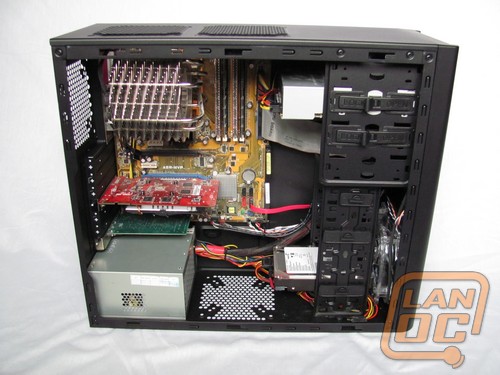 Since the case this computer came out of was beige, The DVD drive sticks out like a sore thumb. Looking past that, I think it looks pretty good. There's something to be said for simplicity. I would liked to have seen the power button a little larger than the reset button though. My daughter likes to go to bed and leave her computer on. When I head to bed, I'll walk by and double tap the power button. In the dark they both feel the same, so I have to pray I don't hit the reset button by mistake. I don't need a corrupt system file from an improper shut-down, because I hit the wrong button. It's hard to tell from this picture, but the power-on light is BRIGHT. This motherboard blinks that light when it's in sleep mode. Not good if you're also trying to get to sleep mode. 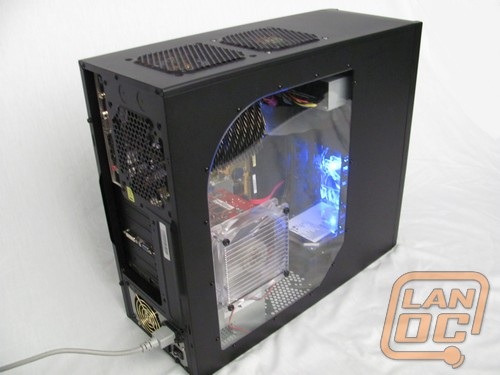 Conclusion
Installation was a bear. Other than the tool-less drive locks, it was a fight the whole way through, to get everything in. I would have scored it a 7 out of 10, but I added a point because of the low price. For the MSRP of $59.99, I can put up with an awful lot. Since this isn't meant to be an enthusiast's case, you aren't going to be opening it back up to swap parts, anyways. So the install will just be a fading memory. What you'll be left with is a very nice looking case that will last you for years and years. On the other hand, since it is so small and looks this good, it might even make for a good LAN rig. Don't expect miracles, but after you add a couple of your own fans, you'll get nearly the performance of the much larger, more expensive cases. If anyone I know asks me to build them a computer on a tight budget, I'm going to be recommending this case. 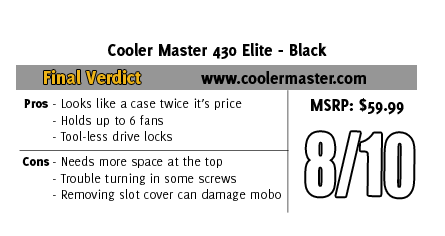 We have 1428 guests and one member online