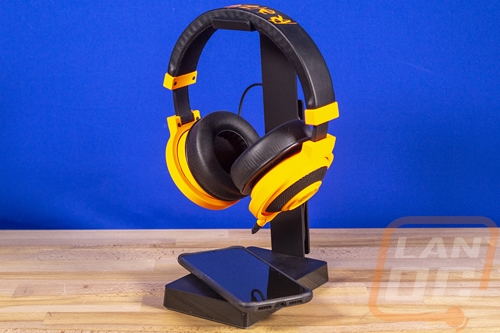 Performance and Overall and Final Verdict

So normally I would break the performance testing down into its own section as well as our final verdict but this is a headphone stand, even with a lot of extra features it is still relatively simple. For testing, I had to make room on my desk because it’s a mess right now and get it powered up and hooked up to USB. With all of that done I downloaded the software and plugged in a headset and went on my way. Frankly, when it comes to the headset stand portion of things there isn’t much too it. It did a good job of holding all of the headsets I tried on it. I like that it is thinner so with my suspension based headphones I could slide it in between the headband and the top to keep from stretching the headband out. It also worked well with normal headsets as well and my concerns about not having a back lip weren’t an issue at all. The rubber kept them all in place. 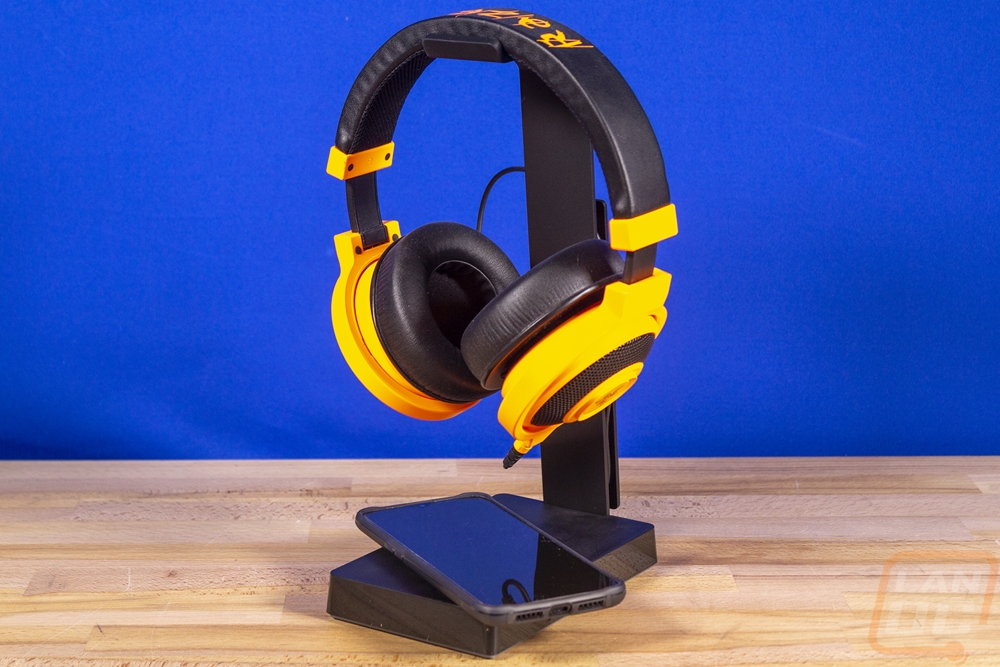 The wireless charging for me was the most interesting feature and I didn’t waste any time in trying it out. The Samsung S10 I tested with it picked up the base right away and started charging. The phone didn’t have to be dead center or anything to work and as someone who seems to be always charging a phone I love having wireless charging right on my desk. Combining it into another device that I’m also using just makes sense. Plus it means one less device on your desk. 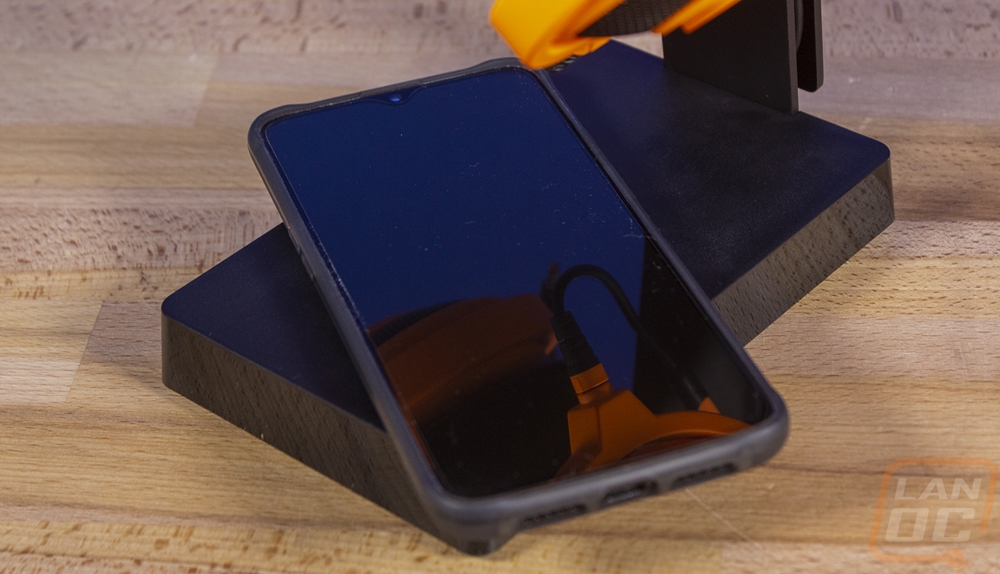 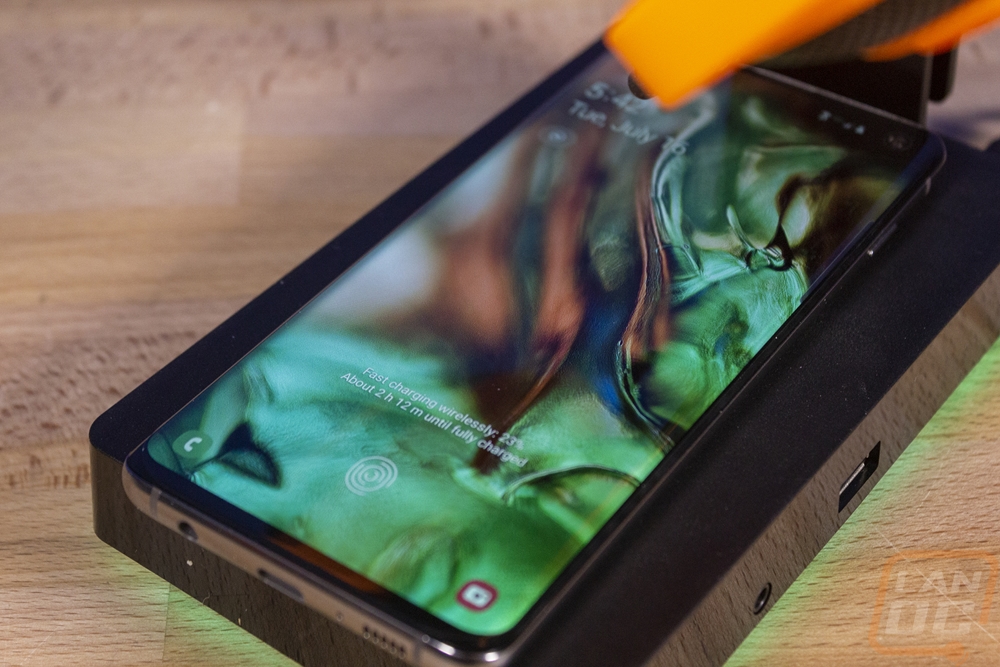 Now the built-in sound card for me was a lot less needed but I can really see how a lot of people would like this. I already run a DAC right on my desk, but if you don’t getting a simple plug right at your desk is extremely helpful. Like I said before I wish it had microphone and headphone jacks split up, but there is a convenience still there. Audio performance wasn’t bad, it was about what you would expect from an included USB sound card with a headset. They also provide a relatively good EQ in the software as well. I will say though that by default it was a little boomy with bass, but a lot of people will like that. Having the option to tweak things means that isn’t an issue at all. You also have the ability to fully adjust the 7.1 surround sound as well and frankly, I don’t care much for simulated surround sound so I turned this off as soon as I could say I tested it enough. Now they did a fine job on it, it just isn’t something I prefer at all. 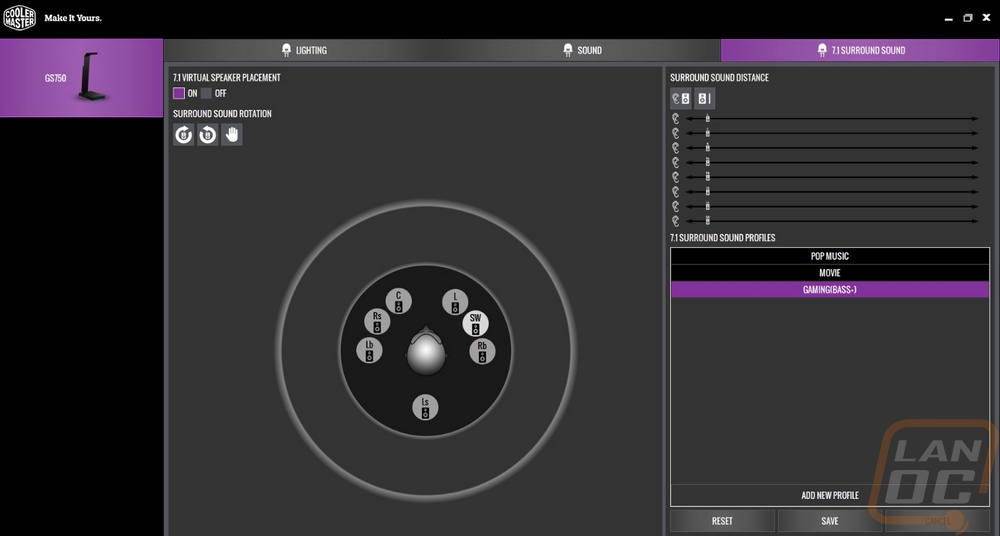 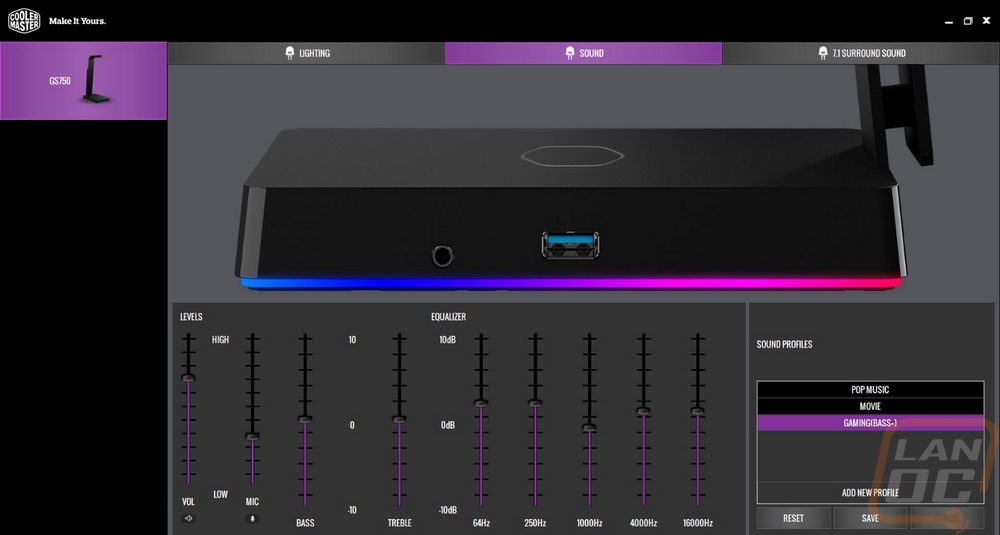 The other big feature is the RGB lighting and its funny because this actually works even if you don’t bother to hook up the USB at all. The wireless charging does too as well if you are only interested in that. But much like Corsair and Razer with their headphone stands, the GS750 does has a glowing ring around the bottom. It has 13 LEDs in total and you can control the lighting using the software with a few lighting modes or by setting a static color to match your setup. 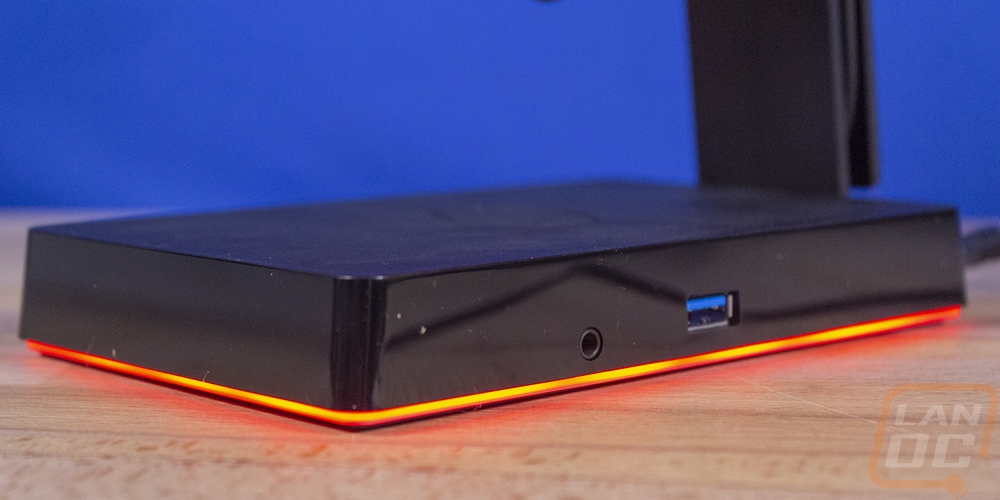 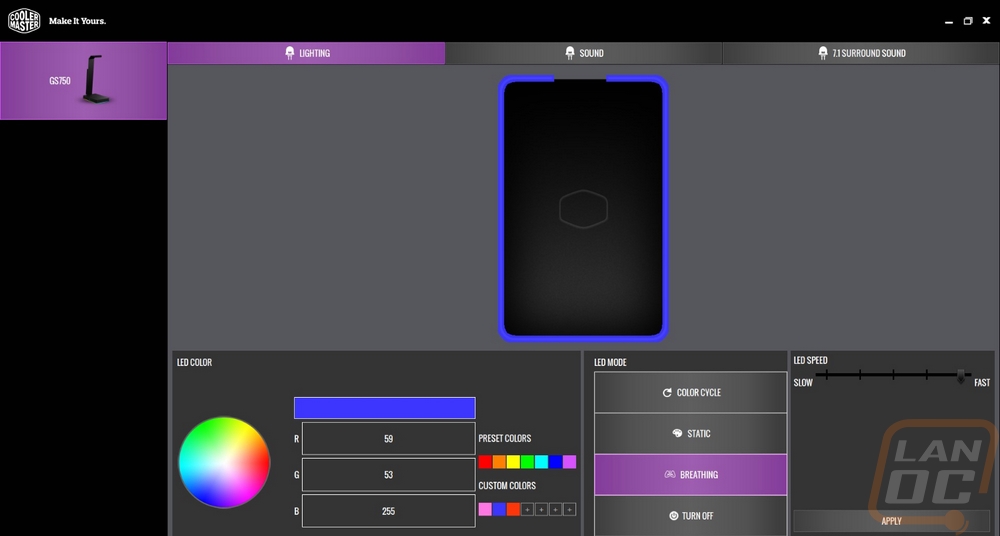 So what do I think of the GS750? Well, my first impression was with the styling and frankly, I think the GS750 has none at all. Both the Corsair ST100 and Razer Base Station Chroma are targeting this same market and they both at least look good. The GS750 kind of looks like they packed as many features into it and put a plastic cover over it and sent it. Those features, however, are what make this a good product. Neither of the competing products has included Qi wireless charging and that is my favorite feature. The USB hub and built-in sound card kind of do the same thing for me. They give you options right on your desk to plug different devices in without having to get back behind your PC. More importantly, they both are tucked away inside of something that I would use anyhow, a headphone stand. Which by the way worked very well, especially with the rubber up top keeping headphones and headsets from moving around. The RGB lighting is also nice, but it feels like they are just repeating what Corsair and Razer have done. I do think going with just a single headphone jack as a combo microphone and headphone jack is a little disappointing considering PCs always use two. But this isn’t really any different than Corsair who did the same thing. I would also prefer to see the data cable connection be Type-C just for simple use and to give a quick charging option when needed for phones that don’t have wireless charging.

It’s the Qi wireless charger that makes the GS750 stand out, the Corsair and Razer options both have RGB lighting and USB charging. Corsair also has a built-in 7.1 sound card as well. But Cooler Master has theirs priced $20 more with an MSRP of $79.99. Is that expensive? I think it is and that $20 could get you a wireless charger. That said you are getting everything combined. Personally, I think if the price came down this could be a nice gift or pickup to clean up your desk. It isn’t perfect however but would still recommend it assuming you needed all of the features. I would keep it on my desk as well but in my case I don’t actually have the space on my desk without blocking a monitor and I already have everything except the wireless charger setup, but this might be a nice upgrade for my wife’s headphone stand and I know she would love the wireless charger and extra USB ports being within reach. 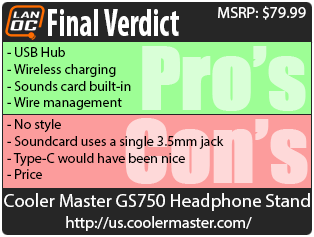 You might call him obsessed or just a hardcore geek. Wes's obsession with gaming hardware and gadgets isn't anything new, he could be found taking things apart even as a child. When not poking around in PC's he can be found playing League of Legends, Awesomenauts, or Civilization 5 or watching a wide variety of TV shows and Movies. A car guy at heart, the same things that draw him into tweaking cars apply when building good looking fast computers. If you are interested in writing for Wes here at LanOC you can reach out to him directly using our contact form.
Discuss this article
Log in to comment
Posts in discussion: Cooler Master GS750 Headphone Stand

We have 846 guests and one member online