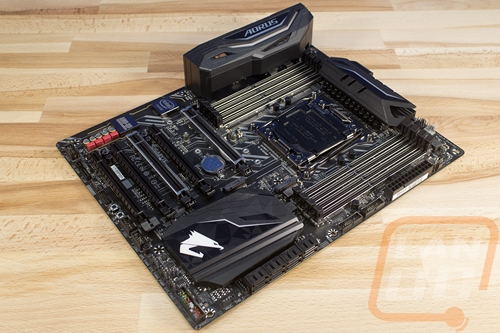 For performance testing, most of our tests are really just to check to make sure everything is in line similar boards. The CPU, Memory, and video card control most of the scores. But sometimes I will find big variances and can spot issues with these tests. So if we flip through the main tests we can see the X299 Aorus Gaming 3 performs really well when paired with the 7900X and a GTX 1080 Ti. Our 3dmark results did have a bit of a bump on the physics score that indicates CPU performance but the overall was close enough. In game performance was good, in fact, a touch faster than the Asus Prime Deluxe. The fact our X299 test platform had an SSD die when setting the Gaming 3 up could have played a role in a little better performance as well, with a slightly faster drive in place temporarily.

I also took a look at network performance by using Passmark Performance Test 9’s advanced network test tool, using another PC in the office as a server and testing the transfer speeds. The built-in Intel NIC on the X299 Gaming 3 performed well here, putting it up in line with the I211-AT on the Asus Prime Deluxe.