MSI Z270 SLI PLUS - Board Layout and Pictures 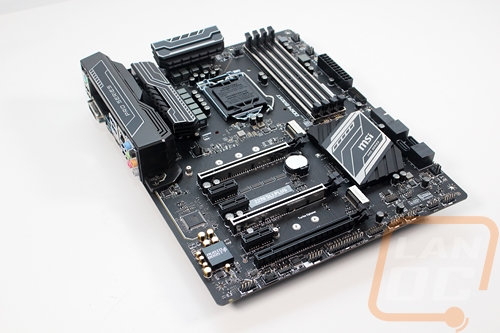 The Z270 SLI Plus may have a lot of the same features as the gaming boards, but the board is a little simpler looking with its all blacked out look. It has a flat black PCB and black for all of the accents like the DIMMs and PCI slots. Even the three heatsinks have a flat black look with just a silver trim over them. Speaking of the heatsinks, the SLI Plus has about the same cooling configuration that you would see on a higher end board with the large flat chipset cooler down next to the PCI slots and the two thicker heatsinks to the left and above the CPU to cool the chokes. Then to really keep things looking good they also put a black cover over the real I/O panel with the Pro Series branding on it. All in all, it reminds me a lot of the X99 Deluxe board from Asus but with less white, MSI has clued in that not everyone who wants a good board needs or wants a red and black themed “gaming” board. 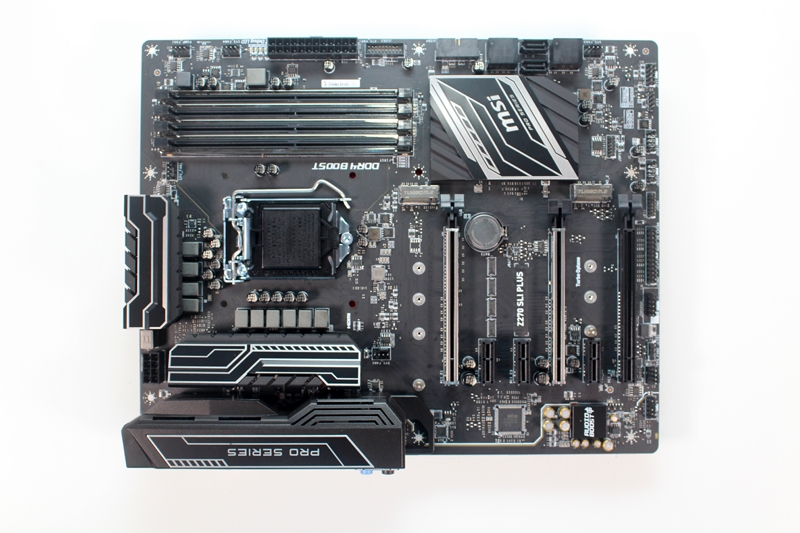 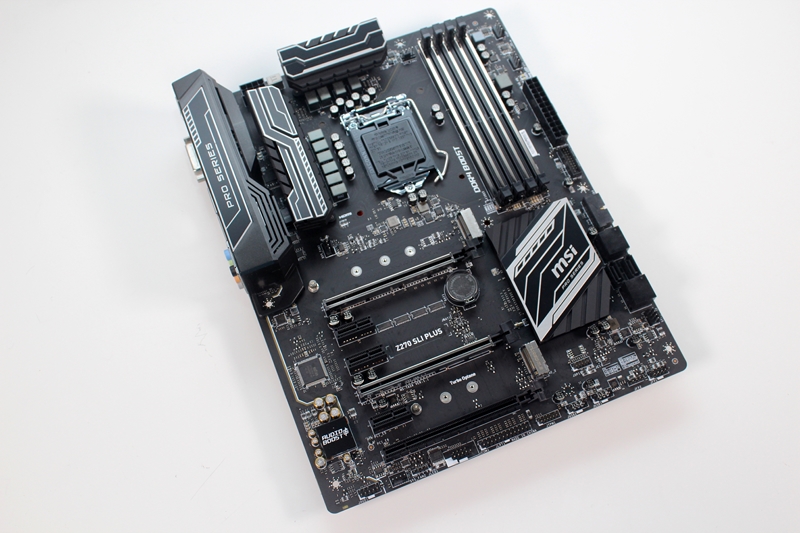 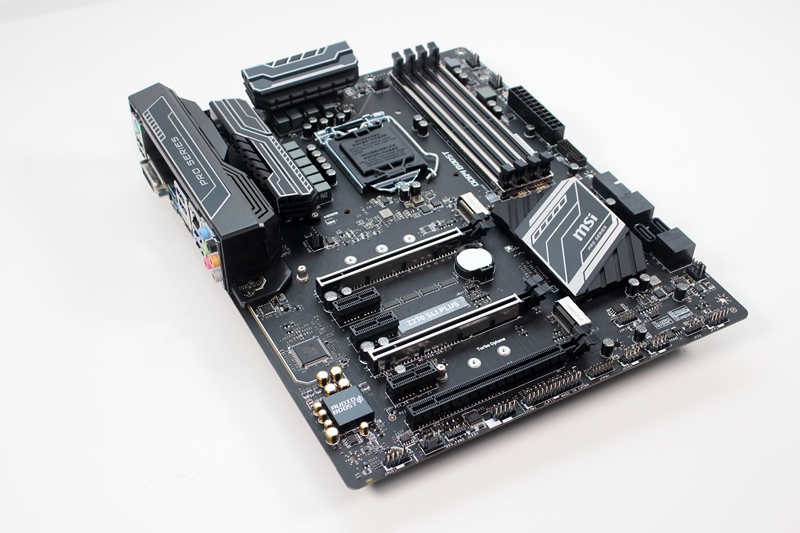 Okay, starting up in the top left corner lets run through the board layout and features. The rear I/O panel is covered by a flat black plastic cover. Behind it, they slipped a four pin PWN fan header down below the heatsink, a perfect spot to hook up a rear case fan. Above the heatsink is the 8-pin CPU power connection. The CPU socket for the new Z270 chipset is the same LGA1151 socket as the Z170 boards. There is then a 4 pin PWM fan header for the CPU over on the right between the ram and the top heatsink. 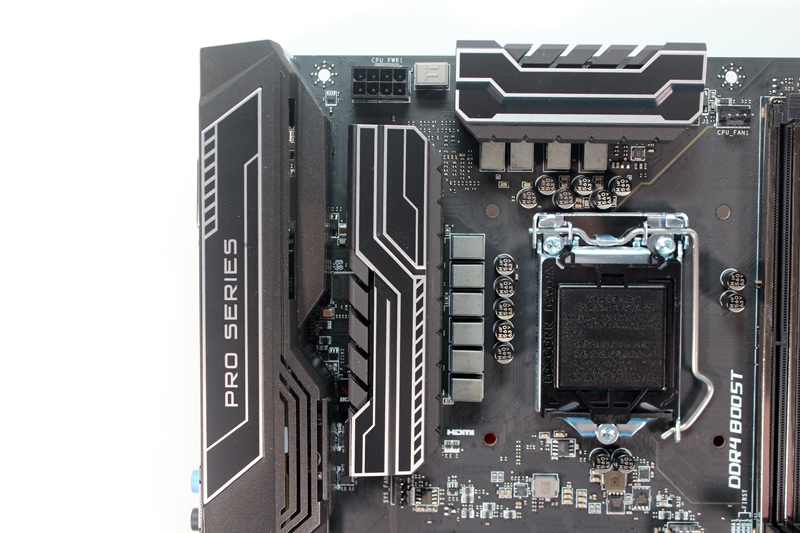 Up in the top right corner, we can see two more fan headers. One is labeled as a pump header so it is a secondary CPU header then the other is a system fan. Below the fan header, there are four small LEDs to help with debugging, they point to the area that things stopped at during boot. Then below them is the 24 pin power connection. Below that is a USB 3.1 internal header that faces up. For ram, the SLI Plus has four black DDR4 DIMMS with clips on both the top and bottom. What is interesting though is the new metal shields over the connections. With the Z170 boards and the second batch of X99 launches, a few manufacturers added shields around the PCI slots but this is the first time I’ve seen them also around the RAM DIMMS. They should help block any interference and they also add strength to keep the slots in place so they only help. 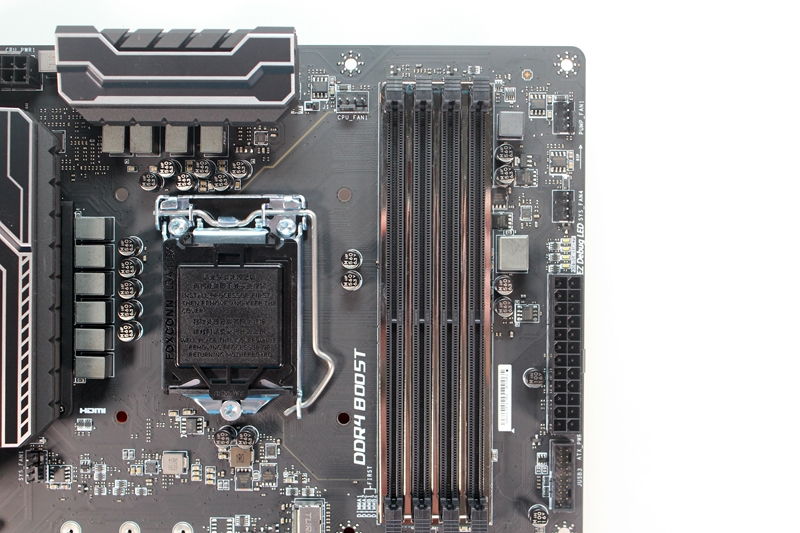 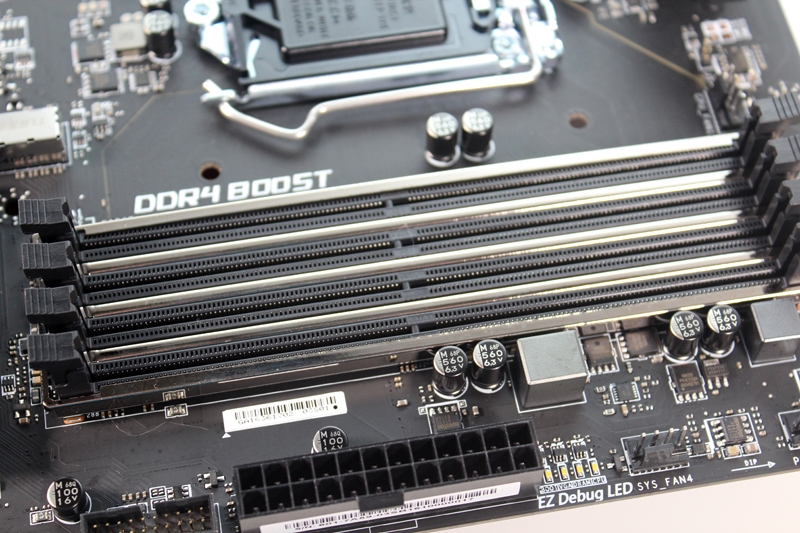 Down in the bottom right corner of the SLI Plus, there is a lot going on. Below the up facing USB 3.1 connection I mentioned in the last photo, there is a second USB 3.1 connection but this one is right angled and faces to the side. Considering how hard USB 3 cables are to cable manage, this is a nice option to have. Below it are six SATA connections with two facing up and four to the right. It’s weird not seeing SATA Express, but I guess with M.2 starting to catch on SATA Express isn’t really taking off. Down on the bottom edge, you have two USB 2.0 headers and the front panel connections. The front panel connections don’t have visible labels though so be ready to refer to the manual. There is also another PWM system fan header as well. 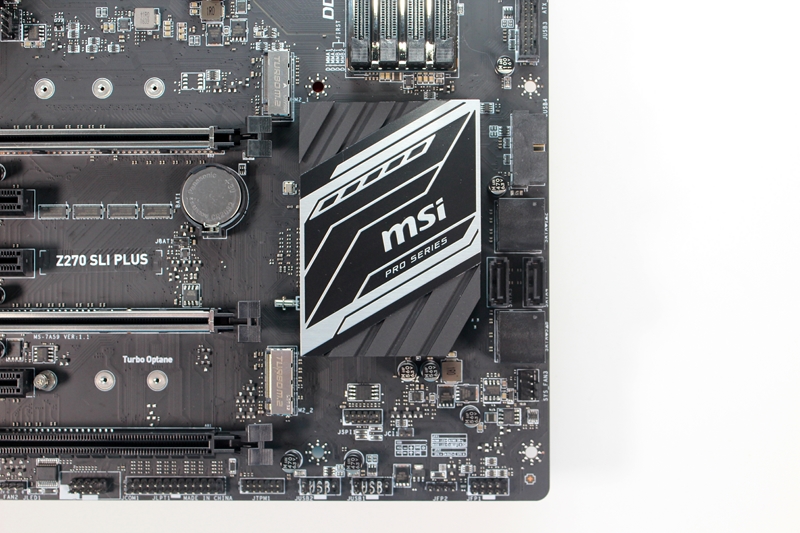 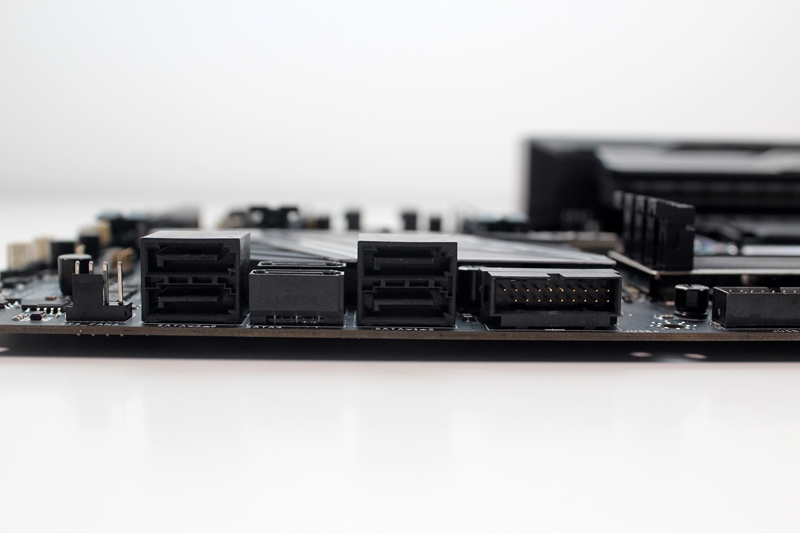 The connections carry on over to the left. There is a JCOM header, the audio connection, and an RGB LED header that you can hook up an RGB lighting strip to control your case lighting from your motherboard. There is also another PWM system fan header giving us a total of 6. The audio connection has the audio boost just above it and all of the audio chipset is separated by a small portion of resin to reduce interference from the motherboard. The audio boost logo is on a small shield that covers the amp with caps around it. 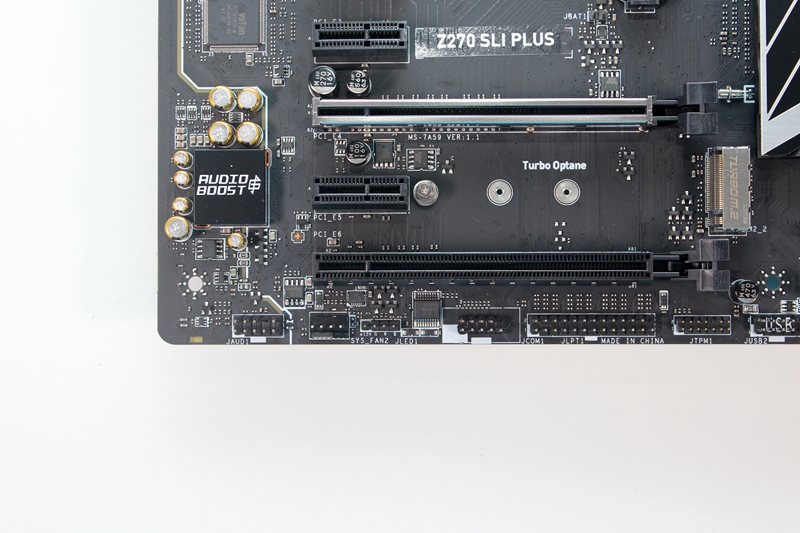 In the PCI slot area, the SLI Plus has a few things going on. For starters, it has three PCIe x1 slots and three full-length PCIe slots. 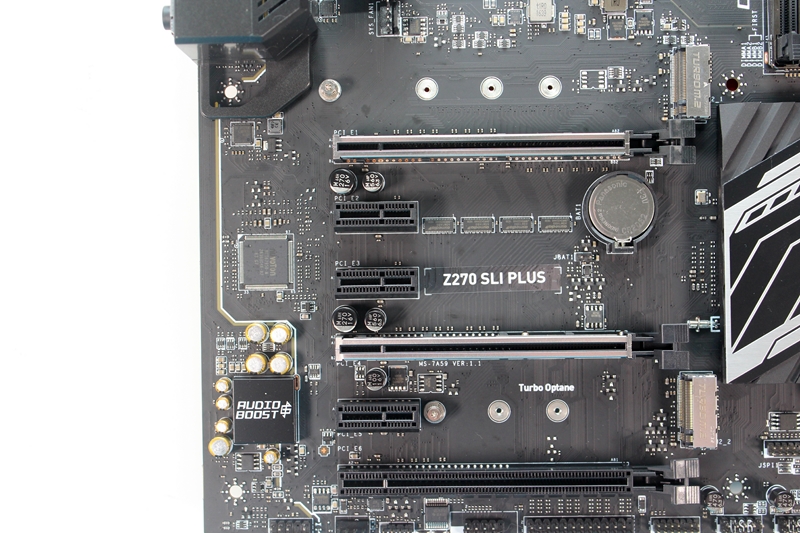 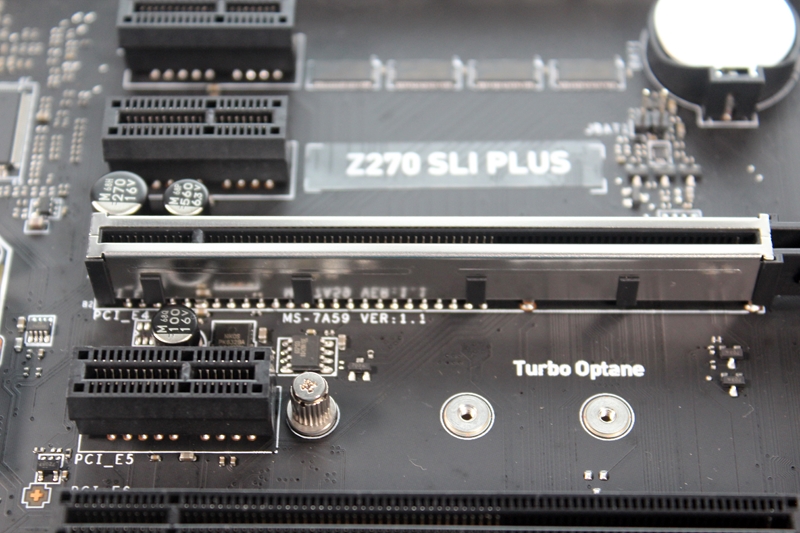 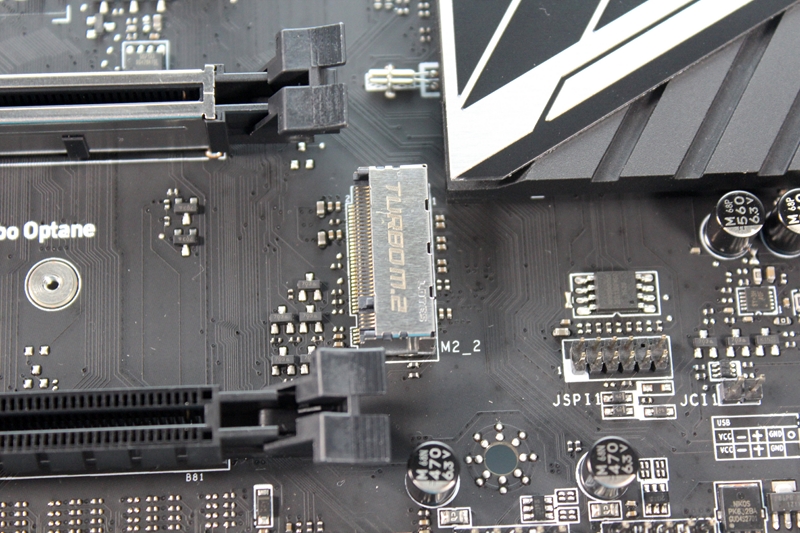 For the rear I/O panel the Z270 SLI Plus isn’t packed like some of the high-end boards but it does have a few things going on. For starters, there are the DVI and HDMI connections for the onboard video on new Kaby Lake CPUs. Beyond that, over on the right is a standard 6 port audio panel. Then for USB, there are two USB 2.0 ports on the left for peripheral connections along with a single PS2 port. Then there are four dark blue USB 3.1 Gen 1 ports. The lighter blue port is a USB 3.1 Gen 2 port in a Type A configuration and the one below it is 3.1 Gen 2 as well but Type C. The four Gen 1 ports are capable of up to 5Gbps and the Gen 2 ports 10Gbps. Last but not least is the network port that is powered by an Intel i219V controller. 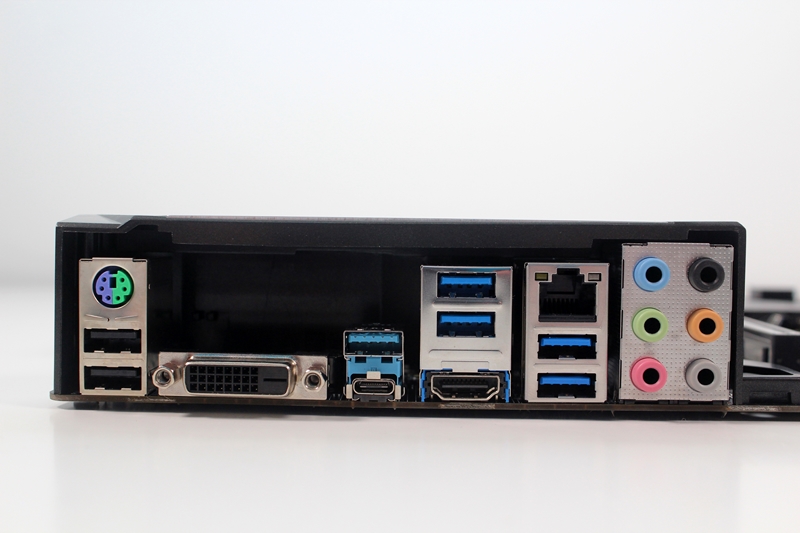 With the SLI Plus flipped over we get a better look at that sexy flat black PCB. You can see the split PCB for the audio circuitry as well over on the right side that runs all the way up to the rear I/O panel. Then there is the one little trick that MSI has been doing for a few years now that I love. They put all of the required logos on the bottom of the PCB, so they are there but it leaves the top looking much cleaner. 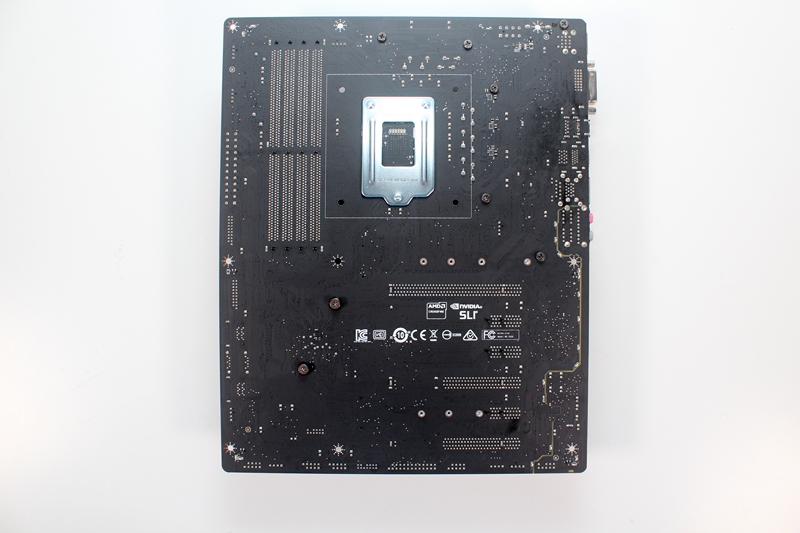