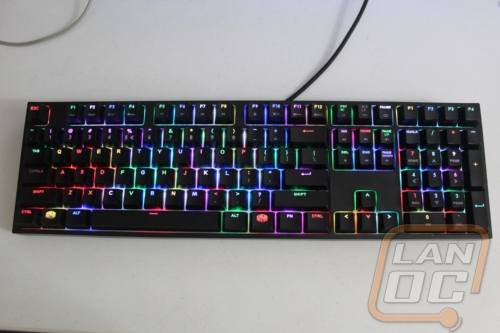 For testing, as I mentioned in the opening, I have been testing the MasterKeys Pro L for weeks now. This gave me a good chance to get a feel for it in multiple situations and to also find a few things that you wouldn’t catch initially. My initial impressions of the keyboard were really good. It had all of the features that I had loved about the XTI and it now had full RGB lighting to allow me to run white backlighting when I wanted too and to go with every other color under the sun the rest of the time. Normally I would have jumped right in typing things but really I wanted to see just how the RGB backlighting worked. I was happy to see that they kept the same design as we saw on the XTI. When you press the function key a few indicator lights light up. The Red, Green, and Blue keys light up with their respective color in the exact brightness that you are using so if you are doing a purple you will see a lot of red and blue but no or little green. Also along the top row the setting you have the repeat rate set too with light up and the same goes for the profile you are set too as well. This is a great way to quickly see what your settings are.

So to program the lighting you can flip through all of the lighting modes using Fn+F4 but I personally preferred keeping things a solid color most of the time. When I did this I toyed with the RGB colors to try to get the perfect LanOC Orange because frankly just how often can you even find a keyboard with a good orange. Getting the lighting set was quick and easy. From there I wanted to see just how well the backlighting was working so I turned off the lights in my office. I was impressed with the backlighting, the white backplate and transparent frames help a lot. I did notice that the number row was struggling a little. Much like my Vortex PBT backlit keycaps, the MasterKeys Pro L’s number row has the number legends on the bottom with the symbols on top, just like you would without backlighting. The problem with this though, the LED is mounted on the top of the switch so the number rows number legends end up being a little dim, even with how bright it all is. Funny enough it is still better than the same design with an older design with a through the switch LED, but it is still something they should have considered.

So what about the switches? Well I was really happy that they were able to go with Cherry RGB switches. Frankly after Corsair locked those switches down with the initial launch everyone seemed to jump ship so they could get their own RGB keyboard out quickly. That left us with SteelSeries and Logitech working with manufactures to come up with completely unique switches. Razer, the other big name in the market went with a slightly custom variation on a knockoff switch. Then everyone else just went with the knockoff directly. I don’t blame them, having to wait a year to even get the Cherry switches put them at a big disadvantage, cherry switches cost more, and Cherry switches have had a lot of in stock issues causing delays for everyone over the past few years. So its no surprise everyone jumped ship, but Cooler Master took their time and waited to bring out exactly what they wanted. The Cherry switches are well liked for their quality, and the surface mounted LED design is better than the knockoff design for backlighting, though the designs from SteelSeries and Logitech do give a more even light with the center mounted LEDs.

On top of going with Chery switches Cooler Master also went with the Cherry stabilizers as well. These are mounted to the PCB directly under the backplate so you don’t have to mess with the tuiny stabs under your longer keys or the tiny bars that connect them all together. This makes swapping out keys easier. They are known to rattle and on my sample of the MasterKeys Pro L this was more obvious to me than with any other Cherry stabilized keyboard before. After a few weeks they did seem to wear in a little or maybe I got used to the sound. But I was ready to throw the keyboard out the window for the first bit of my testing.

So beyond the mechanical aspects. I loved that the media controls are over on the right now and are useable with one hand. I also liked being able tp program my own macros on the fly. In the past (before the XTI) I had a few keyboards that I could record a macro on the fly, but none of them let me set them to toggle on or off or go on a loop like you can with this board.

I took a few photos of the different backlighting modes during my testing. Plus, I also wanted to show off the first photo with the orange backlighting. I took the photo without giving it any thought, but when I put the watermark on the photo it lined up completely with the LanOC logo carved into my custom wrist rest. 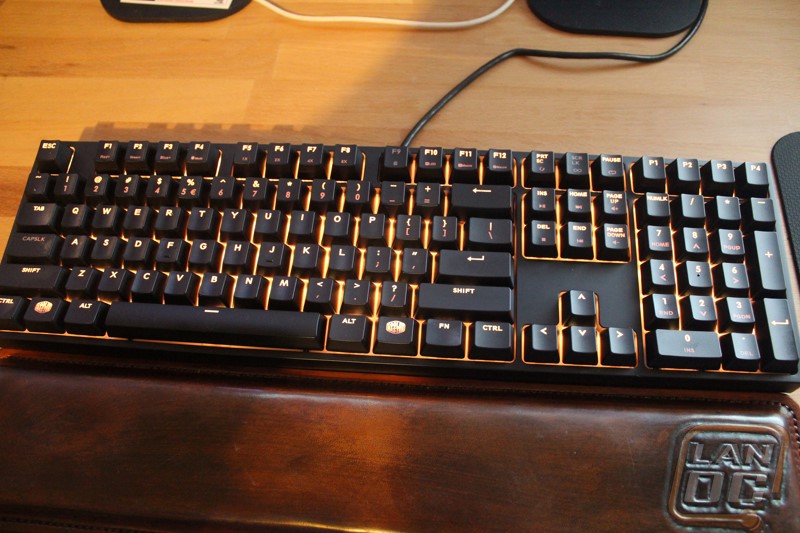 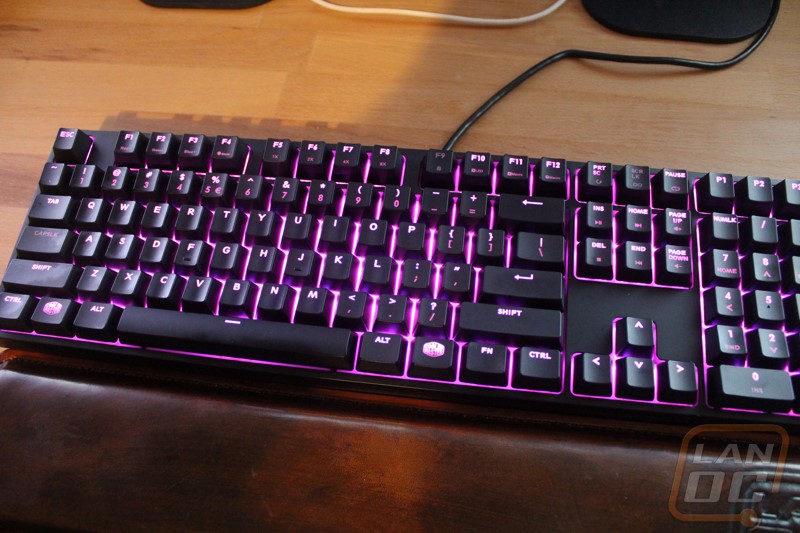 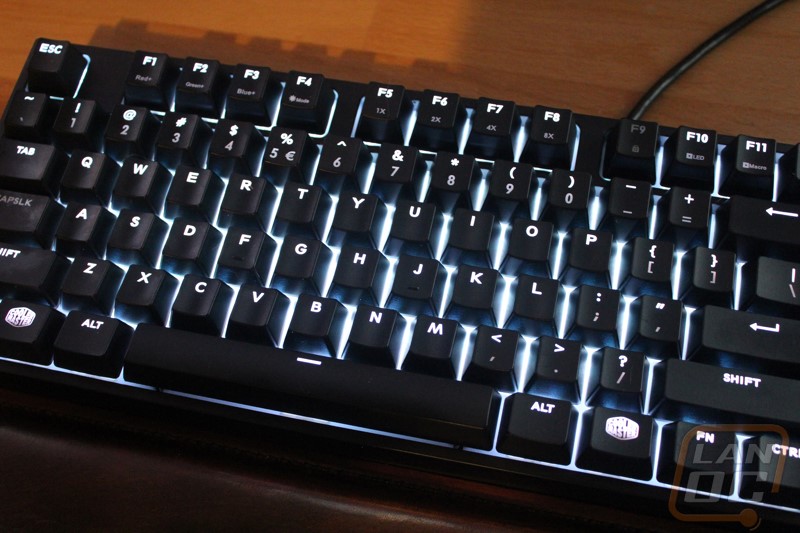 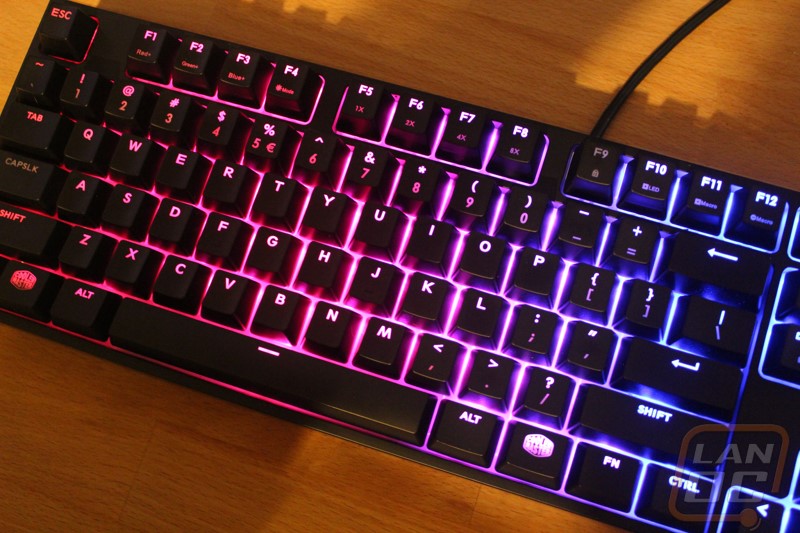 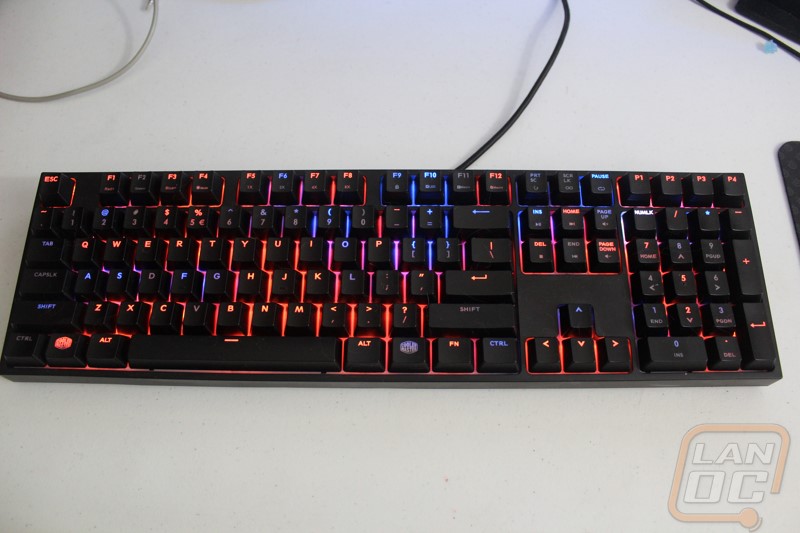 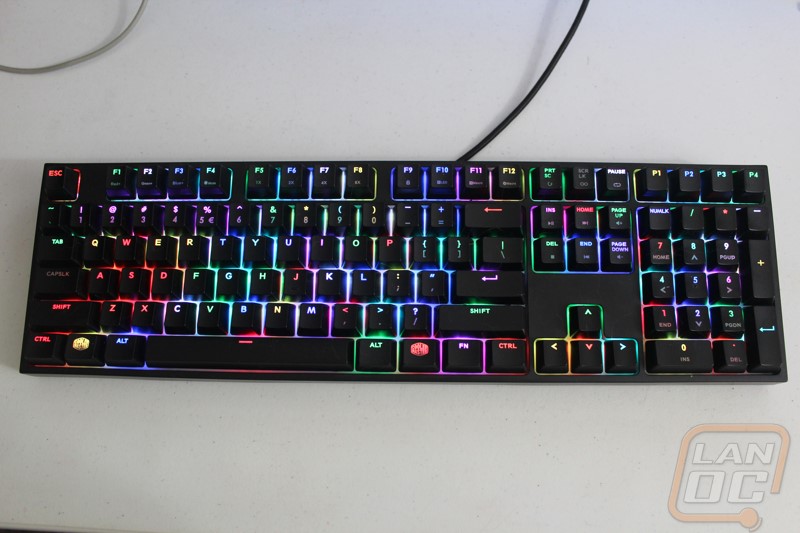 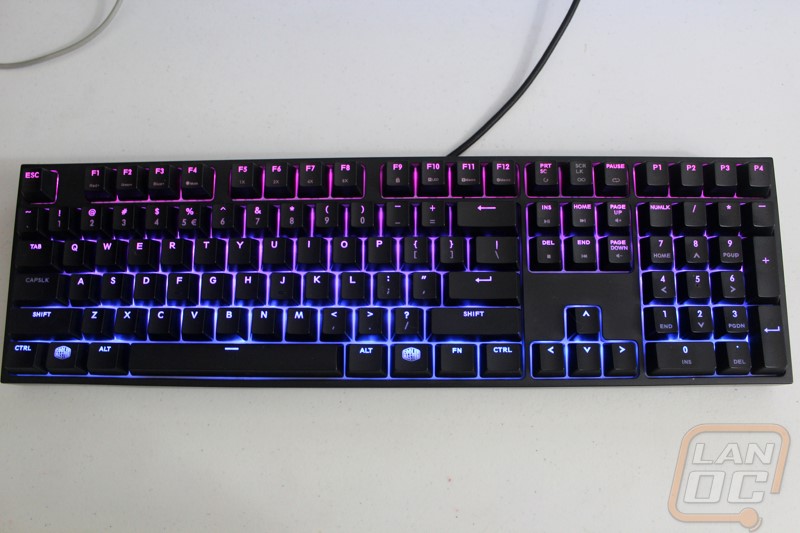 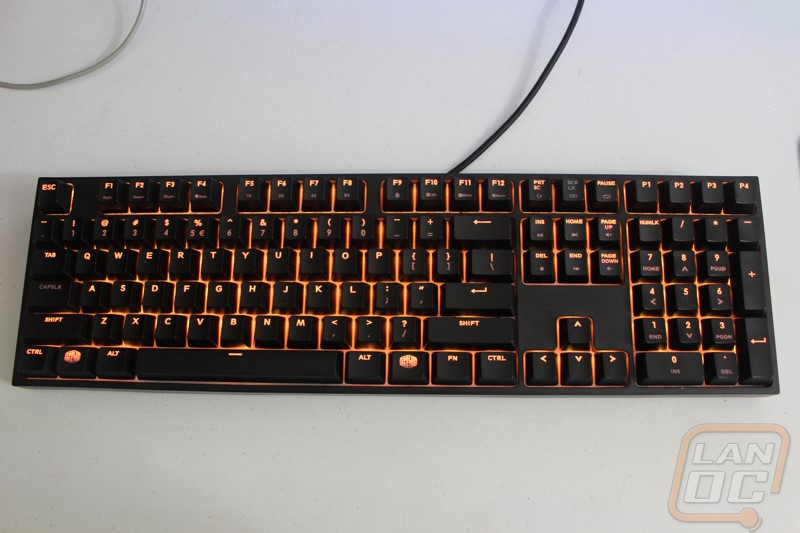