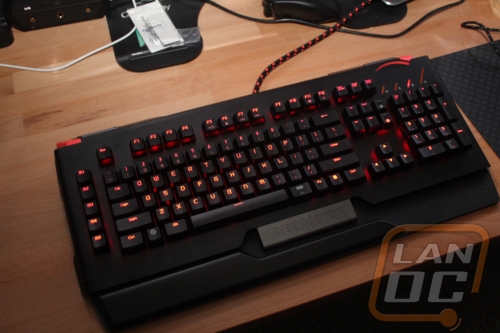 In order to fully test the Dezimator X in multiple situations I swapped it out with my normal keyboard on my main PC and have been gaming and writing on it for the past week. The first thing I noticed what that unlike other keyboards I wasn’t able to actually fit the Dezimator X and my normal keyboard on my very large desk at the same time. Typically I can just push my Code back and use the keyboard I’m testing. I do this because I also run a KVM hooked up to our test benches and the Code is hooked up to that. In this case I actually had to unhook it and move it out of the way. Considering some of the other large keyboards we have had come in I was impressed. So if you have a cramped desk space keep this in mind. In addition to that if you plan on taking it with you to LANs I think you will have trouble. In addition to the size, the weight is a little much to be carrying it around with you. That weight does however pair up with obscene number of rubber feet and keep the Dezimator X firmly planted on your desk.

Part of the reason for that large size is because Epicgear has mounted the plastic rest to an aluminum panel and attached it to the keyboard. Typically I like seeing an included wrist rest, all though I would prefer it to be easier to remove. This wrist rest on the other hand wasn’t comfortable in my opinion. I prefer something with a little padding, even if it isn’t much. Even the rubber wrist rest on the Cherry MX Board 6.0 had a little rubber. In addition the 6.0 had about three times the surface area to help hold your wrist. On the Dezimator X it is all focused on a small hard area making it a little uncomfortable. I would also prefer that it run the length of the keyboard although they did do a better job than Logitech did on the G910 in that department. 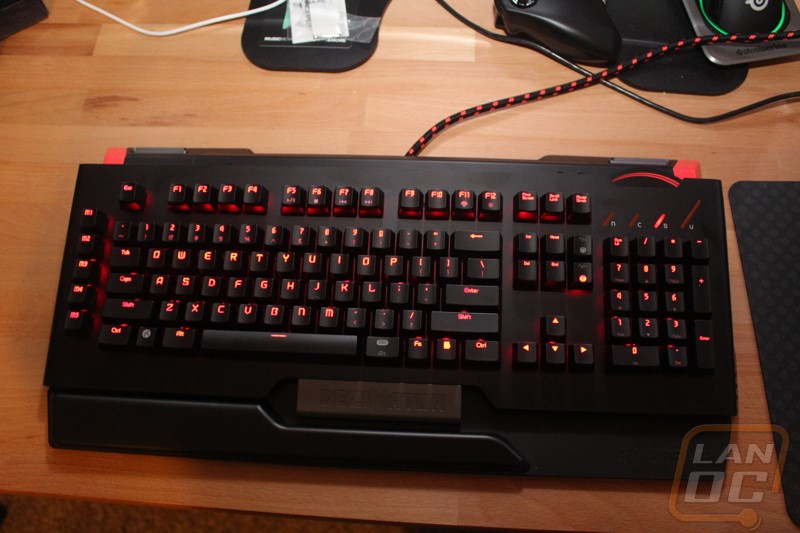 As someone who works through the night nearly every night I was happy with the red backlighting. It was more than bright enough to keep everything visible. I also like all of the different lighting effects that they give you even though I personally only use the solid on backlighting. They made it easier to get right to the effect you wanted with hotkeys that go to each one. Most companies make you flip through all of the effects until you find what you are looking for. I don’t know how many times I have flipped through lighting and thought I was on solid backlighting only to have it breath the second I move my hands or turn lights off once you click the key. The Dezimator X has all of those as well, but you don’t have to deal with them if you don’t want too. Sadly they didn’t label each of the hotkeys though so I had to get the manual out to flip through them. 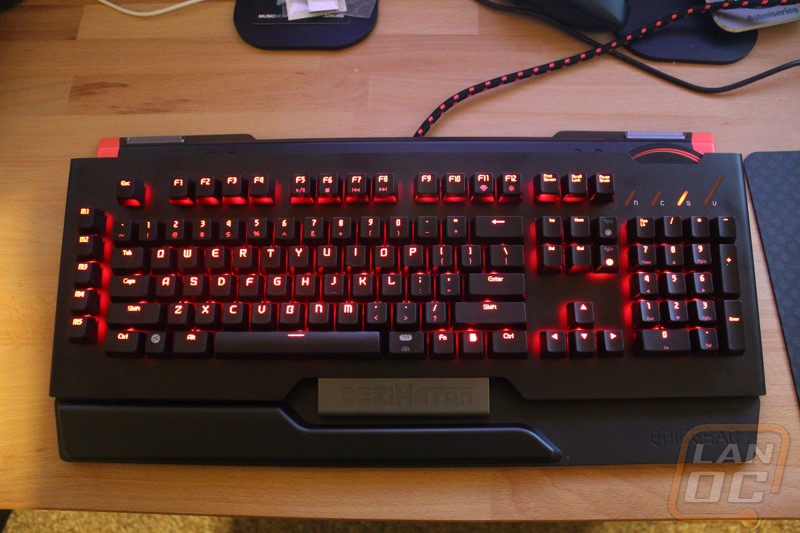 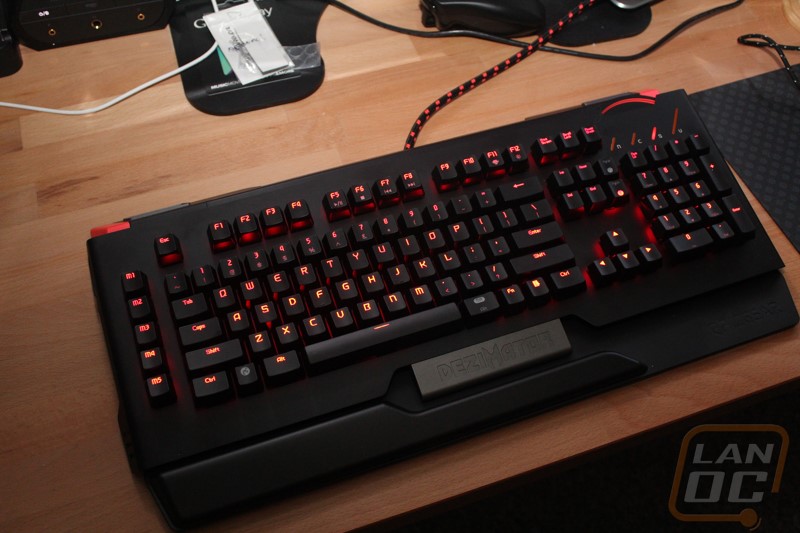 Anyone who reads LanOC often might know that I’m not a huge fan of having to use function keys to get at built in media controls. So with the Dezimator X I was a little torn, the media controls required a function key but they did include a volume adjustment knob. The knob was a little different than what I expected when I first saw it though. You don’t spin it, it is spring loaded and you move it slightly to the left and right to turn the volume up and down. How far you move it determines how fast the volume changes as well. This wasn’t a bad idea but I think the mute needs its own button in the future. You mute by pressing volume down twice. So every time I tried to bump the volume down just a few I would mute everything. If you use a light touch you can get it to go down one percent at a time, but it is a bit frustrating. Even so I would rather have this than a function key volume adjustment. At least with this there is a chance I will use it.

So beyond all of the toys, how did the Dezimator X type? Well as I mentioned earlier they went with their own branded keyswitch rather than going Cherry. I don’t mind that specifically but with it having their own Epicgear branding on it I really had no idea what to expect. The purple switches that this board has are designed to be like Cherry MX Blues with their light keypress and clickly design. They were successful in cloning that in most ways. The switches type well. If you hit them off-center they do have a bit of a rough feeling, much like Kailh switches. Earlier I said I thought they might be Kailh’s, the performance makes me think that as well but I can’t completely confirm. Epicgear says that their switches also have a “dual cross” contacting area that help them extend the switch life to 70 million clicks compared to the 50 million of a Cherry MX switch. They have also set the actuation point much higher than the Cherry MX’s as well as the Razer branded switches. I couldn’t tell the difference in testing, but I will take any advantage I can get when gaming. If it helps me lower my response time and get the kill before being killed I’m happy.  The Costar like stabilizers get the job done but do rattle a little. The aluminum backplate seems to also amplify the noise from the stabilizers and from the keys as well. This was especially true on the spacebar where it had a very distinguished ping sound every time I press it and take my finger off of the spacebar. 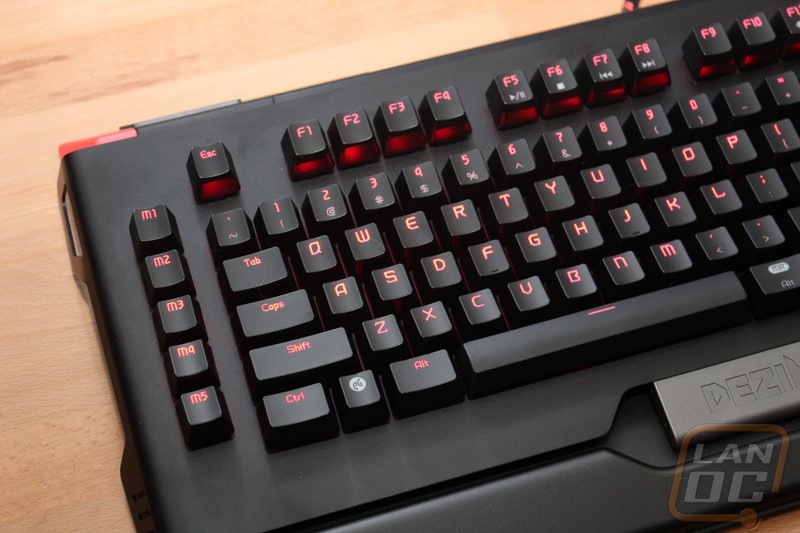