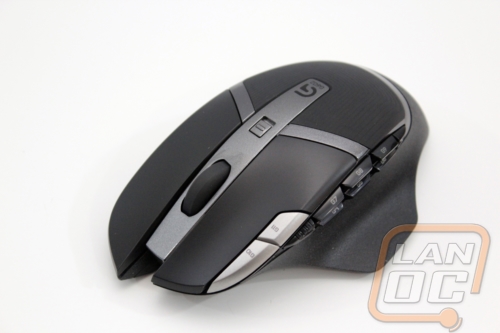 I’m impressed that Logitech managed to come up with a completely different design than what they normally create while still having a look that is clearly Logitech. Let’s take a look around the G602 and see what makes it so unique. 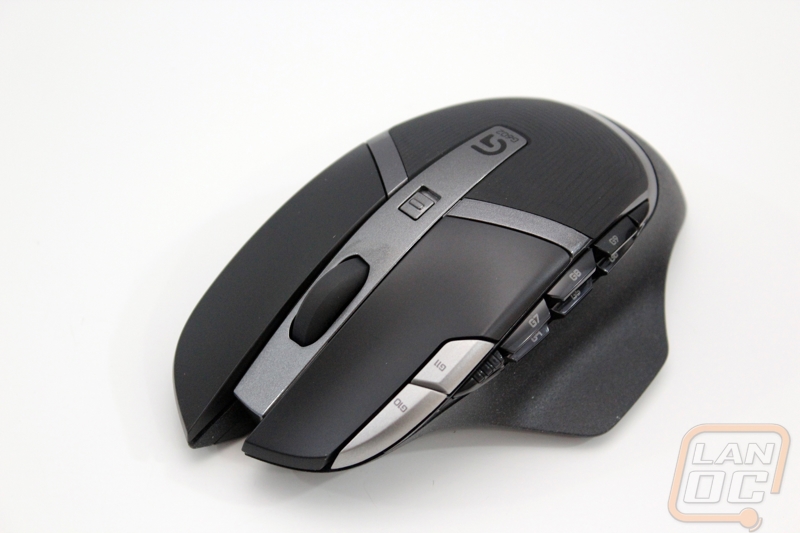 One of the G602’s key features is the bank of macro buttons along the side. There is a bit of a balance between Logitech’s MMO mouse the G600 with its 12 side buttons and most of their other mice that have 2-4 normally. The middle ground is 6 side buttons, two rows of three one above the other. They extend most of the way across the mouse and are each defined with a triangle like shape that makes it easy to press one key without your thumb pushing on any of the other keys at the same time. This is really important when you have so many keys next to each other like this. On the top side of each key they have labeled them as well. Because of the angle you can see the labels from both the top and side point of view. At the most forward point Logitech has also slipped in three LED lights that will show your DPI setting as you change it. 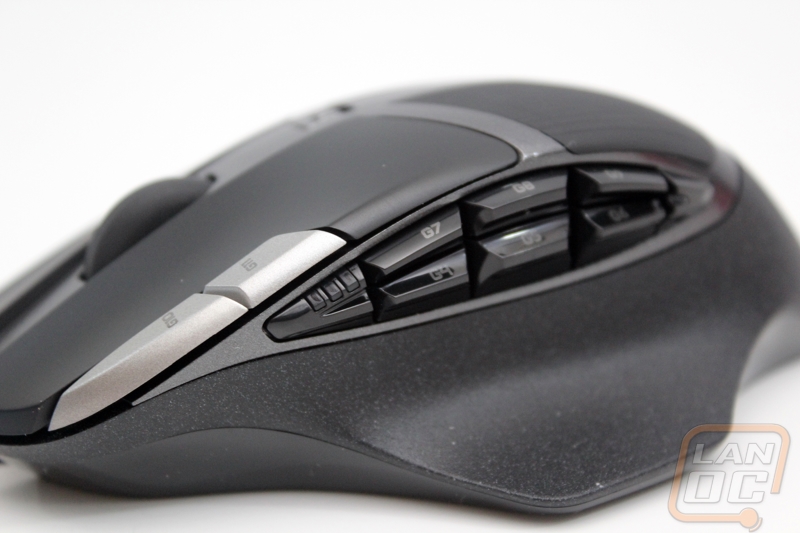 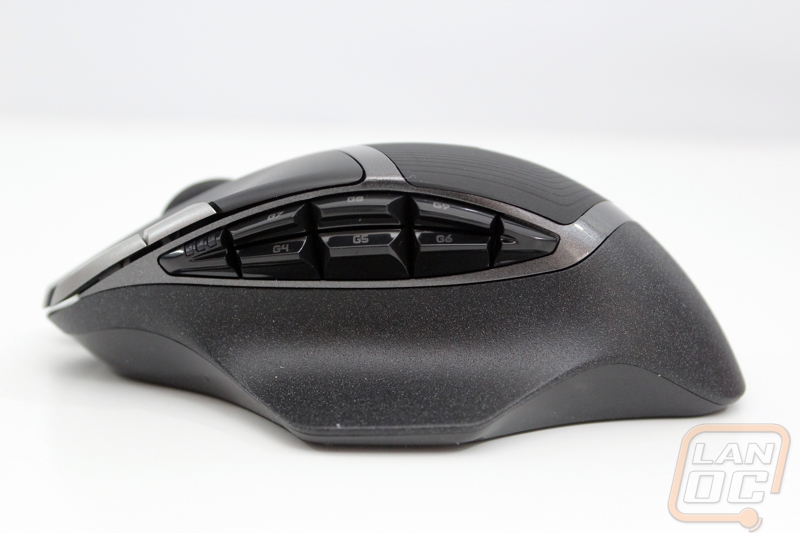 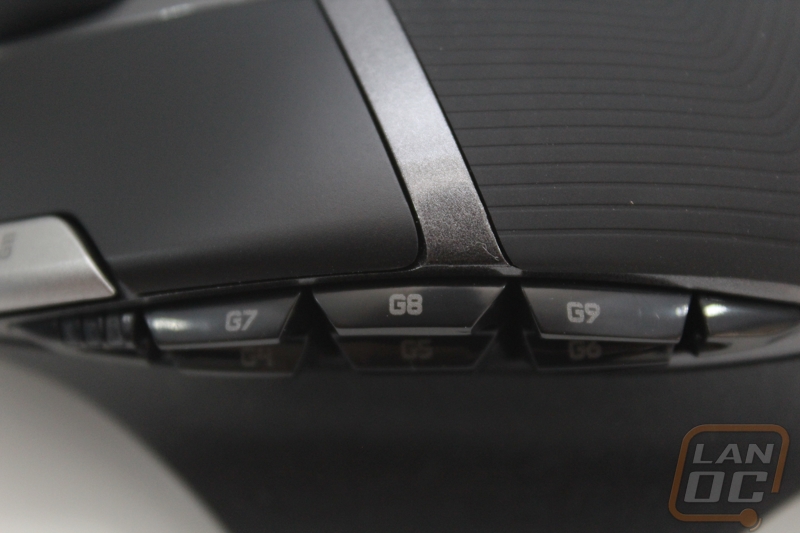 From the front and back profiles we can see that the mouse itself sits at a slight angle, typically the top of a mouse is closer to level. Along with that you can see that on the side there is an indented area along with a large wing under it in the thumb area. 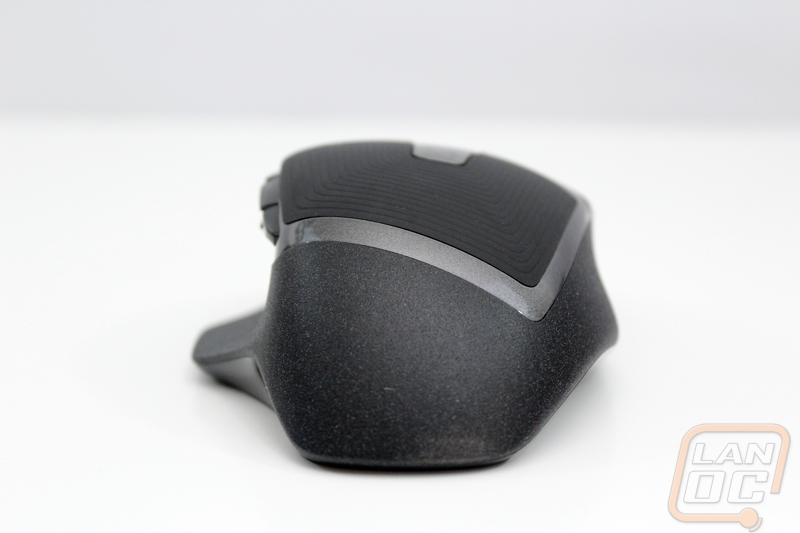 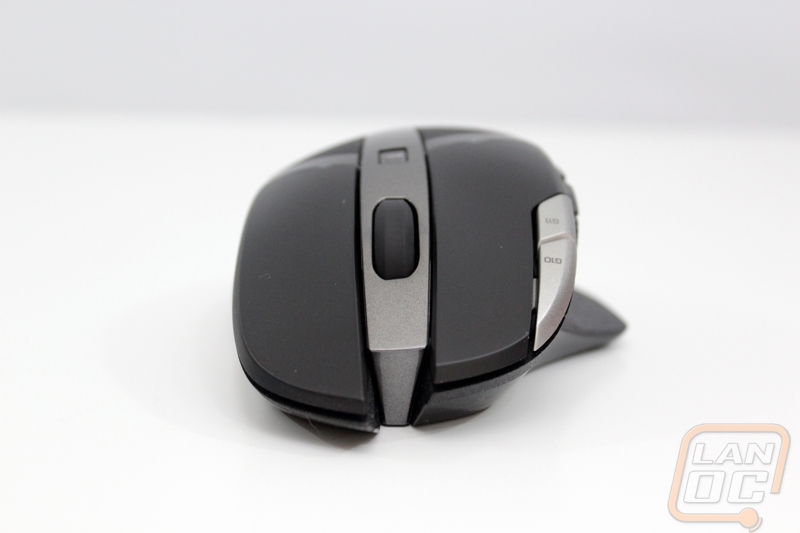 From the top point of view we can see just how far that wing sticks out on the thumb side of the mouse. The reason for this is to prevent your thumb from dragging across your mouse pad, causing additional drag. Some people however do prefer for the side of their thumb to drag ever slightly as a tactile feedback to moving your mouse around, I am one of those people most of the time. I love the multiple materials Logitech used on the G602. From the top you can see the heavy texture on the back half and sides of the mouse, the triggers have a smooth plastic, and in the middle there is a grooved rubber finish for a good grip. To bring it all together with a little styling there are small strips of a glossy finish that go between each finish.

There are a couple buttons and a switch on the top of the G602 along with the two traditional triggers of course. The two buttons are the G10 and G11 buttons on the front left corner. I have been seeing buttons in this location a lot more recently. I haven’t had any luck training myself to use them, but I still think this is one of the best locations to slip a few more programmable buttons in, you could even create a rapid fire macro on one and us it in game like you would your normal trigger. Also on top, back behind the scroll bar is a small switch. This is related to the wireless aspect of the G602, this switch lets you go back and forth from game mode to energy saver mode. Game mode will light up an LED right in front of the switch in blue color and energy saver will have a green LED.

The last thing on the top area of the G602 that I wanted to cover was its scroll wheel. This was a major departure from what we have seen in the past from Logitech. For starters there isn’t any free spin mode button available. Additionally the wheel itself is rubber but doesn’t have any texture to it. I did find it to be very grippy still, but it’s unlike Logitech to go with a smooth finish here. The last and biggest change is the lack of side scrolling. In the past this has been a feature I have only seen Logitech go with and only recently we have seen Razer and some others include it as well. I was very sad to see it go, even though I don’t normally use it. It was always nice to have two more macro buttons available there if you needed them. 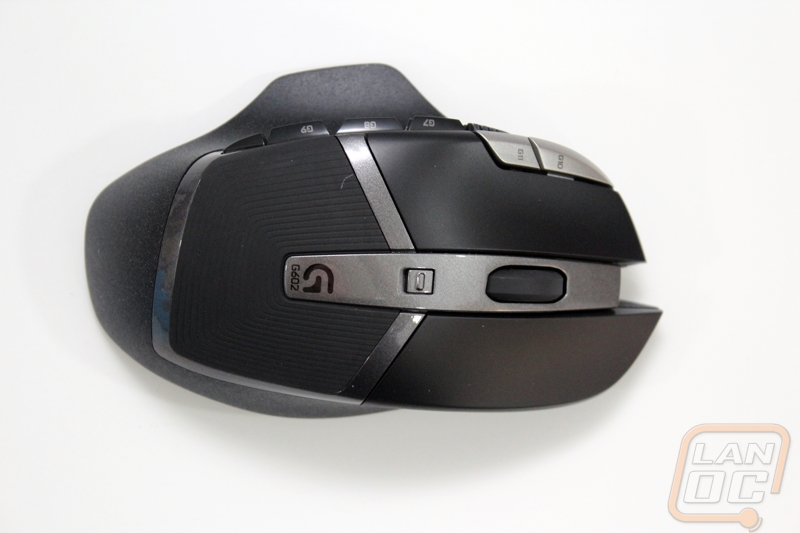 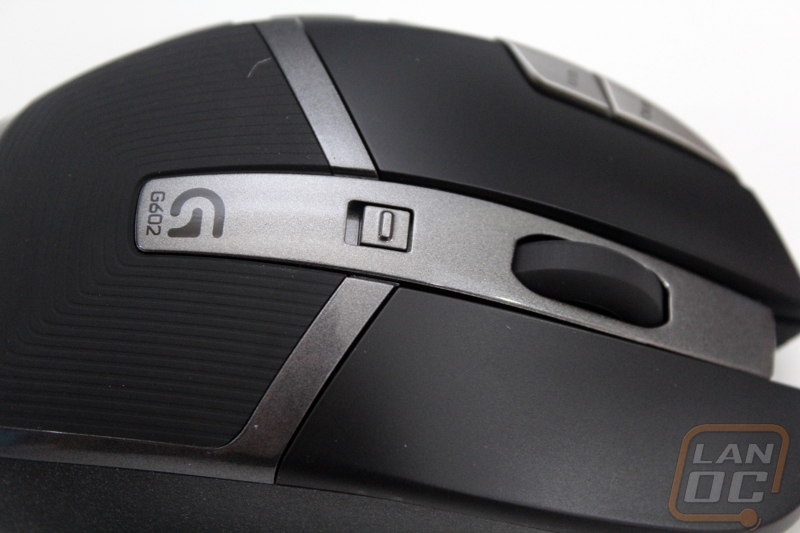 On the underside of the G602 you have four Teflon gliders, one on each corner. Each glider is fairly large meaning they should hold up well compared to mice with small gliders. In the middle of everything we can see the sensor and just above it the on and off switch. With this being a non-rechargeable wireless mouse it is important to be able to turn it on and off to save battery life. 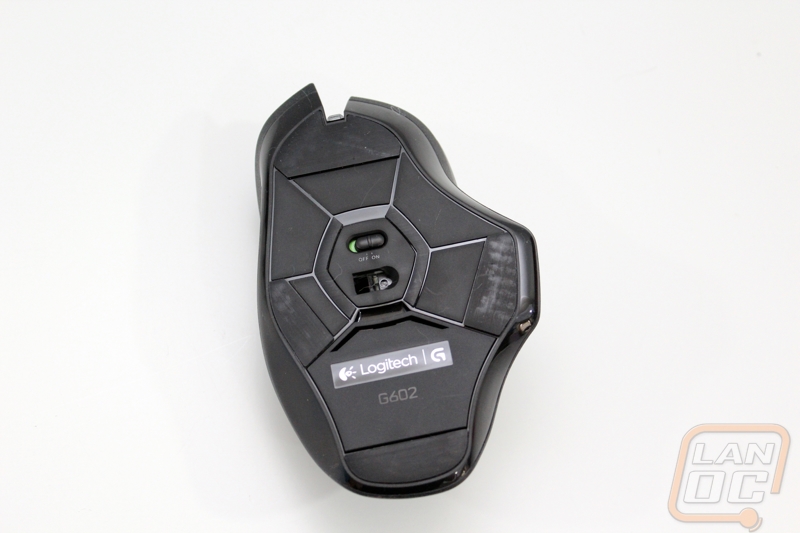 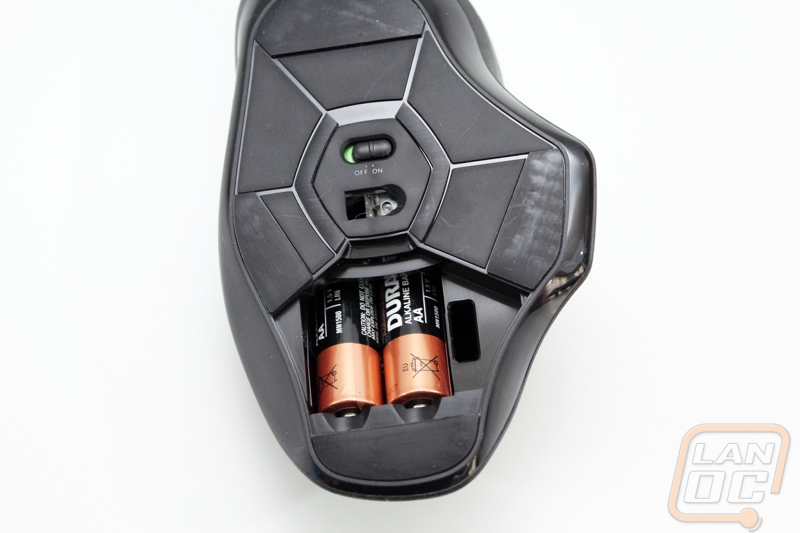 I mentioned the switch behind the scroll wheel before; here you can see where it lights up when the mouse is on. When you are in standard mode the light is green and game mode is blue. 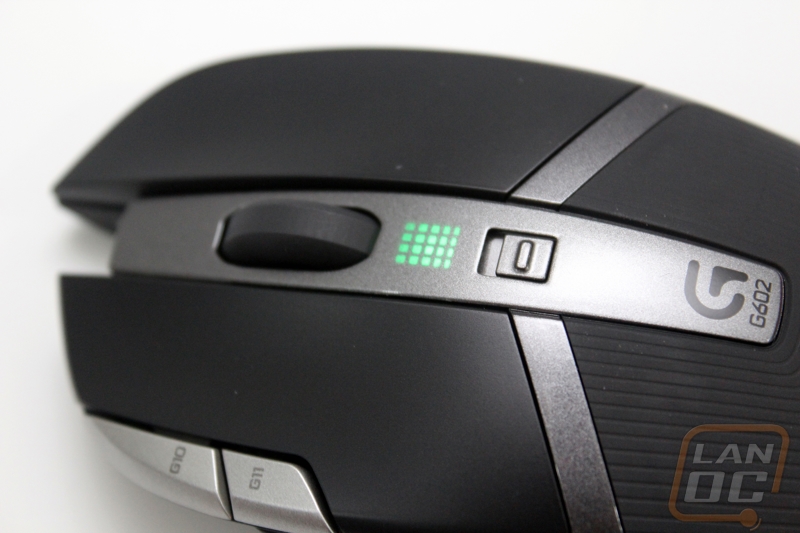 Just in front of the side G buttons are the LED indicators for the DPI speed settings. 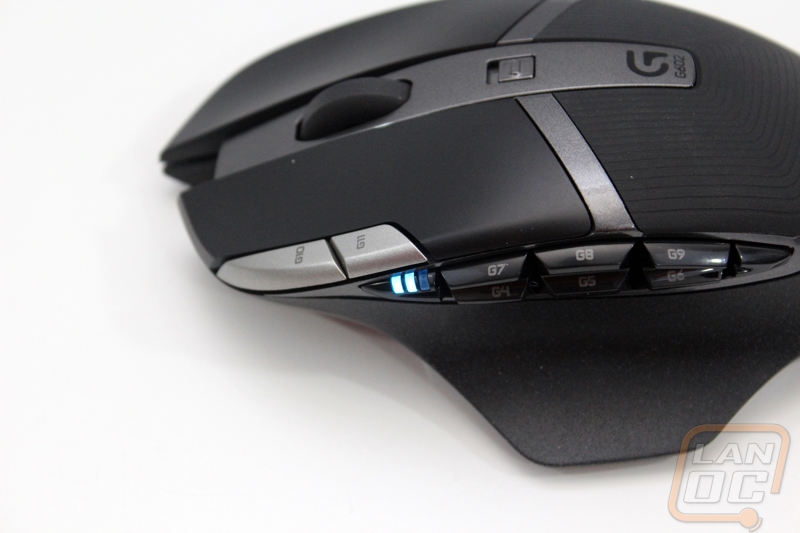 When you put the G602 up next to the G700s you can really see the difference in design. The overall shape is similar, but when you get into the details the G602 feels more like the direction that Logitech is going where the G700s is more like where Logitech has been in the past. I wouldn’t be to shocked to see next year’s Logitech mice share a lot more with the G602. Of course I hope to see some of the features that the G700s has in those future models, like the rechargeable battery, side scrolling, and the “infinite” scroll. 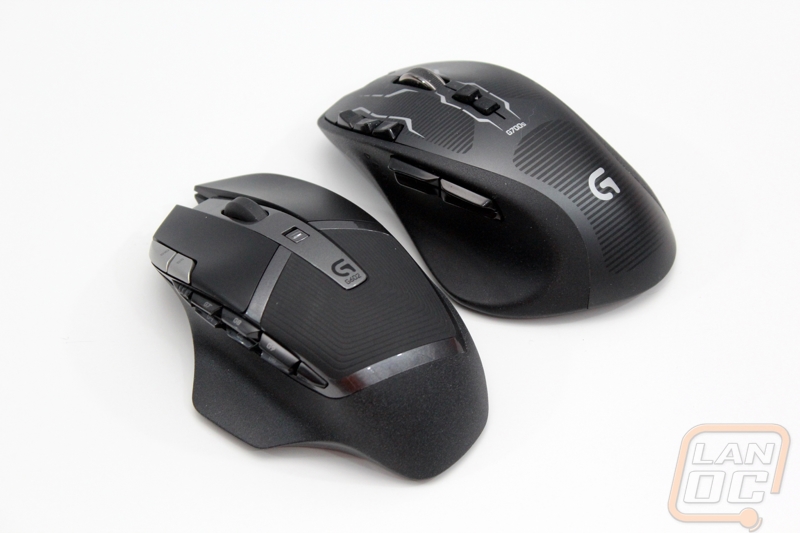 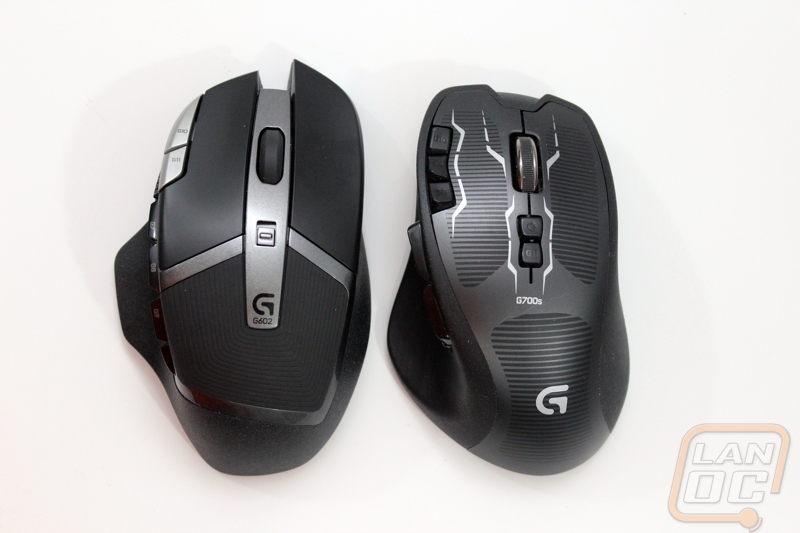 garfi3ld replied the topic: #33309 15 Nov 2013 19:11
Before the weekend I take a look at Logitechs latest wireless mouse. It wasn't perfect, but I have yet to come close to killing the battery as well!
Read More...

We have 1245 guests and one member online