When Wes first asked if there were any games that I had in mind to review, I immediately thought about Far Cry 3. It’s a game that looks like a blast, but not one that I would be likely to purchase. This is due to problems I had with the second Far Cry, which were mostly PC related issues. However it is with an open mind and heart that I take a look at Far Cry 3, but with shooters being a dime a dozen, and open world games starting to run their course, let us hope that Far Cry 3 has that something special, that little extra “uhmph” to make it something that I will enjoy reviewing rather than regret.

Far Cry 3 takes place on a tropical island; it follows Jason Brody and his group of friends as they celebrate one of them acquiring a pilot’s license. The group of friends enjoys the sights and activities that the island has to offer, from jetsking across the vast ocean to partying it up with the locals at a club. Eventually the group decides to take a trip skydiving, probably at the suggestion of Jason, the daredevil of the group. During their skydiving trip everything goes as expected, except the group gets scattered across the island and eventually picked up by the pirate named Vaas. Vaas wants to ransom the group to their parents, not to return then, but instead to sell them into slavery. 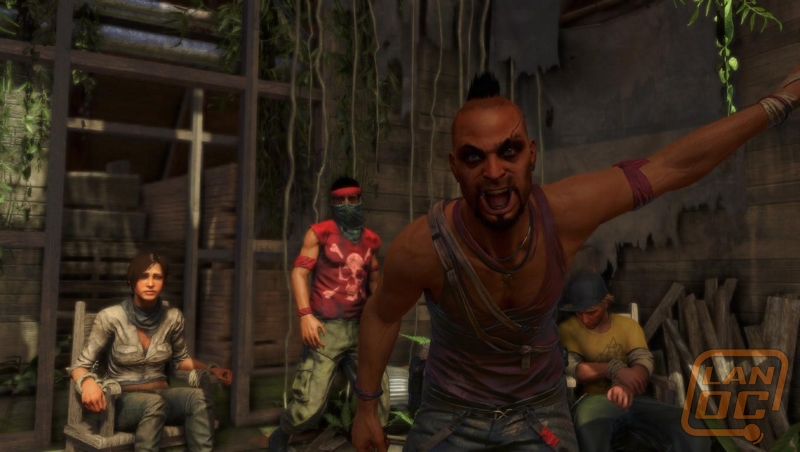 After being captured Jason and his older brother Grant attempt to escape the pirate encampment. Once out of the clutches of Vaas and the pirates Jason is saved by a man named Dennis from a group of islanders known as the Rakyat. The Rakyat have suffered from oppression at the hands of Vaas and his pirates. They give Jason a tattoo and lead him along a path to becoming a fierce warrior. The Rakyat help Jason search for his remaining friends and family by giving him intelligence and information about the island and his tattoos, in return Jason helps the Rakyat by taking back outposts, turning on communication towers and completing other small side missions for them.

Fildy replied the topic: #29067 26 Jan 2013 03:41
I am eager to get some discussion on the game, because I loved it, but in another thread someone said that they disagreed. I want to see what people liked or hated about it!

We have 1319 guests and no members online