Altitude is best described as a mish-mash of everything people like about multiplayer games. Seeing as how all of the editors here at LanOC Reviews have put many hours into the likes of Call of Duty, Team Fortress 2 and myriad of other multiplayer titles we all decided to give Altitude shot. Here's what we thought.
Game: Altitude
Published by: Nimbly Games
Developed by: Erik Measure, Karl Sabo
Platforms: Windows, Mac OS X, Linux
Genre: Multiplayer, 2-D Ariel Combat
Release date: May 1st 2009
MSRP: $9.99
Reviewed by: Tim Ashdown, Wes Compton and Adam Army 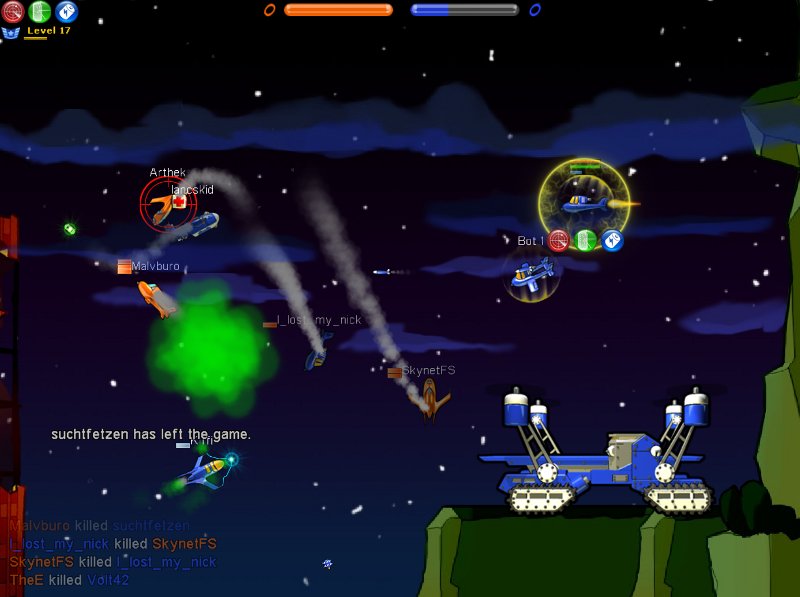 Altitude's art design stood out to me immediately. Perhaps it was simply because I have grown accustomed to flight games aiming for a more realistic look. It was refreshing to see a game hold true to it's roots, games like 1942 for example. With more simple, stylized graphics, Altitude emits a certain sense of nostalgia right from the beginning. Reminding the player of an simpler time in gaming's history when you didn't need a desktop full of buttons to command an aircraft.
Diving into the game, Altitude has an elaborate gameplay scheme underneath it's approachable facade. The controls are very simple to master, including directional keys to steer, a boost accelerator, and fire/alternate fire buttons. Also when not throttled enough or recovering from a crash, your plane will stall and require you to accelerate  and fly into a leveled position. The overall condition of you plane is recorded by a health meter, which becomes especially important in gameplay modes requiring you to shoot down opposing planes. Other game types include: bombing an enemy base, racing, and a goal score mode. In this mode, one ball is placed on the field and then carried by the first plane to reach it. In order to intercept the ball the opposing team must shoot the carrier down and retrieve the free ball. The objective is to then take the ball to the opposing team's goal and shoot it in. This utilizes the accessory feature, which can be anything from a ball to a powerful missile, put into use through the 'S' key by default. For every kill, or score, or point, you'll receive a certain amount of experience that can be used to upgrade and unlock new planes.  For instance, a "perk" unlocked early on is the "Rubber Hull" perk, which reduces damage done when the plane makes impact on a surface. There are a plethora of other unlockables available to reward players. With simple controls, an appealing art-style, and an in-depth level system, Altitude is an excellent change from modern gaming's complex nature. 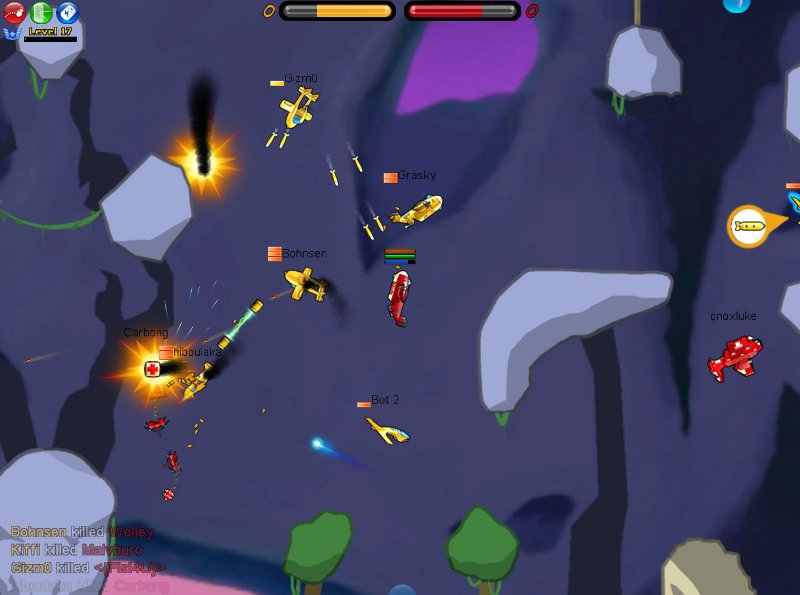 For a minute there I thought I was back to my Nintendo gaming days until I realized the little planes were not pixelated. As it turns out a game like Altitude would feel very on your old school consoles but you would be missing its biggest feature: multiplayer! I'm not talking about hooking up 2 or 4 controllers to a console multiplayer. I'm talking about real multiplayer against real people. Now we are talking! Altitude's 2-D graphics are simple but appropriate. The fact is, this game is trying to be very inviting. That's not to say that it doesn't look good. Frankly, I spent too much time enjoying myself to really focus on how anything looked at all. As you play through the game you can level up and upgrade your plane and there's a bunch of perks you can use. There's also 60 different levels which gives you a lot to look forward and is a nice reward after hours gameplay. Even after playing through the included tutorials my first few online matches weren't very successful, in fact even after getting the hang of things it can be a little difficult. The reason for that is that there are a lot of experienced players who populate most of the servers. Which really is a testament to the addictiveness of the game. Altitude really is one of those games that you just can't walk away from. I really have to take my hat off to Nimbly Games for creating such a good example of how a game can be simple yet still an incredible amount of fun and is just as compelling as most "Triple-A" games currently on the market. 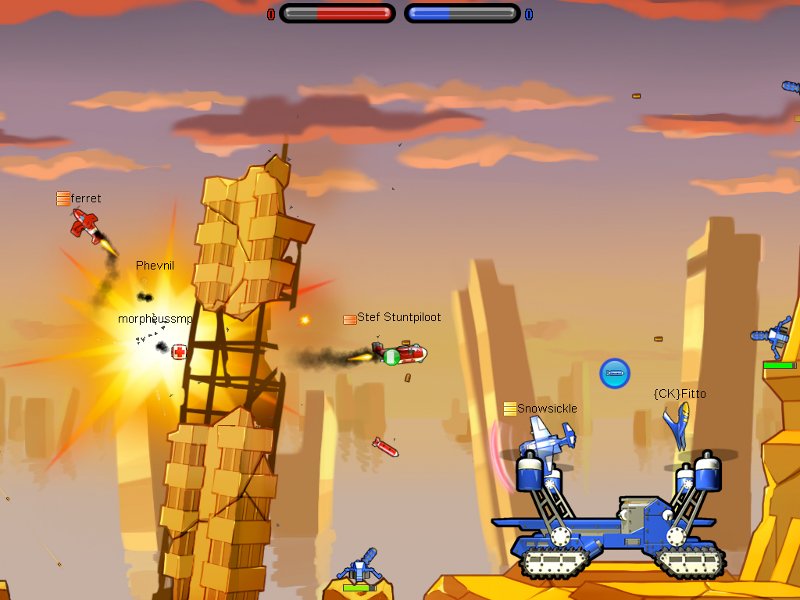 Much like my contemporaries above I too felt a certain ping of nostalgia as started up Altitude. I found that Altitude invokes very fine memories of Grand Theft Auto 2 LAN matches with my friends. Only now we don't have to sit in a smelly room together. Altitude is kind of a wolf in sheep's clothing. Beneath it's friendly and colorful art-style lies an incredibly deep and well balanced shooter. Each of the 5 plane classes has each own unique set of weapons which can be used in all sorts of different ways. I frequently found my self switching classes mid match to try and counter the play-style of others. It can be tricky business but once you figure it out Altitude becomes great fun. However I did find the in-game interface and server browser a little unreliable at times but I'm sure Nimbly Games can iron out those minor kinks over time. One of the best things about Altitude is that matches don't take very long to play. You can sit down spend only a half an hour or so and probably go through about five or six matches. A great way to kill that excruciating 30 minutes right before dinner. In short, I have to say that Altitude is some of the best fun you can have for under $10 and all this was made by only two guys. Impressive! 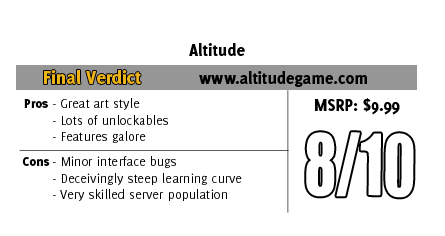