Capcom's much anticipated foot-and-air hybrid finally released on January 19th, developed by Airtight Games on the Unreal Engine 3. Airtight has created a mix of on the ground first-person action  with aerial thrid-person flight and combat, Dark Void was a title we were anxious to get our hands on I finally get to sit down to reflect on my experience with the latest title from Capcom.

Dark Void begins with one of those flashback sequences featuring some no name character, introducing the player to the the game's ace-in-the-hole flight combat system. No time is spared in throwing you into the action; you'll have a short while to master movement before you're attacked by aerial hostiles. Capcom was obviously anxious to show off this feature, and it is something to experience. If you can reference to any other games you may have taken to the air in, most are restricted to a certain degree or just show little difference between ground movement, save a neat background. In Dark Void, as you quickly realize, aerial combat plays much like a flight sim: you can feel resistance, movement is based on more of a coordinate plane, pulling back to ascend or forward to descend (the controls for flight are set to inverse by default). You can boost, a command which won't disappoint, but you'd better be prepared to control it. A brake is available, but Capcom is holding to a more realistic experience, so you won't come to an immidiate halt. 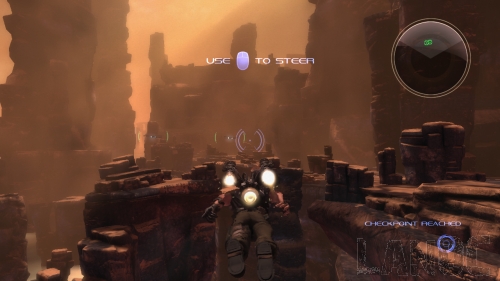 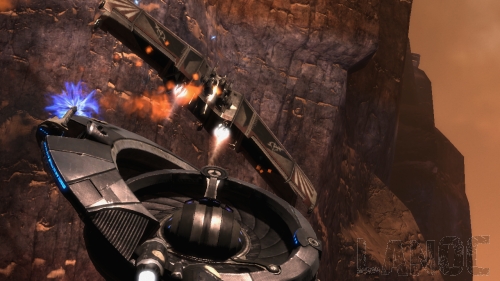 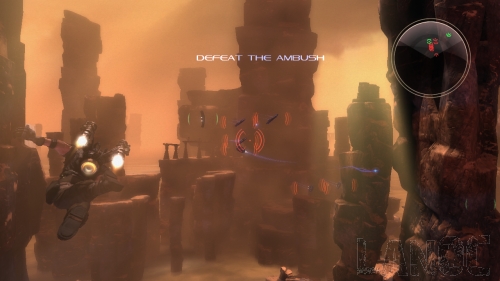 Holding true to the shotgun-style from the opening sequence, no time is wasted in throwing you into the middle of an elaborate plot. You are Will Grey, a cargo pilot who is introduced as he waits for his next client, who unbeknownst to him is Ava, a young woman with who he shares a rocky romantic past. Soon after take-off, Will's plane crashes into the infamous Bermuda Triangle, their last sight before blacking out being a glimpse of an exterrestrial ship of somesort. They awaken in a remote jungle, unsure of their whereabouts, and venture off exploring for some sign of civilization. 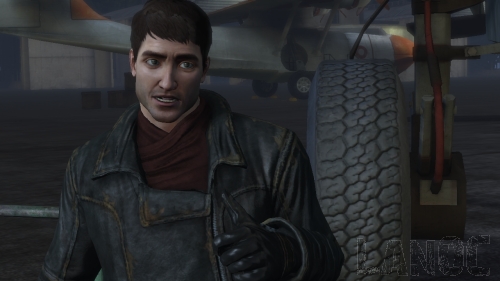 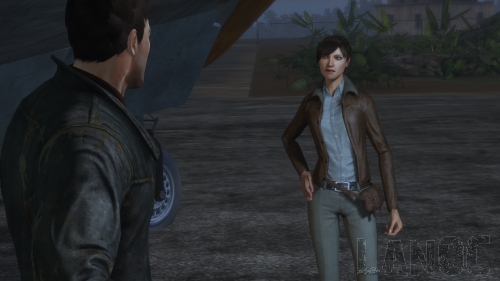 The cut-scenes acting out the story have the appearance of actual gameplay graphics, as opposed to popular CG rendering. This is a testament to the game's visual attractiveness. The graphics are definitely above average, a requirement for a game such as Dark Void to succeed. Capcom essentially creates an entirely new universe, an alternate reality based out of the Bermuda Triangle. While you are limited to a defined 'path', everything appears to be actually rendered as opposed to a background image. Another interesting aspect is the camera focus. The game almos seems to keep the area you're in sharp and defined, and blurring the surrounding environment a bit to help give an unexplored feeling while concentrating on the vicinity at hand. This does, however, create for some low quality environment graphics when the video settings are on lower options.

Once control is returned to you, you'll receive a few important directions and have the opportunity to earn your sky legs. After getting a feel for the controls, you'll come upon your first hostile, introduced by snapping the neck of some randomly placed soldier (who, by the way, you've decided to follow with little explanation). After witnessing such an act, Will naturally arms himself with the fallen man's gun, and somehow Ava has secured one for herself as well, and will provide some cover fire for you in time comes. Following the events is another stiletto of instructions on how to use weapons, which are pretty standard for any first-person shooter. Right-trigger is fire, left is zoom, and so on. Players can take cover behind objects, return blind-fire or expose themselves to aim, and even perform melee-kills if you're brave enough to rush foes. Use at caution, though; as mentioned above, your enemies like to break bones too. 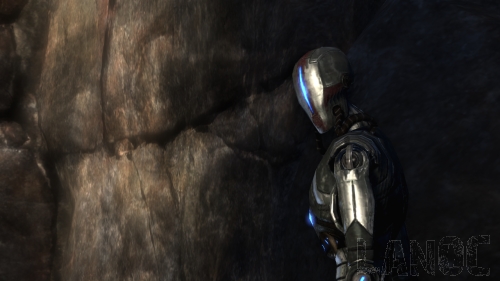 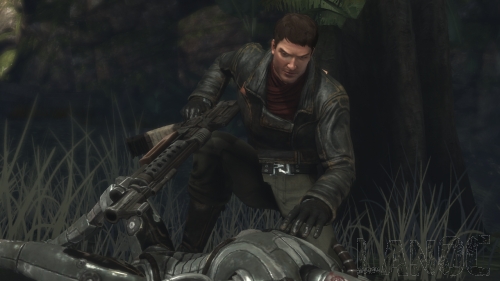 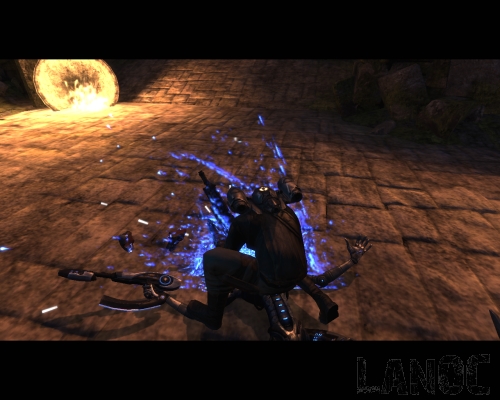 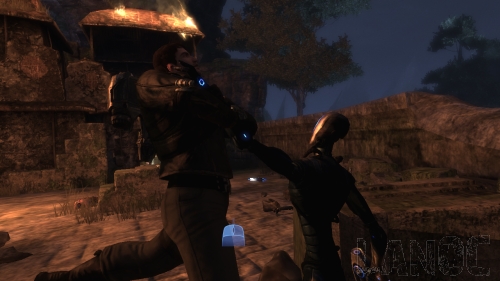 There are a few intuitive additions to ground combat that compliment Dark Void's vertical exploration feature. For instance: early in the game you'll need to scale a rock wall to reach the ground, with enemies positioned among ledges they are intent on stopping you. With the press of a command button, your perspective is switched to a vertical view over the ledge, allowing you to take cover by removing yourself from view. Once clear, command buttons appear over surfaces you can drop to, and you'll continue down the cliff side. Ascending work much the same way, using the help of the thrusters from your jetpack, you'll choose a destination by focusing it in your view and pressing the command button to boost to it. The thrusters can be used freely as well, but are limited to more of a glide at least until you are given the option to upgrade them. 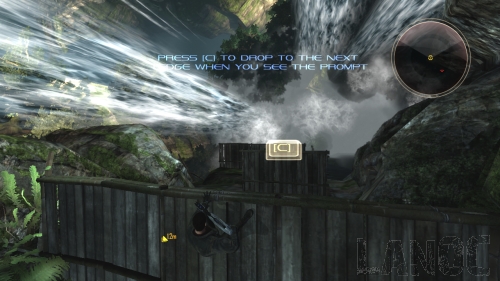 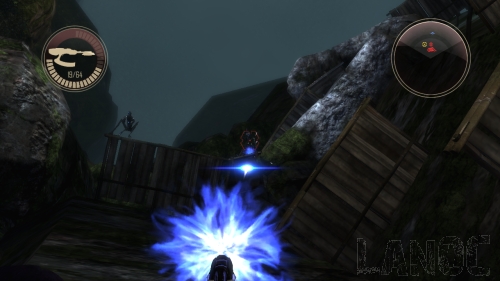 Dark Void also features an equipment upgrade system, accessible at the beginning of levels or through chests scattered about. Here players can choose which two of their guns to take with them (though at certain points in the game, your load-out may not be what you get) or choose to purchase upgrades for any gun using Tech Points collected from kills or areas off the beaten path. There are also journals laid about the universe, which when collected provide another point-of-view of the story. 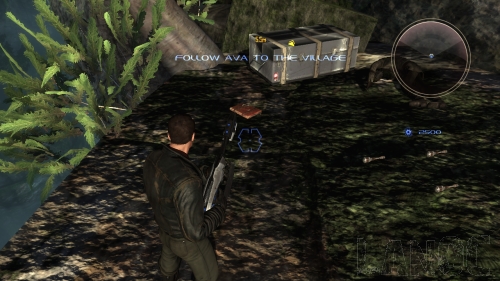 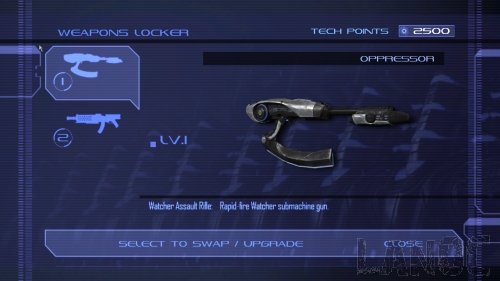 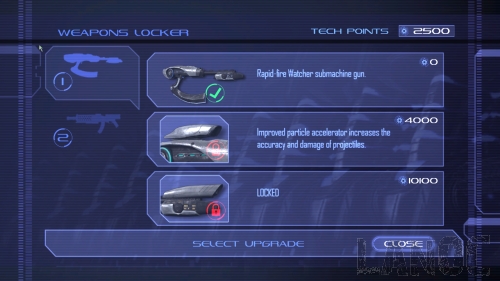 The artificial intellgence isn't anything out of the ordinary. Enemies can pick up on your position and put you under fire, but they don't go too far beyond that. At one point, I was clearly out in the open crouching, and after a hostile finally fired at me, it would consistenly fire at the same spot above me, though there was nothing between it and I. This isn't to say that firefights are difficult, however: enemies are usually released in groups, and larger enemies are often equipped with more weapons and tactics than the run-of-the-mill grunt who was unable to hit me. I should also say that the majority of those common enemies had no problem hitting me. 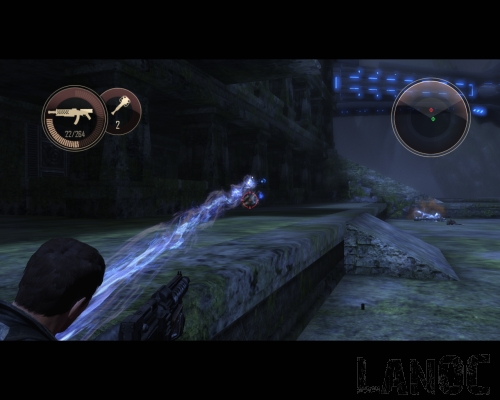 Dark Void has a great storyline driving the gameplay, though the first few hours may be a little confusing, leaving the player feeling as though he's missing something. All is revealed in time and being in the dark is almost worth it once you're let in on the secret. Ground combat is fairly average, though transversing the Void's multi-elevation environment is innovative, fun and it works in a pretty fluid manner. The aerial realm is definitely worth experiencing and is definitely something that fans of flight sims will take a liking to. Although those of us less adapt to the genre may find ourselves replaying instances just to get a hang of it. 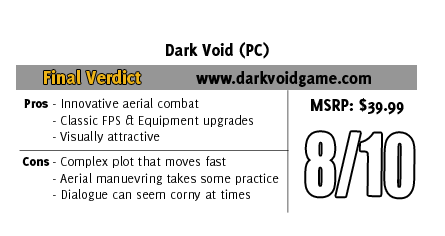 Author: Lersar
Contributing Editor / Event Staff
Adam is a big proponent of LAN parties, esports and speed-running, and helps organize our semi-annual LAN events. He has covered hardware and software reviews of a wide variety, but most content these days come from event coverage, such as other LAN parties.
Discuss this article
Log in to comment
Posts in discussion: Dark Void - PC