Having the opportunity to play a game that hasn't gotten a lot of press is a chance to make known the truth about something most people may not have tried. It's kind of like when a new flavor of energy drink comes out. I mean you don't want to waste your money on it (FYI, RockStar Cola sucks). Hit the jump as I take you through the world of Trine and let you know what makes it good, what makes it bad and most importantly why loin clothes are making a comeback.
Game: Trine
Published by: SouthPeak Interactive
Developed by: Frozenbyte
Platforms: PlayStation Network and Windows PC (Review Version)
Genre: Action/Puzzle/Indie
Release Date: 07/03/2009 (PC) 10/22/2009 (PSN)
MSRP: $19.99
Review by: Ethan

Trine begins as a narrator explains the story of the medieval setting while the player is presented with relevant art. You could probably skip past this, but I humored the writers on this one and listened in. The game then gives a short background and introductory level for each character. After all three characters have made their proper appearances to you, it just so happens that they all meet at the magical Trine stone that is oh-so-necessary to the plot. Each, of course, has their own motives but learn to be friends along the way despite them. Together they must save the kingdom and learn about the Trine stone by passing through the levels, successfully defeating the enemies and overcoming  all obstacles by using their abilities together. The story can get a little cliché at times, but it is still enjoyable. 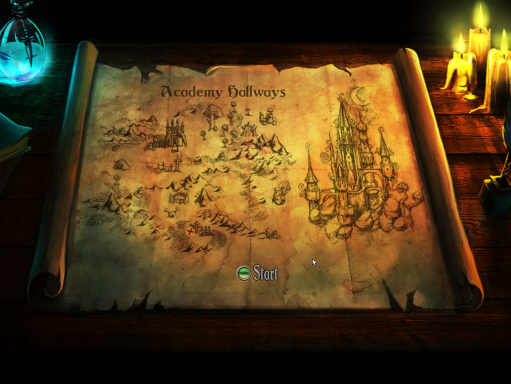 Trine is a puzzle game, and at that Frozenbyte has done a good job. The various problems a player faces in the game are absolutely enjoyable the first time around. The game was very rewarding, as well. Magical items are frequently discovered and those with the heart of an explorer won't be disappointed. As for re-playability, going through a challenge the second time with better resources (upgrades, items, etc.) can encourage creativity, but if you simply exited the game before reaching a save point, crossing those spinney gear-things over the evil chasm of death may get annoying the second time around. 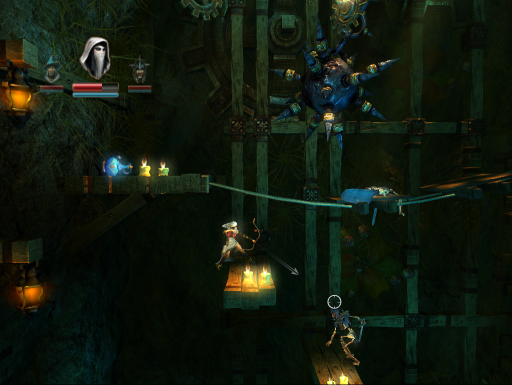 The game is much more than just endless spinning platforms, though. The undead army of the antagonist will be in your face like Vin Diesel. You'll wish they'd stop coming, but the undead provide a nice break from the puzzling (verb'd) and gives you a chance to hack-and-slash. Eventually, the skeletons will start harass you mid-puzzle, and often.

The physics found in Trine are positively amazing. Things fall as they should and swing where they would. What impressed me most, was how I once clothes-lined a jumping skeleton by hitting him with my knight, and he ever so delicately performed a mid-air back-flip. To the programmers who coded the inertia and gravity I must say good work, boys! I also shouldn't neglect how convenient the thief's robe covers her lady parts while flaunting her legs so well at the same time. It really is quite the spectacle when she's swinging around by her grappling hook. I couldn't help but wonder, "how does she manage that loin cloth so well?" 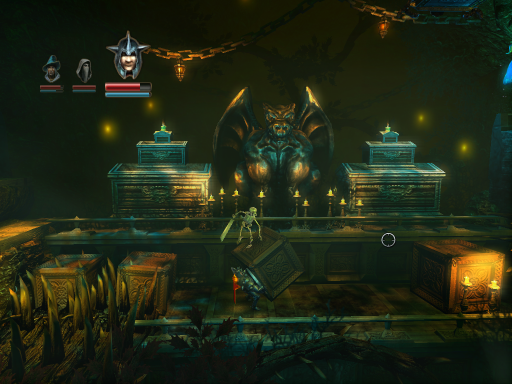 As far as what may simply be called "glitchiness" goes, Trine has its fair share. Once, I was swinging from the bottom of a platform, and the camera began to infinitely sink and I was forced to restart at the last checkpoint.
More than once did I find my character sinking below the floor of the level, unable to move and thus forcing myself to start from the last checkpoint. Much to my dismay (NOT!), it also happened to a skeleton once. Although, in his defense, the enemy AI is disappointingly predictable. Or maybe it's just super realistic because they're undead after all. Excuse or not, you'll find that killing your enemies isn't the problem, the sheer quantity of them is. There were also times I noticed when a character wasn't exactly making contact with the ground just walking slightly above it. Not critical for a puzzle game, but a visual discrepancy, none-the-less. 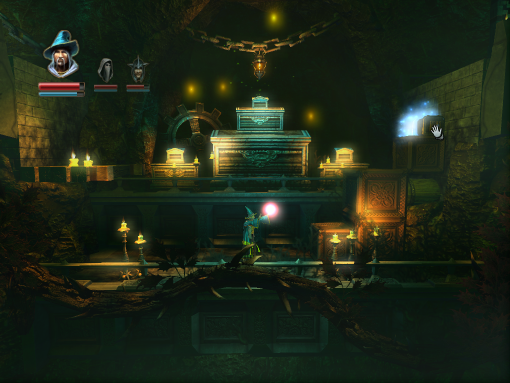 Something else I found strange was that acid rivers not only flow in dark dungeons and castles, but frequently straight through otherwise serene forests... That isn't so much a glitch as it is just strange.

When such an awesome event happens as clothes-lining a skeleton over a pit, you might think, "damn, how am I supposed to grab that experience potion now that it's next to lava?" Not to fret, experience potions earned from killing a bad-guy magically float to you. Even cooler than that, when you pick up health or magic potions with one character, it is automatically distributed across all 3 characters. Little things like this keep you from having to worry about who's almost dead. I like that in a game. Speaking of things made easy for you, the controls were a breeze. This simplicity is also shown with the HUD, or lack of. Three portraits, health and magic bar for each, clear emphasis on the selected character. Sometimes, less is more. 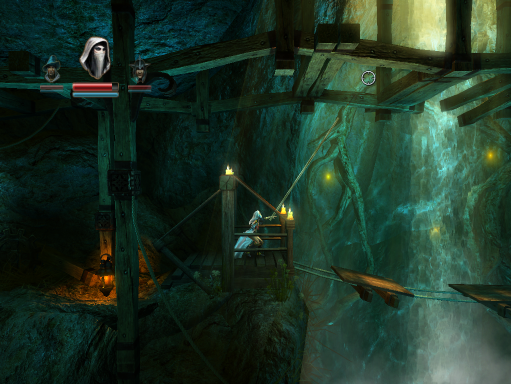 Not a lot to say here except the game is full of eye-candy. If you have a decent enough video card, the landscapes and scenery in the game can be breathtaking. More than once did I catch myself pausing just to enjoy the beautiful backgrounds and effects. The blooming flowers, bubbling lava, water careening from a cliff, and the spooky caves were more than enough to make me feel like I was there. 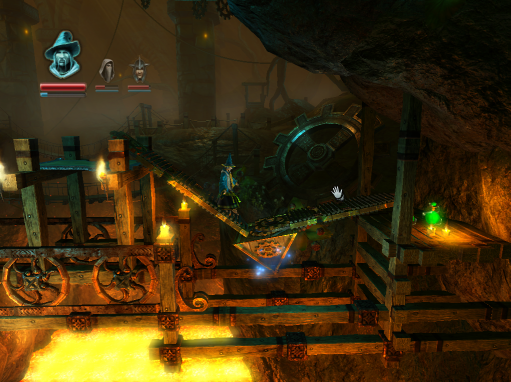 At first, the music seemed mystical and enlightening. It was aloof and bright, making the adventure seem fairly light-hearted. This feeling quickly came to an end once the music seemed to run a loop in my head. Here, quality was chosen over quantity. And, let's face it, even your favorite song loses it's magic when it's all you can listen to.

On a lighter note, no pun intended, the sound effects of the environment and in-game happenings were convincing. Birds would chirp when outdoors, gurgling water was audible enough from a distance, and caverns retained their eerie creaks. One thing that did become repetitive to me here was the skeletons. Whenever one decides to spawn, you'll hear a magical portal-whoosh type noise. It took no skill at all to keep myself from running blindly into a group of them and it made running into them that much more annoying. Something less obtrusive might have been a better choice, instead of walking over a bridge and hearing the skeleton appear on the other side before I see it. 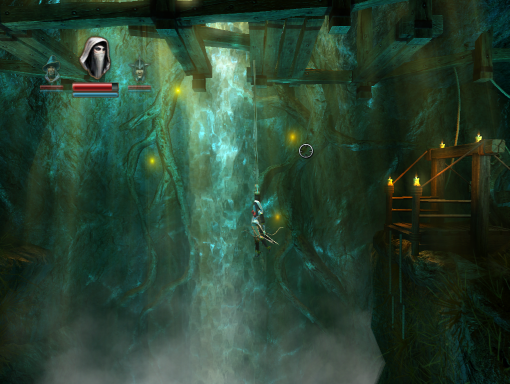 A few extra bits provided in the game that deserve mention include the cooperative game and gamepad support. The option to play with a friend was definitely something that called for an extra mode of input. All I had to do was plug in my wired Xbox 360 controller, turn it on in-game from the menu and bam! Two players. My experience with co-operative game play was less than ideal, but that could probably be attributed to the fact that my partner had no idea what they were doing (thanks anyway, MandaRawr). If I were to play with somebody that was familiar with the game, it might have been more fun. 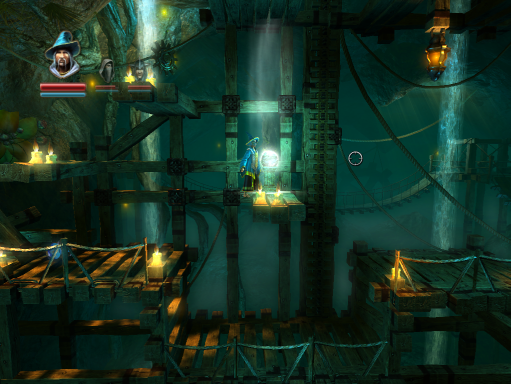 If you're tight on money and you're looking for a game to play on and off, Trine is it. It's easy to pick-up, simple to understand and its value is spectacular. The visuals are gorgeous, physics are amazing, and the game is simply fun to beat! I'm glad I got a chance to play this game, otherwise I would have missed out on a trinket of gaming satisfaction. And in reference to the length of the game, it is a trinket indeed. 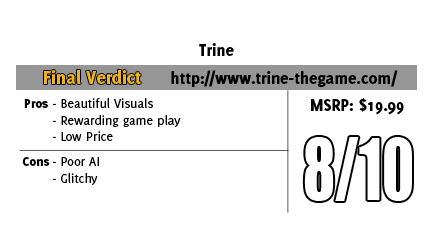 We have 1396 guests and one member online