Grab a plasma cutter and try to make it out alive in the latest survival horror game that is ripping up the Nintendo Wii! Use the Wii Remote to aim with pin-point precision as you try to escape the USG Ishimura with your mind and body intact.
Game: Dead Space: Extraction
Published by: EA
Developed by: Visceral Games
Platform: Wii
Genre: Action-Horror
Release Date: 29/09/2009
MSRP: $49.99
Review by: Tim Ashdown 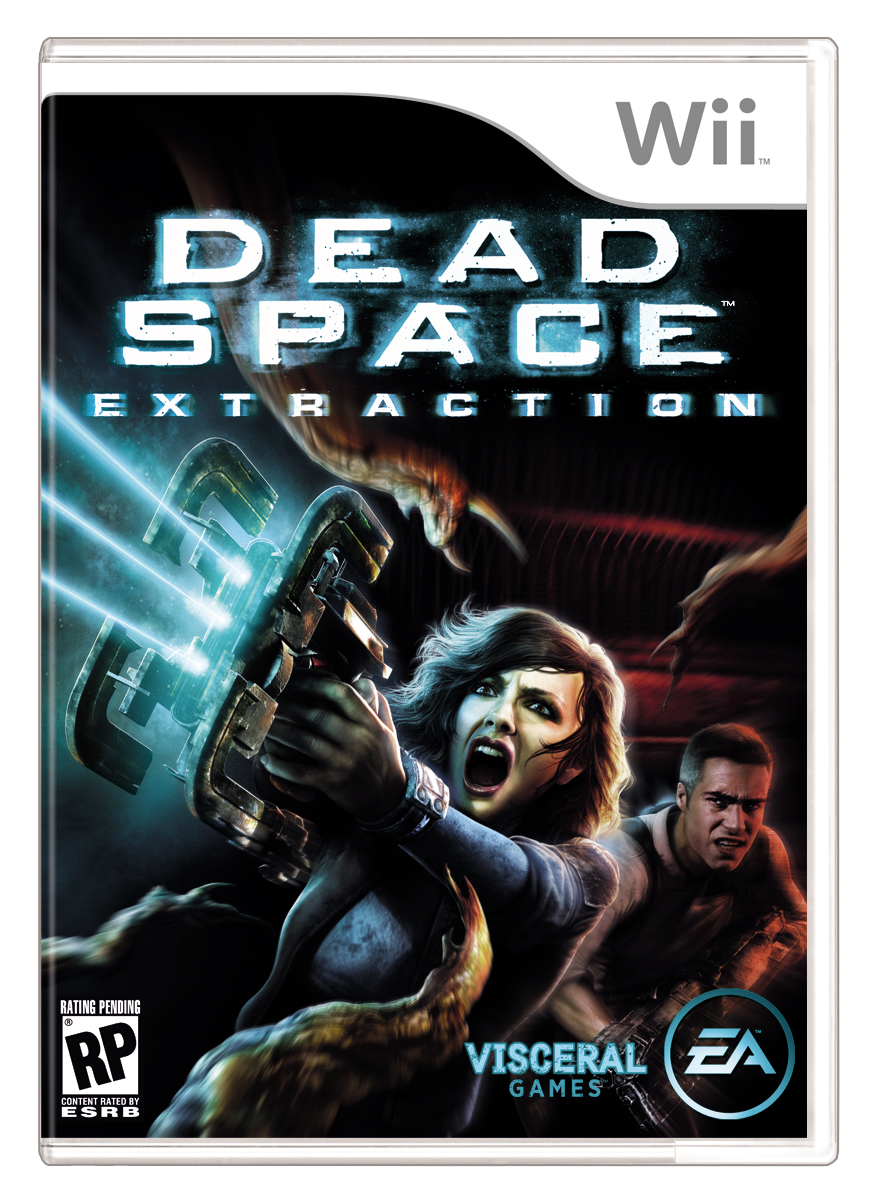 Dead Space: Extraction is an excellent reason to dust off and fire up the ol’ Wii, which if you are anything like me, has been sitting warily in the shadow of your PS3 or Xbox 360 for quite some time now. Sure we could label Extraction a survival horror or action horror game, but let's call a spade a spade. Extraction is a rail shooter, and a pretty remarkable one at that.

Extraction begins approximately one month before the events of 2008's Dead Space. You play as several characters throughout the game, each with their own unique, yet intertwined story lines. Being a rail shooter, it is needless to say that your experience is extremely scripted. However, for those of you looking for a bit of autonomy to go with your extraterrestrial eradication, there are a few puzzles and scenarios where you will need to search the environment for upgrades and supplies in order to survive. On the upside of things, with the game being in control of your movements, it allows the narrative to continue unencumbered, providing you with the full experience of the story that the developers are trying to tell. In short, everything that you see and experience in Extraction is important and intentional. 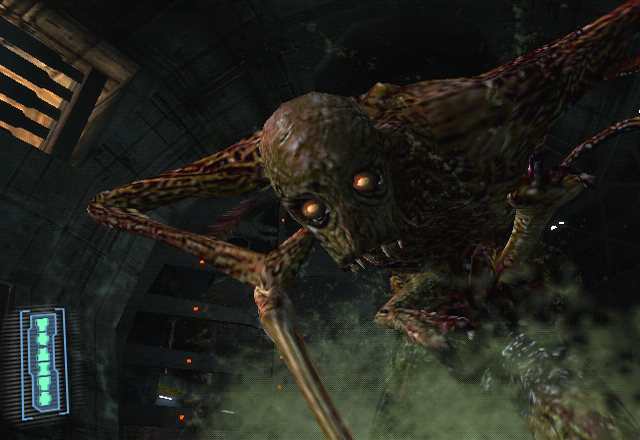 There are a surprising number of different weapons available in Extraction, however I did have trouble finding a use for some of them (such as the Force Gun or Pulse Rifle). For one, I've never seen an automatic rifle be so ineffective at dealing damage. And the Force Gun? Sure I would love to use kinetic energy to push objects around the environment, but truth be told there weren't many objects to push around. Also, your “telekinesis” ability seemed to suit that purpose better than the gun did. Luckily, the rest of the weapons at your disposal do a very nice job of slicing up your enemies. And just like the creatures in the original Dead Space, decapitating your enemies won’t put them down for good. Even a slicer without a head will continue to blindly swipe at you until you can manage to dismember it completely. It’s equally important to mention the difference between the shooting in Extraction (plentiful ammo) and in the original Dead Space (which had me running out of ammo every 5 seconds). This minor alteration in dispensing ammunition actually made playing Extraction a much more enjoyable experience for me.

The original Dead Space caught many-a-critics’ ear with its immersive, gritty and spooky soundscapes. And with Extraction coming from the same developer, it's of no surprise that the audio production is well done. In fact I would say that Extraction sounds just as amazing as the original. What works particularly well here are the ambient noises. For example, while on board the USG Ishimura you can hear gas escaping from vents, machinery clinking away and of course the hypnotic hum of a running ship. All of these sounds make you feel as though you’re actually on a living breathing ship. Better yet, once the player enters any kind of vacuum the sound becomes muted. All you hear is the haunting echo of your own terrified gasps inside your helmet. The sheer depth of the audio and the attention to detail really make you feel as though you are part of the world rather than just some piece of code moving through it. 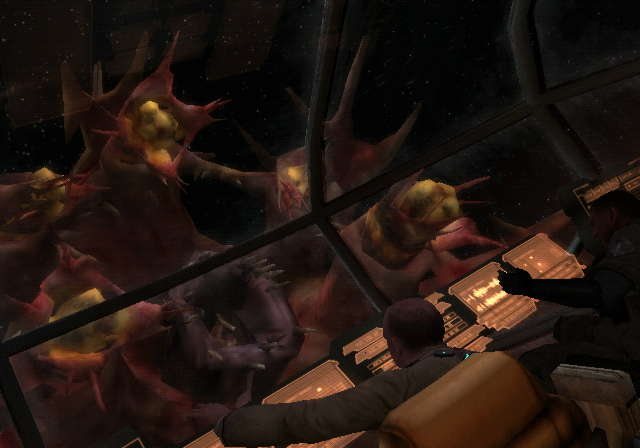 The best thing about Extraction is the extra content. For $49.99 (USD) this game has some serious entertainment value. There are three difficulties above normal, challenge modes, and multiple audio and text logs that you can read or listen to. There is even a series of comics which explores the Dead Space mythology even further. On your first play-through there is absolutely no way to follow every single path and find every extra. With each chapter in Extraction granting you a “star rating” based on your performance, this game is meant to be played again and again. Doing well in each chapter is the key to unlocking all the goodies, so if you want to see everything crank up the difficulty and get cracking. As you earn more “stars” you will find upgrades for your weapons and suit. And trust me, you will need every piece of health if you’re going to survive.

Dead Space: Extraction is an experience with enough tension and intrigue to keep you coming back for more. In the sea of unmitigated crap that is available for the Nintendo Wii, Dead Space: Extraction is a shining beacon of hope, proving that quality horror and violence can be found on the “console for kids”. So put the offspring to bed, dim the lights and get yourself a fresh change of pants. Just make sure to tell someone what you’re up to, because in space......no one can hear you scream. 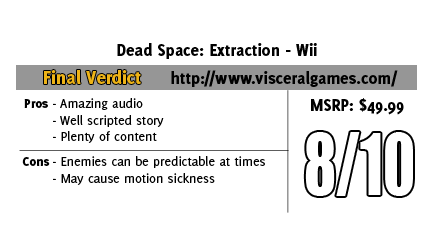 We have 1566 guests and one member online