Join Hiro as he embarks on an epic journey to restore peace to a world on the edge of chaos. Using magic, Ninja tools, and superb training mighty Hiro must save his friends and the world from an army of evil Samurai. From snowy mountaintops, to lush forests, Hiro fights hordes of enemies and several boss Samurai culminating in the ultimate fight against the Evil Samurai Warlord. From the same company that brought us the gritty Hitman games, comes a non stop, 3D, Ninja adventure that's a blast for all ages. 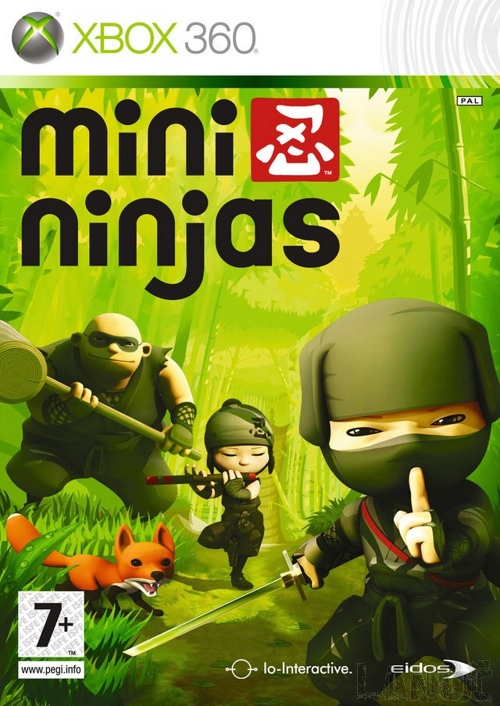 Mini Ninjas is an action-adventure game that packs a lot of fun into a 'small' package. From the viewpoint of six different mini ninjas you take on the evil samurai warlord in order to save the world. Each ninja has their own unique skill set allowing the player to approach the game with any play style. As you progress on your travels, you'll meet new friends, learn new skills, explore a variety of areas and engage in non-stop action, all while controlling an ever-expanding group mini ninjas.

The storyline is pretty standard and linear as far as action\adventure games go. An old Ninja Master senses a great disturbance in the balance of nature and begins sending his most trusted students down Ninja Mountain and out into the world to investigate. But with each passing season, the ninja students do not return. After a long and troubled period of waiting, the Ninja Master sends his final two students, Hiro and Futo, to rescue their friends and investigate the source of the environmental disturbances. 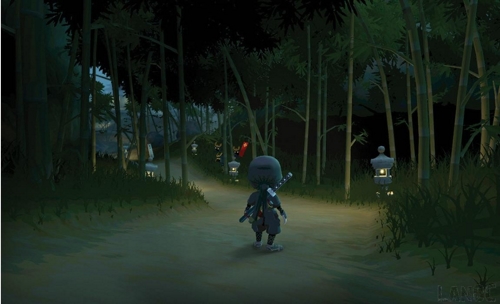 The gameplay is intuitive and fun. While it may be simple at face value, it can become quite engaging sneaking around towns, stealth attacking foes, switching between ninjas at will, using various ninja weapons to aid you, and last but not least throwing around some magic spells. While it is possible to rush from start to finish quite quickly and not do any of the little things in between there are numerous items to be collected: various secret areas that hold ingredients, hidden jizo statues, and secret shrines where Hiro can learn the ancient ways of magic.

The game has a very rich style to it. Some of the visuals in this game are surprisingly breathtaking, all are clean, smooth, and pleasant to look at. While the graphics are comic in appearance, they still look excellent. I encountered no graphical errors or glitches during my play through. On top of that, the animation is superb in and out of combat, all of it is seamless and smooth. The aesthetic appeal of this game is wonderful and rich in Japanese culture. The setting couldn't be more appropriate for a ninja adventure.

Much like the rest of the game, the controls are straight forward, easy to use, and well laid out. My only concern here is that the auto targeting system built into the game can sometimes become a bit of a hindrance more than a helpful aide. On more than one occasion I found my ninja charging directly into an enemy spear-point instead the defenseless enemy I wished to hit near him. Outside of the occasional targeting mishap, combat, combos, and spells all executed with smooth animation and grace. Combat is particularly enjoyable; between the six different ninjas and all of Hiro's spells, fighting enemies never becomes stale. 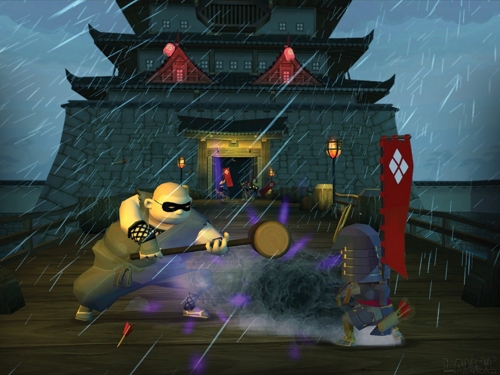 One of the most overlooked features of today's games is the audio. I thoroughly enjoyed the soundtrack to this game as well as the sound effects. Everything was appropriately Oriental in sound, and somehow even though I was bouncing around hacking and slashing Samurai from one side of the screen to the other, the music always made me feel peaceful and at ease. The music was both soothing, and enjoyable from beginning to end. The audio coupled with the art style really made the forests, towns, and castles spring to life.

Unfortunately this game is rather short and it lacks any sort of extras. On my play through of the game, I searched high and low for as many secret areas as I could find. I picked up about 80% of the items in the game and I still completed it in about 15-20 hours of gameplay. I think it would only take me one additional sitting to find the other 20%. There is no multi-player, mini games, or extra modes. What's somewhat worse is that I found 'Hard' difficulty to be particularly easy. I feel I would have enjoyed my time more, or even played longer if the game had been more challenging. I understand the game is clearly marketed at a younger demographic, but the progression from Easy to Normal to Hard really should be steeper in my opinion.

This game caught me mostly off-guard. I went in expecting a simple children's game, and what I got was a thoroughly enjoyable experience for any age or skill level. The enemies, gameplay, bosses, characters, and combat were all memorable and fun in every aspect. On top of that, the game looks and sounds great. My only real complaints are that I wish it lasted longer and there was an extra mode of difficulty. 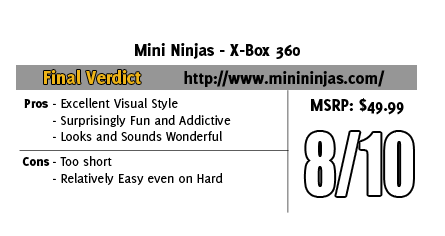 You might call him obsessed or just a hardcore geek. Wes's obsession with gaming hardware and gadgets isn't anything new, he could be found taking things apart even as a child. When not poking around in PC's he can be found playing League of Legends, Awesomenauts, or Civilization 5 or watching a wide variety of TV shows and Movies. A car guy at heart, the same things that draw him into tweaking cars apply when building good looking fast computers. If you are interested in writing for Wes here at LanOC you can reach out to him directly using our contact form.
Discuss this article
Log in to comment
Posts in discussion: Mini Ninjas - Xbox 360

We have 1483 guests and one member online