Bungie has been working hard in expanding the Halo universe, and with such a following the game has accumulated over the years, it hasn't been that hard of a task. Granted, those fans were earned from the enormous success of Halo: Combat Evolved, which all credit will be given that's due, was truly a great game. From there, Master Chief has seemed to take on the role of Mario, spreading to all types of media beyond video games, including books, illustrated novels, animated series, and a rumored movie (hopefully it works out better for him than our plumbing friend). Not to place all their eggs in one basket, or perhaps to make the basket that much sweeter when it comes around, the latest two installations in the series (Halo Wars and Halo 3 ODST) have strayed from the protagonist, focusing on other pivotal moments and characters in the tale. 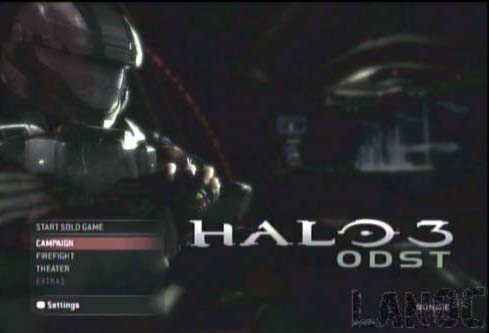 Whether it was predetermined by Bungie or simply an act of better judgment after no doubt endless entourage of hate calls and email, ODST is back to first-person shooter format, though the developer's have refused to give up their ambition of opening the minds of their shooter-stubborn fans. The game plays just as though they copied and paste that programming from Halo 3 to ODST, but your objective isn't simply gun-and-run. Instead, you'll be taking on the role of detective as you play through the eyes of the Rookie, one of the Orbital Drop Shock Troopers (or ODST) in your platoon. The game begins as your troop is responding to a Covenant attack on the Earth city of New Mombasa, an event taking place between the timeline of Halo 2 and Halo 3. Your drop zone is, of course, hot, and it doesn't take long before thing start to go awry, as they often do in those situations. As they enter the city, the drop pods are attacked and the entire squad is separated among the city. Rookie awakens from his pod several hours after the crash, and embarks out alone to find his allies. 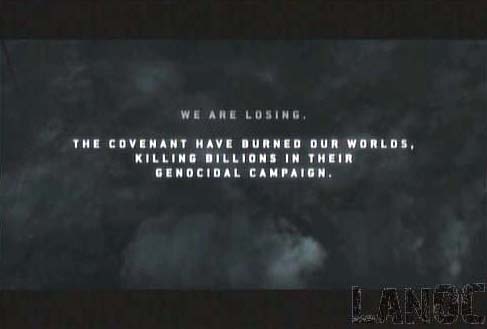 The opening narrative of Halo 3: ODST

This is where the game makes its pivotal change from main title Halo 3 to expansion title Halo 3 ODST. You are merely a solder in the UNSC, not a Spartan like Master Chief. You have no over-shield, no increased jump ability, and no advanced warfare tactics (which means no dual-wielding SMGs). Naturally, this makes your survival in the alien-infested city all the more challenging. During your rendezvous mission, you'll encounter several familiar Covenant faces, including Grunts, Brutes, Chieftains, and Hunters. You'll also get the opportunity to use many of the series' staple vehicles, like the Warthog and the Scorpion, as well as the Covenant's Ghosts, Wraiths, and Banshees. And yes, you'll have to take down a couple Scarabs. 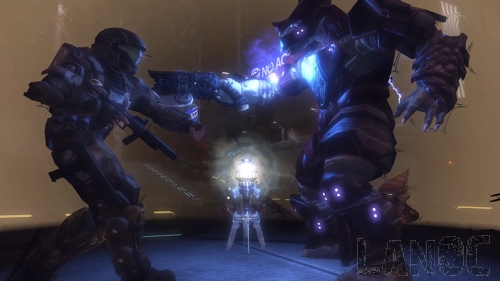 While anyone who play Halo 3 will be more than comfortable with the control scheme, as mentioned before ODST has taken on the form of a detective game as well. Your objective is to re-unite with your missing squad mates, and you'll do this by exploring the streets on New Mombasa and finding clues left behind by your now absent platoon. When you find one of these clues, you'll be launched into a flashback sequence unique to the item and what happened to its owner; this is achieved not only with dialogue and cinematics, but also by shifting your control to that specific character, and allowing you to play as him up to a certain event. Afterwards, you'll be returned to the Rookie, who with new knowledge of what has happened can progress further in his search.

Bungie wastes no time introducing characters, which is one of the downsides to this game. ODST was intended from the beginning to be a filler game between Halo 3 and the release of Halo Reach and to the day of its release lived up only to an expansion, though you'll pay full game price for it. The player is being introduced to an entirely new cast of characters, new area, and new objective, and consequently doesn't get the opportunity to bond with the heroes that Master Chief has enjoyed through three mainstream titles. So, try as Bungie may to have some emotional moments, there's just too much going on in the first play through to care much about sentiments. Unaware of their approach to the game, the first flashback is nothing but confusion, a combination of blurry screens and loud dialogue accompanied with no explanation of what the hell is going on. You'll begin to piece it together, but if you're not careful you'll miss one line of crucial information trying to figure it out. The story comes together a little more with every clue, and a 'mission' is defined by Rookie's search for the item and the play through of the flashback. These memories aren't set in stone, however; though there are tiers that can only be accessed once you've collecting a certain amount of clues, some can be collected in any order. For instance, one may not become available until a certain three are gathered, but those three can be sought after in any order. 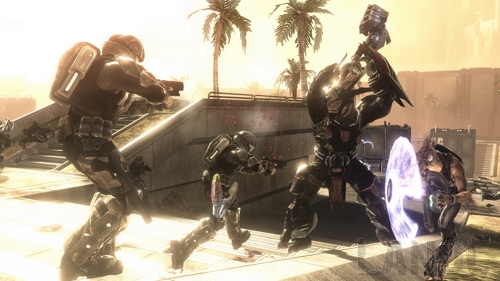 Three of us bought the game at a midnight release, took it home, and beat it on the first play through (on Heroic difficulty) in seven hours. There are multiple difficulties to provide some sort of replay value and achievements corresponding with each. ODST sports a total of 47 achievements for a possible total of 1,000 gamer points. Now before you decide that Bungie has quite warranted charging a full game price for such a short expansion, ODST also includes multiplayer modes, from campaign completion to the new 'Firefight' mode.

Firefight mode is infact one of the greatest redeeming factors in ODST. You and up to three friends choose a map and difficulty, then begin in a pre-set area that will be used as a home base, stocked with medical packs and ammunition. It's not a safe home base; enemies can enter and attack you, however it does provide narrow corridors and rooms to help you fend off the Covenant (that is, until a Cheiftain shows up with a Gravity Hammer). The point is to simply survive, much like Horde mode on Gears of War. You'll begin the match in Set 1, Round 1, Wave 1 with Covenant drop ships carrying in Grunts and Jackals, and providing cover fire so you don't rush the aliens and win too easily. From there, you'll need to dispose of most or all of the enemies for Wave 2 to launch, this time including a few Brutes. This goes on, increasing in difficulty (to the point where you get several Hunters, several Cheiftains, countless Brutes, and unimaginable Grunt and Jackal numbers. Some levels even include vehicles, so you may have Wraiths firing shots from every corner. 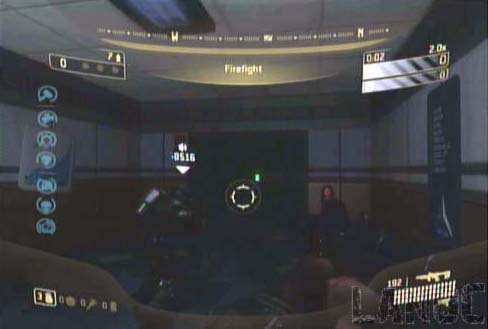 Beginning of a Firefight round 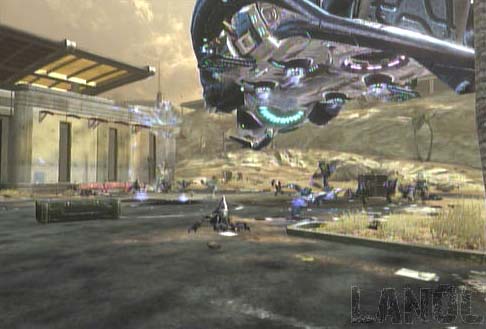 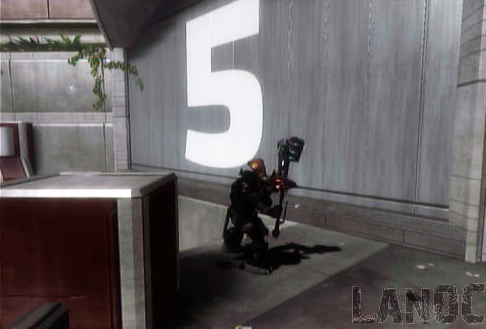 One of the many Cheiftains tracking down the troopers

All the while,you're trying to stay alive (between two of you, for example, you'll only have seven lives), conserve ammo (there is a limit provided, the rest you have to pick up), and horde health, since only about 4 med packs are provided. At the end of each Round your base will be restock with some ammo and med packs, and you'll be rewarded with extra lives. If at any time your partner dies and your out of lives, the 'Last Man Standing' can survive the current wave by himself and achieve the Hero award, reviving the fallen ally. 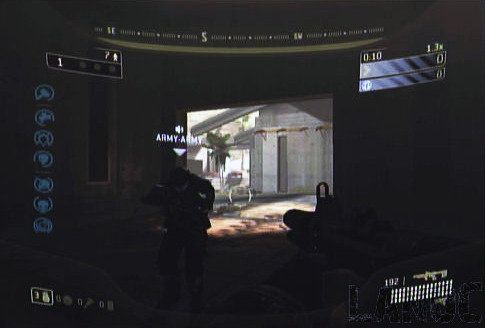 Partner about to embark... 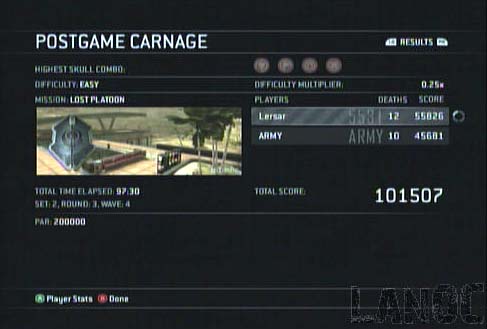 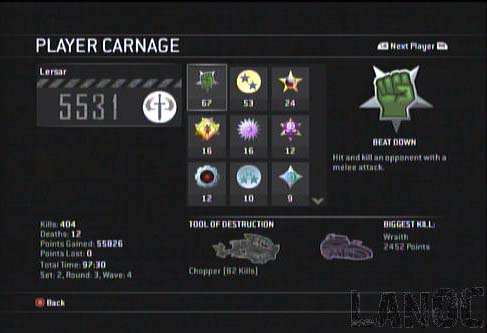 Firefight is a great mode with several maps and the potential for Bungie to develop more and release them on XBL. Achieving Set 2, Round 4, and Wave 3 took us almost two hours, which flew by without noticing at all. 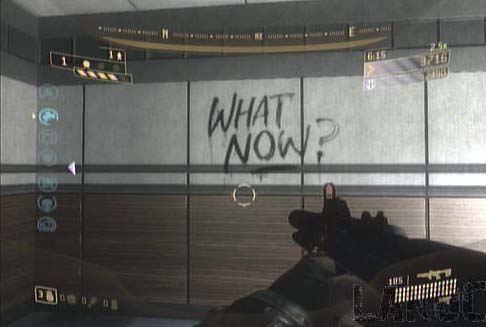 The graphics of the game are what you’d expect from Halo, almost a mirror of Halo 3. There are a few minor improvements, but not nearly what you’d expect after two years passing. The environment looks beautiful, with no glitches encountered on our play through. The voice acting isn’t anything Oscar-worthy, but it’s not painful to listen to, either. Voice sync is fairly accurate with the in-game models, though their design, the face especially, was one of the graphical areas that could have seen improvements. This is only really noticeable during cut scenes, but even then one wonders why they couldn’t have rendered a CG cinematic to take the place of actual game graphics. It’s not a huge issue, just one of the little details that give the player the impression that the game may have been a little rushed. 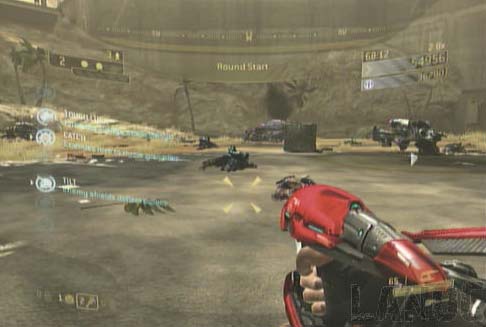 Calm before the storm, between rounds

The sound is another problem area at times. The musical ambiance during play is an amazing score, and performed in an attractive style. Moments of serenity, such as simple traversing the streets, are met with a calm, poignant track while moments of conflict, such as the engagement of a freshly dropped Brute squad are accompanied with an upbeat, strong battle theme. Sound effects seem flawless as well; from reloading a gun to hearing the amount of effort it takes Rookie to swing the Gravity Hammer, in the form of grunts. The only place where the audio quality seemed to lack was during spoken conversation (of course one of the more vital aspects of the sound genre). The voice actors seem to speak fast, and running through a surround system it was still difficult to catch what was being said, warranting for subtitles to be switched on. 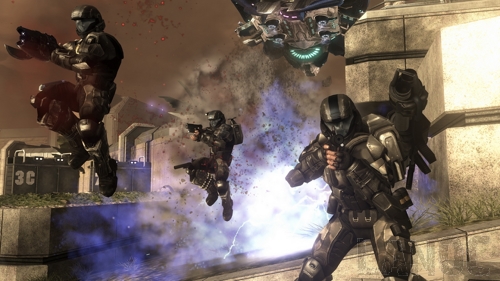 ODST did, however, see one major improvement in game play. If you’ll recall from Halo 3, when you would enter what the game considered a new area, you would freeze in a moment of lag while the game rendered the environment. You’ll still encounter the “Loading…” message in ODST, but the transition is made seamlessly.

Halo has always been strong in multiplayer, and ODST delivers well on the standard set by its predecessors. Along with the game disc, retail copies include a separate Multiplayer disc that contains the entire multiplayer experience from Halo 3, including the original maps, all the downloable maps, and the Forge feature. Along side the Firefight mode, ODST delivers endless hours of multiplayer potential.

Overall, the game is worth playing for sure, even the campaign, though its definitely not the main attraction of the game. Most of the meat to ODST is in the Firefight mode, which is, admittedly, a blast to play hour after hour, and tust me, they'll go by quick. With addition of the Halo 3 multiplayer package is a nice touch, especially so for those who are yet to own the original, and even for those who have neglected to download the new multiplayer maps, for whatever reason. Halo 3 ODST is, of course, an expansion and one worth owning, though at full game retail price, you may wait for this to drop a littel, quenching the thirst through rentals. 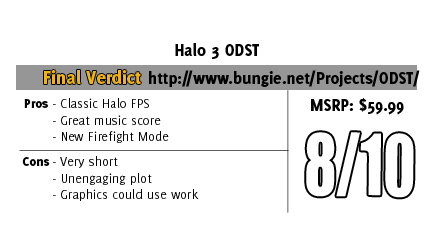 Author: Lersar
Contributing Editor / Event Staff
Adam is a big proponent of LAN parties, esports and speed-running, and helps organize our semi-annual LAN events. He has covered hardware and software reviews of a wide variety, but most content these days come from event coverage, such as other LAN parties.
Discuss this article
Log in to comment
Posts in discussion: Halo 3: ODST - Xbox 360