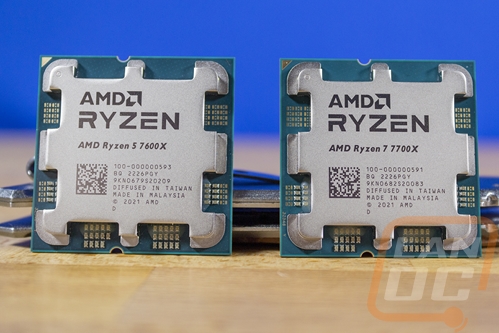 On March 2 2017 we published our first of many Ryzen reviews and AMDs long awaited CPU refresh and new at the time AM4 socket turned the CPU world on its head quickly accelerating what was a very stale CPU market. Just the last two years alone have felt like 10 years making the 5 and a half years from that launch to now feel like it has been 20 years. So much has changed with one exception, AMD has still been using that same AM4 socket. Well, tomorrow Zen 4 will be available for sale, and along with it the new AM5 socket as well and today I’m taking a look at the new Ryzen 5 7600X and the Ryzen 7 7700X CPUs to see what they are all about. So let’s dive in and check them out!

While we have just the Ryzen 5 7600X and the Ryzen 7 7700X on the bench today for testing the new Ryzen launch does include more than just those two CPUs. In fact, they are the bottom two being launched today. AMD’s new 7000 series of CPUs is launching with four CPUs total, two Ryzen 9 CPUs with the 7950X and the 7900X and then the Ryzen 7 7700 X and Ryzen 5 7600X. The 7000 series is the introduction of the Zen 4 architecture and with that the new AM5 socket as well.

Zen 4 is an exciting launch because of its focus from the start on improving gaming and creation performance and some of you may remember the gaming performance struggles back with the original launch of Ryzen that AMD has slowly made improvements on. AMD's announcement talked about the 13% improvement in IPC compared to Zen 3 CPUs and to go with that huge clock speed improvements with up to 5.7 GHz max frequency being possible and all of that together giving up to a 29% improvement in single-core performance compared to Ryzen 5000 series CPUs.

The new 7000 CPUs are all built on a 5nm process which AMD poked a few jabs at Intel in their presentation about Intel’s slower move to smaller processes and they also presented a comparison of a Zen 4 core + L2 cache compared to an Intel Adler Lake Core+L2 in die size. The big thing with this is that smaller die sizes can be more power efficient and also can potentially mean lower manufacturing costs as well which means Zen 4 should be able to be competitive in pricing. Zen 4 is also integrating RDNA2 graphics in all CPUs, not just a few lower-end CPUs. I know a lot of people may not use integrated graphics in higher-end builds but it is great to have the option even if temporary. This is especially good for situations where someone needs a fast CPU but doesn’t need a dedicated GPU.

To go with the new CPUs this is the introduction of the new AM5 socket which in itself is huge news, AM4 launched with the original Ryzen launch. As the picture below points out, AM4 covered 5 CPU architectures and over 125 processors. The new AM5 socket's biggest change is to the new 1718 pin LGA socket which moves the pins to the motherboard and locks the CPU in place with the full metal hold down, no more CPUs pulling out with your cooler. The new socket is capable of up to 230 watts of power delivery and has support for DDR5 and PCIe 5.0. The new socket also has the same clip mounting setup that AMD CPUs have used for years which means a lot of coolers will still work, with the LGA backplate there will be cooler designs that used a new backplate that will need changed but overall it is great to go to a new socket, especially one that is this big of a change and have cooler compatibility. The overall package size is the same 40mm x 40mm size but the new socket means 28 PCIe lanes vs 24 on AM4. 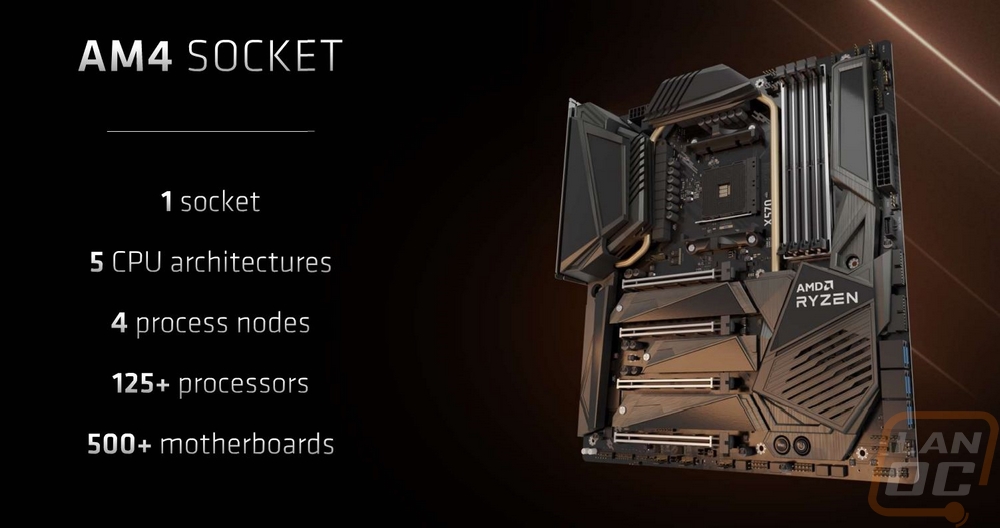 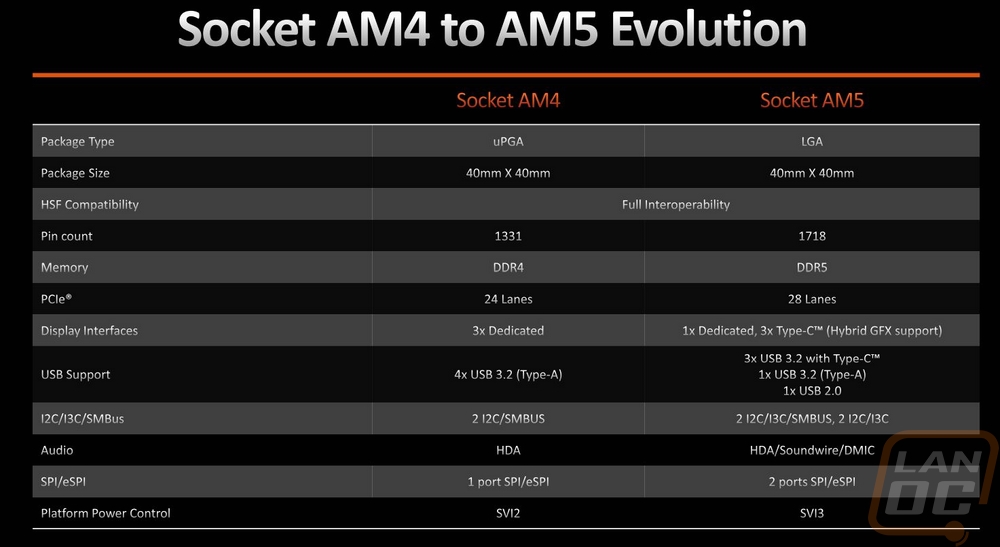 At this launch, AMD has the X670 chipset and the X670 Extreme which both share the same base chipset only the extreme designation means the board has support for PCIe Gen 5 storage and GPU whereas a standard X670 board will have PCIe Gen 5 for the storage but 4 for the GPU. In October they are also bringing out the B650 Extreme and B650 chipsets as well. All four chipsets will have the same 4x superspeed USB ports directly to the CPU, 28 PCIe lanes, 1 USB 2.0 port, 8x NVMe, and 16x for the graphics which are all on the CPU side. B650 cuts the high-speed and super-speed USB port counts in half and drops a lot of the high-end USB options as well. B650 gets 8 PCIe lanes vs 12 on X670 for things like LAN, Wifi, NVMe, etc, and goes from 8 to 4 for PCIe 3.0 lanes as well.

With the move to DDR5, AMD has also introduced AMD Expo which is memory overclocking profiles. The big thing here is that AMD has introduced this as a license and royalty-free specification which means we should see great adaption in memory in the future. They have set auto overclocking settings for the memory to keep a 1 to 1 ratio between the controller and dram frequency and with that, the new sweet spot for a memory overclocks is 6000 MHz. 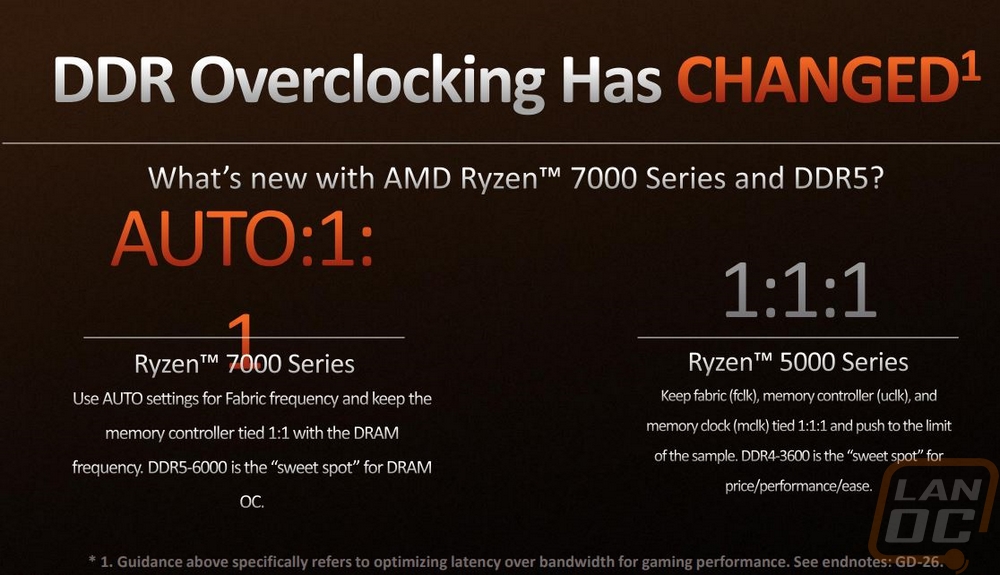 I also wanted to quickly show the review kit that AMD sent over. Unlike some past launches, the 7000 Series kit didn’t have a special box. But the kit came with the Ryzen 5 7600X and the Ryzen 7 7700X in their compact boxes that show the CPU through a window in the center of the front. They also included an Asus ROG Crosshair X670E Hero motherboard that I will be reviewing as well and the G.Skill Trident Z5 Neo memory which supports AMD Expo and runs at the 6000 MHz sweet spot with CL30-38-38-96 timings. 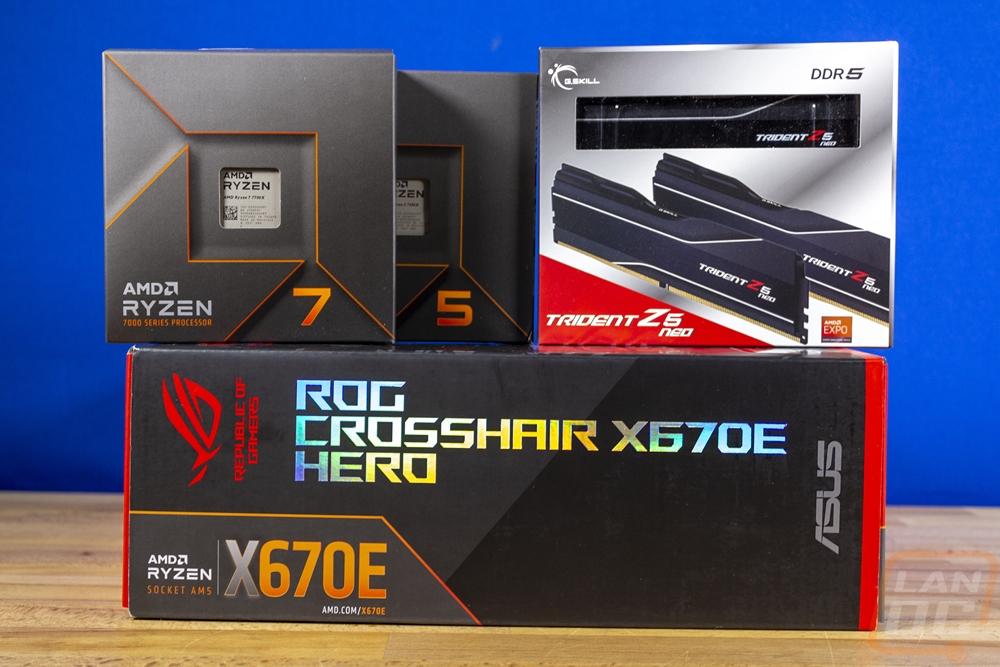 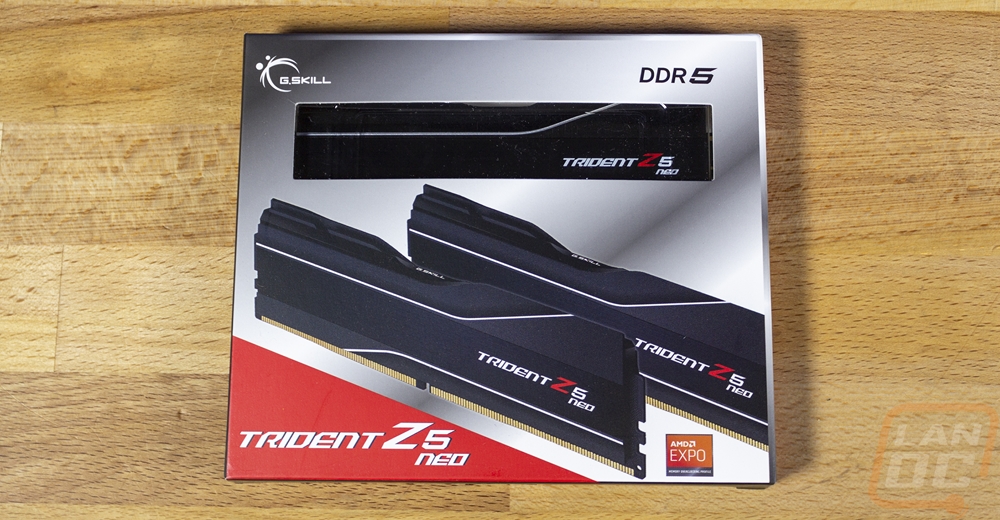 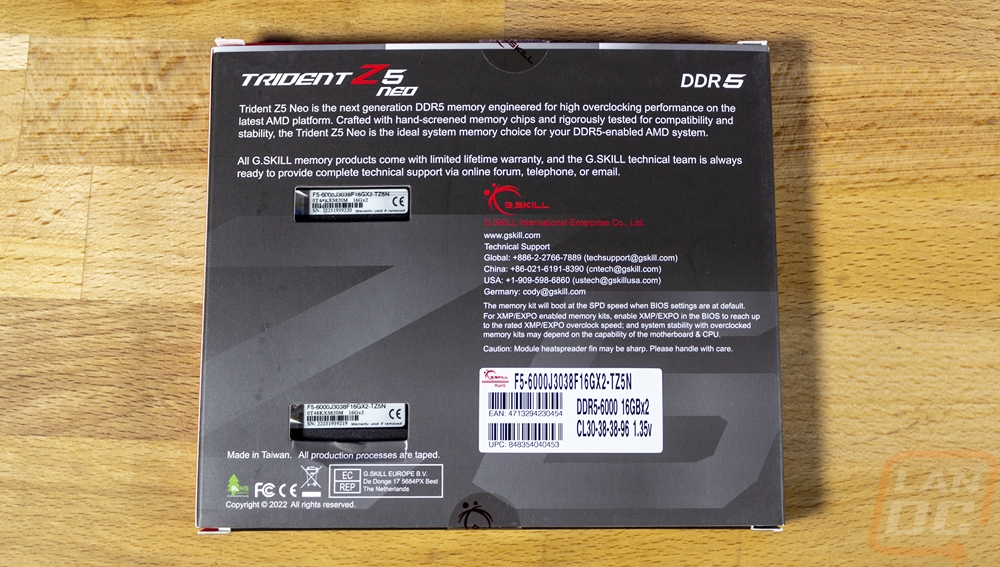 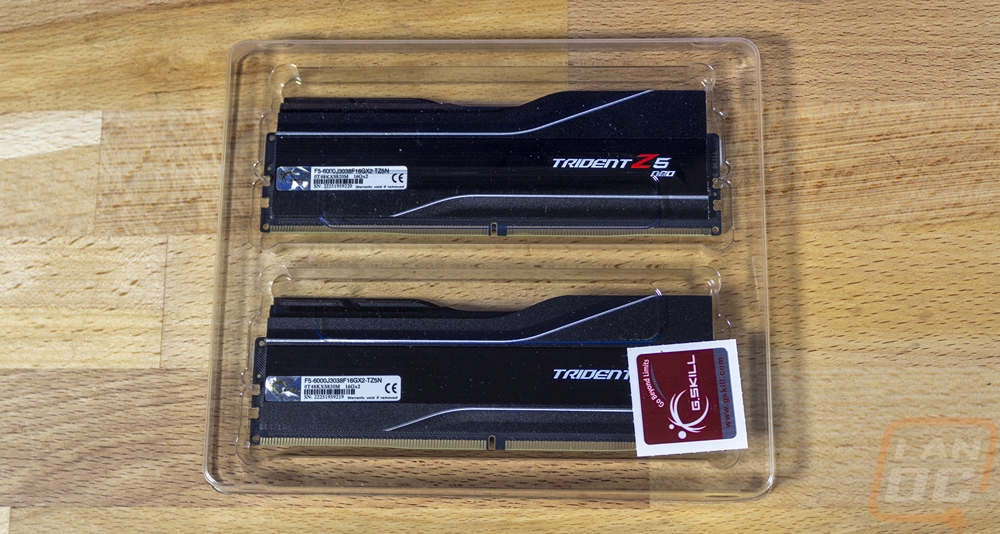 I love the look of the new AMD boxes and because they don’t include a cooler the new boxes are a lot more compact as well. They have the same grey and orange theme that all Ryzen CPUs have had and highlight the 5/7/9 that the CPU is in on the front. Then you can see the CPU model on the CPU itself through the window to confirm everything. Inside you have a certificate of authenticity paper which also has the installation instructions and warranty information. Then the CPU itself comes in a similar clamshell to past AMD CPUs only with it changed to support the new LGA socket type. 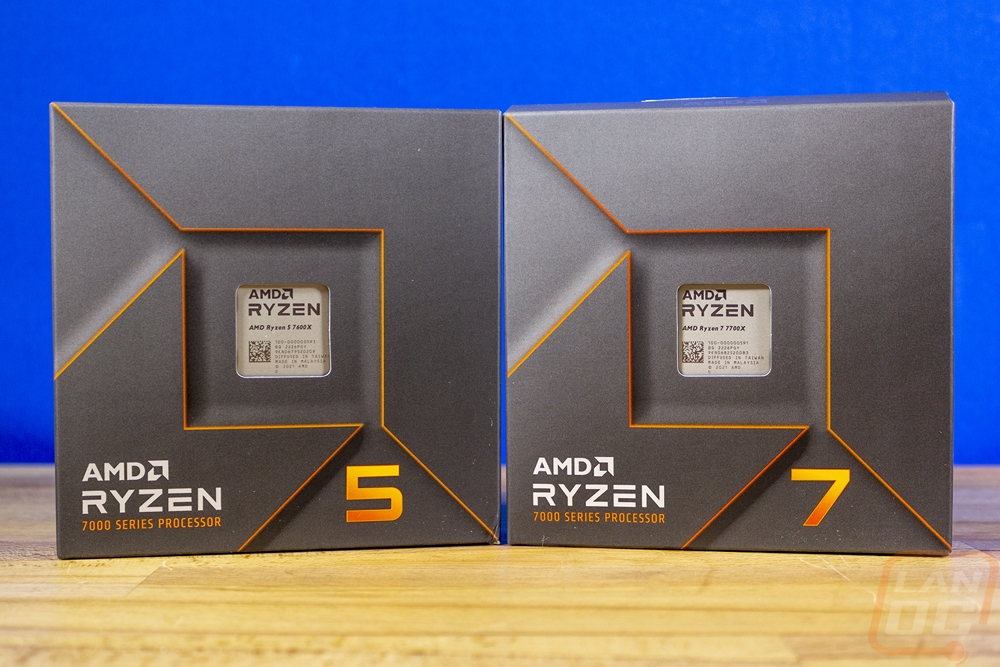 The new CPUs are the same 40mm x 40mm size but being LGA they look a lot more like an Intel CPU at first glance. The heatspreader on top though has an X-like shape which is unique and the heatspreader is much thicker than on an Intel CPU. Even with a little less heatspreader space, AMD is still etching the full AMD Ryzen logo along with the model number and other information. I’ve also included a comparison between the new CPU, an old Ryzen CPU, and both the LGA1700 and LGA1200 socket CPUs from Intel for size comparison. 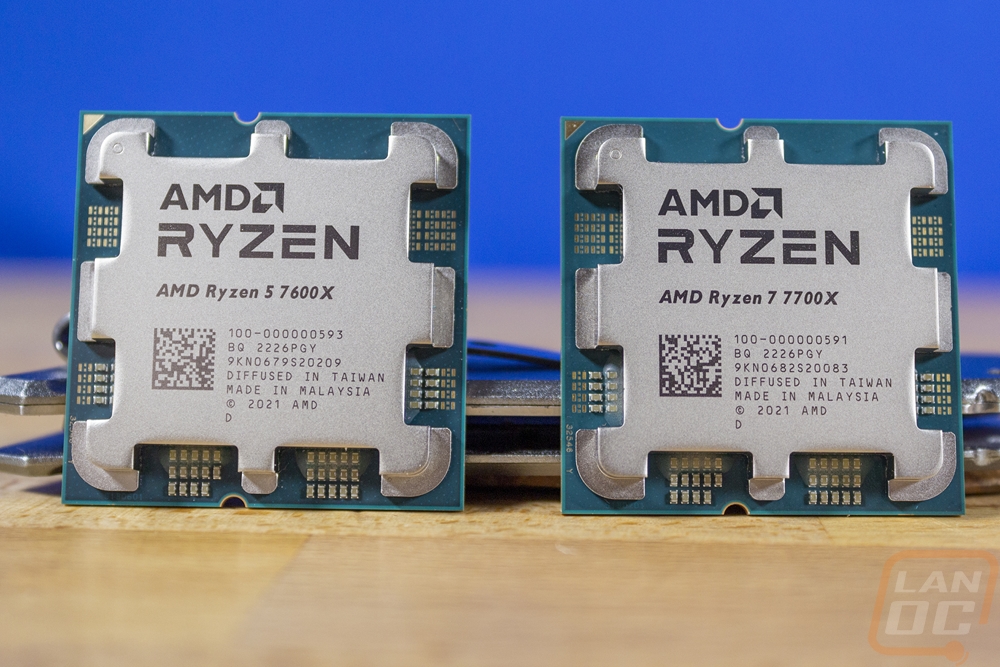 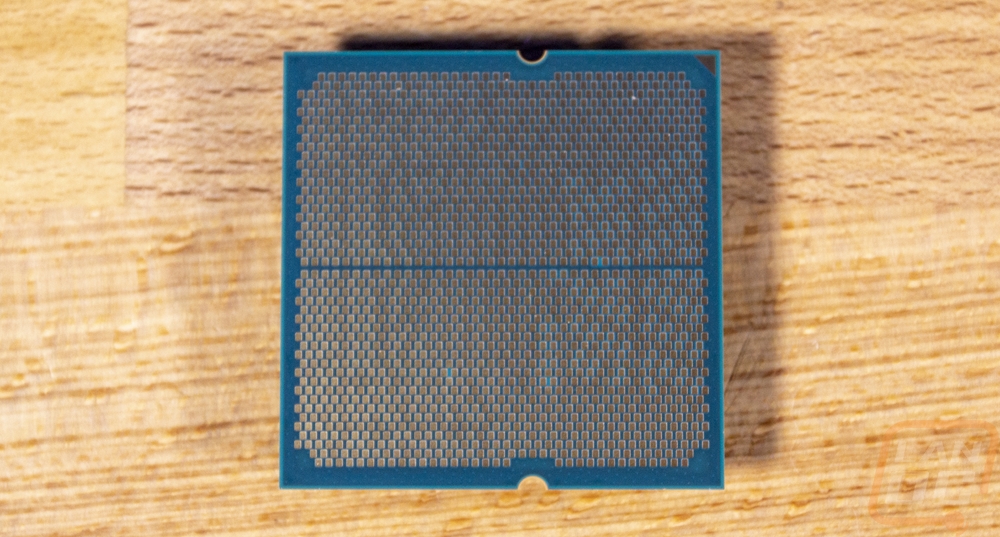 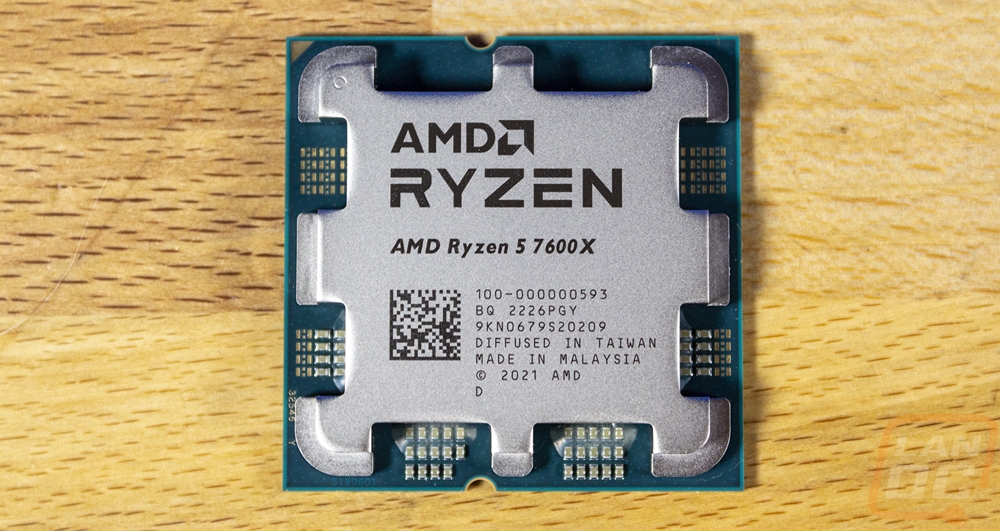 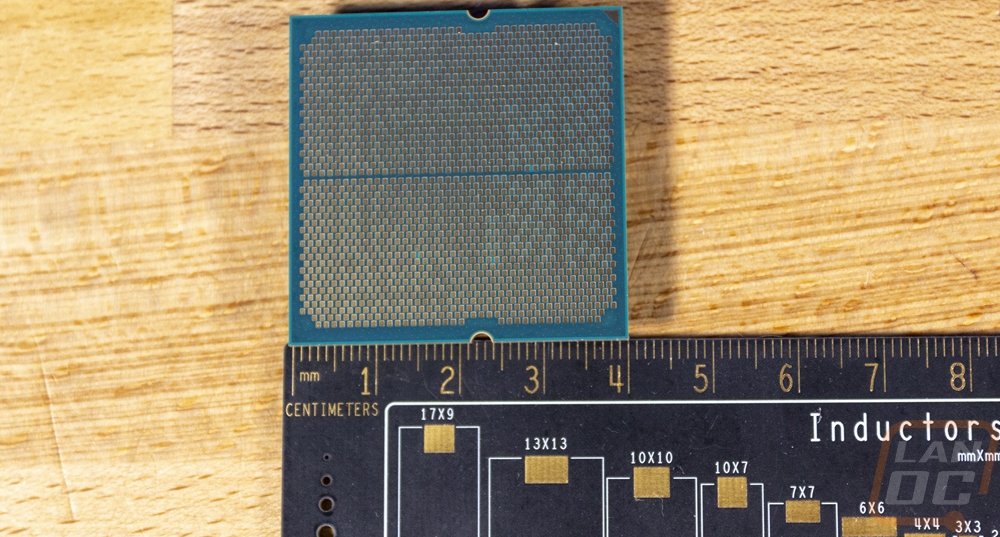 We have 1368 guests and one member online