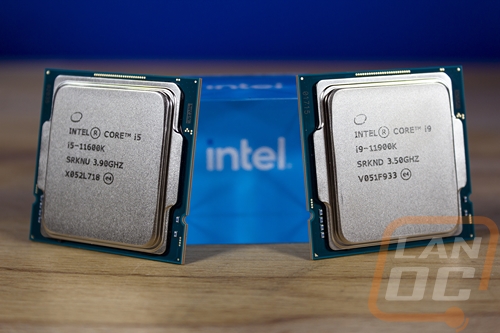 Intel’s Rocket Lake CPUs which are their latest 11th generation of their Core desktop lineup were officially announced earlier this month but they have been a bit of an open secret for a while now. There have even been CPUs available for sale way ahead of the launch so there has been a lot of information all over the place on Intel’s upcoming latest generation of desktop CPUs. Today is finally the day that the embargo lifts and we can take a closer look at the new lineup, namely the performance of two CPUs the Core i9 11900K and the i5-11600K that Intel sent over for us to test out. The competition in the CPU market has been strong and Intel has continued to push the limits so it will be interesting to see what they have in store for the 11th gen CPUs so let's dive in and see what the story is.

Before jumping into performance testing I did want to check out what Rocket Lake is all about and check out the specifications on the 11900K and 11600K that we have in to take a look at. In Intel’s Rocket Lake briefing they showed off that the new architecture is capable of up to a 19% improvement in IPC (instructions per clock) and the 11th gen CPUs have also received a long-overdue upgrade to the integrated graphics as well which can see up to a 50% performance improvement. They have also worked on integrating AI/Deep Learning performance much like Nvidia has on the GPU side of things.

The new CPUs are still on the same 14 nm FinFET build process which has been being used at Intel for an unheard of amount of time, going back to 2014 with Broadwell. With that Intel has had to get creative in other areas to edge out performance. They have focused a lot on IPC which Is what normally translates into better gaming performance and with programs that don’t focus on using up all of your cores. Memory support without overclocking is up to 3200MHz now over 2666MHz and 2933MHz on the highest end 10th gen CPUs. 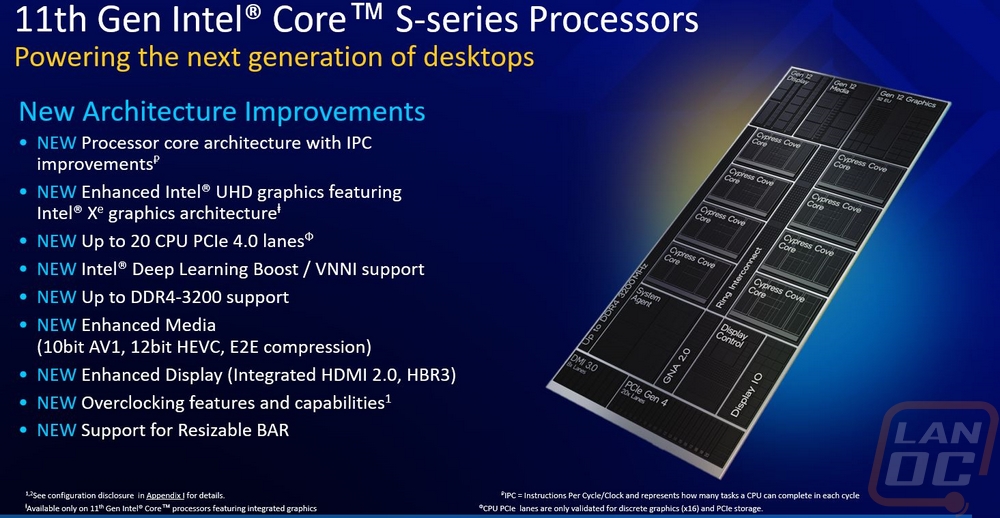 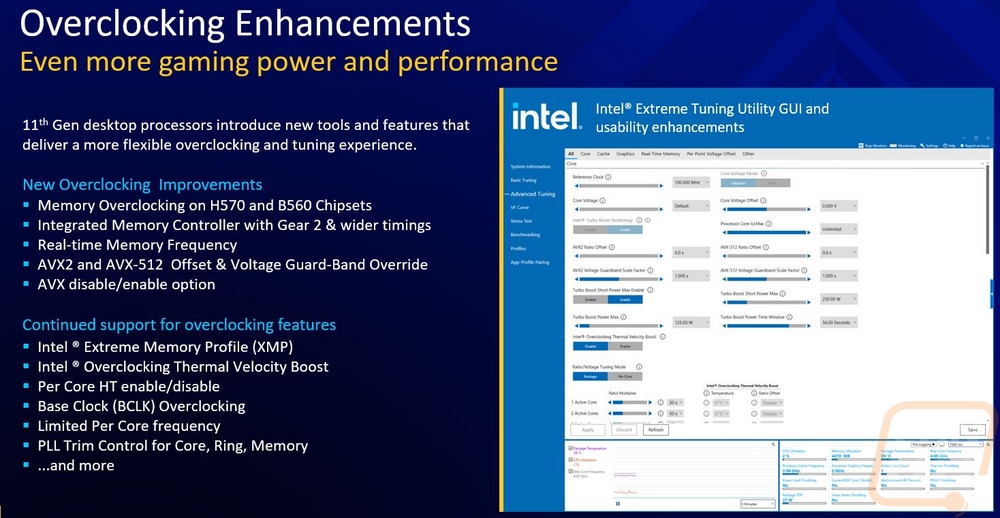 Intel has also been working on new ways to get performance out of CPUs using new boosts. They provided a really useful graph that breaks things down to show how it works on the i9’s by core. You have your normal turbo boost max 3.0 which helps overclock 1 or 2 cores. Each core also has thermal velocity boost which will attempt to overclock all cores up to 70c. Then they have adaptive boost technology which focuses on the cores past the first two that when turned on aims to get more frequency out of those cores up to 100c which is more aggressive. This isn’t turned on by default, it is a setting you turn on in your BIOS. 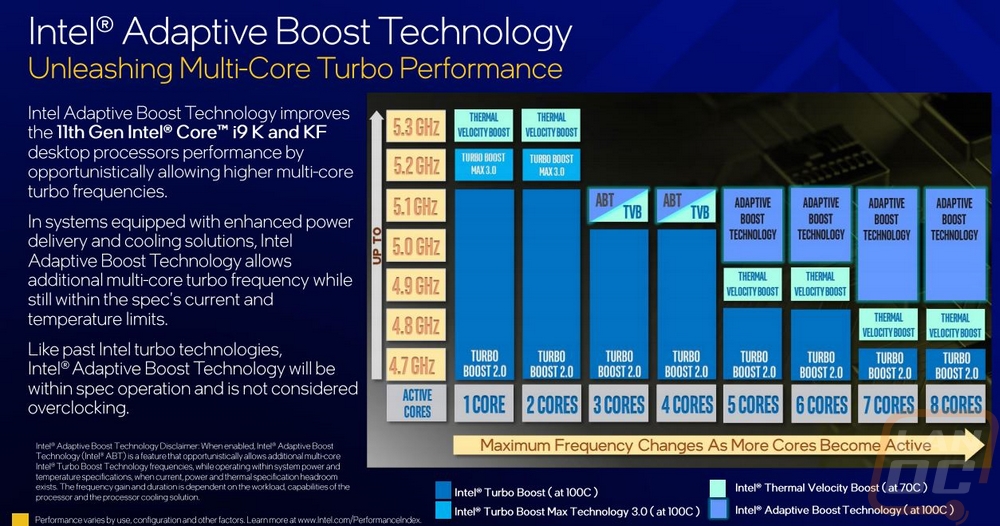 So Rocket Lake or 11th gen CPUs are on the same LGA1200 socket as the 10th gen CPUs but Intel does have new chipsets. Especially the new Z590 chipset which is the new flagship. They have added Thunderbolt 4 support for example. On the USB side of things USB 3.2 Gen 2x2 which is twice the speed of normal Gen 2 is officially supported, last generation you would only see that on some motherboards. They have also upgraded WiFi support from 6 to the new 6E with Intel Wireless AX-CNVi now on all 500 series chipsets. 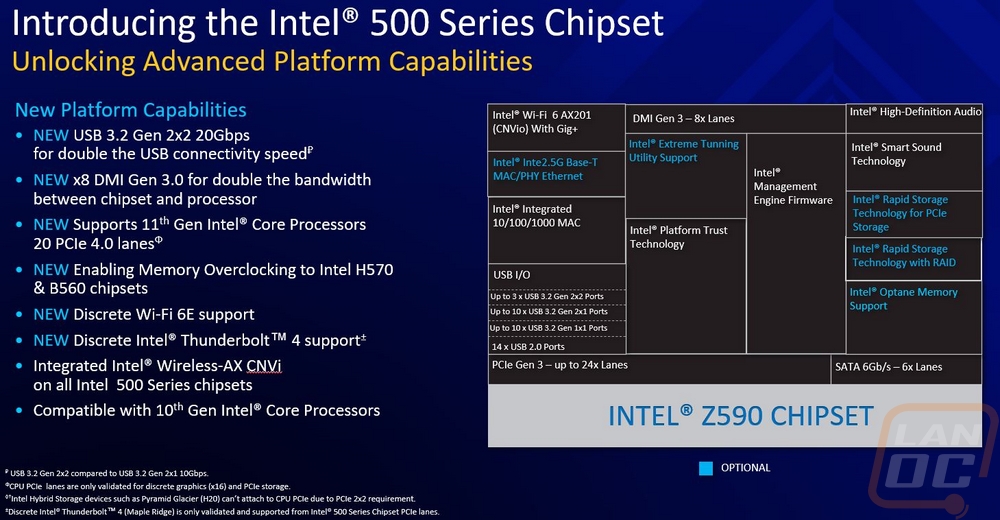 So here is a look at the full product stack with all of their RCP (recommended customer pricing) which isn’t always what we will see in the real world. Especially given the current climate with chip shortages everywhere. The i9-11900K that Intel sent over is their new flagship CPU but there is something very interesting with it. Intel has the 11900K with an 8 core 16 thread configuration. Last year's flagship was a 10 core CPU. Given the same manufacturing process still being used Intel decided to stick with 8 cores as their highest core count in the mainstream lineup to focus on the upgraded integrated video and higher frequencies. Though if you compare the 10900K, it did have a higher base clock and it matched the 5.3 GHz boost clock and had a higher 4.9 GHz all-core turbo frequency. We will find out later in testing, but I suspect that the boost clocks and thermals may be a little more reliable by dropping down to 8 cores. But it is a risky move with AMD reaching up to 16 cores on their “mainstream” socket. Intel also has options available for anyone who doesn’t want the integrated video with any CPU that ends with an F. Then for overclocking there are six models (three if you don’t count the CPUs without integrated video), the 11900K of course, the 11700K, and the 11600K. The 11700K has the same 8 core configuration only without the thermal boost and a lower but still impressive 5 GHz boost clock. Then the 11600K which they also sent over is the one unlocked 6 core CPU. All three have the same 125-watt thermal design, the rest of the Rocket Lake stack takes the 8 and 6 core options and steps them down with different base and boost clock speeds to fit into other thermal options like 65 and even 35-watt designs. The i7 and i9 models all have 16MB smart cache and the i5’s have 12MB smart cache. Intel also refreshed some of their 10th gen CPUs for the i3 and Pentium options.

So for testing Intel sent over a special press kit which included an Asus Maximus XIII Hero Z590 motherboard for testing. Then for the CPUs, they skipped sending over retail packaging, and in its place, we received a box with both CPUs displayed. The CPUs come in small labeled boxes and then sit in a foam tray with a clear cube with Intel branding on it and the Rocket logo for Rocket Lake under it. I would still love to get the retail packaging because I think the last few have been especially cool looking. This generation's box isn’t as crazy as a blue plastic die that last-gen came with. But still. 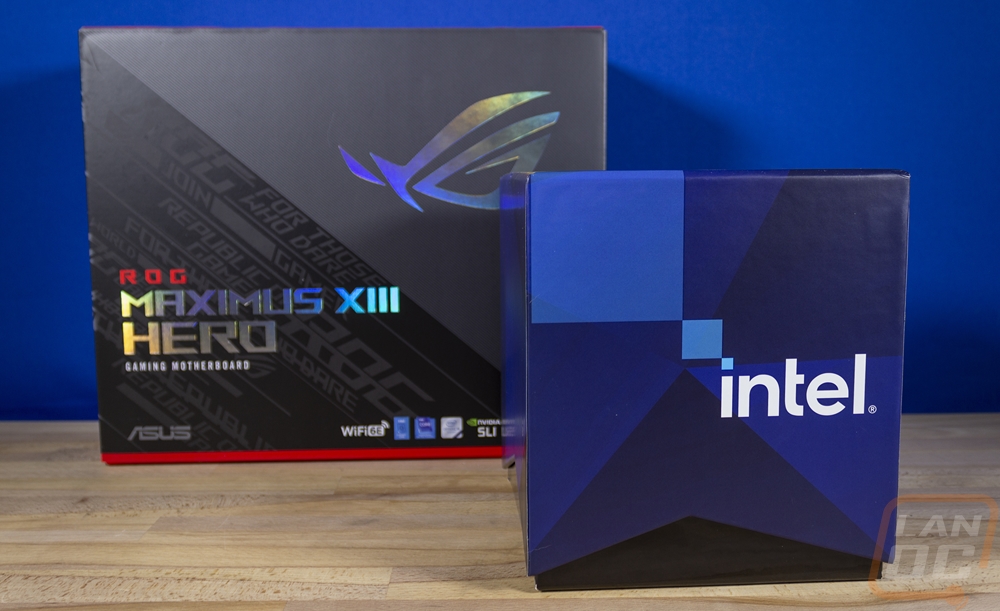 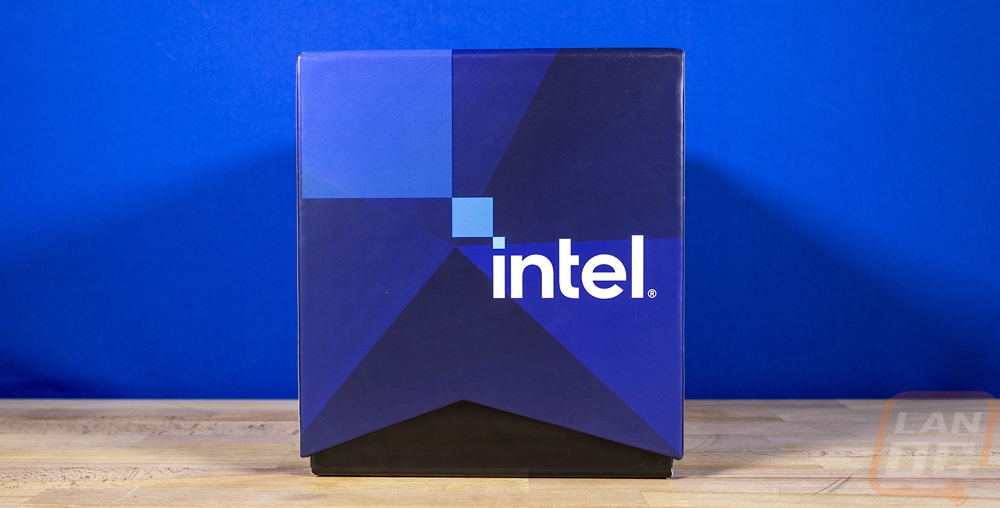 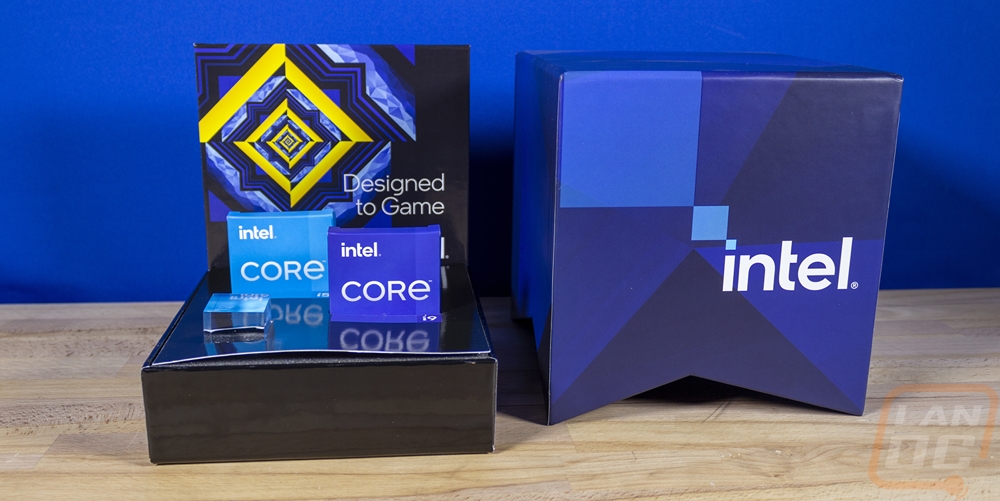 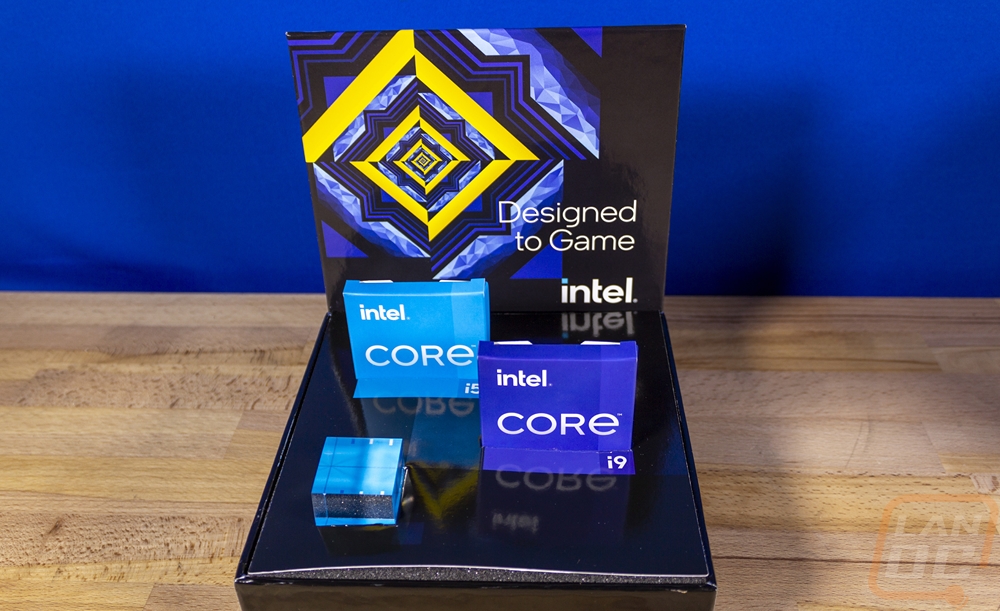 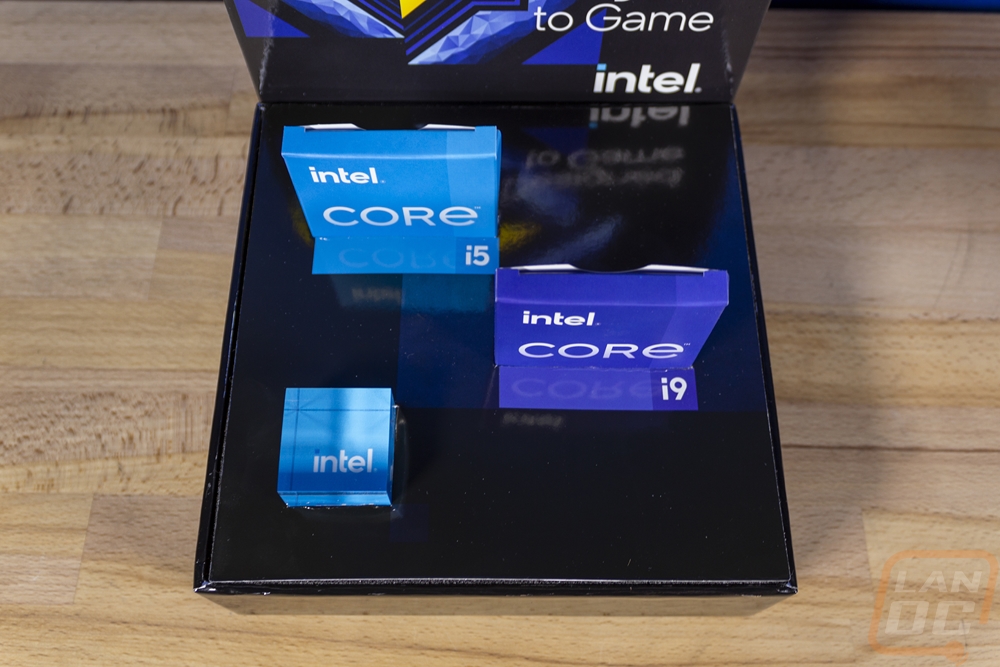 Inside everything, just like the retail packaging the CPUs still come in a normal clamshell. The only thing that also stood out to me was that these CPUs don’t have the normal confidential etching. These look like retail CPUs, much like what AMD sends out. As for the CPUs, Intel doesn’t have any fancy logos etched on the top but it does let you know that one is part of the Intel Core i5 series and i9 series then below that has the model number and then the base clock speed along with the batch number as well. Intel is still running with the same sized LGA socket as the 10th gen (LGA 1200) so these are still small and have the pins on the motherboard. 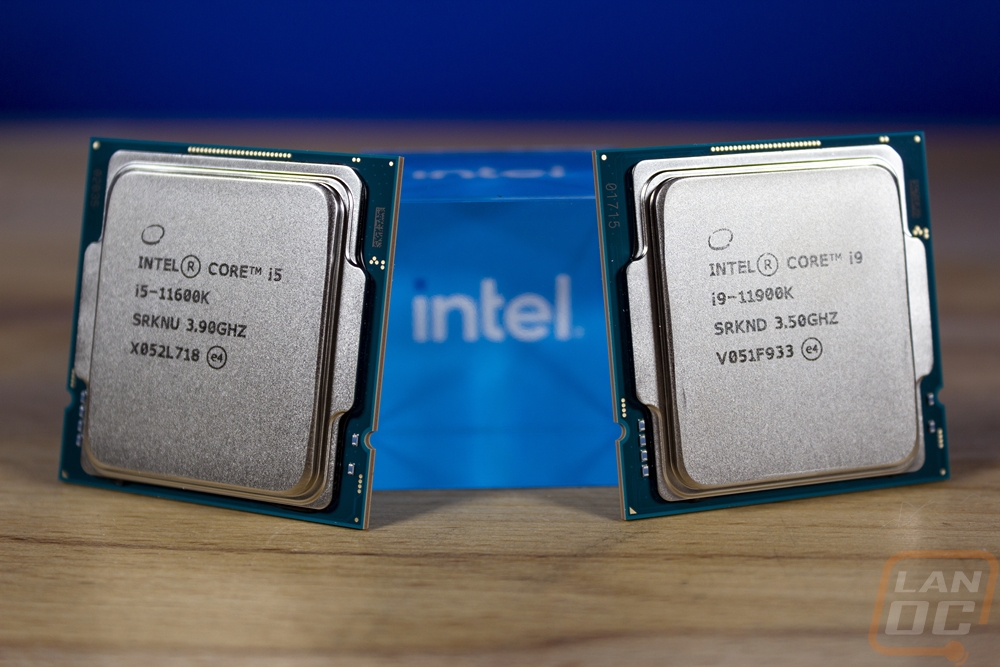 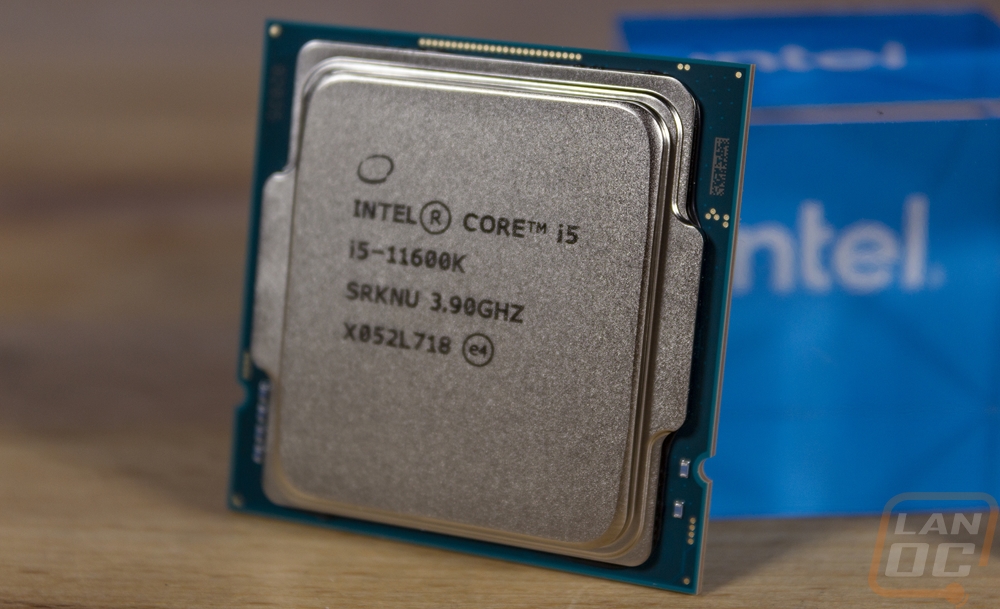 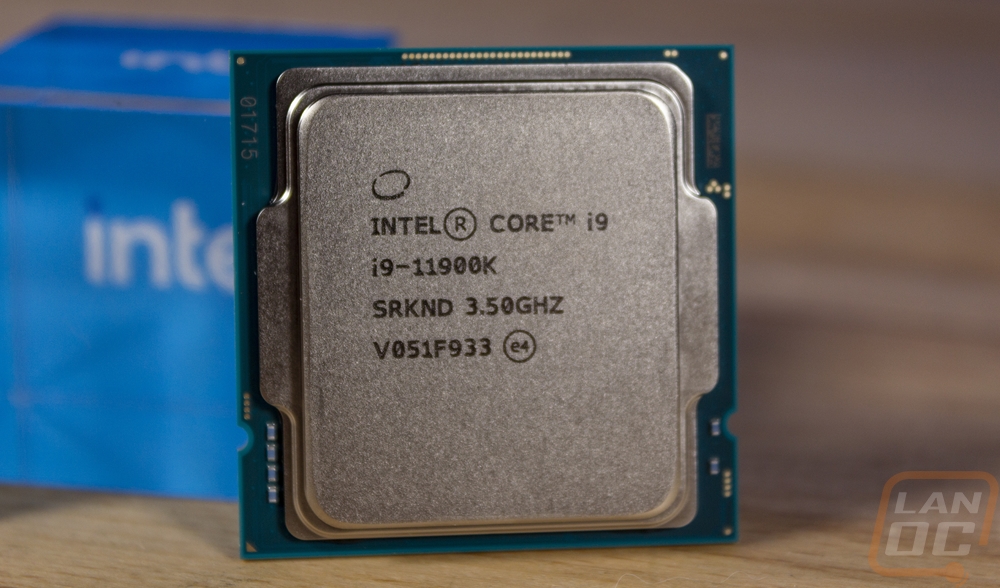 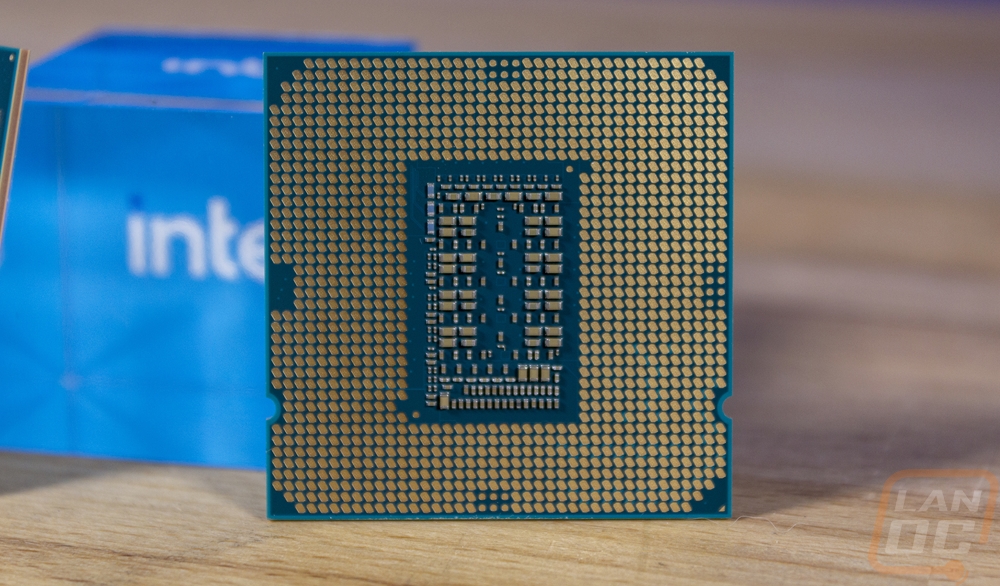 We have 1461 guests and one member online