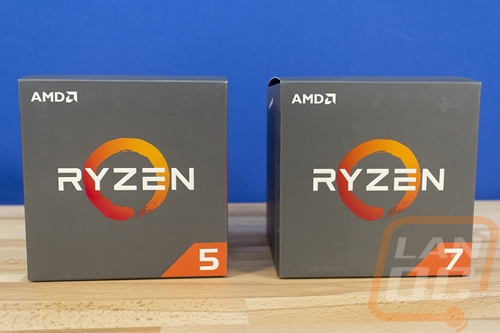 So as I expected after looking at the specifications of the Ryzen 5 2600 and the Ryzen 7 2700, the test results were interesting. Both are 65-watt TDP models but the 2700 packs in two more logical cores. To do that they had to sacrifice a little on the base clock for it. In most tests, the 2700 did still outperform the 2600 as you would expect, but there were a few tests, including a lot of the games tested, where the 2600 pulled ahead. These were situations that used all 6 and 8 cores enough that boost clocks couldn’t be used but were still dependent on clock speeds.

Now both CPUs ended up having good cooling performance when compared to Intel (there were some weird Ryzen to Ryzen results in there that I’m going to have to revisit). This was thanks to AMD sticking with a soldered heatspreader design where Intel has skimped and used low-quality TIM. Also, a big plus for both the 2700 and 2600 is that while they don’t have the X designation, they are both still overclockable where the competition likes to lock things down just to specifiK (get it) models. Both also have a low 65-watt TDP that makes them both ideal for small form factor builds. I’m actually building a new build right now where the limited space capped me at a 50mm or less heatsink (lower even than the stock AMD heatsinks) and with that no higher than a 65 Watt TDP. Speaking of heatsinks, both come with them, but the Spire included with the 2700 is a much nicer model. This means when building a PC you can save money and run the stock cooler for as long as you would like and from past testing I can tell you both of these perform well so no worries there.

On the downsides, with the 2700 the low base clock is obviously its biggest fault. But both CPUs also still leave room for improvement in the in game testing overall. Intel is still the best choice if this is your only focus and you want the best possible performance. But with 6 cores on the 2600 and 8 on the 2700, what Ryzen still has going for it is better performance when multi-tasking and in highly threaded applications.

Like the 2700X and 2600X review that I did previously, I wouldn’t recommend running out to upgrade to these if you already have Ryzen processors, though you could given they still share the same AM4 platform. In fact, if you look through the results, the 1600X and 2600 perform almost exactly the same in nearly every test. But if you held out, the new Ryzen CPUs are improved and in this case, you have a few lower TDP options. Where things get interesting is when you have to decide between the 2600 and the 2700. Frankly, I would go with the 2600X if given the choice in a build that the 95 Watt TDP isn’t an issue. But for SFF I would be going with the 2600, the higher base clock comes in handy. More importantly, the price gap makes a big difference. The Ryzen 7 2700 has an MSRP of $299 where the Ryzen 5 2600 is $199. But when you look at the performance gap between them, the 2700 doesn’t really justify that much of a premium, even with its extra two cores. Like I said the Ryzen 5 2600X actually outperformed the 2700 in a LOT of tests and it has an MSRP of $229. That is the sweet spot and includes the same Spire cooler as well. But for those SFF builds I’m Ryzen 5 2600 all the way. 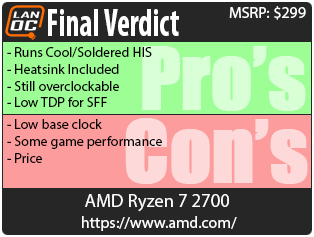 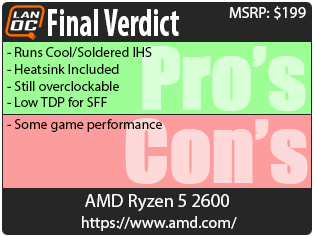 You might call him obsessed or just a hardcore geek. Wes's obsession with gaming hardware and gadgets isn't anything new, he could be found taking things apart even as a child. When not poking around in PC's he can be found playing League of Legends, Awesomenauts, or Civilization 5 or watching a wide variety of TV shows and Movies. A car guy at heart, the same things that draw him into tweaking cars apply when building good looking fast computers. If you are interested in writing for Wes here at LanOC you can reach out to him directly using our contact form.
Discuss this article
Log in to comment
Posts in discussion: AMD Ryzen 5 2600 and Ryzen 7 2700

We have 560 guests and one member online