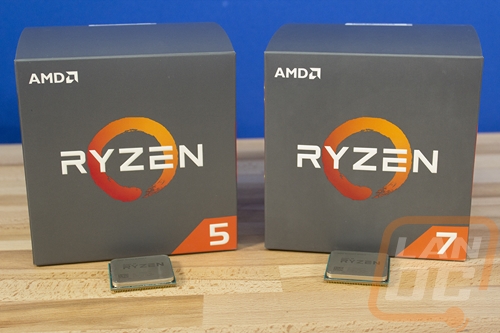 Just over a year and a month ago AMD rocked the PC market with the launch of their Ryzen CPUs. They started off with their 7 series CPUs then slowly introduced the others, the Ryzen APUs only just hit the market in fact. I say it rocked the entire PC market because the Zen-based CPU launch had a cascade effect across AMD's whole lineup that drove innovation forward from just about everyone. Building high-end PCs was new and exciting. The product shortages in memory and video cards have hampered things a little but hardware wise the past year has been amazing. AMD hasn’t left things alone, now that Intel has responded AMD themselves are ready with their Zen+ CPUs. They teased them last week and today's the day you can get them. Well I’ve been busy testing them and I can finally pull the NDA shaped tape off my mouth and talk about their performance.

So I think most of you know what Zen is beyond being part of the Ryzen name. It’s the architecture that makes up AMD's new CPUs. Well, Zen+ is the successor to Zen and what makes up the new 2000 series CPUs. At its core, Zen+ is a process improvement down to 12nm along with a few other changes. It's ironic actually that Intel dropped their Tick-Tock release structure and AMD basically picked things up right where they left off.

So in AMD's slide deck for this launch, there were a few interesting things. For starters, like I mentioned in our opening. The Ryzen launch has driven innovation including from Intel and AMD pointed this out showing that on the desktop side of things 4 core CPUs in the mainstream lineup has been the norm from Intel for 10 years until Ryzen launched where now Intel has 6 cores with rumors of 8. On the mobile side dual cores on thin laptops have been the norm until this year where quads are now finally being pushed into that market. They also talked about the 20 different Ryzen processors launched in 8 months and even though we didn’t cover all of those I can attest to the AMD launches making for a crazy year. Especially once you add in all of the new AM4 motherboards! 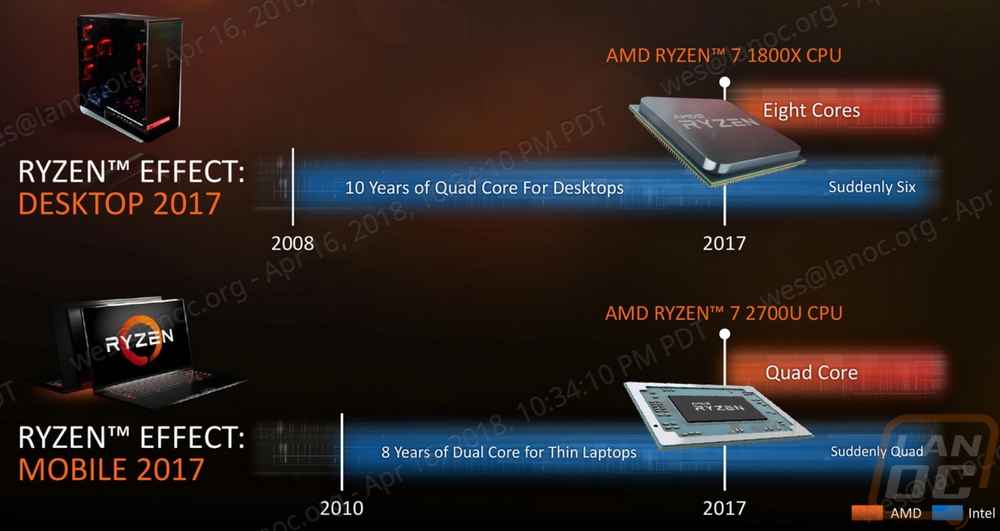 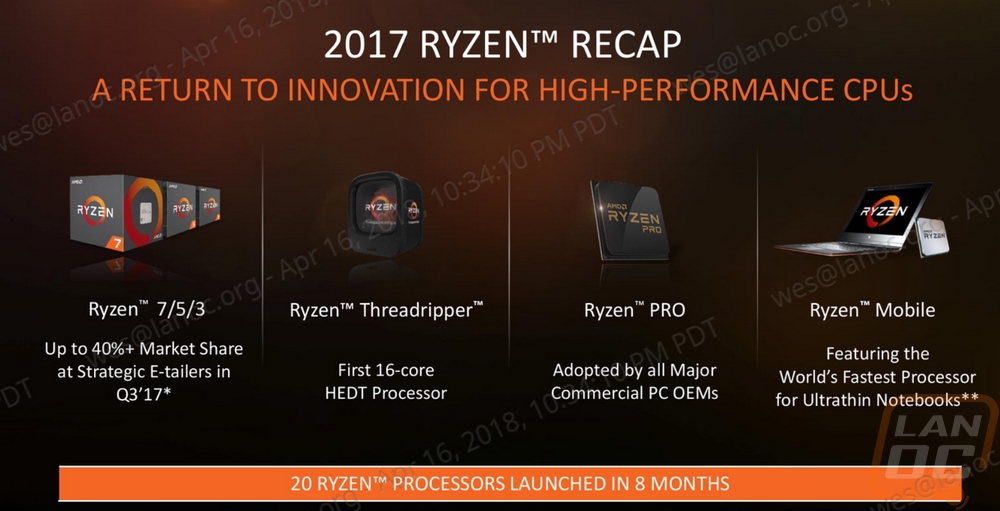 The other slide that I think people will be interested in seeing is the overall rollout plan for 2018. They show the Ryzen with Vega launches and this one. But Ryzen Pro Mobile is coming with Vega graphics, Ryzen Pro for desktop, and the second generation of Threadripper as well. It doesn’t look like 2018 is going to be any less crazy. 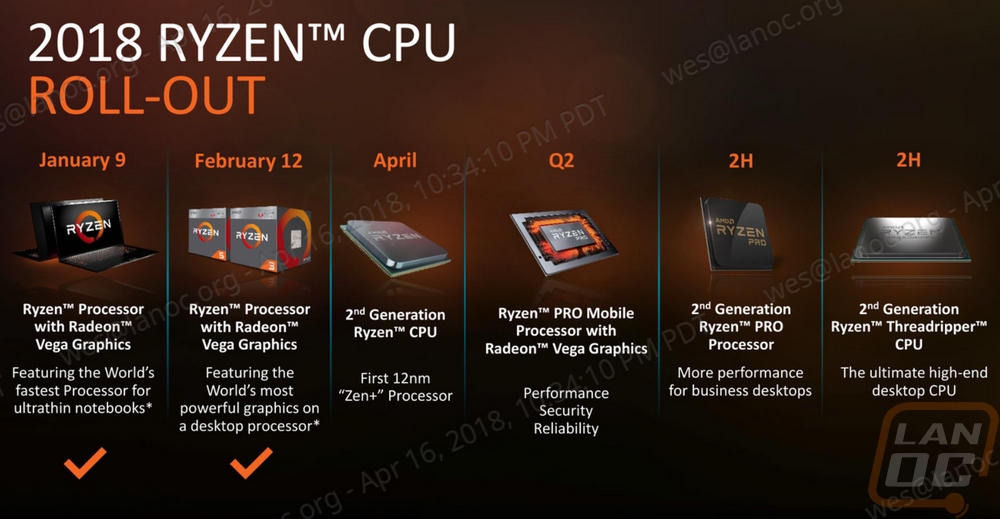 So what does the second generation of Ryzen have to offer? AMD broke things down a little. So these are the first 12nm CPUs on the market. Why is that? Well, Intel has been at 14nm and AMD was as well with the Ryzen launch. Intel decided to make their next step 10nm but has had hiccups along the way. Officially both the 14nm and 12nm shrinks are considered half-node shrinks. All together though die shrinks can lower latency by shrinking the distance between things, lower power usage and temperatures (make higher clock speeds possible), and lower costs as well. So Zen+ being on a smaller process is important, even with nothing else changed it should show improvements in all of those areas. You will notice all of those areas are touched on in AMDs deck. 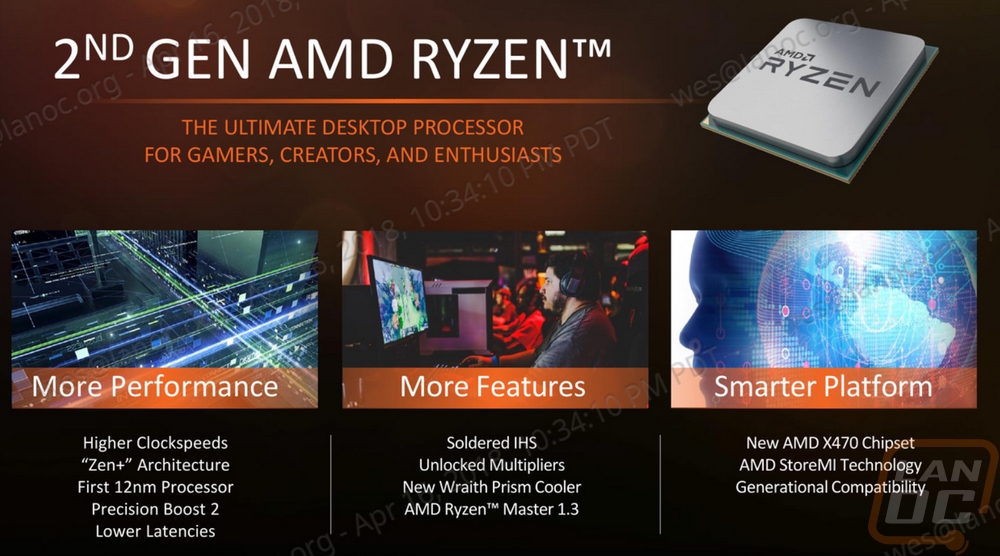 So what else is changed? Well like I said the 12nm node means lower latency and AMD is suggesting that we will see some big improvements there. This is exciting, especially on the memory because of how memory ties to the Infinity Fabric that brings all of Ryzen together. AMD is also using a new Precision Boost 2 that is part of their SenseMI tech that is going to change how boost clocks work. Before it was a 2 core or all core boost but now it is a linear scale. The graph down below shows how before there was a big drop in clock speeds when you use over 4 threads. Now it doesn’t have big drops so we should especially see better performance in that mid-range of thread usage and I’m guessing that is where a lot of everyday usage is.

Ryzen 1700xThis slide sort of gave the impression that AMD had improved on their already good soldered heatspreader design. After confirming with them, the design hasn’t changed. What they were pointing out here is that the competition still isn’t soldering theirs. Sure it costs more, but it offers a big improvement in cooling performance. I’m happy to see that AMD is continuing this again for this generation. 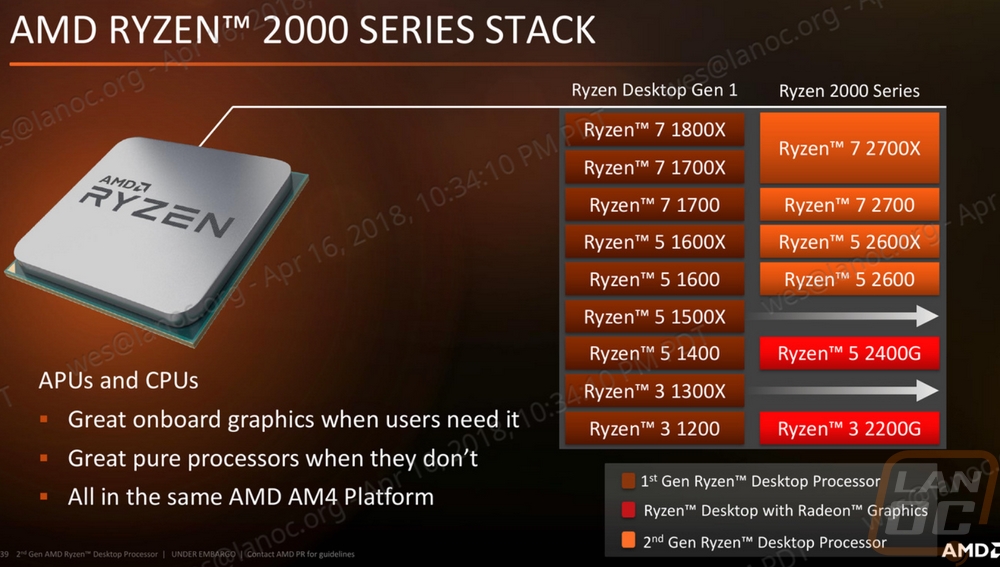 In addition to lowering the prices, the flagship CPU the 2700X now also gets a new heatsink where before the 1800X and 1700X didn’t include a cooler at all. Given how popular the Wraith coolers have been I think most buyers will be happy about the change. Not to mention they have brought out a new cooler called the Wraith Prism. The picture below makes it look like the original Wraith only with independently controlled RGB lighting for the ring, fan, and logo but they changed more than that. They have better memory compatibility now because the cooler is higher, the extra height should also translate to better cooling as well. They also have changed to a direct contact heatpipe design to help with the cooling as well.

With the new CPUs, AMD is also introducing the new X470 chipset as well. As you can tell from the slide this isn’t a big change from X370 at all. There are some improvements in power delivery to help handle the improved boost clocks and beyond that it's just an excuse for everyone to bring out new designs. As long as X370 owners aren’t upgrading for no reason I’m okay with the small update. New motherboards is a big improvement from AMD boards pre-Ryzen where you basically get a few boards for years with no updated versions for new technology.

We have 1382 guests and no members online