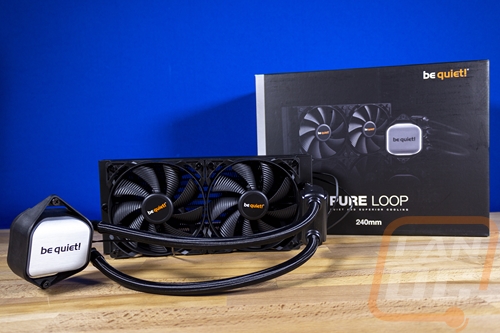 I came in excited to see what a company like be quiet! could do when finally getting into the all in one market and they didn’t disappoint. They avoided going with just the standard OEM setup with their branding on it. Especially on the pump side where they changed things up completely. The radiator is mostly like an OEM design with its aluminum design and it has the same fin spacing and thickness as any other AIO. Where it does stand out however is be quiet! supporting topping the coolant off in the loop with an easy to use fill port and them including coolant with everything. They suggest topping things off every two years and any other time it is needed and this should help a lot with the overall life of the system. Especially when paired with be quiet! fans which have an 80,000 hour expected life.

The pump design sticks with their quiet focus by not going with a pump in block design at all and moving it into its own container attached to the water lines. They call it their doubly decoupled pump and given how quiet the system was in testing, this and the fans did a lot. Of course, that inline design could also be in the way in some builds. I was also surprised that the block, with no pump inside, isn’t thinner. It ended up being thicker than some of the current AIO block designs with a pump in the block.

The Pure Loop is on point with the styling as well, sticking with the all blacked-out look that be quiet! is known for. They did have one exception on the top of the block where they put a fake brushed aluminum panel with their branding on it. It has white lighting around it as well. Which means RGB haters should like this design.

They have the Pure Loop listed with an MSRP of $94.90 in the states and I think its most direct competition is the Corsair H100x that also sticks with the white LED lighting. They are in the same price range, though I do think the be quiet! fans are a little better in quality. The AIO market is saturated, but it is a little refreshing to see someone getting into the market at this point and not just looking to add RGB all over the place and be quiet! is one of two companies that have a great chance of leveraging their already good fans for coolers like this. They have room for more on the higher end as well given they have their medium and higher-end fans as options. But that depends on how much of a market there is on the upper end of AIOs for people who don’t want RGB. 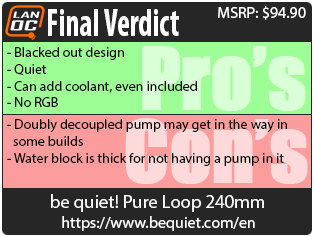 You might call him obsessed or just a hardcore geek. Wes's obsession with gaming hardware and gadgets isn't anything new, he could be found taking things apart even as a child. When not poking around in PC's he can be found playing League of Legends, Awesomenauts, or Civilization 5 or watching a wide variety of TV shows and Movies. A car guy at heart, the same things that draw him into tweaking cars apply when building good looking fast computers. If you are interested in writing for Wes here at LanOC you can reach out to him directly using our contact form.
Discuss this article
Log in to comment
Posts in discussion: be quiet! Pure Loop 240mm

We have 654 guests and one member online