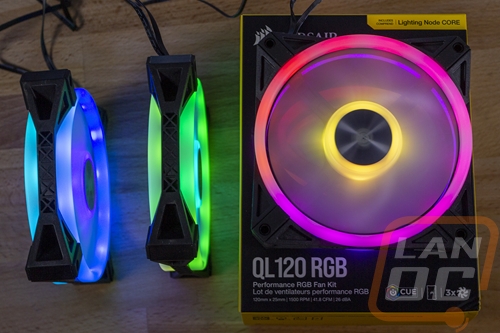 Just to break things down, the QL series has a few different options available. You have the QL120 and QL140 fans which are both available individually. The QL120 that I have here is the 120mm option as the name would imply and the QL140 is the 140mm fan. Both come in a kit form as well. The Ql120 kit is a triple fan kit that also includes the Lighting Node Core. The QL140 Kit comes with the Lighting Node Core as well but just two of the 140mm QL140 fans. You can also get the Light Node Core on its own as well. Today I’m looking at the QL120 RGB Kit, but almost all of the information still applies to the single fans and the QL140, only with the individual fans you will need a way to control them which includes the Lighting Node Core, the Lighting Node Pro, and the Commander Pro. The Core comes with a few of the Corsair cases as well and I believe if you already have one of their RGB water cooling kits the QL fans should work as well, though that would need to be confirmed because of the higher LED count on these fans.

So here they are, three QL120’s and like I mentioned earlier honestly at first glance you might just think these are their LL series aka the Light Loop fans because of the ring that runs around the fan. I will have to get in a little closer to show the differences, but I did want to point out that with the three fans pictures below you are getting 102 addressable LEDs across 12 different loops with these fans. The LL Series have 16 LEDs per fan, so less than half of the total addressable LEDs of the QL fans. 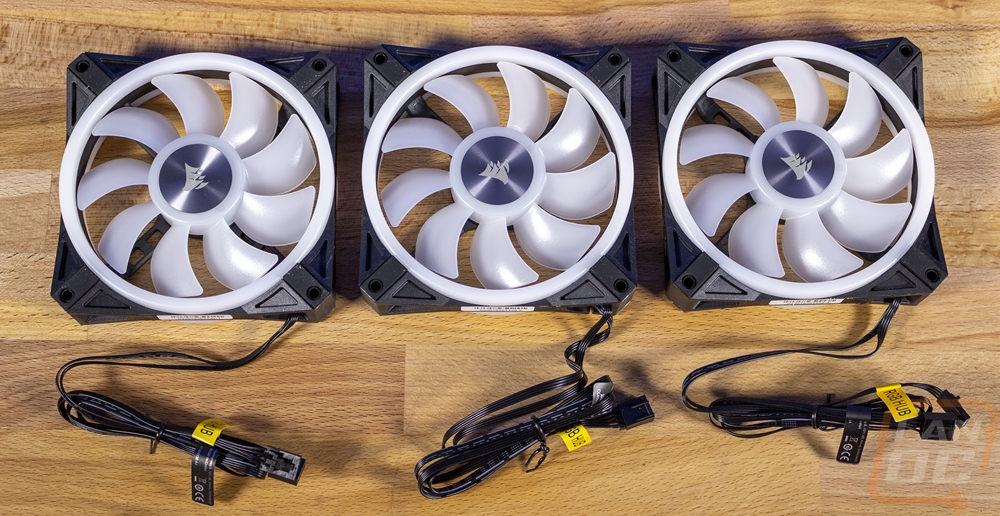 I’m actually going to start with the side profile view of the QL120 to show what is different in the fan housing. The LL120 has a traditional Corsair fan housing which is thick all the way around and with that the light loop isn’t visible from the side. For the QL series corsair thinned out black housing except on the ends where it attaches so you can now see the lighting from the side point of view. You can see both the top and bottom translucent rings.

So from the top, you can see that the light ring goes out basically to the edge because of the new design. The corners where the fan mount still has thick vibration pads however. Also if you haven’t seen some of Corsairs' recent RGB fans you will notice that the fan blade is also that same translucent white, that is because the center housing has its own LEDs as well that face out into the fan. So you end up with 12 addressable LEDs around the outer ring and there are four inside the front. Also new here is the center with the Corsair logo has a machined aluminum look. 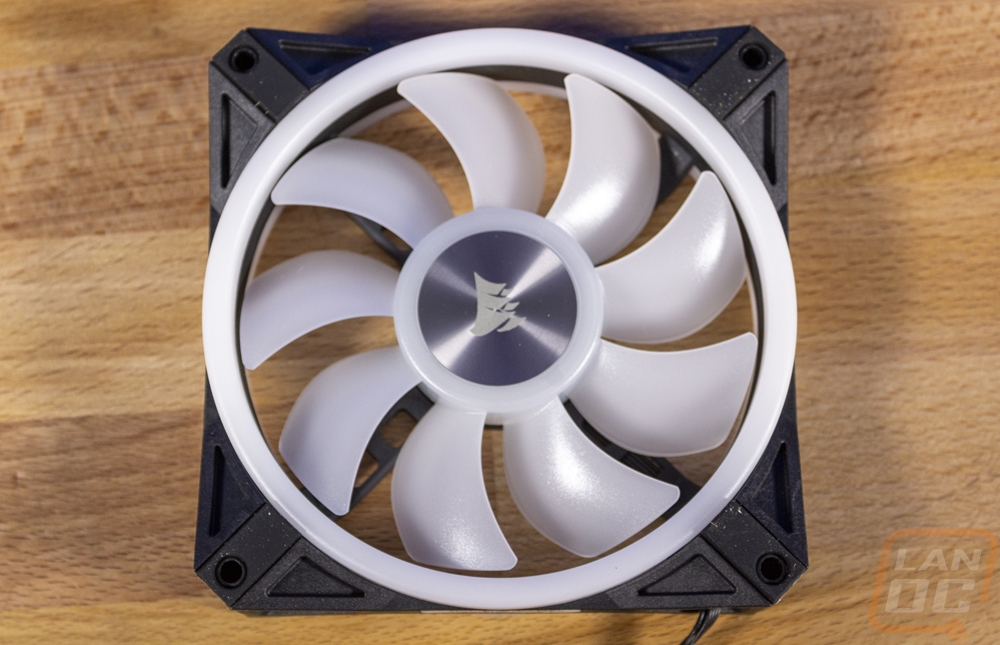 Now the back of the fan is where the big change has happened. With the LL series, the lighting was all on the front. Here the QL120’s have a second light loop on the back. The center still has to be supported so there is an X shaped bracket holding the fan motor but then there you will find another silver machined center and a second ring around that. The back of the QL120’s actually has more lights than the front with 12 on the outside again but 6 in the center, all individually addressable. 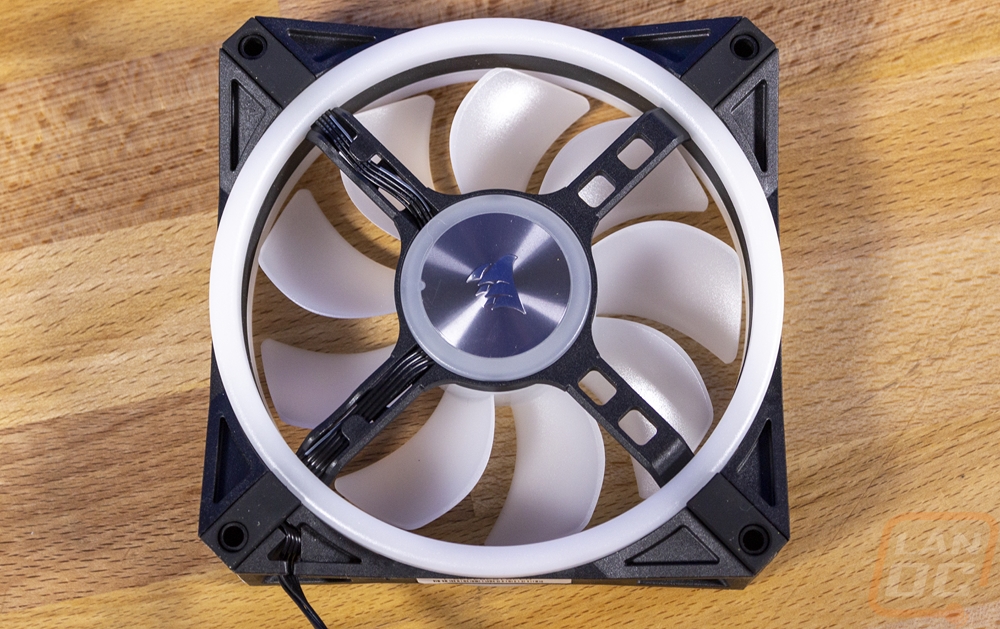 For connections, like previous Corsair RGB fans, the QL120’s do have two cables. Both are black and have a flat and flexible design. One is a traditional PWM fan plug to spin the fan and the other is a four-pin plug for the lighting. That one has a yellow tag to make sure you don’t get it mixed up. Both cables are 60cm long in total or just under 2 feet if you prefer that. 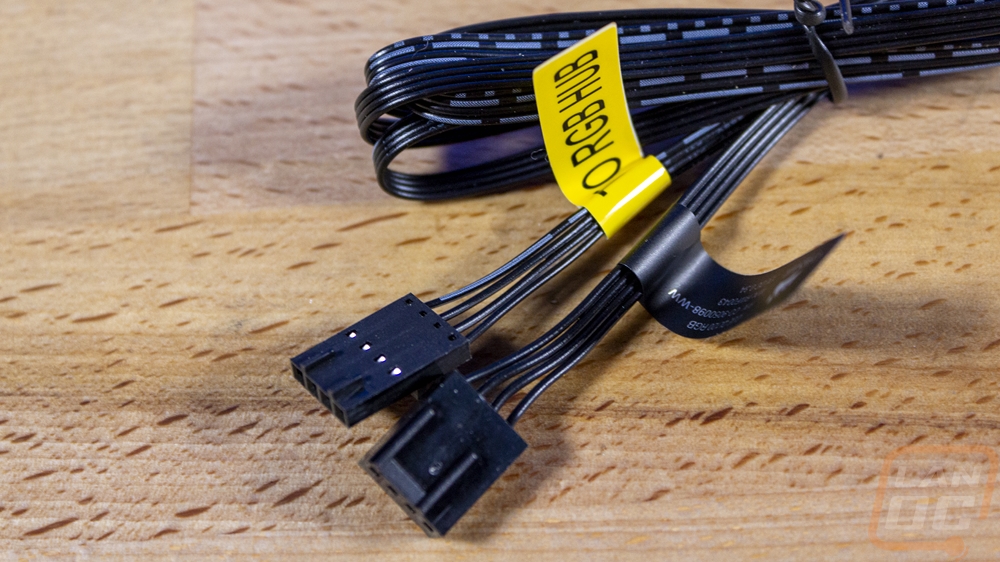 In order to control the three QL120’s included, the kit also includes the Lighting Node Core which is one of three controller options that Corsair has. Because the QL120’s have 34 addressable LEDs over the 16 of the LL series you do have to keep that in mind if you are using some of the other controllers like the Commander pro which can run up to 12 or 6 on the Lighting Node Pro when they are paired with the RGB fan hub. The Lighting Node Core has 6 total connections so you can add three more QL series fans and then it hooks up to your PC with a USB 2.0 connection and one SATA power plug. 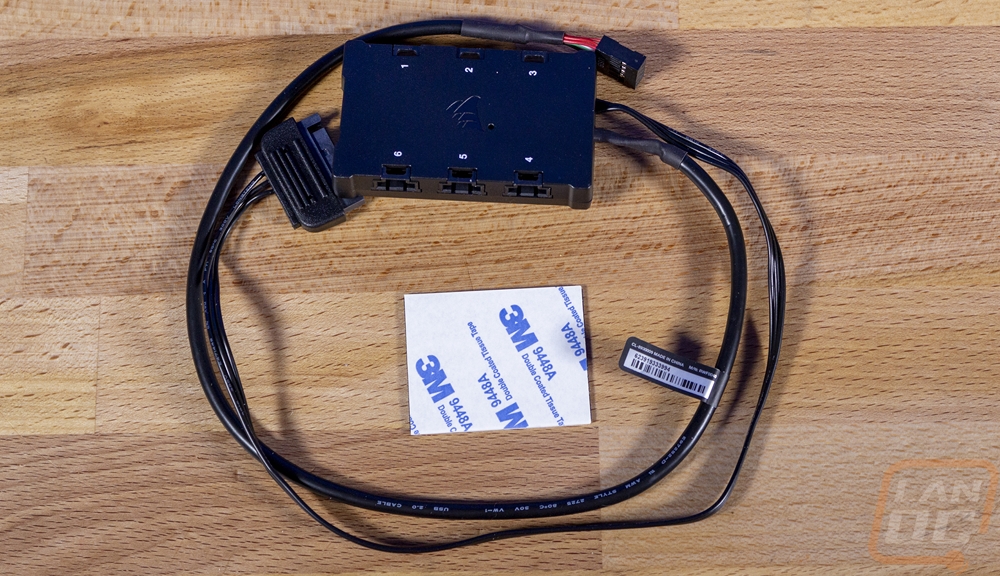 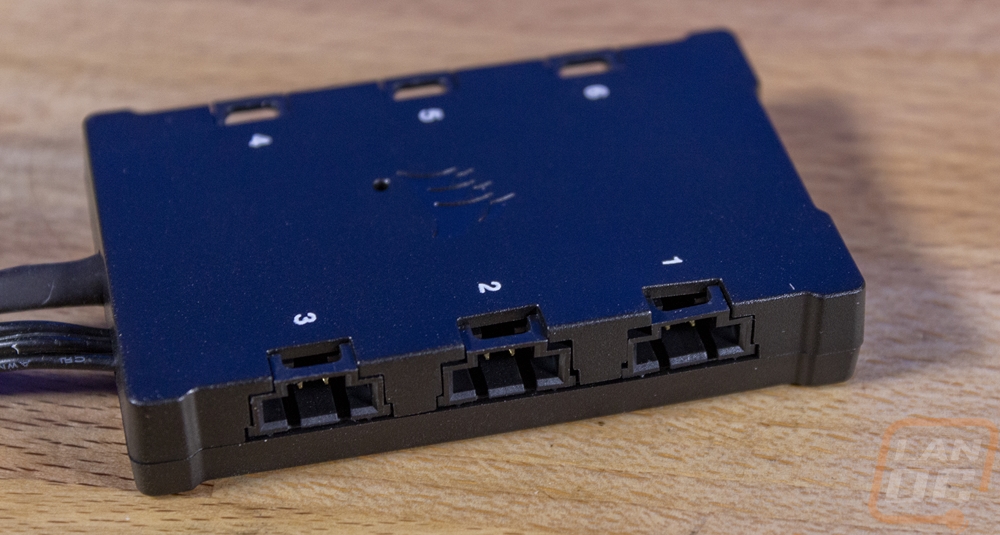