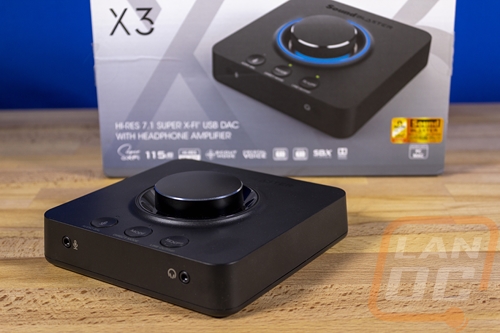 Even going back to my first PC gaming experiences the Sound Blaster name was important, most of you may not remember or were even alive at the time but old games would add sound Blaster support which was the best option for audio at the time. The brand and creative labs as a whole have continued to have that reputation and for good reason. They are always at or near the top of the game when it comes to PC audio. So going in I didn’t expect the performance of the X3 to be bad and it wasn’t. Out of the box without any of the features turned on it sounds great. It also ends up being well beyond a headphone DAC and is truly a full DAC for your headphones, microphone, and speakers. They also have support for multiple game consoles as well which is nice. Everything except the Xbox One that is.

I love the easy to use volume knob and this works a lot better than my X7. The X7 faced out at you but when you try to use any of the front controls it wants to slide back. Going with the controls on top avoids this and the X3 didn’t move around at all for me other than when I plugged in the headphones. The big knob has the LED right around it which helps make it visible and the quick push to mute was nice. The controls are simple with just three other buttons and you can flip between multiple EQs as well as each having a different profile depending on if you are using the headphones or your speakers. The compact design is nice as well when compared to the X7 (of course the X7 has an AMP as well). The one thing that the X7 does that I’m surprised wasn’t included on the X3 was its support for Bluetooth. The X3 even uses Bluetooth for full software control via an APP but you can’t stream audio to it. You do have the line-in on the rear, but Bluetooth for times you want to broadcast to your speakers would be nice.

Creative continues to impress with their Super X-Fi, though I typically don’t look for ways to add better surround sound performance into my setup. That is the biggest downside for me specifically with the X3. In my specific situation, it does more than I need or want it to do. I just need a headphone DAC/AMP, having additional line-ins, speaker or receiver audio connection options and all of the software is just stuff I won’t be using and in the case of the software can overcomplicate things. That isn’t to say those aren’t all great features though. That is just more to my specific needs. I also wasn’t a huge fan of the plastic enclosure for the X3, a lot of headphone DACs have a nice aluminum enclosure at a similar price point as the X3.

Speaking of pricing, where does the X3 land? It has an MSRP of $119.99 which is priced right in the middle of what you would expect for a DAC. Adding in the EQ options and the 7.1 stereo outputs help make it a better value if you can put them to use. The X3 is a great option to step WAY up from onboard audio if you aren’t using a USB headset and already have speakers. If you don’t need those options, like me, a cheaper $100 headphone DAC/AMP would be a better value. 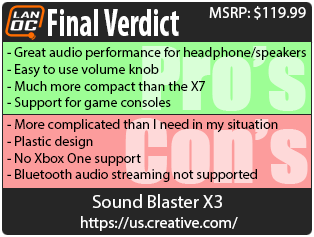 You might call him obsessed or just a hardcore geek. Wes's obsession with gaming hardware and gadgets isn't anything new, he could be found taking things apart even as a child. When not poking around in PC's he can be found playing League of Legends, Awesomenauts, or Civilization 5 or watching a wide variety of TV shows and Movies. A car guy at heart, the same things that draw him into tweaking cars apply when building good looking fast computers. If you are interested in writing for Wes here at LanOC you can reach out to him directly using our contact form.
Discuss this article
Log in to comment
Posts in discussion: Sound Blaster X3