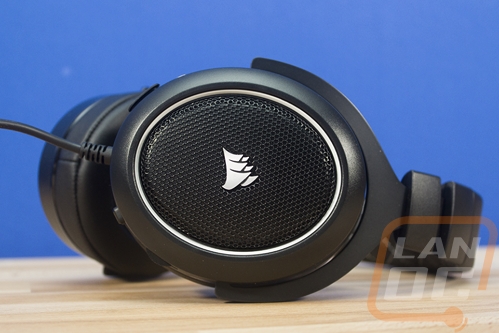 For testing, I focus on two main areas, audio quality, and comfort. Then I take a look at any other external performance things with the headset like volume controls, lighting, and quality. I spend at least 2 weeks with the headset and more whenever possible to get the best feel for it over a variety of situations. For the HS60 I’ve actually had this one on hand for a while and have been using it off and on for at least a month.

So to start things off, how was the overall comfort of the HS60? Well, the first thing I noticed was that the earcups fit well over my big ears. The padding is thick enough to keep the inside of the earcup off my ears and the padding din;t really touch my ears around the outside edge as well. So for comfort in that area, with nothing touching, I really only have to worry about heat. The open-air design helps a little with that, I still get really warm when gaming so I did have to pull an ear off from time to time, but it was about the bare minimum, normally I have to do it more often with other headsets. As for the headband, the traditional headband design isn’t actually my preferred style, I like a suspension design. To me, they feel lighter and spread any pressure out across the whole band. You can avoid this with really thick padding that is also soft. The HS60 has that thick padding, but it was still firm, so I could feel the top of my head right from the start and when gaming for extended periods of time I did move it around from time to time to keep it from hurting. To go with the earcup size, the headset, in general, fit my big head well with room to grow. I wanted more flexibility in a few areas, but as far as comfort goes that didn’t end up being an issue.

For audio testing, I tested both with and without the included sound card. For me I have an expensive X7 DAC already, I have no need for the sound card personally. So switching between them was noticeable, my DAC is much higher in quality and it showed in the performance. But that DAC also costs a LOT more than what the HS60 costs altogether, so comparing those isn’t fair. But I was impressed with the way the headset sounded when using my DAC. Switching to the USB sound card, the performance was actually not as bad as you might expect. The 50mm drivers help a lot to bring in some lows and things are responsive. I would compare these with the Arctis 3’s and put them a little below the Artctis 5 and Sennheiser GSP300’s that are both up in the higher sub $100 price range. I think for most people though, the HS60 is going to surprise you. Corsair went back to old school styling and old school sound quality. In game, sound was crisp and clear where it was coming from and I really liked them when watching movies.

Beyond the big two, I found a few aspects of the HS60 interesting. For starters, the overall feel is solid. They don’t squeak or flex when you move them around and the quality feels a few steps higher than what these are selling for. You still get standard faux leather on things, so don’t get me wrong this isn’t a $150 headset, but the construction is at least good. You cant say that for a lot of the gaming headsets on the market. I also really liked the mute button. It was easy to reach and because of how much it sticks out when unmuted you can tell right away with a quick touch if you are muted or unmuted. In line, buttons are never clear and Corsair managed to make it clear enough that you don’t need a status LED for it. The microphone also has a good amount of flexibility. It can’t wrap around behind you or complexly be pushed out of the way, but you are going to have no trouble making sure it is at least in front of your mouth. Of course, I can’t promise your team is going to want to hear what you have to say.