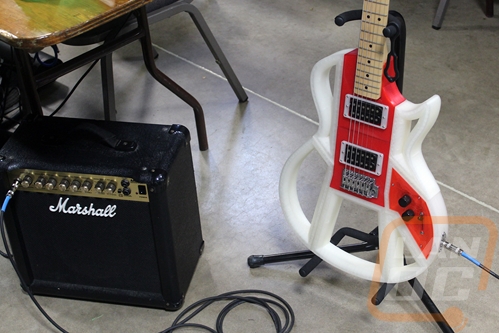 Well, this weekend I took a break from playing Ghost Recon Wildlands and made the trip over to Indiana to check out Midwest RepRap Festival. While the name most likely isn’t obvious to most people, but RepRap is the community around 3d printing. So unlike Maker Fairs where 3d printing is also very popular, this time the entire event is exclusively focused on it. This event started off as a small get together of friends in a garage and is quickly growing out of control. A few of the big names in 3d printing were there and we have the chance to stop and talk with a few people. We also brought the camera along so I figured I would make a quick post to share what we saw.

Even before walking into the event it was obvious that things were going to be a little crazy when even the parking lot was overflowing. Like I said over the past 5 years, the event has grown to the point where they are bursting at the seams. There was a short wait at the entrance to get our name badges then we were set to wonder around the room. We wanted to visit our friends at SeeMeCNC but that entire area of the building was packed so we started off wondering around. The entire event is filled with designers showing off their designs with companies showing off their hardware and software mixed in between.

The completely printed grandfather clock was especially eye-catching. I’m told they had 1400 hours into the project and while we were at the event I think we walked by the clock 10 times and each time we found different details that we hadn’t seen before 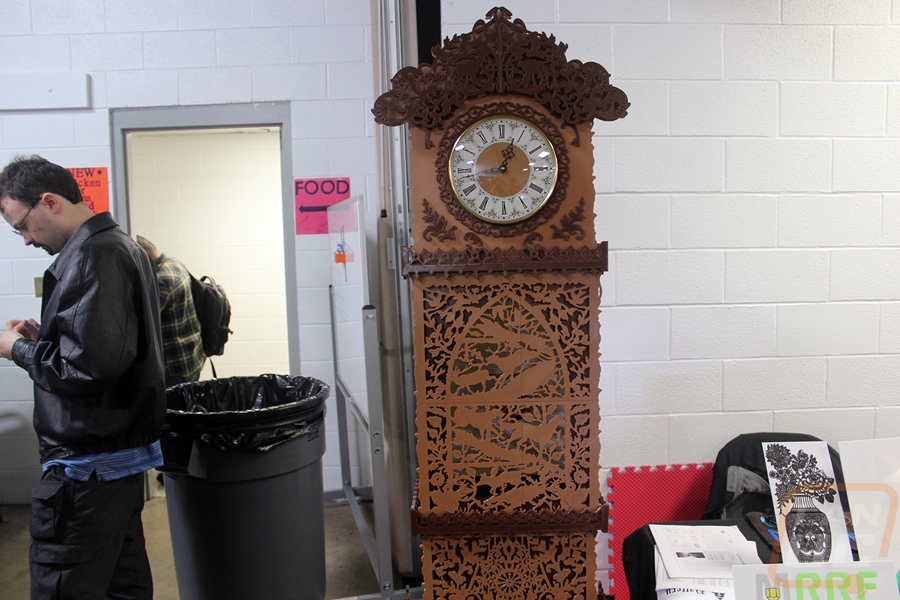 Printed Solid was also showing off a full sized Rick from Rick and Morty that had been community printed. 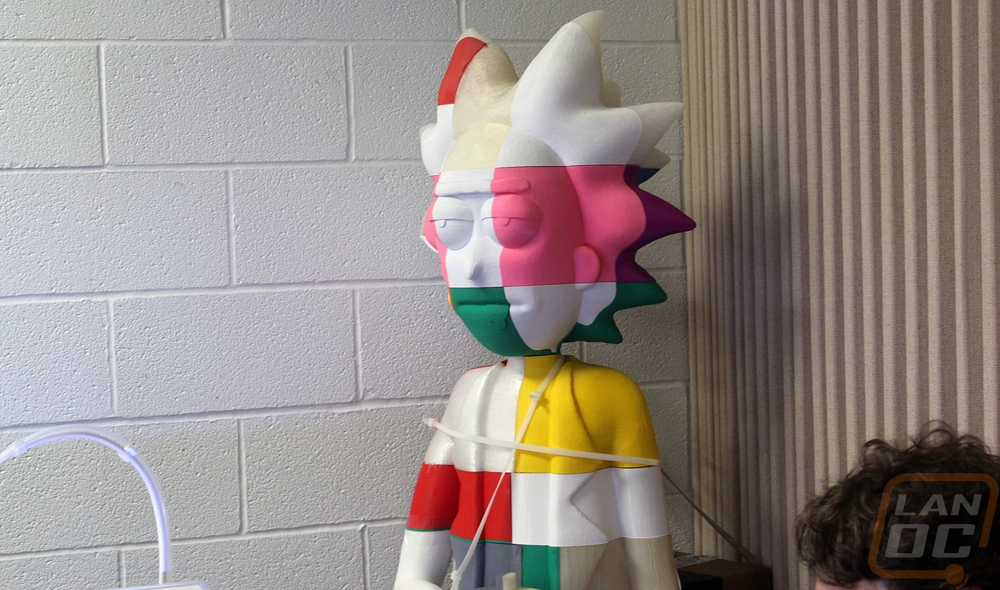 One guy had a table complete filled with gear designs that had been all printed as well. The table of gears would spin all at once and the other gear set had a crazy amount of reduction. 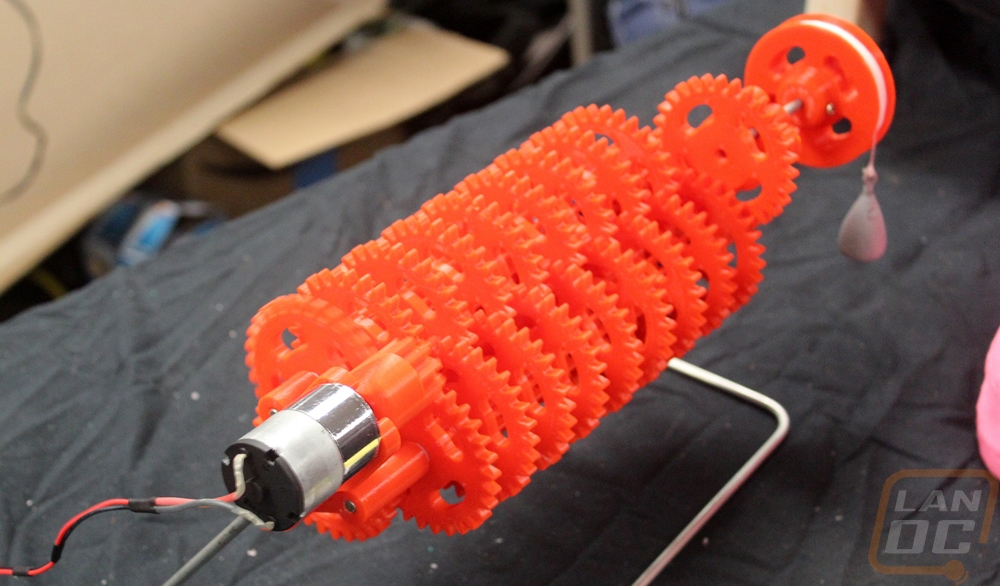 Abuzz Designs had a gear table design that was amazing, all it needs is a glass top, making me seriously envious. She also uploaded a lot of content on her channel from the event as well, you should check it out. 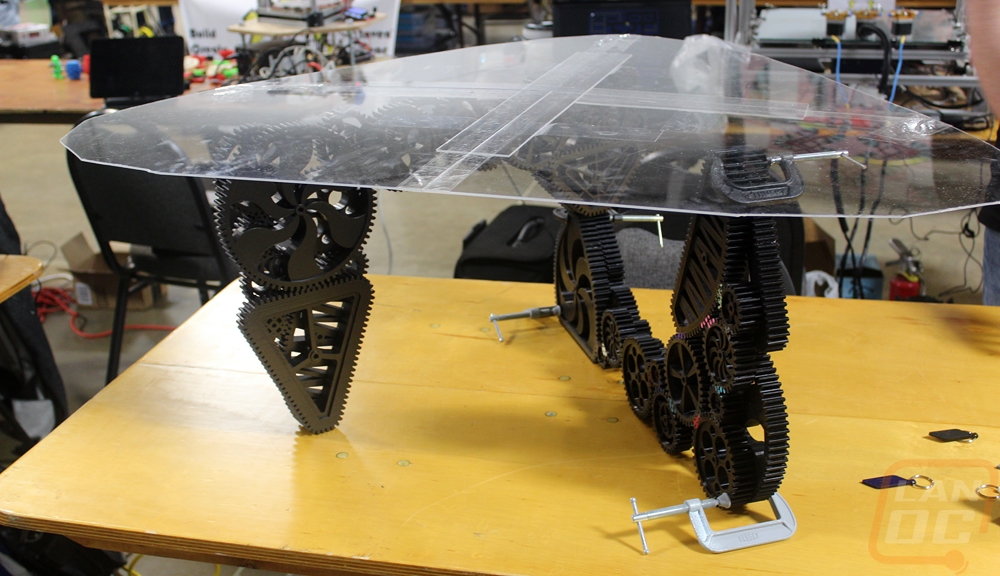 The completely custom printer designs all around the room were crazy as well. There was no way to capture them all but so many caught our eye. The crazy gear based spider looking delta(ish?) printer below may have been the craziest. 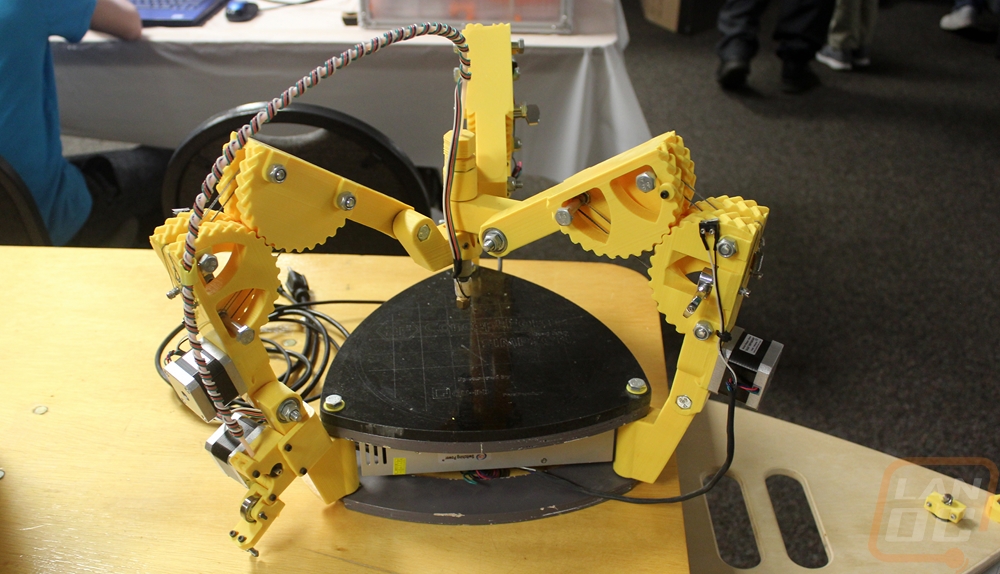 There were also room tall printers in multiple locations and even the obnoxious SeeMeCNC H2 with longer extrusions to be I think 5 feet tall from the H2 build off. 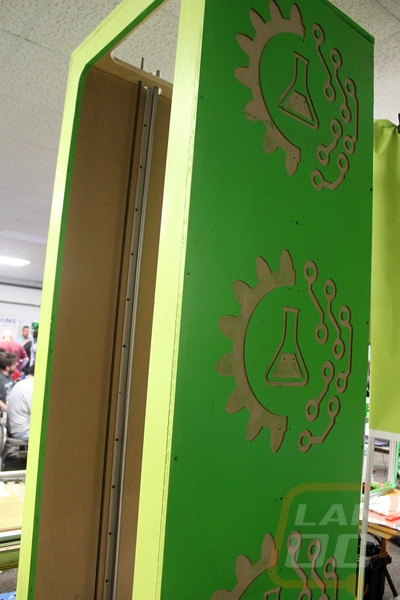 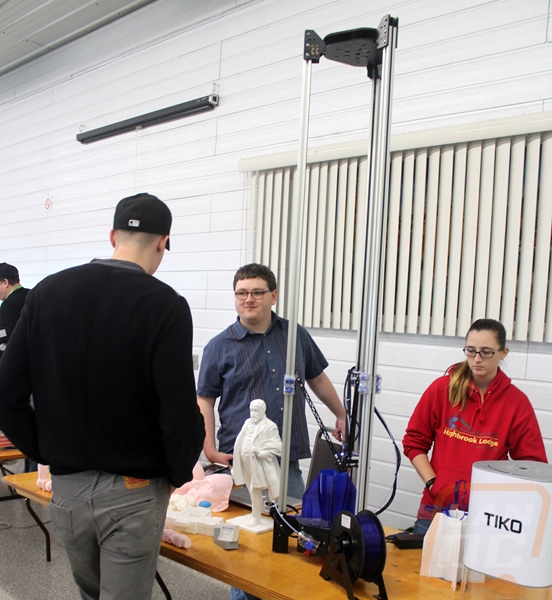 Speaking of crazy tall printers, SeeMeCNC also had their Part Daddy printer setup and running. All around their booth they had chairs printed by it. 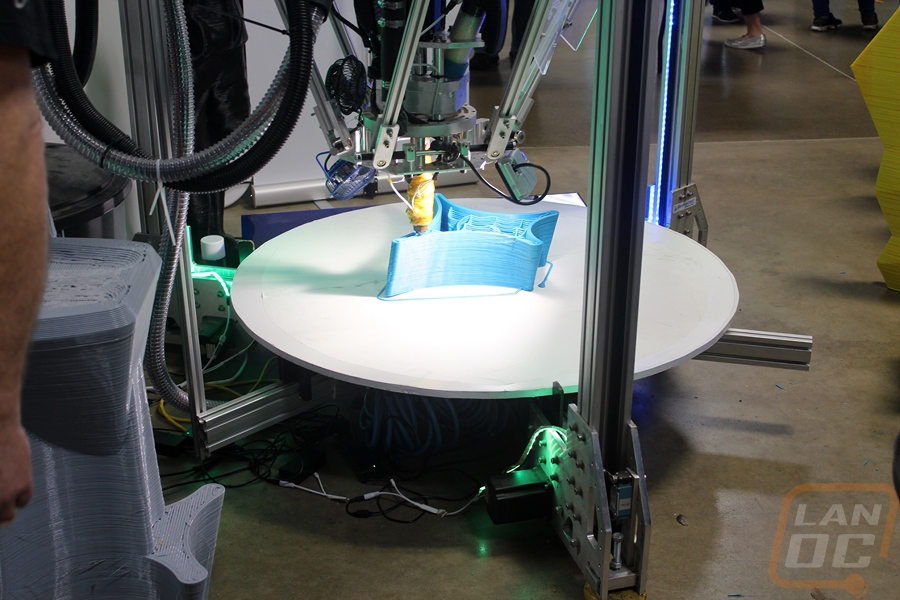 The event did expand over into a second building. Most of the space was taken up by people who got in on special SeeMeCNC H2 deals if they build their printer right there at the event. The entire building smelled of the laser cut pieces and brought back memories of building our Rostock MAX V3. Don’t tell my wife but it only made me want to build an H2 myself. 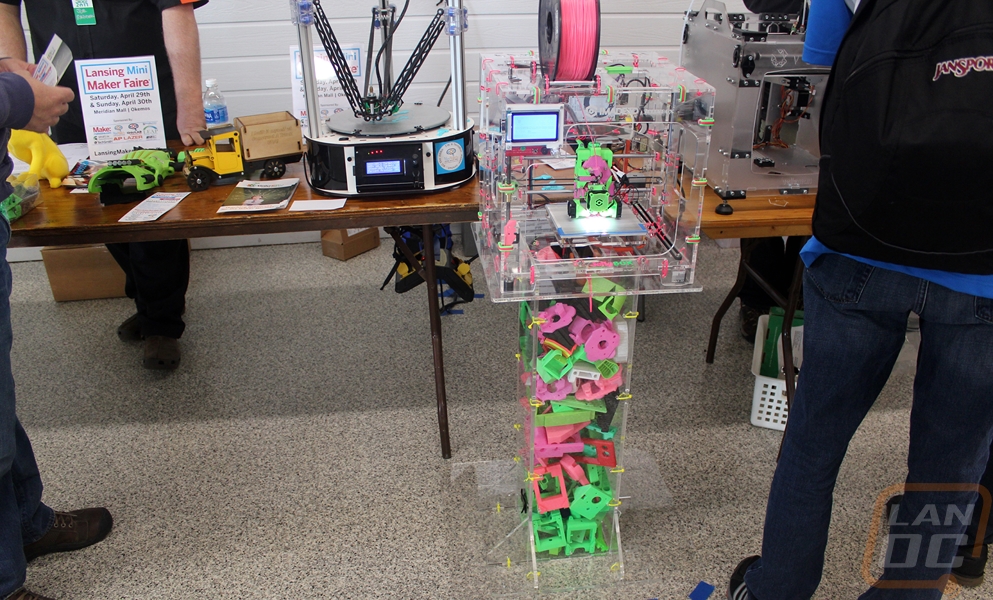 The crazy prints continued around the printer manufacture tables as well. SeeMeCNC had a whole collection of Open F1 RC cars, something I think I NEED to print this summer. They also had working violins and even this working electric guitar. 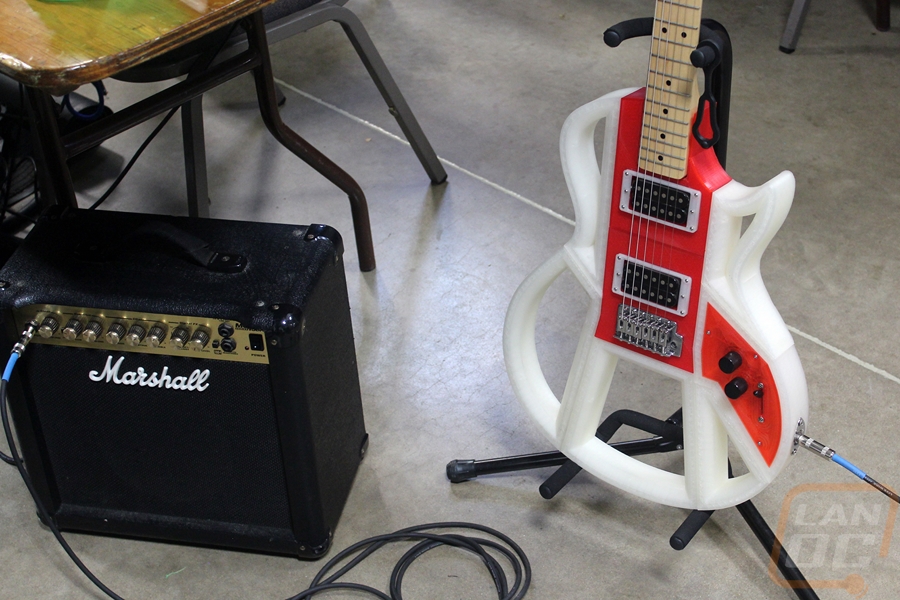 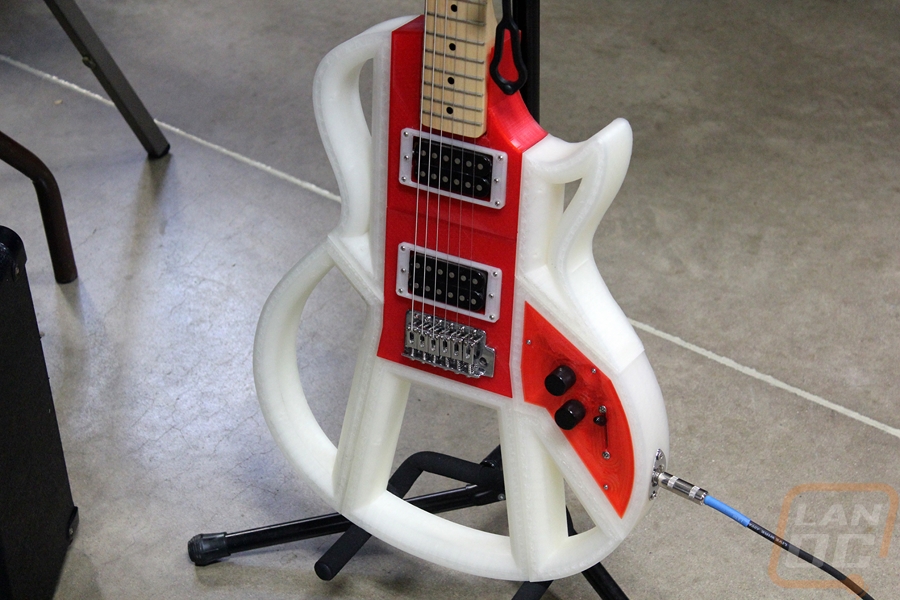 Matter Hackers was also at the event and I swung by their table but I couldn’t take my eyes off this amazing LS3 print. The entire engine was recreated. It had a fully functional bottom end and even a proper valvetrain that worked great.  Jim Carter printed it and had 218 hours into the print. 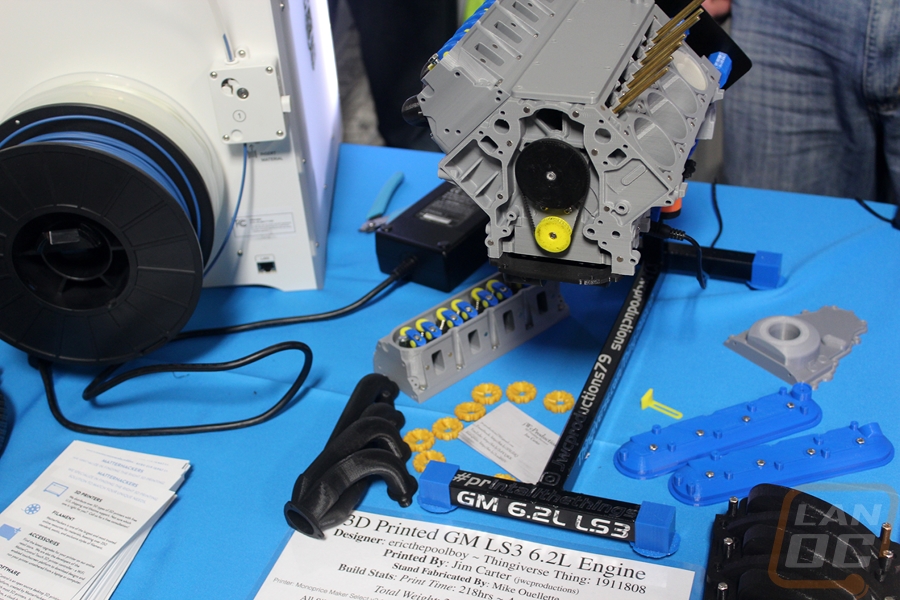 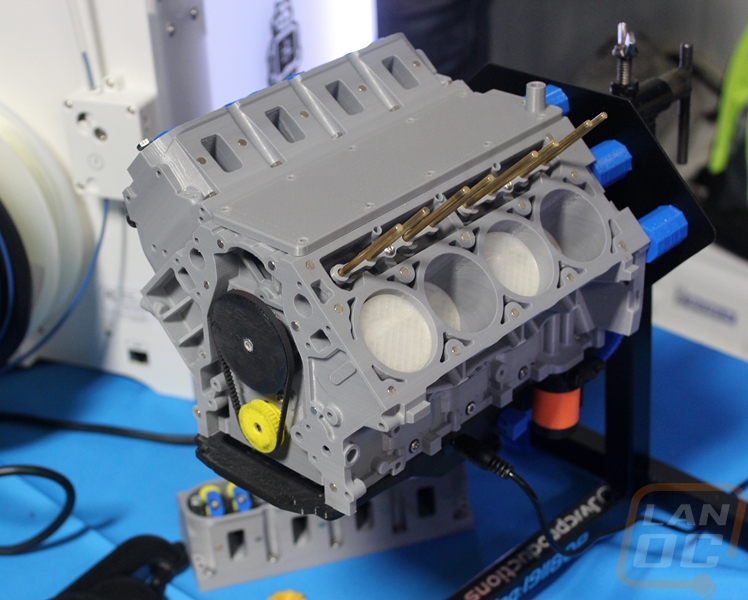 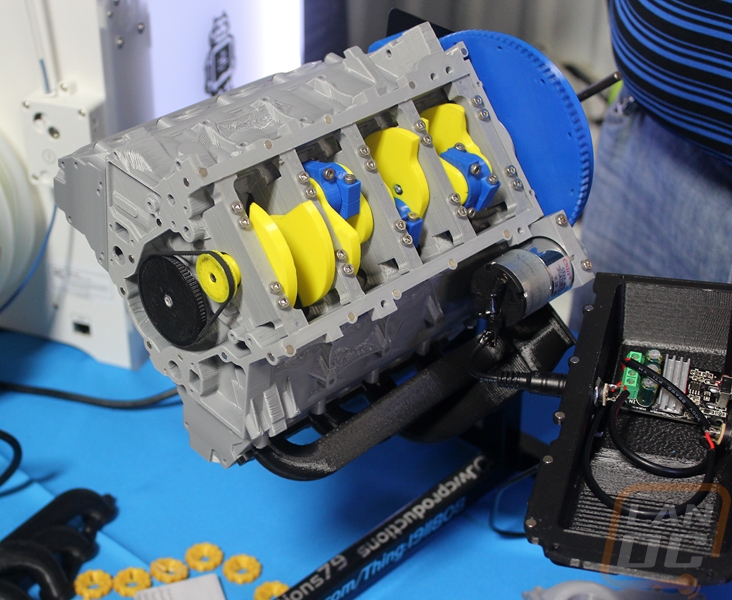 There were even a few hotend manufacturers including Micro Swiss showing off their hotend and all of their nozzles. Sadly they didn’t have any for my stock H280 on the Rostock Max v3, but they were showing off a wider range of nozzle sizes by printing down to crazy detail in these tiny prints.

Lulzbot was there with their Mini and Taz6 both setup, I didn’t have the chance to talk to them too much but both printers looked great. 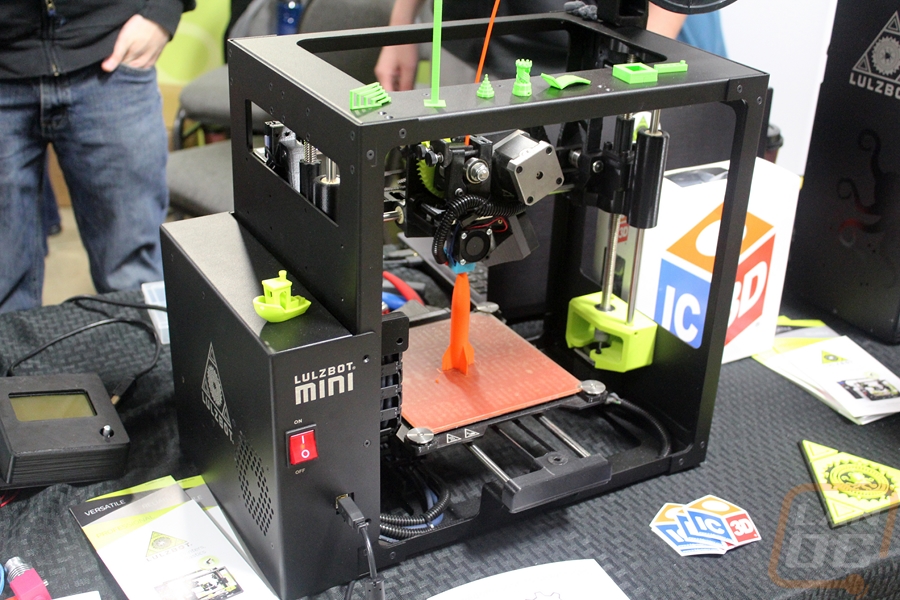 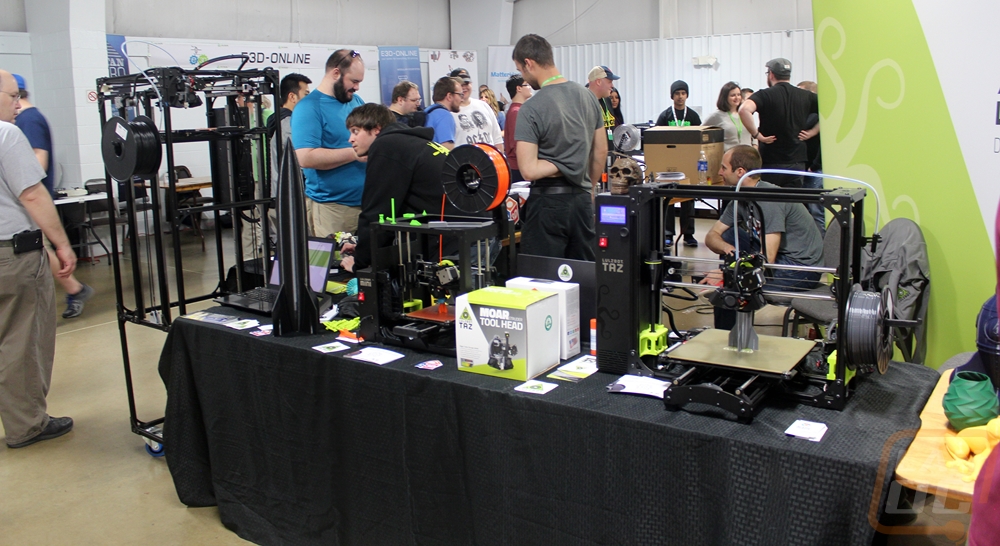 I also chatted a little with Josef Průša, designer of the Prusa i3 and later the Prusa i3 MK2, an extremely popular cartesian printer design. I would highly recommend anyone looking at printing to check out his printers over at his website. 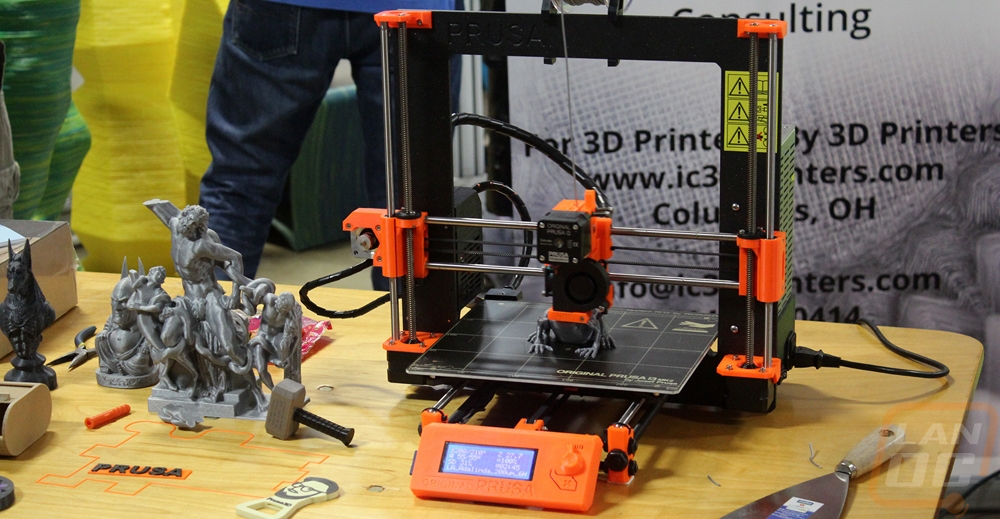 Before leaving I did stop by the SeeMeCNC area and we picked up some more filament. They also tossed their new Dual Extrusion setup at me so here soon I will be toying around with it and trying to print a few multi-colored prints on the Rostock MAX v3. God only knows why Alex would take this flattering picture of me though lol.

Beyond all of the makers, printers, software companies, and hardware companies there was also a whole list of popular YouTubers. I already mentioned Abuzz Designs but Barnacules was also there and 3D Printing Nerd. There were more but I didn’t catch them all. My wife was fangirling over Joel as we are both big fans of his content. All of them have a lot of event coverage including much more detailed looks at things at the event so keep an eye on their channels. Here is a list, all are great follows!

Overall I would call MRRF a success and both my wife and I had a great time even though we didn’t spend very much time there. Next year I think maybe we consider setting up a table or camping out with someone else. It would give us a place to rest. Of course, I need to get to work on all of the projects I have in my head to show off first. Big thanks to the MRRF staff and to everyone to made it out! If you are local and interested at all in 3dprinting, this is the event to check out. 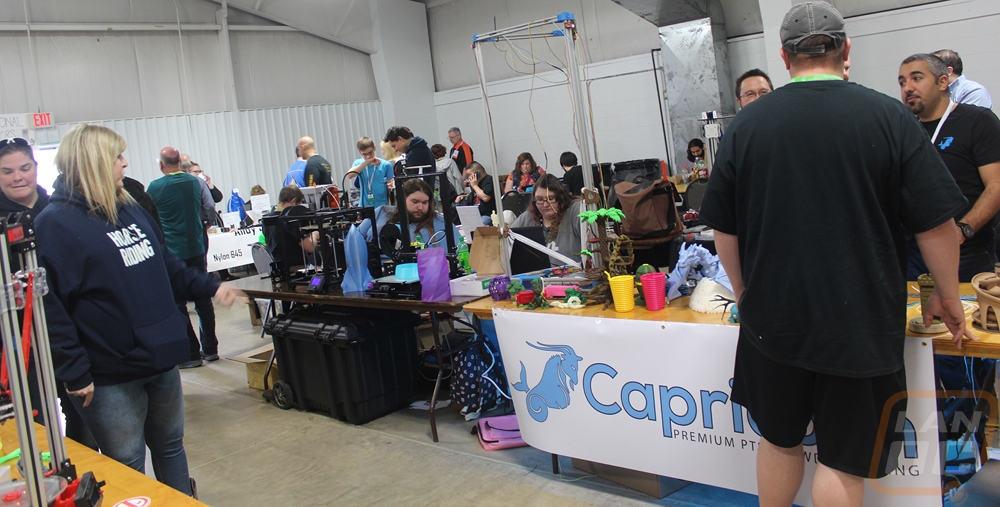 You might call him obsessed or just a hardcore geek. Wes's obsession with gaming hardware and gadgets isn't anything new, he could be found taking things apart even as a child. When not poking around in PC's he can be found playing League of Legends, Awesomenauts, or Civilization 5 or watching a wide variety of TV shows and Movies. A car guy at heart, the same things that draw him into tweaking cars apply when building good looking fast computers. If you are interested in writing for Wes here at LanOC you can reach out to him directly using our contact form.
Discuss this article
Log in to comment
Posts in discussion: Midwest RepRap Festival

We have 1452 guests and one member online